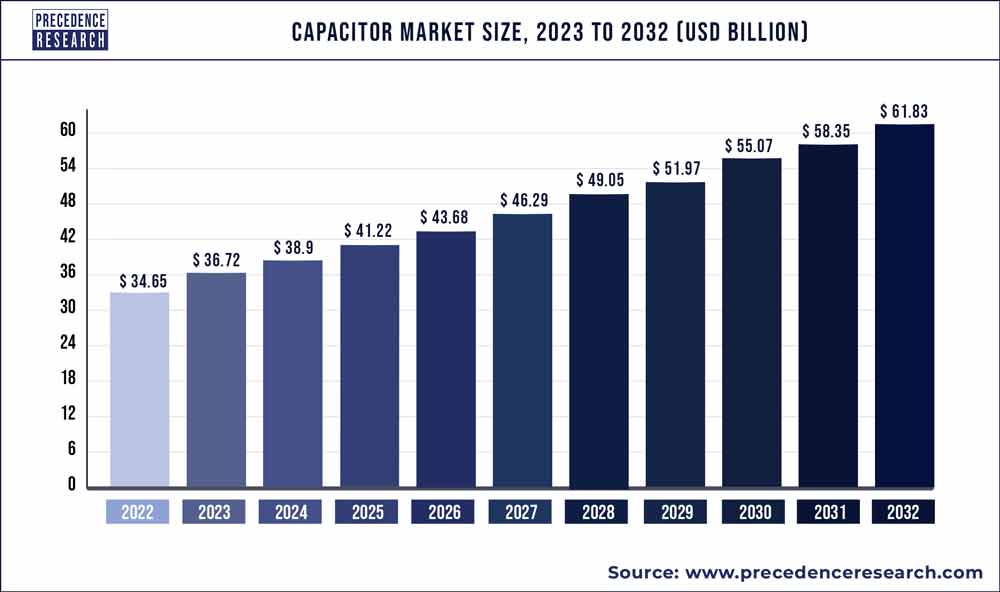 Market opportunities for capacitors have gone through several periods of development. The complexity and diversity of electronic device usage and increased consumer demand for premium players from emerging industry sectors will fuel the capacitor market growth. Business players are now choosing high-velocity and low-energy consuming products due to the advancement of creative activities in the consumer electronics sector, particularly across the cell phone segment.

Additionally, expanding organizations across ventures in the automotive and transmission & distribution (T&D) industries that require a blend of high capacitance and voltage will enhance the business outlook in the following years.

Report Scope of the Capacitor Market

The capacitor market is expanding due to the electronics industry's increasing demand for capacitors. This is due to the proliferation of devices with greater specifications that are being used more frequently. The global market for capacitors is expanding quickly due to the rising demand for tablets and smartphones and the affordable prices of ceramic capacitors. For instance, according to estimates, there will be approximately 6.6 billion smartphone users worldwide in 2022, representing around 4.9% yearly growth.

Additionally, LCD and LED televisions are increasingly incorporating capacitors. Electronic gadgets like computers, and televisions, among others, mainly drive the demand for capacitors, and manufacturers of high-end electrical devices employ capacitors more often. Global economies, businesses, and people's lives are all being transformed through electronic system design and manufacturing (ESDM). For instance, according to information provided by Invest India, India pledged to attain $300 billion in electronics manufacturing and exports by 2025–2026.

Capacitors are also being utilized more frequently in auto elements, including infotainment equipment, vehicle frames, and powertrain components, further increasing their popularity. Because capacitors can withstand the high temperature needed by control circuits, they are now used more frequently in electric vehicles. Therefore, the sum of these variables will drive the market for capacitors in the following years.

However, capacitors can continue to store energy and spontaneously produce a hazardous residual discharge even after the device has been de-energized. Liquid dielectrics or combustion byproducts from some capacitors could be toxic. Arc faults are made when high-voltage capacitors have metal or dielectric connection issues. The dielectric fluid vaporizes in oil-filled units, leading to case bulging and breaking. Thus, many capacitors can produce weak X-rays while operating normally. These factors put both people and the ecosystem in danger. Due to the probable adverse consequences of capacitors, the market will face challenges soon.

Nonetheless, the capacitor industry is developing potential due to the rising demand for electric vehicles. In electric vehicles, a capacitor is mainly used to improve the stability of the DC bus voltage and avoid ripple currents from going back to the power source. Batteries are used in electric vehicles (EVs) to power them and for decoupling and preserving semiconductor components. They also protect EV subsystems from voltage surges, electromagnetic interference, and peaks by serving as filters.

The outbreak and widespread COVID-19 led to the closure of manufacturing facilities in 2020, significantly impacting export-oriented economies. The deployment of 5G base stations, the production and introduction of new electric vehicles, and the advancement of connected vehicles all experienced delays, which impeded the growth of the capacitor industry.

Additionally, in 2021, COVID-19 caused procurement and supply delays. For instance, the increased demand for multilayer ceramic capacitors from the electronics and telecommunications end-user industries, nonetheless, after the ease of the pandemic crisis's unfavorable impacts on the expansion of the capacitor industry in late 2020 and early 2021.

The adoption of work-from-home regulations across the globe increased demand for gadgets such as laptops, cellphones, computer printers, smart wearables, healthcare equipment, webcams, and headphones, which boosted the demand for capacitors in the telecom sector. Furthermore, the COVID-19 outbreak made it challenging to source raw materials.

Government-funded transmission and distribution projects were hampered due to the closure of several governments' financial streams. As a result, there was less of a need for capacitors. Government-funded transmission and distribution projects started operating when the economies of several nations recovered.

These circumstances led to the conclusion that the worldwide capacitor market's growth stagnated rather than declined throughout the pandemic period. However, it is anticipated that the market will expand beyond COVID-19.

The capacitor market is divided based on type into ceramic, film/paper, aluminum, tantalum/niobium, double layer/super capacitors, and others. Due to the growing popularity of the internet of things (IoT), ceramic capacitors are anticipated to hold the most significant market share in 2022. In the creation of IoT systems and devices, MLCCs are essential. Sensors are utilized by many IoT devices to gather data, and the circuits that power and regulate these sensors frequently include ceramic capacitors.

IoT devices communicate data using wireless communication technologies, including Bluetooth, wi-fi, and cellular networks. Additionally, ceramic capacitors are used to store and regulate the power supply in the power management systems of IoT devices, assisting in maintaining a stable power supply for the devices. As a result, it is projected that the demand for ceramic capacitors in the industry will grow rapidly, considering these reasons.

Industrial, automotive, consumer electronics, energy, and other segments make up the global capacitor market. Due to the significant manufacturing of electronics such as cutting-edge computers, mobile phones, TVs, and defense-related gadgets, the consumer electronics market is growing swiftly. The market environment requires manufacturers of capacitors to stay current with cutting-edge technology because these attributes are crucial when selling to higher-income groups.

In 2022, the North American region will continue to dominate the global capacitor industry. The development of ultra-small case-size capacitors for portable electronic gadgets and the rising production of electric vehicles have ramped up growth in North America.

In contrast, the Asia Pacific market is anticipated to increase due to the region's growing automotive sector. Due to the rapid expansion of their electronic industries, India, China, and Japan are the top three revenue-producing nations in the Asia Pacific. India is the country in the Asia Pacific region that consumes the most electronics. However, due to growing vehicle sales and robust urbanization, China is determined to lower car exhaust emissions. 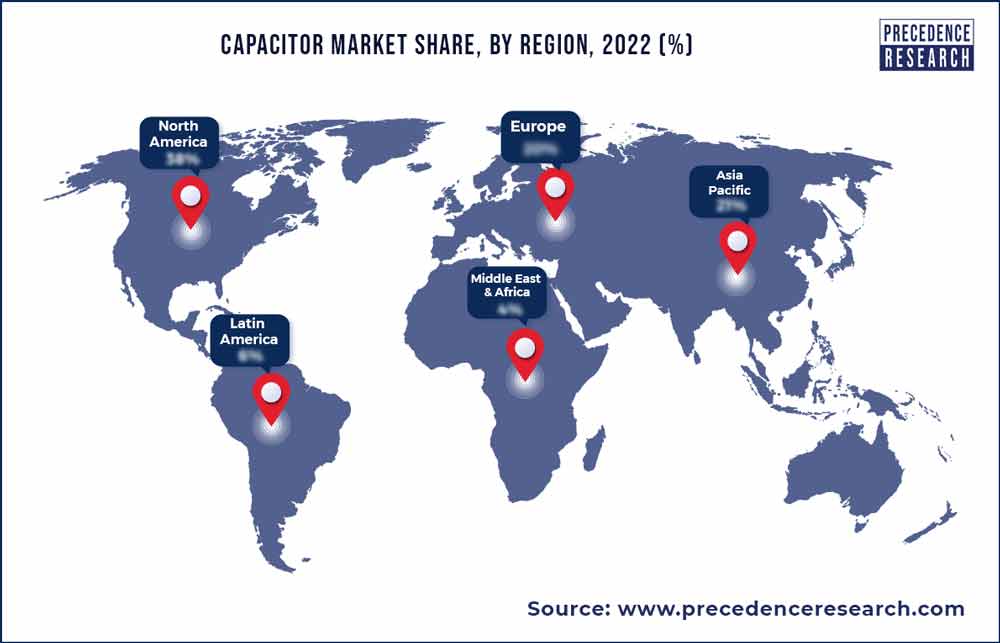 The country's aim to reduce its reliance on oil imports would increase demand for electric vehicles, increasing the market for capacitors. Growing government rules promoting the use of electric vehicles and aggressive development plans by regional OEMs and suppliers to meet increased demand from China's automotive industry are anticipated to enhance market growth for the projected period. For instance, the Chinese government promotes the use of electric automobiles.

To encourage the sale of electric vehicles, the Chinese government has invested in the construction of charging stations all around the nation. For instance, the Chinese government declared plans to construct sufficient charging stations for 20 million electric vehicles by 2025 in January 2022. As a result, the abovementioned factors drive the Asia Pacific capacitor market.