Demand for e-bike remains strong in 2021, despite of the pandemic outbreak in 2020. Some sales insight revealing the strong growth of e-bike during the past few years are listed below: 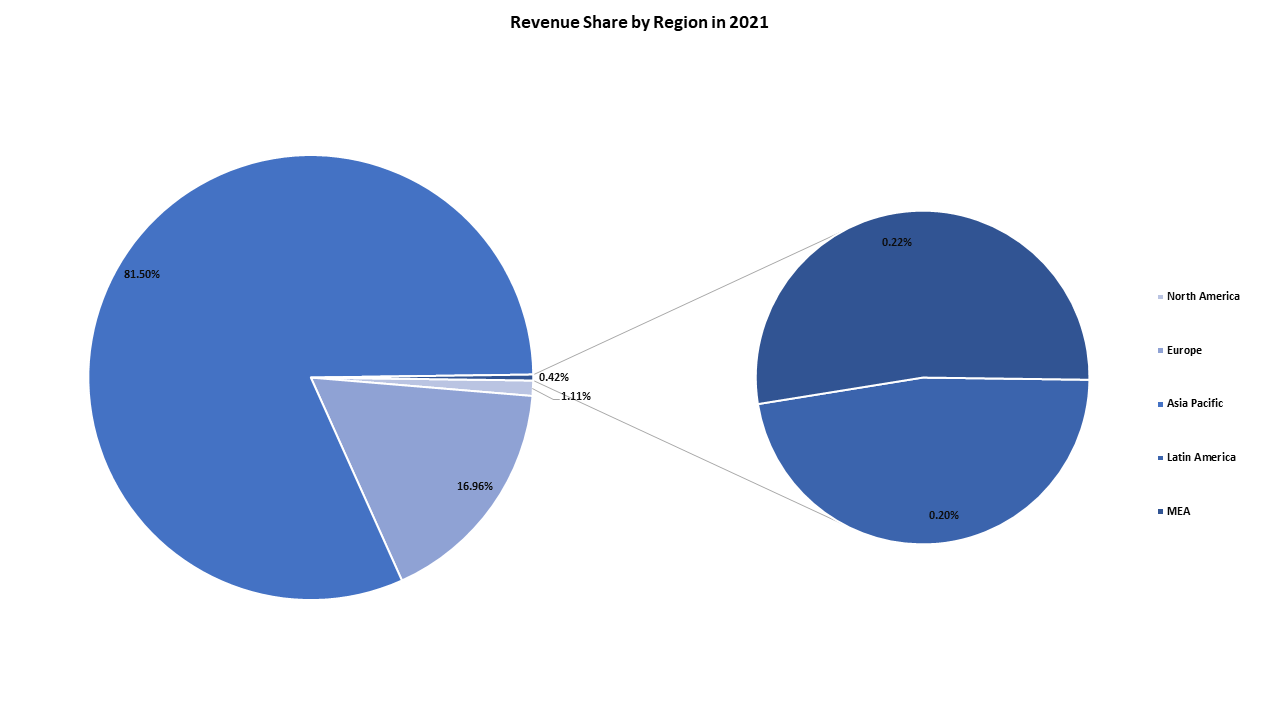 70% of the Global E-bike Market Captured by Mainland China

China has solidified its market position in the electric mobility market with leading position in both electric cars and electric bikes sales. According to Precedence research, China captured nearly 70% of the global e-bike revenue in the year 2020 and projected a strong growth of 9.11% during the analysis time frame (2022-2030). China Motor World states that total production of e-bike in China accounted more than 30 million in the year 2018.

Additionally, China accounted for more than 90% of the market share in the Asia Pacific region owing to significant trend being adopted for the adoption of electric mobility along with shared mobility in the country. For instance, e-bike sharing initiative in the country accounted as the major driver for the sales growth of e-bike in China. Beijing is prominently adopting shared e-bike trend with an increase of 200% in the bikeshare rides in 2020. Further, the trend anticipated to rise at an unprecedented rate owing to increasing awareness for shared and environment-friendly mode of transport.

“Quote: Increasing trend and adoption rate for bicycles as an eco-friendly mode of transport across the world plays a major role in propelling the market for e-bike in the upcoming years”

Some Key Stats on Bicycle Demand and Adoption Rate

Middle East & Africa is still at its early adoption phase in the e-bike market and garner the highest CAGR of 15.40% during the forthcoming years. The prime factor driving the regional growth are rising investments for the development of transport infrastructure along with increasing initiatives for promoting e-bike adoption. For instance, the Executive Council of Dubai revealed a new “Bicycle-Friendly City Strategy 2025” with an investment of US$ 108.88 million that will enable flexible means of transport in the city. Again, in December 2019, PBSC Urban Solutions, a Canada based smart bike-share solution provider announced to enter into a partnership agreement with Careeem, a leading ride-hailing company based in the Middle East, to launch e-bike sharing service in UAE. As per the agreement, the company will provide 3,500 e-bikes and 350 smart stations in the country. Hence, these initiatives in the region expected to bolster the demand for e-bikes and thus its components in the region.

E-bike industry in Latin America region is primarily driven by the rising trend of bike sharing system and other forms of micro-mobility. For instance, a bike sharing startup in Brazil, Yellow, introduced a dockless e-bike sharing scheme in Brazil. Another bike sharing platform, Bike Sampa that is operated by Tembici and sponsored by Itaú bank have 20 e-bike in their sharing scheme and plan to extend it in the region.

Apart from bike sharing systems in the region, safety of the drivers is the other major concern that drives the market for e-bikes in the region. More than 40,000 deaths occur every year related to traffic in Brazil. In wake to cut the number of deaths in the region, the government is significantly supporting the adoption of e-bikes and other green mobility solution in the region. For the same, they have also broadened the bicycle lanes in order to improve safety and reduce congestion on road that is one of the major concerns for road accidents.

The global e-bike market is highly fragmented owing to the presence of large number of regional as well as global players. For instance, some of the leading e-bike peddlers brand in the North America includes Prodecotech LLC, Accell, Pedego, Sonders, Jetson, Trek, Specialised, Green Power, and many others. Among the above listed companies, Prodecotech capture around 14% of the total revenue share in the North America e-bike market and anticipated to grow at an accelerating rate over the forecast time frame.

E-bike is a niche market and numerous small and large players are present in the global e-bike market. Despite none of the players dominate the global e-bike market that increases the level of competition among the market participants at a significant rate. However, some of the market players that capture notable revenue share or comparatively larger revenue share includes Giant Bicycles, Trek Bicycle, Yamaha Motor Co. Ltd., Xinri E-Vehicle Co. Ltd., Accell Group, Derby Cycle, and others.

Giant Manufacturing Co. Ltd. held the largest revenue of more than US$ 1,500 million in the year 2021. The company not only design and manufacturers its own bike, but also manufactures bicycles for the major cycling brands that includes Scott, Colnago, and Trek. Being a market leader in global bicycles market, expected to project a booming growth in the e-bike market as well.

The market faces stiff competition by small or regional operating players that affects this revenue growth and market foothold on the global scale. Whereas, rising trend for motor equipped or throttle e-bike expected to spur the demand for high power electric motors in an e-bike designed by Bosch, Shimano, Mahle, Giant, Yamaha, and many others.

Analyzing the market growth for e-bike during the forthcoming years, some of the drive unit manufacturing companies have forward integrated their manufacturing scale and entered into e-bike manufacturing market from its manufacturing business. This trend also expected to boost the rate of competition among the industry participants. Hence, the global market for e-bike is highly competitive and opportunistic that guides the development path as well as growth prospects of the industry in the near future.