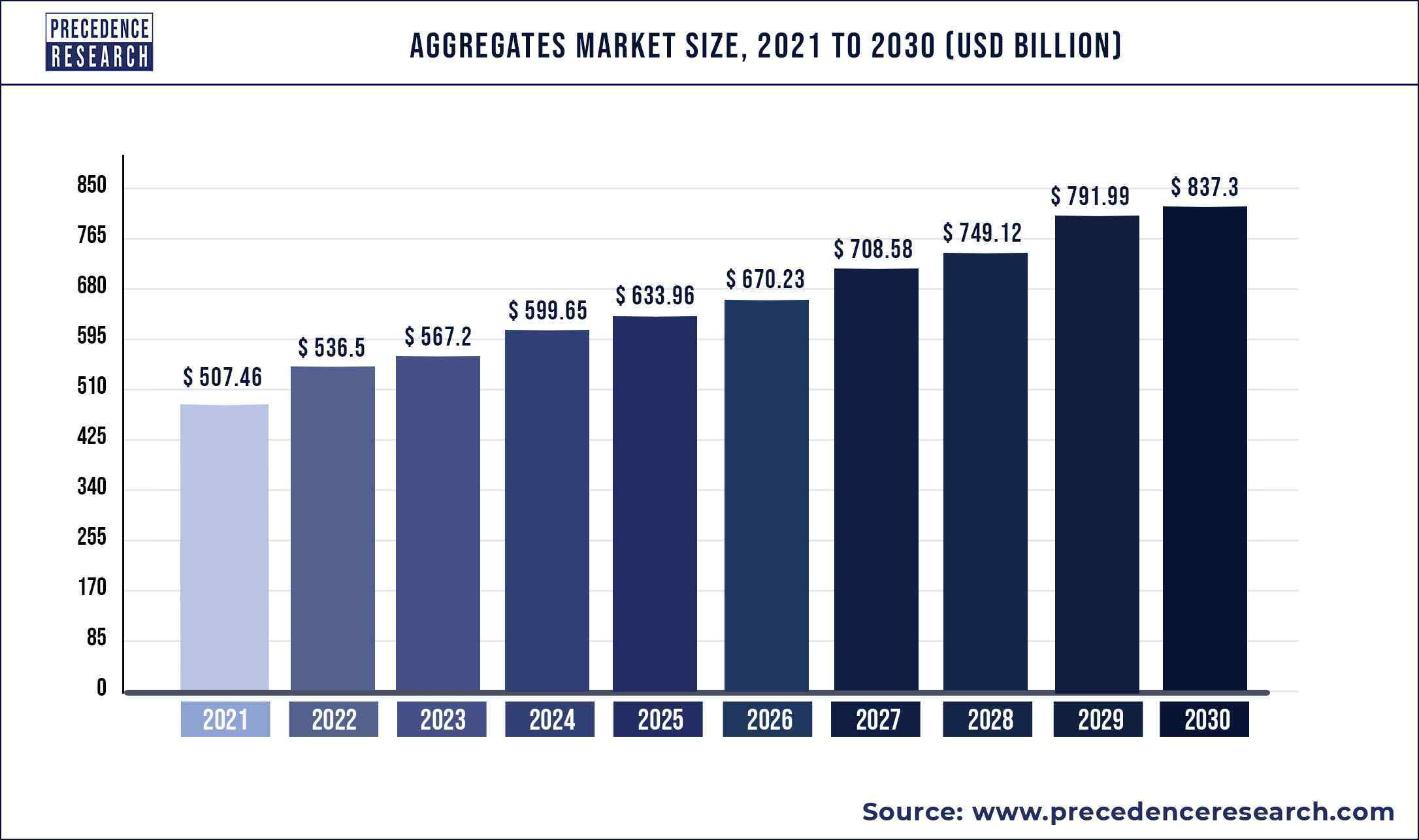 Aggregates are granular materials that are mixed with a cementing agent. They are essential components in the production of concrete, mortar, and other building materials, and they are used to build and maintain a variety of buildings, including roads, sidewalks, parking lots, runways at airports, and railways. Its components aid in compacting concrete mixtures. They are a necessary component in the building and upkeep of stiff structures since they also reduce the consumption of cement and water and increase the mechanical strength of the concrete.

It is mined naturally from quarries, deposits, and subsurface sediments. It includes crushed stone, gravel and sand. The rise in high-rise structures, which make extensive use of concrete, is largely responsible for the increase in product demand. Over the previous ten years, the high-rise structures have experienced substantial growth.

As the world becomes more urbanized, industries are springing up at a quicker rate in many places. Demand for construction, such as houses, hospitals, hotels, schools, and so on, has expanded, particularly in emerging countries. Moreover, the demand for residential to commercial buildings is rising due to rise in disposable income. One of the key elements driving up demand for such products is the government's many infrastructure projects and maintenance programs. Good infrastructure is sought after by governments because it protects the nation from an increasingly unpredictable natural environment, enables trade, supports industry, connects workers to jobs, and brings hope to suffering populations.

Urbanization and industrialization, which have fueled the demand for numerous projects like the building of bridges, expressways, and motorways, can be credited with the growth of the infrastructure sector. Sales of construction aggregates are projected to increase during the assessment period as a result of upward trends in such projects. Construction includes creating roads and public utility facilities as well as performing routine maintenance and repairs on buildings and other stationary structures. Additionally, it covers structural alterations such bearing walls, beams, and outside walls. Each form of construction project also has its own planning, finance, design, execution, and building processes, as well as improvements to work and repairs.

Report Scope of the Aggregates Market

Depending upon the type, the crushed stone garnered largest market share of around 59% in 2021. The commodity is mostly used as a construction material to make cement and build roads. The growing housing market in all emerging economies, particularly China, India, and Japan, is expected to have a substantial impact on the segment's growth. Additionally, the expansion of the demand for construction aggregates is influenced by activity in the public and private construction sectors as well as building projects connected to security measures put in place around the country. 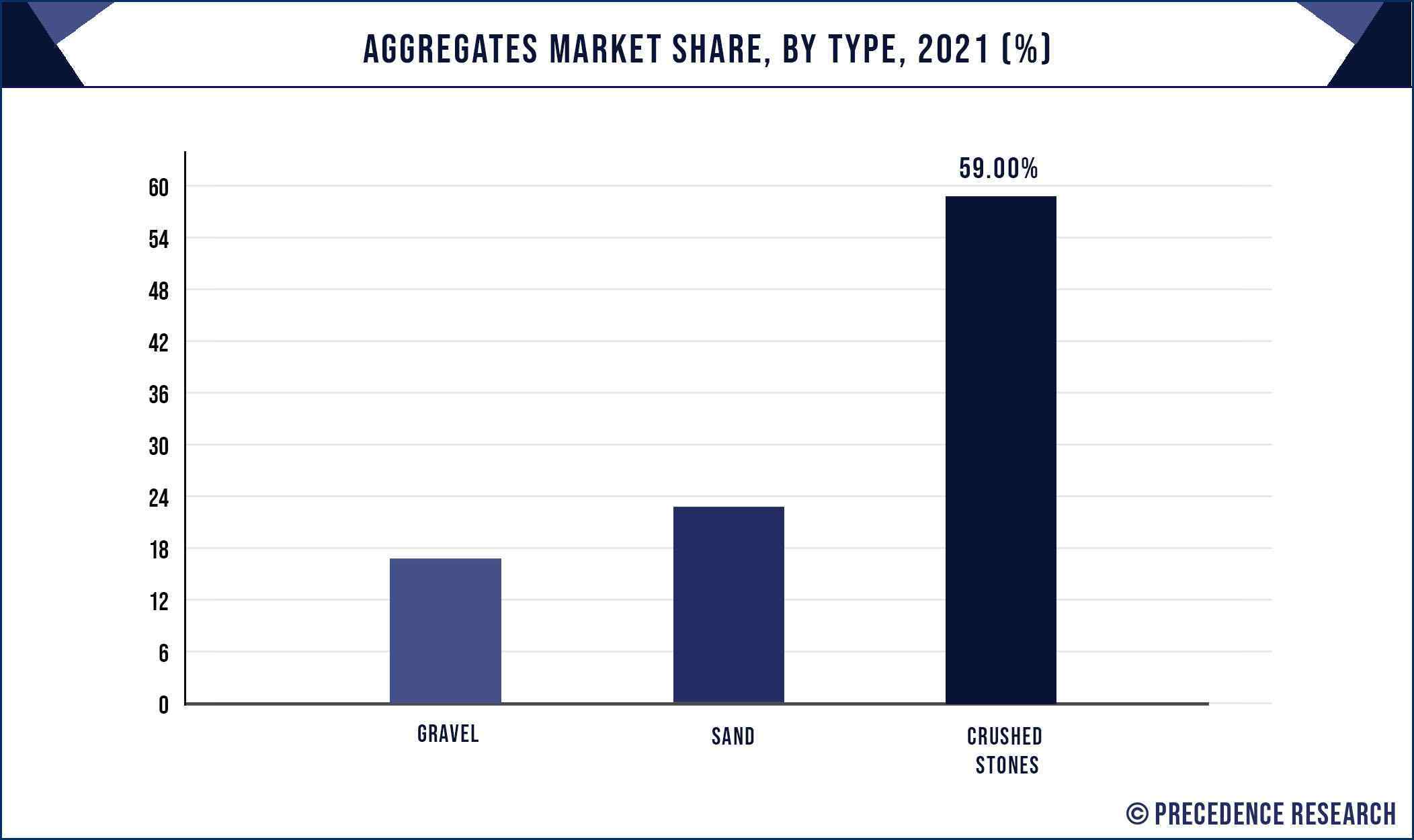 The concrete blocks, pipes, bricks, and other building supplies for roads all frequently contain gravel. The rise in high-rise structures, which make extensive use of concrete, is largely responsible for the increase in product demand. Over the past ten years, the high-rise structures have experienced substantial growth. Hence, the gravel segment is also expected to grow.

On the basis of by application, concrete segment accounted 69.5% market share in 2021 and is expected to reach at a CAGR of 5.8% over the forecast period. The road base & coverings segment hit at second position in 2021.

The infrastructure segment is expected to witness strong growth during forecast period. Due to growing infrastructure operations in the healthcare, education, energy, and electrical sectors in emerging countries, supported by rising government spending on infrastructural development.

The demand for building is rising as a result of strong economic growth in developing countries and cheap interest rates in many wealthier countries. In addition, it is estimated that the market would grow throughout the course of the forecast due to factors including increased private construction investments, technological improvements, and rising disposable income. Additionally, increased government spending on housing and infrastructure is promoting market expansion.

Asia Pacific accounted market share of around 68% in 2021. Asia-Pacific is proving to be a booming market for the growth of the aggregates market, due to increased industrialization and rising investments. There are numerous ongoing and upcoming building projects in the region as a result of the expansion of construction activity in nations like China, India, and Japan. Additionally, there are more producers of aggregates in this region than in any other, which is another factor driving market growth. Moreover, the surge in disposable income in this area has increased demand for residential and commercial buildings. Additionally, when the population grows, there is a greater need for hotels and schools, which drives up the price of aggregates. 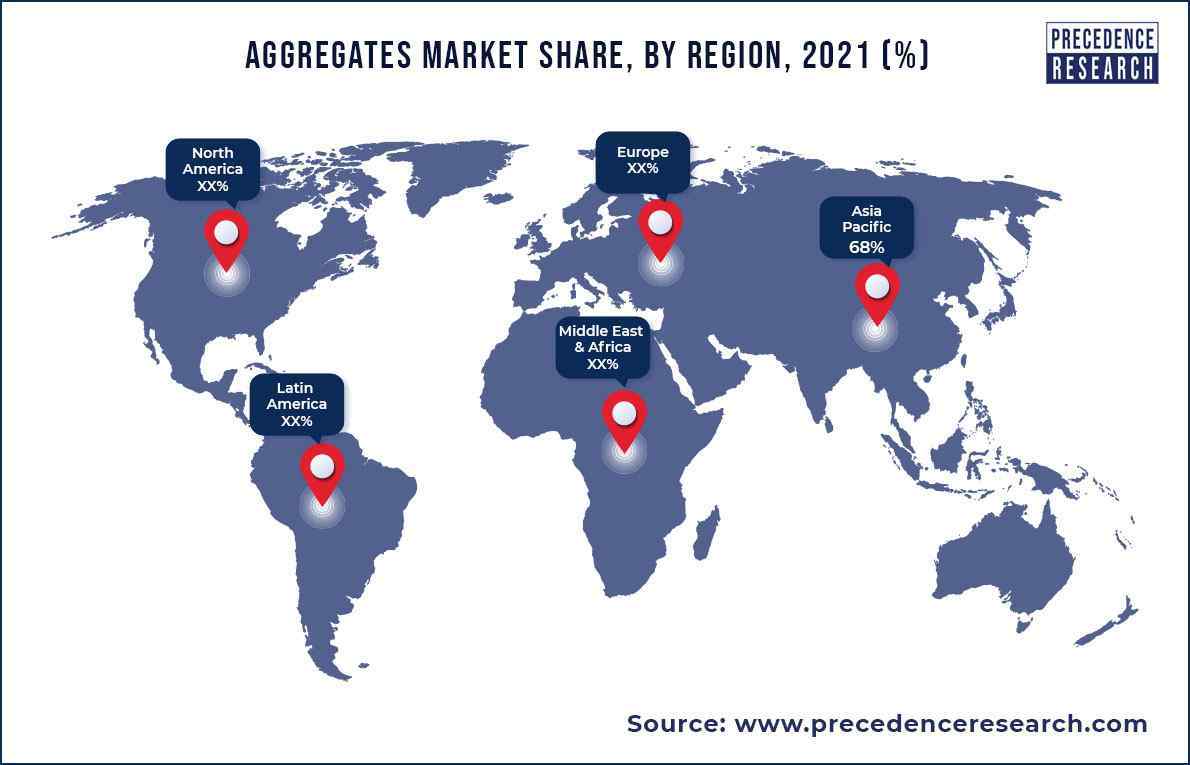 Europe and North America are also proving to be key markets for this industry. The infrastructure maintenance and new industrial construction is expected to rise. Central & South America is expected to reach at a steady growth owing to heavy investments in the roadway infrastructure development. By product, the china aggregates market was valued at USD 201.5 billion in 2021.