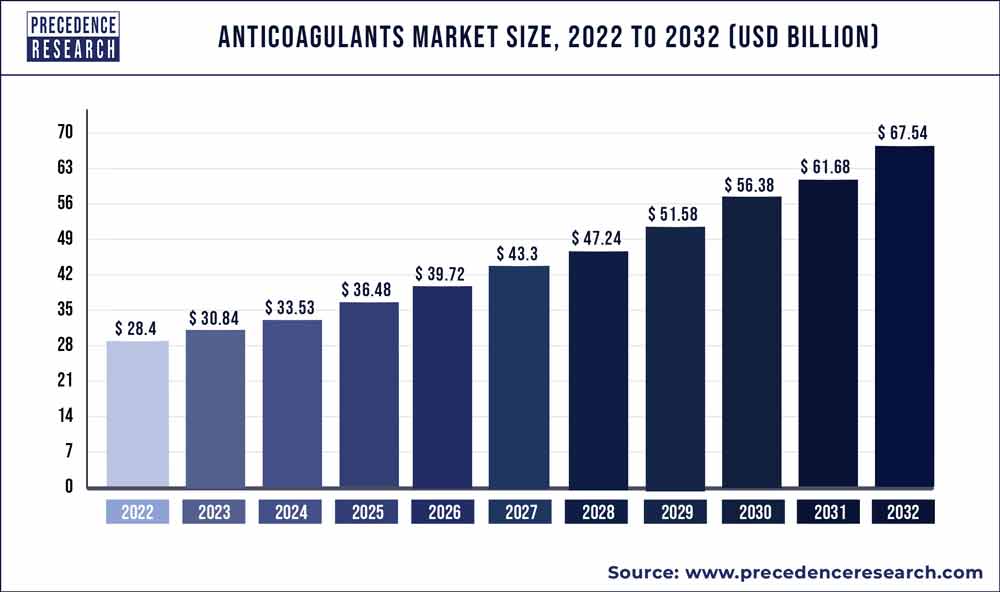 The medicines that help in preventing the blood clots it is administered for people which are at a high risk of getting there close to reduce the chances of developing some other conditions that could be harmful and false heart attacks or strokes. In order to stop bleeding from the wounds the blood clot is a seal which is created by the blood. Blood clots could potentially block a blood vessel and disrupt the blood flow around the body. Anticoagulants are commonly known as blood thinners which are basically chemical substances that prevent coagulation of blood.

Due to an increase in the number of critical and serious diseases across the globe is helping in the growth of the market. There's a high prevalence of cardiovascular diseases across the globe which is driven by modern lifestyle changes. These cardiovascular disease of the heart and the blood vessels have life threatening conditions like hypertension, coronary heart disease and hyperlipidemia. It could result in to heart attacks or strokes. Mostly the cardiovascular disorders can be treated with cardiovascular drugs which has a component of anticoagulants. Without the presence of these anticoagulants in the medicines administered to the consumers the formation of blood clots increases. Which may lead to heart attacks and other serious conditions. Cynthia development of anticoagulant products will boost the market growth. There's an increased awareness regarding the cardiovascular health and the negative impact in case the health is neglected. Blood thinning medications play a very important role in the Health Protection by preventing the creation of blood clots. Due to the launch of new type of therapeutics known as the novel oral anticoagulants are contributing to the growth of the market apixaban and rivaroxaban are the novel oral anticoagulants.

Major market players have introduced anticoagulants in order to address the critical treatment needs with respect to the blood clots. There has been major aren't innovations in the anticoagulants market ever since its inception. Currently across the globe there are two major anticoagulants namely Xarelto and Eliquis. This product was introduced by Bristol Myers Squibb company and Pfizer Inc. This product has high sales volume as it was efficient in reducing the superior risks compared to all the other drugs that are offered across the globe.

Growing propensity of cardiac disorders and the growing demand for blood thinners is one of the major factors driving the growth of the global anticoagulants market during the forecast period. Before its introduction in the market, anticoagulants have gone through several research and developments innovations. The rate of success of novel treatments like NOACs in the market from the time of launch is very high. There are two most sold coagulants present in the market, namely Xarelto, and Eliquis. A great existence of generics and other projected launches of coagulants are expected to hamper the growth of this market.

Report Scope of the Anticoagulants Market

On the basis of the indicated disease, the pulmonary embolism segment accounted market share 75% in 2021. This is an extremely life threatening condition which may lead to other serious condition which is known as the deep vein thrombosis. Other contributing factors to pulmonary embolism which are obesity cancer and heart disease shall help in the growth of the market. The different campuses segment has grown due to the prevalence of pulmonary embolism and increased conditions of blood disorders obesity and cardiovascular conditions. The heart attack segment is also expected to see a growth during the forecast period due to specially in individuals who have already suffered one heart attack.

With respect to drug class, the market is classified into NOACs, heparin & LMWH, vitamin K antagonist, and others. Among these sub-segments, NOACs is expected to account for the largest revenue share as well as is anticipated to exhibit the fastest growth among all the sub-segments over the forecast timeframe. This growth is attributed towards the increasing adoption of NOACs emerging nations and growing usage of NOACs instead of the warfarin. There are various NOAC drugs present in the market namely betrixaban, edoxaban, rivaroxaban, dabigatran, and apixaban. These drugs come with lot of benefits like quick in action, minimum contact with food and drugs, among others, which in turn are influencing the growth of this market.

By distribution channel, the hospital pharmacy segment holds the highest market share 50% in 2021. As the usage of anticoagulants is risky and it all often needs prescription after a thorough diagnosis the hospital pharmacy is happen to be the best locations for the sales. As per the current trends of the anticoagulants market the retail pharmacy segment is also expected to hold the second largest share. Retail pharmacies are able to provide efficient facilities in case of refilling prescriptions. Apart from the retail segment the online pharmacy segment is also expected to have the highest during the forecast period as there is an increasing usage of online pharmacy facilities by various nations. Online pharmacies are gaining popularity due to the ease and convenience it provides.

North American region has generated the largest revenue in the recent years and it is anticipated to dominate the global market in the forecast. North America anticoagulants market size was valued at US$ 11.90 billion in 2020. Due to the increasing prevalence of cardiovascular diseases and the treatment which is required coupled together is driving the market in this region. Due to the new product launches in the anticoagulants industry the market is expected to grow. As an increase cases of obesity and diabetes in general public across North American region there shall be an increase in the demand for anticoagulants. 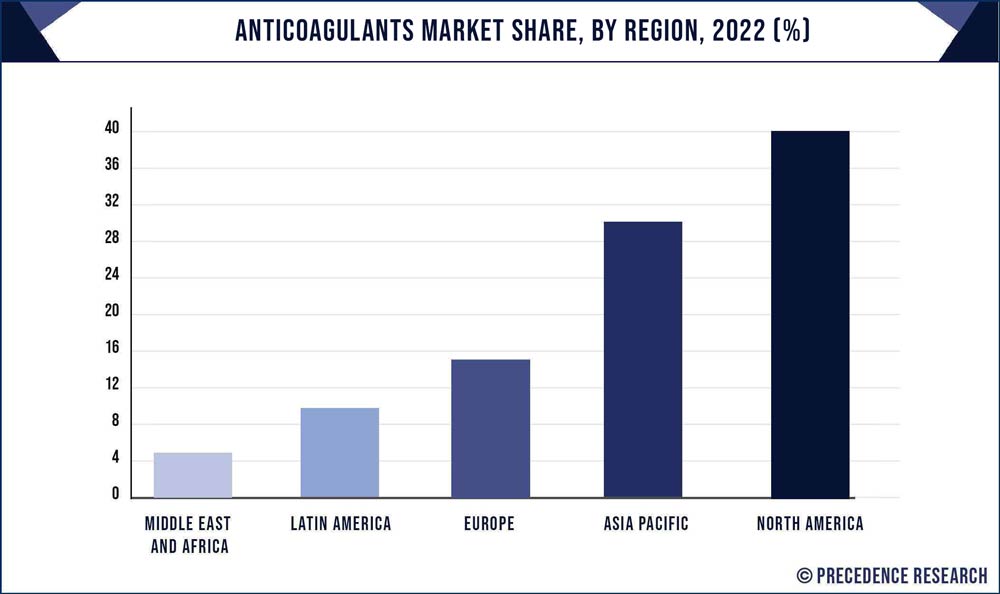 Anticoagulants Markets in the Europe are expected to grow significantly in the years to come, as a result of increasing prevalence of cardiovascular disease, which in turn is increasing the adoption rates of the medications like blood thinning. For instance, according to the European Cardiovascular Disease Statistics, cardiovascular disease registers for more than 45% of all the deaths in Europe. Germany, UK, and France are predicted to contribute to the robust growth of the markets in the Europe.

Markets in the Latin America and the Middle East & Africa (LAMEA) are projected to attain steady growth. This growth is in account of growing propensity of cardiac disorders like heart attacks. An increasing consumption of developed anticoagulant drugs is another factor boosting the growth of this market in the LAMEA region.

The global anticoagulants market is in mature state, and has a large existence of generics specifically for old product launches. The entry of new players is a bit difficult as they have to follow all the formulations of drugs made by various associations, and cannot break them at all. A few market players have a significant market share and have their presence all around the world.

By Indication of disease