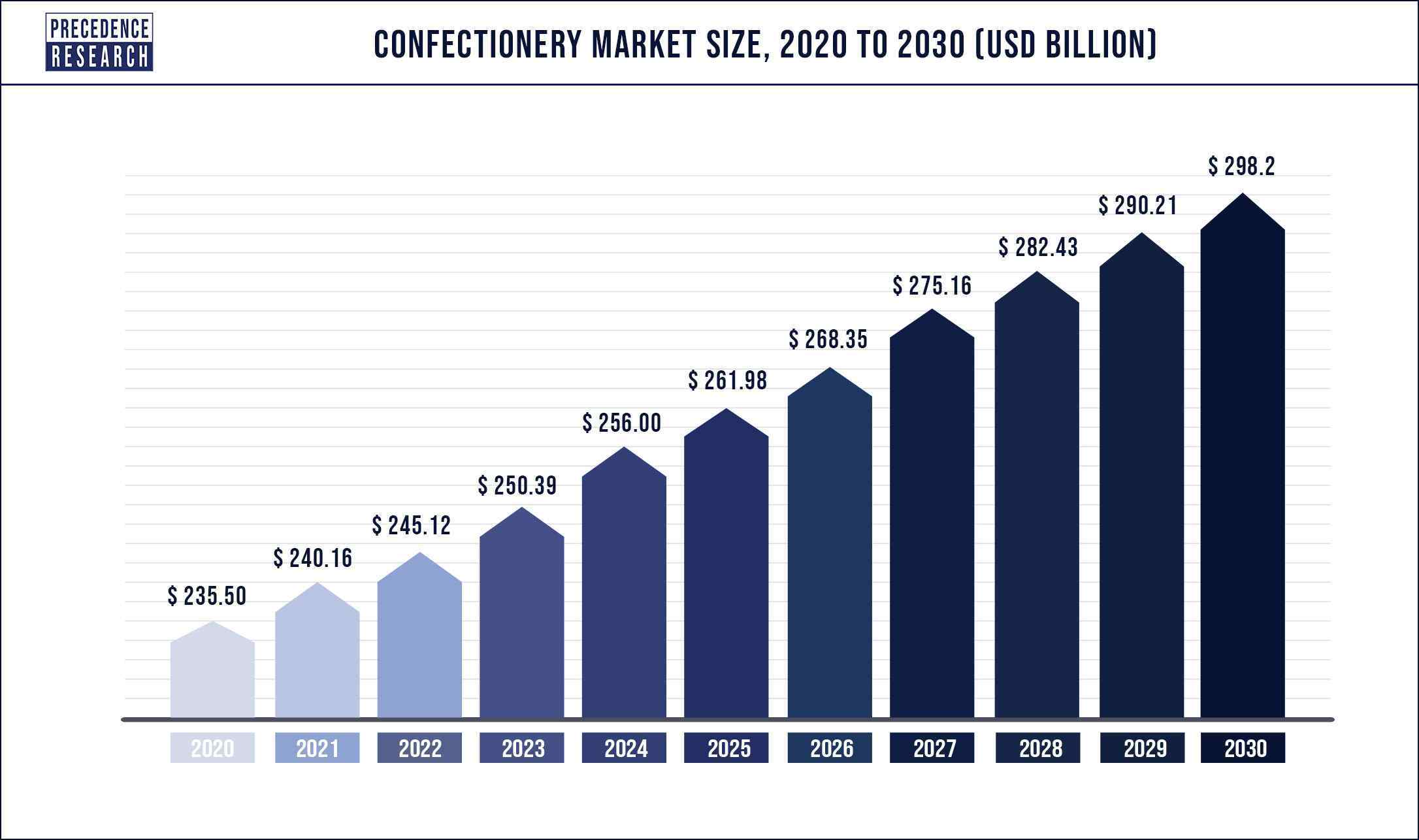 The various confectionery products such as chocolates, gums, chews, jellies, toffies, caramel, nougat, and sweets are enormously popular among the global population ranging from kids to old age people. The constantly evolving consumer taste and preferences have encouraged the manufacturers to indulge in the production of new and innovative confectioneries. Introduction of functional ingredients, innovative fillings, and exotic flavors in the various confectioneries like chocolates and sweets have significantly driven the global confectionery market in the past. Various marketing and promotional strategies of the key market players have a key role in the increased consumption and sales of the various confectioneries. For instance, Dairy Milk repositioned itself as a gifting product. As a result, Dairy Milk became a trending gifting product in India. Further, the consumption of confectioneries is not only limited to the kids. The aggressive marketing strategies by the players targeted the adult and geriatric population in order to expand their business.

Report Scope of the Confectionery Market

By type, the chocolate segment led the global confectionery market with remarkable revenue share in 2020 and is anticipated to retain its dominance throughout the forecast period. Chocolate is the most common and popular confectionery across the globe. The growing rising disposable income, craving for chocolate among the all age groups, and easy availability of various chocolates like dark chocolate, white chocolate, nut-based, and fruit-based chocolates are the important factors driving the demand for the chocolates globally.

By distribution channel, the supermarkets & hypermarkets segmentled the global confectionery market with remarkable revenue share in 2020 and is anticipated to retain its dominance throughout the forecast period. The supermarkets & hypermarkets offers discounted prices on popular brands and has high penetration in the developed markets like U.S., Germany, UK, France, Canada, Italy. This segment accounted for over 35% of the market share in 2020 and is estimated to remain the leading segment throughout the forecast period.

On the other hand, online stores is expected to be the most opportunistic segment during the forecast period. This is attributed to the rapid growth and popularity of online groceries and food delivery platforms across the globe.

By age group, the adult segmentled the global confectionery market with remarkable revenue share in 2020 and is anticipated to retain its dominance throughout the forecast period. This is mainly attributed to the increased consumption of different confectioneries among the millennials. The improved packaging, introduction of innovative flavors, and personalized services offered by the confectioners are the major driving force of this segment. 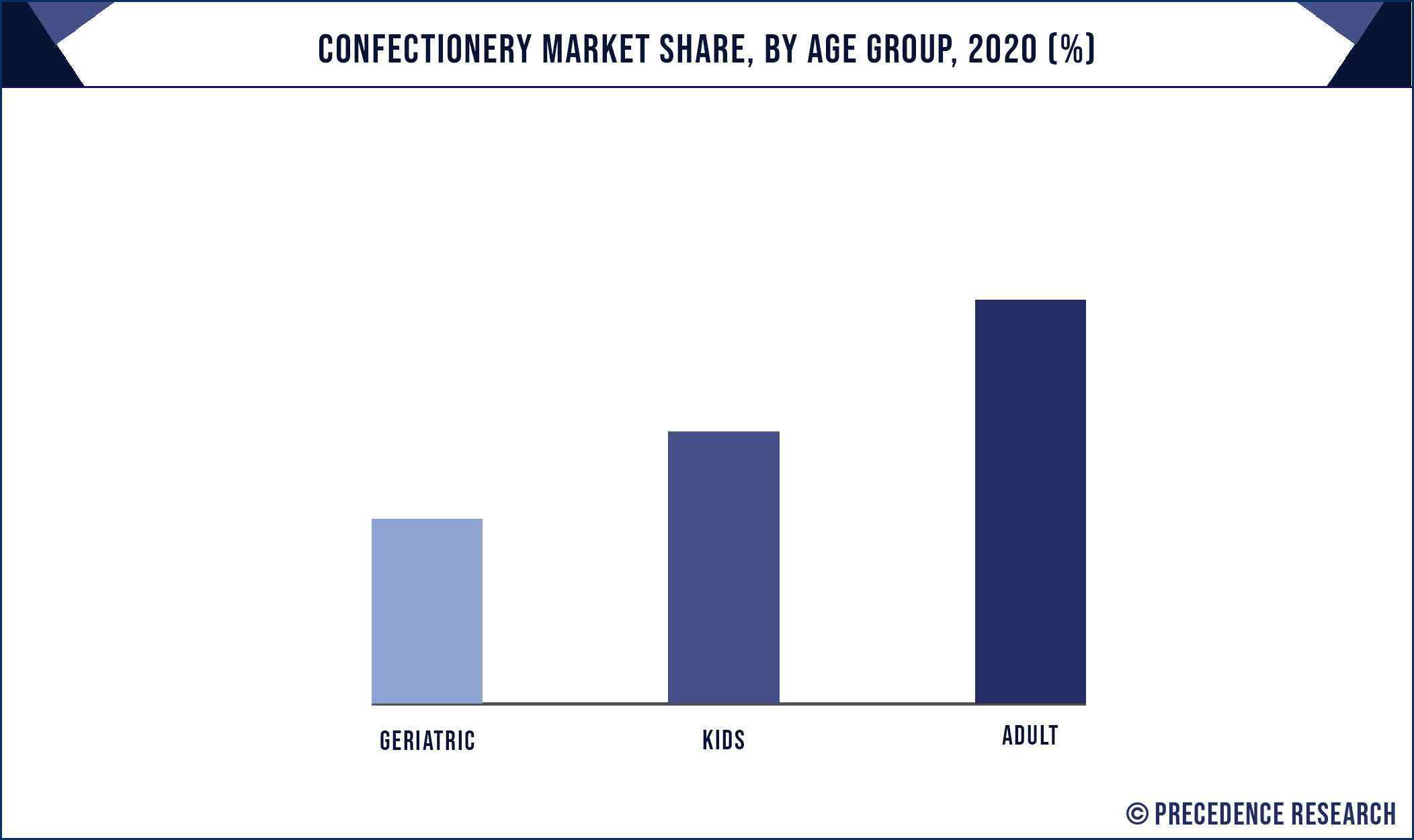 On the other hand, the geriatric segment is expected to grow rapidly during the forecast period. The population of the world is getting older. Therefore, the consumption habits of people is expected to boost the consumption of sugar-free confectioneries, thereby propelling the segment growth in the forthcoming years.

Based on the region, Europe dominated the global confectionery market with the highest revenue share in 2020 and is expected to sustain its significance throughout the forecast period. This is attributed to the highest per capita consumption of confectioneries in majority of the European countries such as Switzerland, Sweden, France, Italy, and Netherlands. Further, the growing consumer awareness regarding the side-effects of chemically produced raw materials like cocoa liquor used for making chocolates have exponentially boosted the demand for the organic chocolates in the region. The growing demand for the organic chocolate among the population is expected to be the major driver of the confectionery market in Europe during the forecast period. 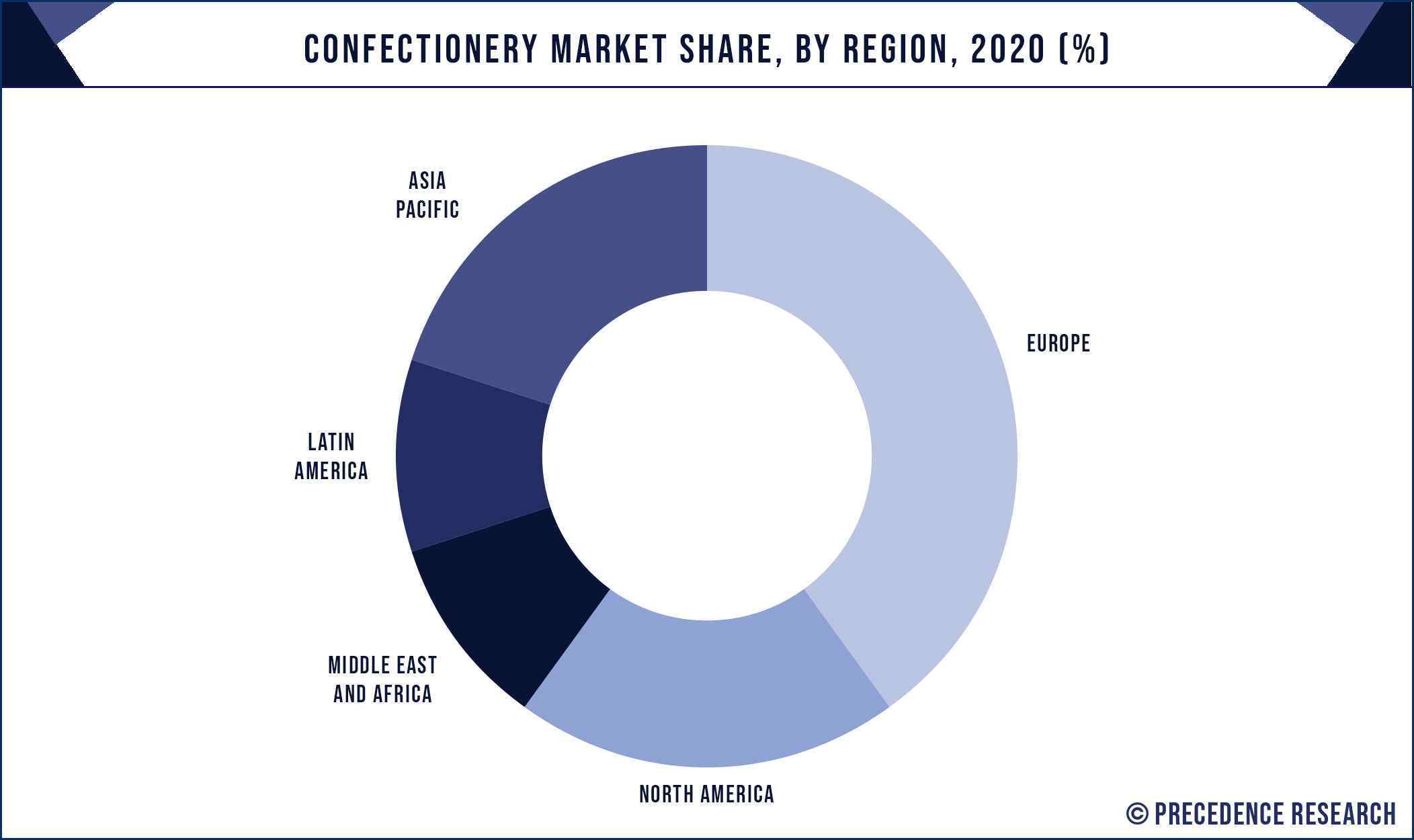 On the other hand, Asia Pacific is estimated to be the fastest-growing confectionery market during the forecast period. The presence of huge youth population, rising disposable income, changing consumer lifestyle, demand for the premium products among the young population, and rising investments in the region by the major market players are the various important factors that are expected to foster the market growth across the region.

In January 2020, The Hershey Company launched its new chocolate bars in India to mark its presence in the most attractive market in the Asia Pacific region.

These major developments by the key players serves the constantly changing tastes and preference of the modern day consumers and exponentially contributes towards the market growth across the globe.

Some of the prominent players in the confectionery market include: