The global copper sputtering target market is surging, with an overall revenue growth expectation of hundreds of millions of dollars during the forecast period from 2022 to 2030. 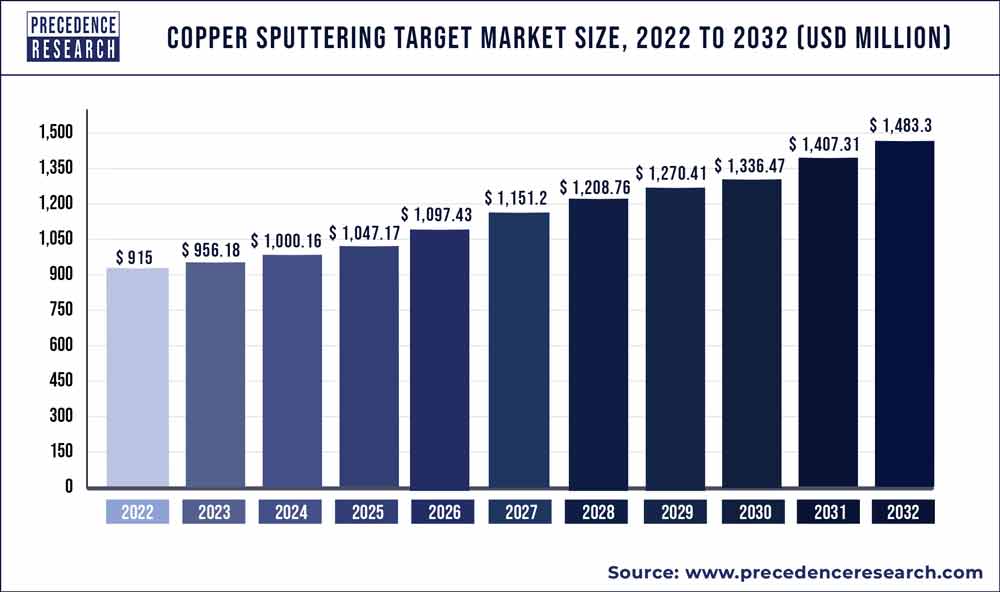 Sputtering targets are materials that are subjected to physical vapour deposition (PVD), a process that involves the high-velocity ejection of atoms from solids. The atoms that are ejected after depositing on the workpiece produce a thin film coating with beneficial properties. There is a transfer of momentum that occurs when high-energy ions collide with the atoms of the target substance. Multiple collisions can occur at times. Due to long-distance flight, the ions occasionally lose energy. If the energy of the ions travelling to the target is higher than the energy of the bonds holding the atoms of the target material together, the colliding atoms will detach from the target material, a process known as sputtering. And the production of thin coatings on the target that range in thickness from a few nanometers to a few micrometres occurs during copper sputtering, a sort of deposition technique.

Gaseous atoms are released when the target materials split apart. These thermodynamically unstable atoms often live on a surface in a vacuum. The thin film is a coating of atoms that is formed on the target and is a micrometre thick. Using copper sputtering targets, the semiconductor and solar industries manufacture solar cells and other electrical devices. Using the sputtering method, a thin layer of an ultra-pure metallic or oxide substance can be deposited on another solid material. A component capable of high-speed computer operation is now being developed using copper sputtering targets with low electric resistance. The copper sputtering target’s normal grain size is around 30 m, and 17% of the heterogeneities are formed by annealing at a temperature of 0.4 Tm in order to achieve uniformity in the thin layer that is created. Gases including krypton, xenon, neon, and argon are used in the copper sputtering procedure. Copper sputtering targets can be set up from projects in research and development to production teams, covering medium to large substrate regions, for effective energy directed to the target mass.

Driver: Increased use of copper as a sputtering target for semiconductor chips will fuel industry expansion.

Restraint: The market's growth is hampered by the challenge of uniformly setting targets for complicated structures.

Two of the major obstacles for the worldwide copper sputtering business are the inability to reliably place targets with complex geometries and the sluggish deposition rate for specific materials in the sputtering target technology. The technological advancements and innovations produced by both established and upcoming producers in the copper-sputtering target market are also expected to hasten the resolution of these issues.

The development of semiconductors for consumer devices like smartphones, tablets, and laptops is likely to assist the growth of the global copper-sputtering target market during the forecasted period. For instance, IBM introduced strides in the design and manufacturing of semiconductors in May 2021 when it unveiled the first chip in the world to use 2 nm Nano sheet technology. Almost every area of modern life uses semiconductors, including computing, appliances, communications, transportation, and essential infrastructure. Improved chip performance and energy efficiency are in high demand, especially in the era of hybrid clouds, AI, and the Internet of Things. IBM has created cutting-edge 2-nanometer chip technology to help the semiconductor industry keep up with this growing demand. It is projected to perform 45% better or consume 75% less energy than the most recent 7 nm node products. As a result, these improvements in the business offer a lucrative opportunity for market expansion.

The COVID-19 outbreak has significantly harmed the world's social and economic institutions. The target market for copper sputtering is among the many value and supply chains that have been affected by the disease. Authorities enforced lockdowns at several locations. To determine how the COVID-19 outbreak has impacted the global market, we will consider both supply and demand.

An outline of the COVID-19 pandemic's immediate and long-term repercussions would be provided. During and after the outbreak, this would assist in the development of business strategies for all market players, including vendors, producers, distributors, suppliers, and end users.

Numerous industries, including oil & gas, manufacturing, retail, and others suffered greatly as a result of the government's strict global lockdown implemented in response to the COVID-19 epidemic. Additionally, the disruption in the supply networks for goods and services limits market expansion. Similarly to this, the COVID-19 pandemic negatively impacted the copper-sputtering target market due to several factors, such as a shortage of raw materials and a drop in semiconductor industry revenue. Both the supply and demand sides of COVID-19 have had a significant impact on the semiconductor industry. Semiconductor foundries were forced to shut down due to a brief mismatch in demand from the consumer electronics industry. The supply chain interruption had an immediate effect on lead times, backlog obligations, forecasts, costs, and personnel management. The COVID-19 pandemic, therefore, had only a little negative effect on the growth of the copper-sputtering target market.

This market is divided into Solar cells, LCD displays, semiconductors, Solar Cells, LCD Displays and others.

Given the rising demand for semiconductors, solar cells, and LCDs, North America is expected to have significant growth in the global copper-sputtering target market. 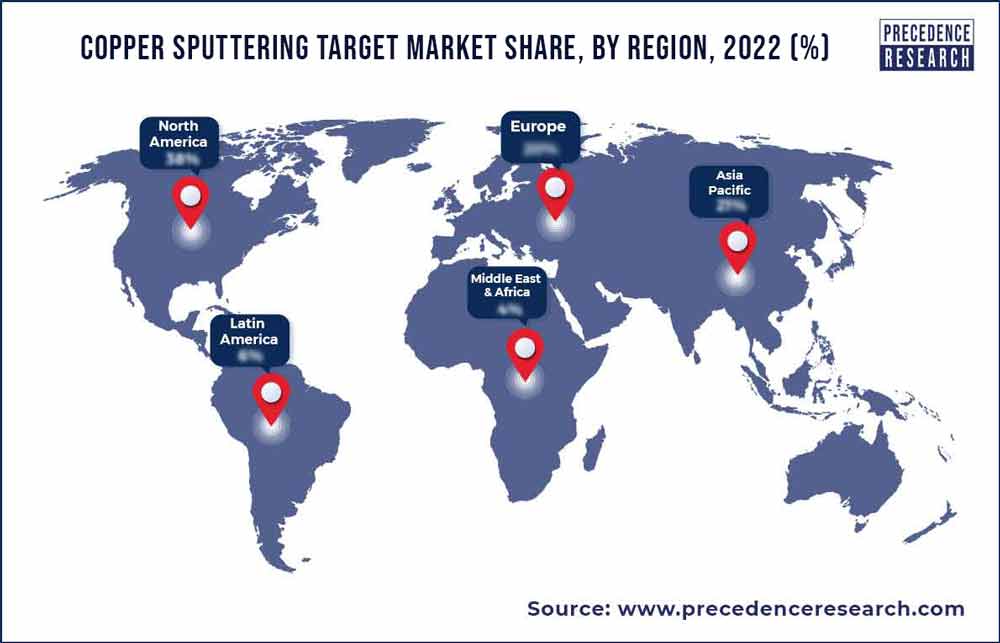 The market is expanding in Europe as a result of rising demand for high-purity items such as copper sputtering targets with ultra-high purity. Due to the rising demand for copper sputtering targets across a range of industries, including semiconductors, LCDs, solar cells, and others, the Asia Pacific is anticipated to experience considerable expansion over the course of the projected period.