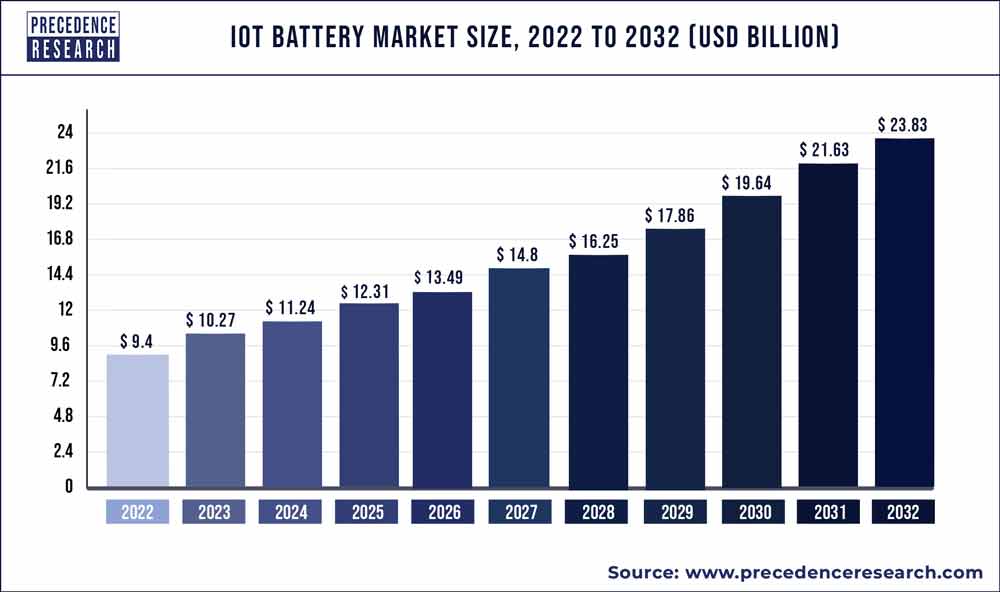 The popularity of Internet of things technology has soared in recent years, fueling all of their new smart gear. IoT gadgets can be anything from smart speakers to smartphones to fitness trackers to smart home security systems. They are electronic gadgets linked to one another through the internet and the cloud.  All consumer batteries convert the chemical energy they contain inside into electrical energy, which is subsequently utilized to power various gadgets. There are many different chemical combinations used, but lithium-ion and alkaline batteries are the most popular. While the battery's internal chemistry has an impact on how well it performs, the battery's discharge rate and energy density represent the true indicators of quality and worth.

The development of Internet of Things (IoT) technologies may be slowed by power and battery issues. To store enough power to run a device and not lose power over time, these IoT-based devices therefore need high capacity batteries and lengthy shelf lives. As a result, choosing the right battery for IoT devices is essential given that they are used in a variety of sectors, including consumer electronics, home automation, wearable technology, BFSI, industrial, retail, agriculture, aerospace & defense, and healthcare.

The expansion of internet connectivity in developed nations and the increased need for affordably priced smart wireless sensor networks are projected to be the market's main growth factors. The industry is anticipated to benefit significantly in the future from the expanding popularity of the Internet of Things (IoT). Additionally, it is anticipated that the market for wearable technology would expand over the course of the projection period as a result of the growing popularity of IoT and increased awareness of equipment for physical fitness in emerging nations. It appears that the Internet of Things is ready to be extensively deployed in commerce. The growth of IoT technologies has been aided by sophisticated underlying technologies and an abundance of gadgets. Power source for IoT Increased IoT utilization, a multifold increase in IoT usage, and an increase in applications in cutting-edge and portable technology all contribute to the market's growth.

The coronavirus epidemic has changed both how the semiconductor business operates and how society as a whole function. The IoT enabled devices also suffered during pandemic however, the demands from healthcare and home automation segment drives the market for battery.

Drivers in the IoT Battery Market

Challenges in the IoT Battery Market

According to type, the chemical segment is in the lead and is anticipated to contribute most to the IoT battery market. Due to their ability to deliver the greatest power per unit of mass and volume, lithium-ion batteries have emerged as the standard power source in the majority of applications. They are the most efficient in terms of coulometry. In other words, it gives the greatest power out of a Li-ion battery for every Watt put into it. IoT gadgets, particularly smartphones and smartwatches, are very popular with rechargeable lithium-ion batteries. Lithium-ion batteries typically have a high energy density and a minimal rate of self-discharge. They are the most reliable kind of rechargeable battery and may be used repeatedly without losing power. These are the most common batteries on the market, and IoT devices in particular benefit greatly from their dependability and even customizability.

That reliability component is extremely important for Internet of Things gadgets. IoT gadgets include appliances, home security systems, lightbulbs, and fitness trackers. For several of these devices, homeowners may have major concerns about damage or a complete system shutdown.

Products that don't need a lot of power and have a short lifespan use primary batteries. Due to their shorter self-discharge times than rechargeable thin-film batteries, these batteries are seeing an increase in use in a variety of applications, including smart packaging, smart cards, home automation, retail, and patches for aesthetic and medicinal purposes. The primary battery market is anticipated to expand at the greatest CAGR during the forecast period.

During the forecast period, North America is expected to maintain its dominant position. This region is a key market for batteries used in Internet of Things (IoT)-enabled devices due to the presence of some of the largest worldwide companies, including Cisco Systems, Texas Instruments, and Intel. A number of North American companies are also producing batteries for wearable technologies, smart packaging, smart cards, medical equipment, and wireless communication systems. The increasing demand for wearables and medical devices is one of the primary drivers of this region's battery market growth. As a result of advancements made in the North American packaging industry, smart sensors, RFID tags, and smart labels are now present in containers. Smart packaging uses printed small batteries. Moreover, the rise in demand for smart packaging is predicted to be the main driver of the growth of the thin-film and printed batteries segments of the North American IoT battery market.

Asia-Pacific region will grow at a significant rate during the projected period. In the Asia Pacific region, the sale of semiconductors is expanding quickly, which is the main driver of flexible batteries. China, Korea, and Japan are among the countries that contribute the most to the semiconductor sector in Asia Pacific. Major semiconductor companies including Samsung Electronics, LG, and others are also located in the region. Hence, this region is expected to be in a dominating state during the forecast period.