The global microprocessor market was valued at USD 83.90 billion in 2020 and it is estimated to reach USD 128.74 billion by 2030, growing at a compound annual growth rate (CAGR) of 4.36% from 2021 to 2030, owing to growing use of microprocessors in smartphones and increasing use of embedded microprocessors in the healthcare electronics sector. 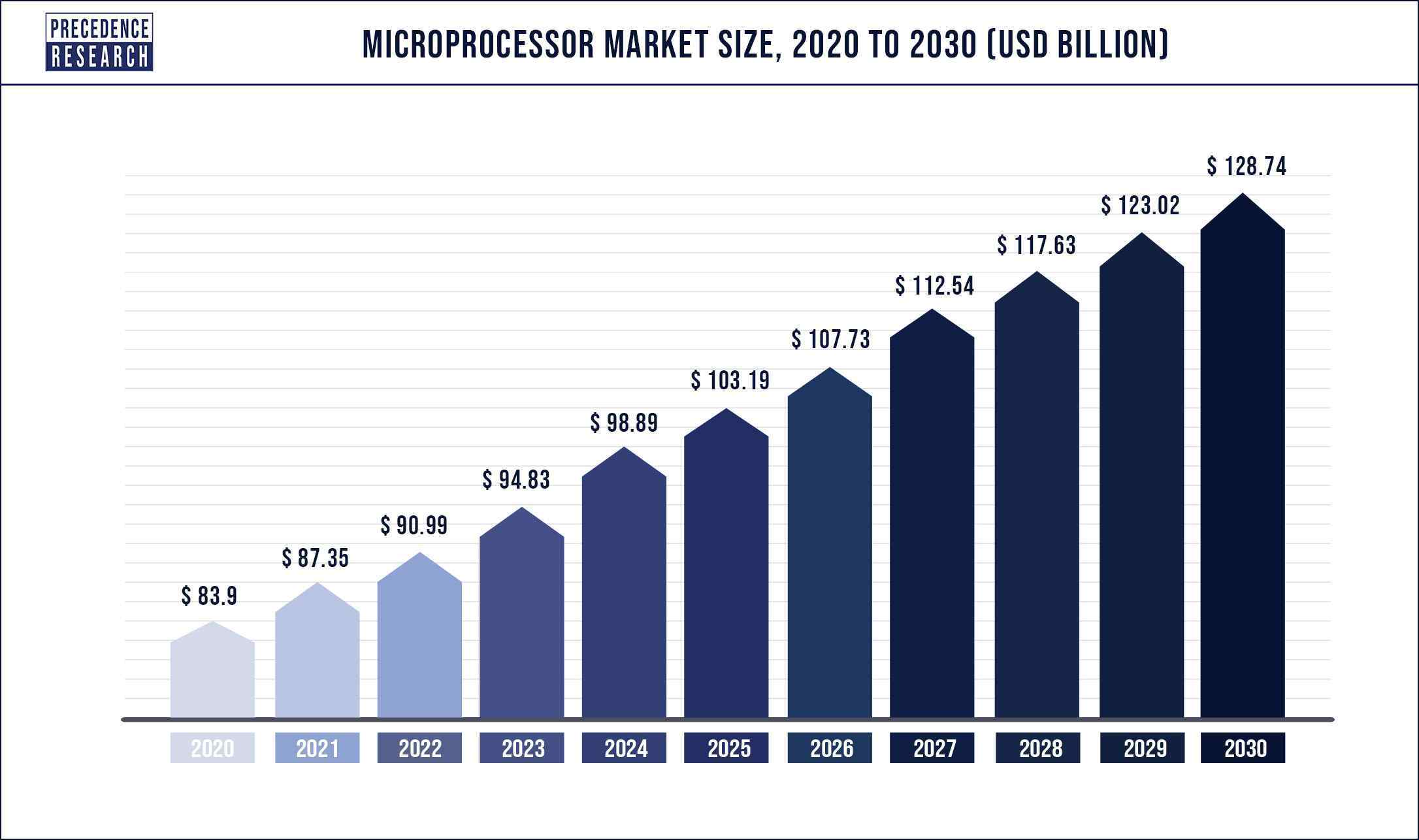 In terms of market size and models, the smartphone industry has been continually evolving and rising. According to Ericsson, the number of smartphone subscriptions worldwide will surpass six billion in 2021, and will continue to expand by several hundred million in the next years. The countries with the most smartphone users are China, India, and the United States. By 2026, it is predicted that the number of smartphone subscribers would have risen to 7516 million. With the increasing demand of smartphones, the manufacturers are developing the efficient product. Because it is utilized to improve the speed and efficiency of a smartphone, the microprocessor improves its performance. Any smartphone's performance speed is directly related to the microprocessor's performance. As a result, the rapidly expanding demand for smartphones is likely to boost the microprocessor market forward.

Healthcare spending is directly related to an ageing population, rising per capita disposable income, and a better quality of life. Medical spending per person in the 60+ age group is significantly greater than in the 15–30-year age group. The world's elderly population is growing at an unprecedented rate, resulting in longer life expectancy but with a slew of comorbidities. Embedded microprocessors are utilized in a variety of healthcare electronic systems to improve quality of life and minimize medical costs, such as real-time patient monitoring systems, wireless patient body monitoring systems, and remote health monitoring systems. Nerve integrity monitors, for example, use embedded microprocessors to convert laryngeal muscle action into audible and visual electromyographic (EMG) signals in a variety of procedures. These factors have a favorable impact on the global microprocessor market's growth.

The global microprocessor industry is predicted to be impacted by the COVID-19 pandemic. During the first quarter of 2020, the entire supply chain was interrupted due to a lack of parts. Many East Asian economies, notably China, South Korea, Taiwan, Malaysia, Singapore, the Philippines, Thailand, and Vietnam, rely heavily on the electronics manufacturing industry as a source of manufactured exports. Furthermore, the electronics supply chain is heavily intertwined across economies, with China serving as a key supplier of intermediate electronics parts to a number of Southeast Asian electronics industries. In 2019, during February and March, the complete stoppage of Chinese industrial output for an extended period caused substantial supply chain disruptions in the electronics manufacturing industry in many Southeast Asian regions. In 2020, the market shows a small downward curve but due to the recovery rate and low cases at the global level the microprocessors market will grow at the significant rate in the forecast period.

The Reduced Instruction Set Microprocessor (RISC) segment is the most dominating segment in the market and accounted for more than 30% share in the 2020 due to its reduced chip complexity. It aids in maintaining the instruction size without the need of a microcode layer or the related overhead. With developments in the scaling and lower IC prices, the market for RISC-based processors is expected to grow at a higher pace. 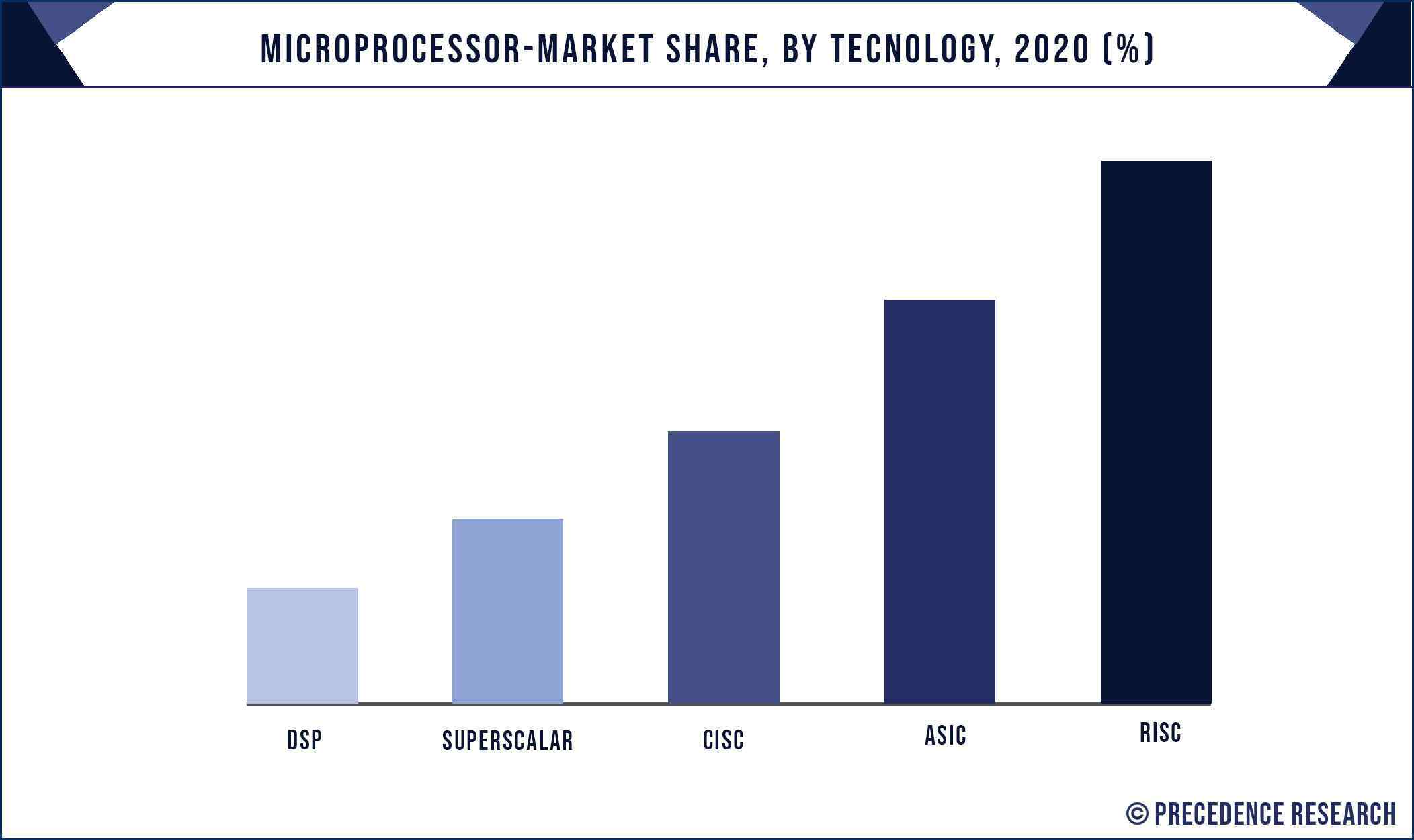 The ASIC segment is expected to be the fastest growing in the forecast period due to the increasing adoption of ICs in the consumer electronics industry due to their advantages such as low consumption electric power, small size and others. 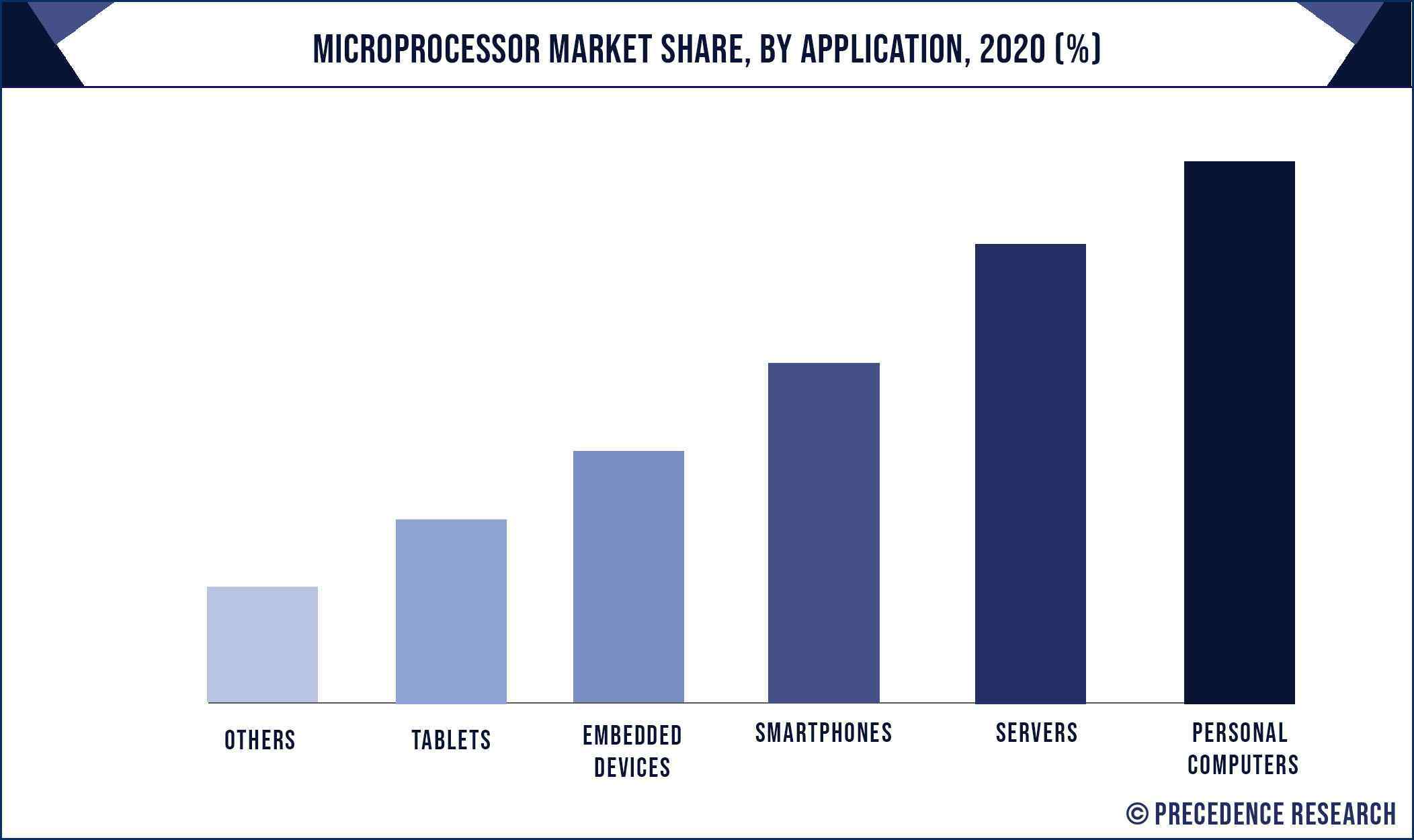 The Asia Pacific held the largest share in the market due to the rising penetration of smartphones and other electronics. In 2020, the region was the largest contributor to the revenue with the market share of 55%. The consumer electronics market size was valued at USD 400 billion in 2020 in Asia Pacific. The growing urbanization and rising disposable income in the region are the major factors which are increasing the usage of consumer electronics in high and middle-income households. This will create a positive impact on the microprocessor market as microprocessors are used widely in the consumer electronics sector to increase efficiency of the overall product. 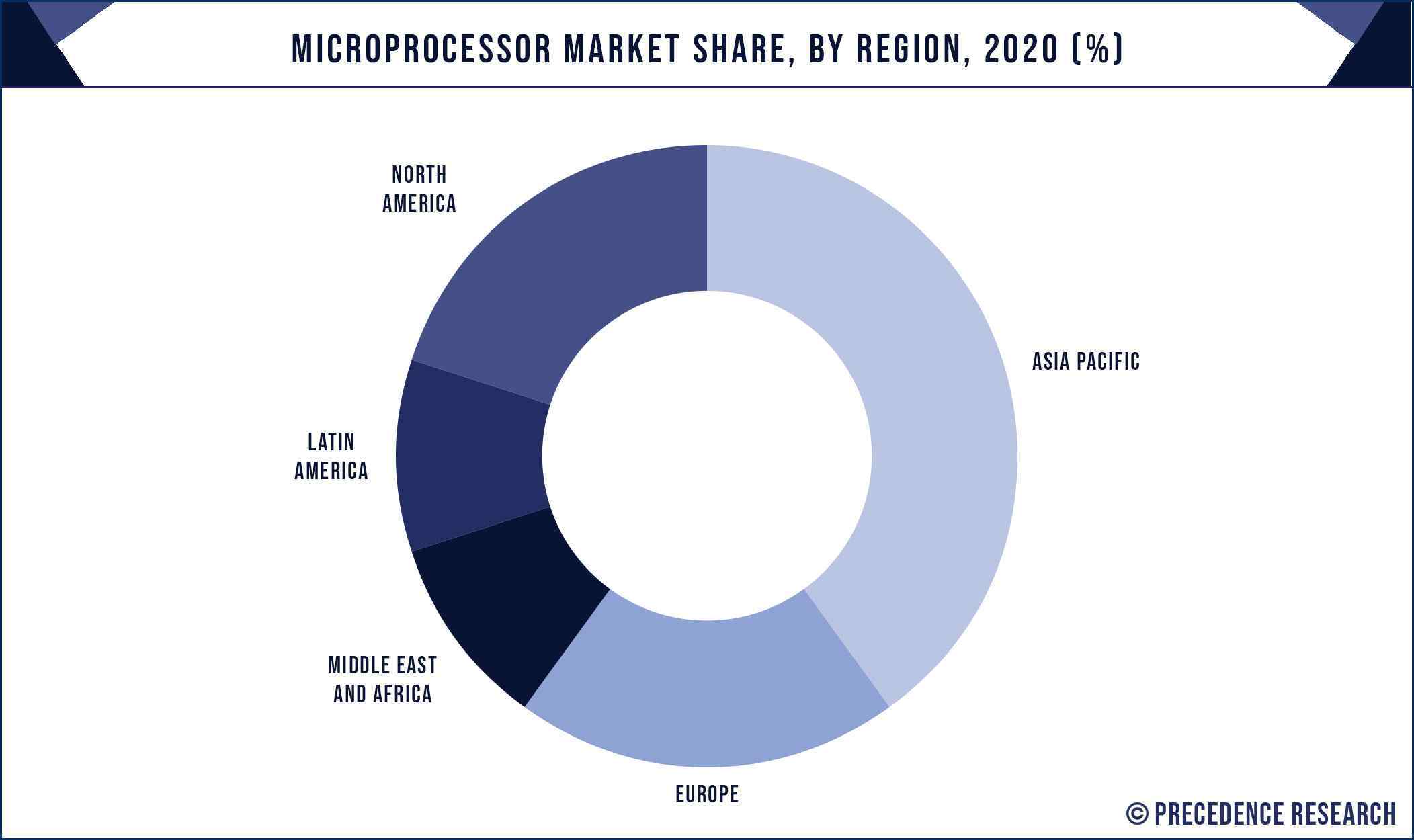 North America has the considerable share in the global microprocessors market due to the presence of market leaders in U.S. and Canada. The one of the major players which is having the large share are Intel Corporation., Qualcomm Technologies Inc., and Texas Instruments Inc. The rapid development of consumer electronics items, healthcare monitoring systems, and electric and hybrid automobiles in North America is a key element driving market expansion in the United States.

Because of the presence of major competitors and regional players, the microprocessor market is fragmented and extremely competitive. All of the leading players outperform one another in one or two categories, increasing rivalry in the Microprocessor industry. Thus, the market is very competitive. Because fixed costs are high and marginal costs are low, manufacturers are under high pressure to reduce costs below the market average in order to attract customers while also covering some of their fixed expenses. This leads to a ‘Bertrand Trap,' in which the top companies compete on the same dimension, resulting in a ‘zero-sum game,' with one company gaining and the other losing.

Some of the prominent players in the microprocessor market include: