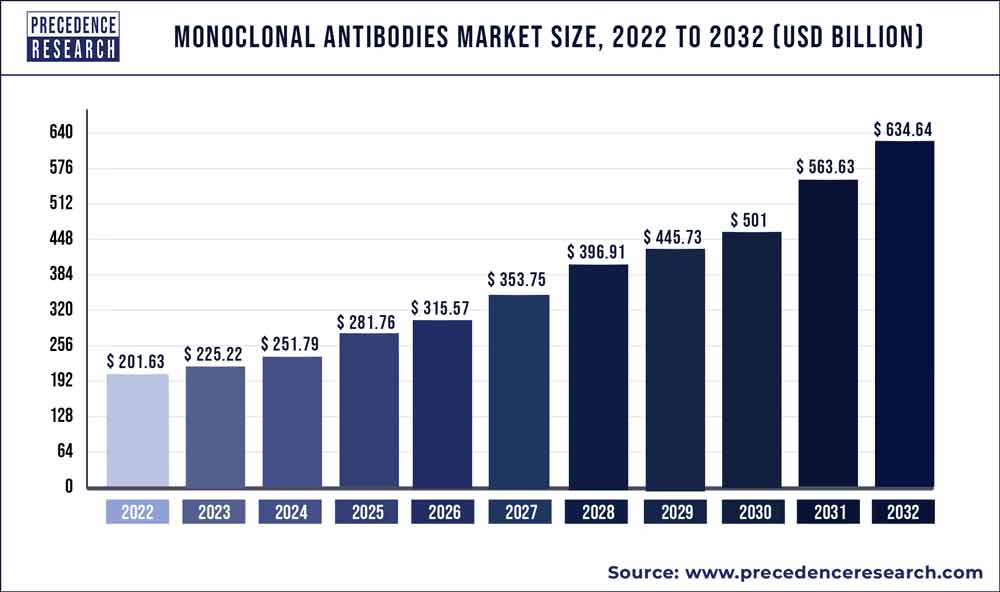 The globe is witnessing a rapid spike in the new cases of cancer and various other chronic diseases among the population. As per the GLOBOCAN, a report by the International Agency for Research on Cancer (IARC), approximately 19.3 million new cancer cases and approximately 10 million cancer deaths across the globe were reported in 2020. This number (new cancer cases) is expected to rise by 47% from 2020 to 2040, globally. Therefore, it is estimated that around 28.4 million new cancer cases will be reported in 2040 across the globe. Thus, the surging prevalence of cancer and other chronic diseases is boosting the demand for biologics, which is expected to foster the growth of the global monoclonal antibodies market during the forecast period.

Furthermore, rising investment by the top pharmaceutical companies in the genomics research and development coupled with the emergence of technologically advanced genomic platforms like next-generation sequencing (NGS) is expected to significantly boost the market growth in the upcoming years. Moreover, the cost-effectiveness of the NGS platforms is boosting its adoption in the research and development of monoclonal antibodies. The mAbs are the widely accepted biologics that is expected to provide lucrative growth opportunities to the market players in the foreseeable future. The rising awareness among the patients and the healthcare service providers regarding the benefits and effectiveness of the monoclonal antibodies is expected to drive its demand.

Moreover, the approvals of several blockbuster monoclonal antibodies such as Remicade, Avastin, Rituxan, and Herceptin for the treatment of diseases like cancer, ulcerative colitis, rheumatoid arthritis, and Crohn’s disease has significantly boosted the growth of the mAbs market across the globe.

On the other hand, the humanized mAb segment is expected to witness a significant growth rate during the forecast period. This growth is attributable to the rising adoption of the humanized mAb in the treatment of diseases like autoimmune diseases, cancer, and inflammatory diseases across the globe. Further, the deployment of advanced genetic engineering technology in the production of humanized mAbs is further fueling the growth of this segment. 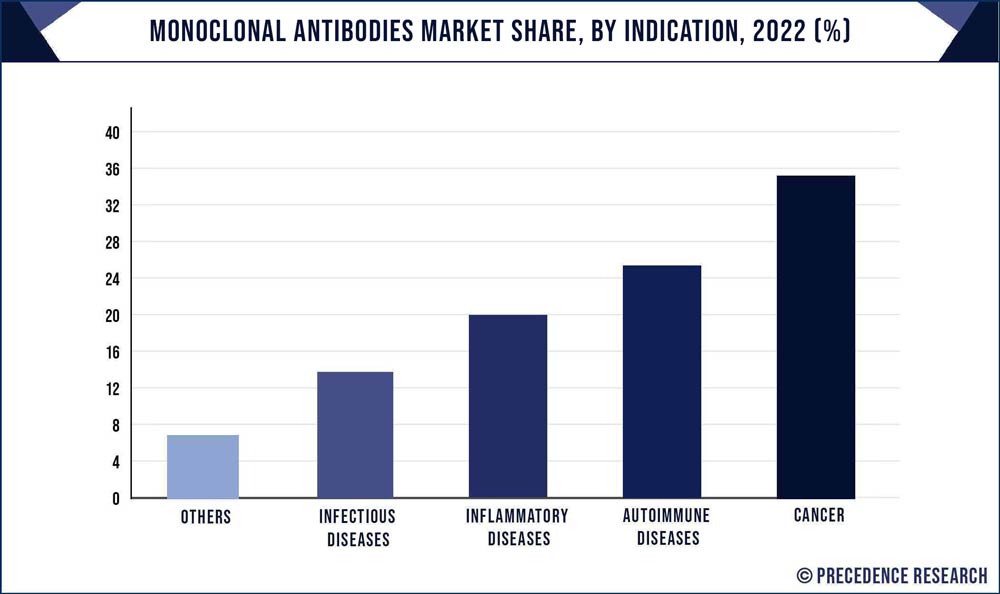 Based on the distribution channel, the hospital pharmacies segment dominated the global monoclonal antibodies segment in 2021. This is attributed to the increased number of hospital admissions owing to the surging prevalence of various chronic diseases like cancer, autoimmune diseases, and rheumatoid arthritis among the population. The rising access to the advanced healthcare facilities has led to the increased sales revenue of the hospital pharmacies in the market. The availability of huge range of products and wider availability of drugs in the hospital pharmacies makes it a convenient place for buying various drugs like mAbs. The oncology segment is expected to witness growth at a CAGR of 8.95% over the forecast period.

The online pharmacy is expected to be the fastest-growing segment during the forecast period. The rising penetration of internet, availability of wider range of drugs, quick home delivery, convenient payment options, and huge discounts offered by the online pharmacies is significantly boosting the growth of this segment across the globe.

North America accounted largest revenue share 45% in 2021. The increased prevalence of chronic diseases in North America, presence of advanced healthcare infrastructure, rapidly ageing population, high healthcare expenditure, and increased awareness regarding the mAbs among the population has led to the higher demand for the monoclonal antibodies in North America. According to the American Cancer Society, more than 1.8 million new cancer cases and around 606,520 deaths were reported in the US in 2020. It is estimated that the US population will have around 24% geriatric people aged 65 years or above by 2060.

Asia Pacific is estimated to be the most opportunistic market during the forecast period. The rising consumption of processed food, growing prevalence of smoking, and rising consumption of tobacco are the major factors that are expected to boost the prevalence of cancer and other chronic diseases among the population. The rising government investments in the development of advanced healthcare infrastructure and rising access to the better healthcare facilities is expected to drive the growth of the Asia Pacific monocl0onal antibodies market in the forthcoming future. Moreover, the rising geriatric population will have a positive impact on the sales of the mAbs in the upcoming future. According to the United Nations, the global geriatric population is expected to reach around 1.5 billion by 2050 and about 80% of them will be living in the low and middle income countries.

Some of the prominent players in the global monoclonal antibodies market include: