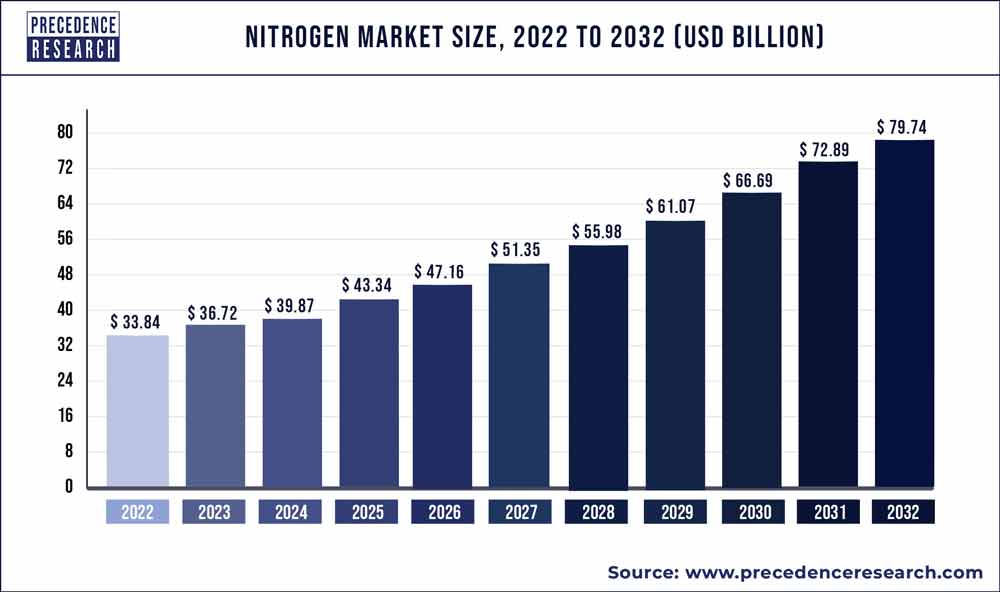 The nitrogen market consists of the sales of industrial nitrogen and related services used in a variety of applications, including steel manufacture to stop oxidation and food packaging in the food sector to avoid food spoiling.

Mechanical severance or fractional refining of air yields industrial nitrogen, a very pure element. It is frequently found in gaseous or liquid form and is utilized in a wide range of end-use processes, including those in the manufacture of metal, food, beverages, chemicals, and agrochemicals. The requirement to maintain the quality and safety of processed food items has increased significantly as a result of the expanding population, especially in developing countries.

Report Scope of the Nitrogen Market

On the basis of product type, the compressed gas segment is expected to have the largest market share in the coming years period this segment has dominated the market in the past with the maximum share in terms of revenue and it will continue to grow well in the coming years. The main element of an industrial gas system is compressed nitrogen gas. Cryogenic fraction distillation is a commonly utilized technique in the manufacturing of high-purity industrial gates. Throughout the projection period, there is expected to be an increase in the demand for compressed nitrogen gas for cylinder systems used in membrane separation, pressure swing adsorption, and cryogenic fractional distillation.

Foods are frequently widely and deeply frozen using liquid nitrogen, which is created via a process called cryogenic distillation. Liquid nitrogen is frequently used to preserve food, biological, and medicinal items because of its quick cooling properties and safety when added to food ingredients. Additionally, it is inert and non-toxic to food items and their constituents, which is anticipated to boost market demand.

On the basis of application, the industrial nitrogen segment is expected to have the largest market share in the coming years period, the segment has dominated the market and it will continue to grow well in terms of revenue. Industrial gas producers are increasingly turning to pressure swing adsorption (PSA) technology as a low-cost, highly effective way to manufacture nitrogen.

On the basis of adsorption, PSA systems work. They are composed of adsorption tanks filled with carbon molecular sieves (CMS), which may collect carbon dioxide and lingering moisture. As a result of CMS's ability to selectively adsorb oxygen at high pressures, nitrogen may flow through with the necessary level of purity. Compared to conventional cryogenic distillation or liquid nitrogen storage, nitrogen may be generated on-site utilizing PSA devices more affordably. For the low-cost nitrate manufacturing, Mahler AGS, a German producer of on-site gas generating facilities, uses PSA systems. PSA systems are being used by significant industrial gas producers to increase nitrogen output, including Linde, Air Liquide, and Praxair.

On the basis of end user, the segment of food & beverages has emerged as a dominant market due to the huge demand of nitrogen in the industry. To keep commercially produced food items fresher for longer, nitrogen is employed in modified environment packaging. It also benefits in the packaging and storage of food and beverages by maintaining freshness and extending product shelf life. Additionally, nitrogen is utilized in food packaging and is primarily employed in the winemaking process to eliminate and stop oxygen from coming into contact with the wine.

In order to avoid oxidation, which can cause the wine to lose quality, food-grade nitrogen should be used. Moreover, beer, wine, and water are among the still and fizzy beverages that benefit from the packing of nitrogen.

On the basis of geography, Asia-Pacific is expected to continue to be among the most alluring markets, and this region is accounted for the majority revenue share in the market throughout the projection period. The major portion of the global nitrogen market is located in Asia Pacific. This can be a result of the area's quick growth and expanding population. Furthermore, it is anticipated that this region's healthcare system would improve over the next years, which will increase demand for nitrogen. 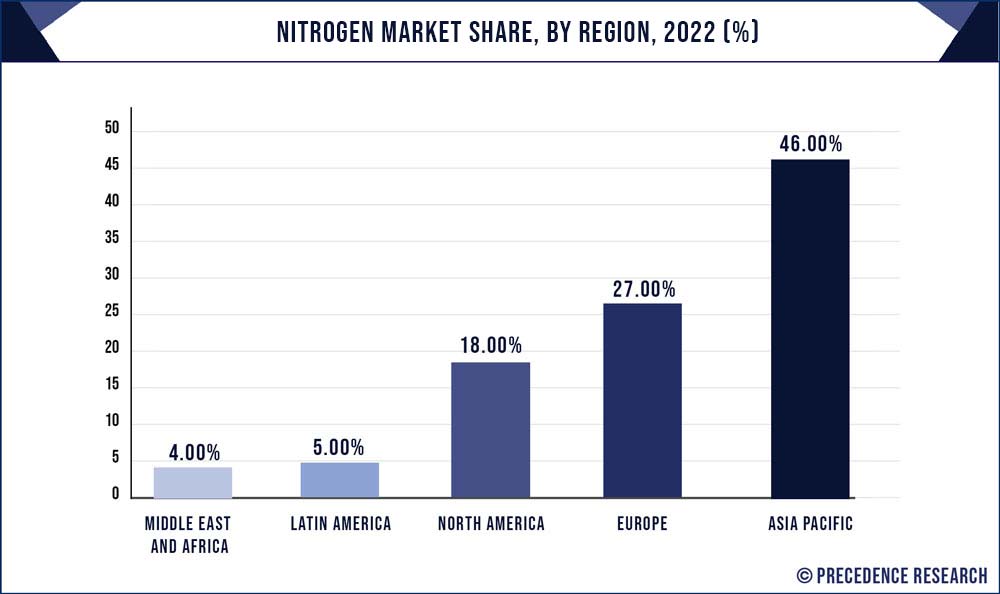 Additionally, the growing use of ammonia-based fertilizers in agricultural nations to increase soil fertility is anticipated to fuel market growth throughout the course of the projected period. Additionally, the rapid rate of industrialization is anticipated to fuel market growth in the area, particularly the expansion of end-use sectors like food and beverage. The use of improved nitrogen production techniques also improves the market's prospects in the area.

The demand for industrial nitrogen is projected to mature in developed markets like those in North America and Europe. Therefore, throughout the projection period, these locations can provide unappealing additional prospects. The growing chemical and pharmaceutical industries will raise demand for liquid nitrogen, which is predicted to drive the market in Europe for liquid nitrogen over the forecast period.