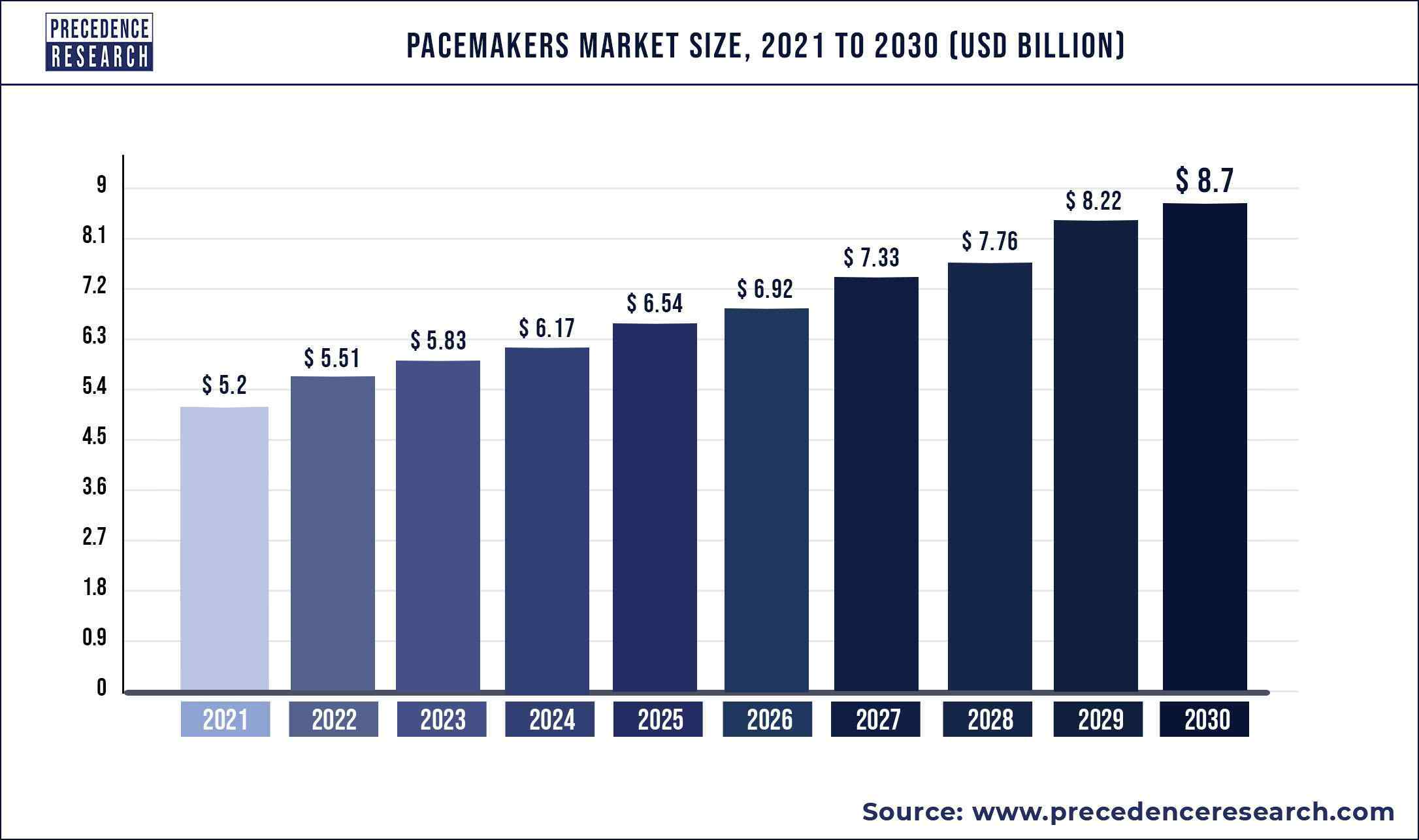 Pacemaker is characterized as the clinical gadget, which sends little driving forces to heart muscles to keep up with reasonable pulse or to animate the lower offices of the hearts. It is utilized for the treatment of syncope, congestive cardiovascular breakdown, and hypertrophic cardiomyopathy. The development of the worldwide pacemaker market is significantly determined by expansion popular for negligible obtrusive method, ascend in financing from private and government associations for the medical services area, and ascend in pervasiveness of cardiovascular sicknesses. As per Drugs and Diseases, in April 2020, it was accounted for that super durable pacemaker addition strategy is considered as the negligibly obtrusive method. In this way, ascend sought after for negligibly obtrusive surgery and expansion in reception of heart surgery, for example, endocardial or epicardial for the implantation of pacemaker drive the development of the worldwide market. For example, in 2020, Abbott Laboratories, an American worldwide clinical gadget and medical organization, has spent across $2.42 billion in the R&D area. As per the World Health Organization (WHO), in 2019, it was accounted for that 17 million people younger than 70 kicked the bucket because of respiratory failure.

The rise in geriatric populace is supposed to fuel the market development during the estimate time frame. This is ascribed to the way that matured people are profoundly helpless against cardiovascular illnesses. Besides, improvements in pacemaker move the development of the market. For example, in January 2020, Medtronic Plc., a clinical gadget organization, reported the endorsement of Micra AV, which is the littlest pacemaker with atrioventricular (AV) synchrony. The micra AV is utilized for the treatment of patient experience the ill effects of AV block. Moreover, a scientist at Northwestern and George Washington Universities, in 2020, in the U.S., declared the send off of first transient pacemaker, which get disintegrated in the body after its utilization. The pacemaker is remote, sans battery, and totally implantable pacing gadget, which offers brief pacing without the need of ambulatory extraction. In this manner, the presence of vital participants in medical services clinical gadgets, good unofficial law for improvement of cutting edge pacemaker, and ascend in frequency of hypertension move the development of the market.

Rising occurrences of CVDs, inflating cost of cardiovascular illness the executives, ideal government approaches, and the send off of mechanically progressed pacemakers, for example, the MRI safe pacemakers and leadless pacemakers are mainly driving the development on the lookout. The rising weight of cardiovascular sicknesses is one of the vital variables for the development of the market. Coronary heart problem is one of the essential purposes behind CVD passings universally. The monetary weight of these sicknesses is expected to be more than USD 1,044 billion by 2030, which features the incredible requirement for heart pacing gadgets.

The novel Covid had seriously impacted patients experiencing cardiovascular illness. The spread of COVID-19 financially affected the medical services and clinical gadget industry. According to the American Heart Association, Circulation Journal, 2020, up to this point COVID-19 had impacted 185 nations and in excess of 30,00,000 patients worldwide. Among patients with COVID-19, there is a high commonness of CVD. Expanding request to work on understanding results for different pacemaker implantations, with improved and negligibly obtrusive systems is the key component driving the development of the pacemaker market. In addition, good repayment methods, like the Medicare framework in the U.S. also, NHS in the U.K. are among the key variables helping the market.

Clinical gadget organizations, for example, Boston Scientific Corporation and Medtronic are currently offering new products that are covered under repayment bundles, which benefit patients. Besides, associations are more focused on assembling very good quality pacemakers taking special care of redone care. These advancements are improving exactness, giving extra abilities to upgrade the work process, and working with mistake decrease. This is a critical move for routine remote subsequent meet-ups in the midst of COVID-19.

Report Scope of the Pacemakers Market

The internal pacemakers section held the biggest portion of over 61% of the pacemakers' market in 2021. The developing interest for these gadgets for the treatment of cardiovascular breakdown and arrhythmias as well as progressing clinical preliminaries is a main consideration prompting market development. In 2017 atrial fibrillation was the most widely recognized type of arrhythmia, influencing roughly 2.7 to 6.1 million individuals in the U.S alone according to the CDC. In this way, the market development is driven by a rising predominance of CVDs.

The dual chamber pacemaker fragment ruled the market in 2020, and is supposed to proceed with this pattern during the figure time frame, attributable to increment in commonness of bradycardia, presence of vital participants, and ascend in geriatric populace. In any case, the biventricular section is supposed to observe extensive market development during the conjecture time frame, attributable to increment sought after for remote checking administrations, ascend in pervasiveness of hypertension, and flood in number of cell phone clients. 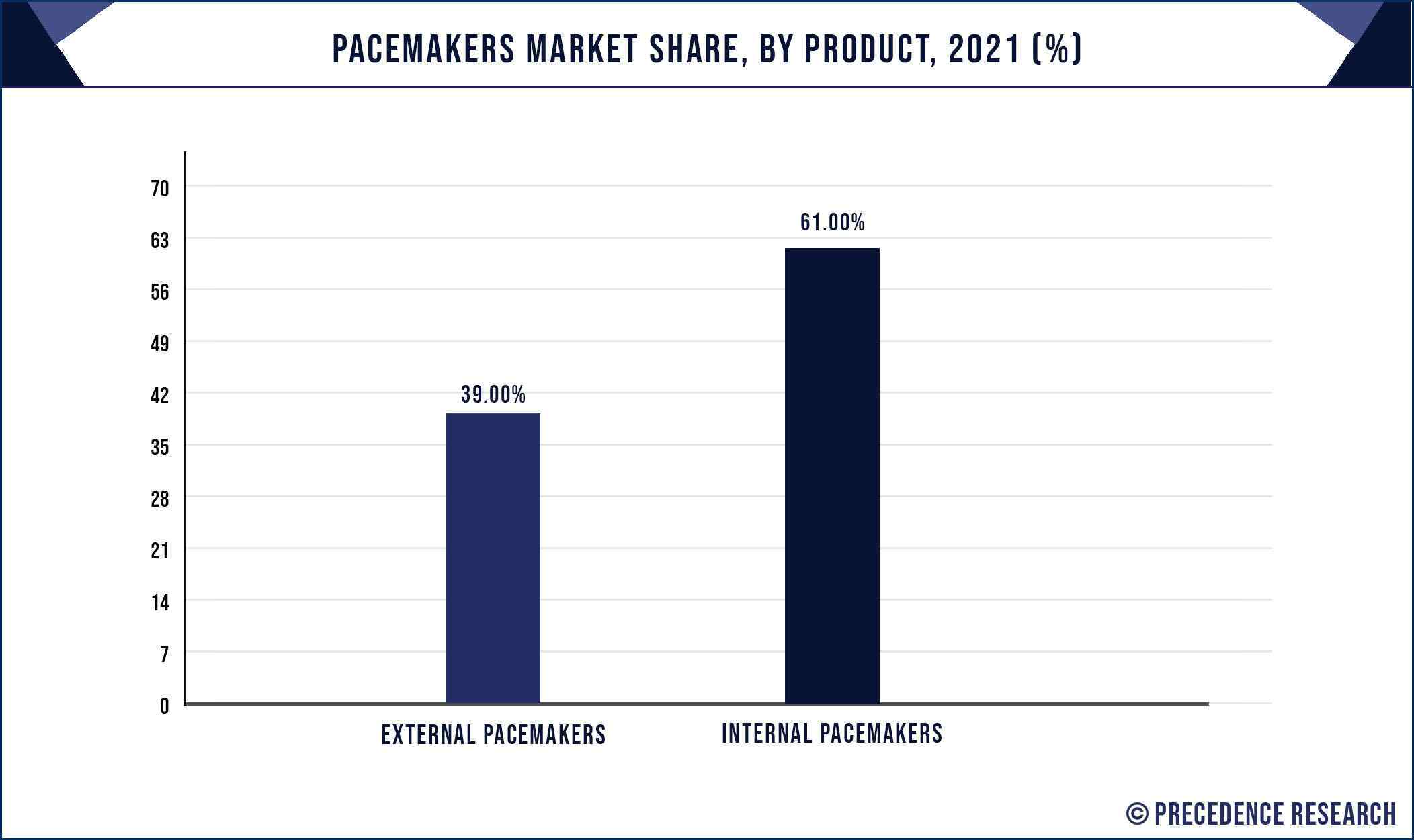 The external pacemaker section is supposed to show promising development during the gauge time frame because of the simple design, upgraded UI, and further developed low battery marker. Since outside pacemakers are painless, there is less gamble of postsurgical inconveniences. Furthermore, the gadgets are helpful for patients to track and record day to day heart capabilities. Moreover, outside pacemakers are the quickest accessible gadgets for synchronization of cardiovascular beat, as most would consider to be normal to fuel portion development. The presence of market players like Medtronic, Pacetronix, and Oscor Inc., managing in the external pacemakers' is additionally expected to impact portion development emphatically.

As far as income, the conventional pacemakers fragment ruled the market and represented the biggest income portion of more than 52% in 2021. This development is attributable to consistent upgradations, reasonableness, little estimated, and prolonged timeframe of realistic usability.

The market is sectioned into MRI compatible and customary pacemakers. The MRI compatible pacemaker fragment is supposed to show rewarding development during the gauge time frame. The high offer is inferable from expanded MRI-based finding. According to the Mayo Foundation for Medical Education and Research, 2018, roughly 75% of patients who are as of now having an implantable pacemaker will require MRI during their lifetimes. Thus, the section is seeing high development.

Based on implantability, the implantable pacemaker portion ruled the market in 2021, and is supposed to proceed with this pattern during the estimate time frame, attributable to increment in occurrence of bradycardia, ascend sought after for implantable pacemaker, and headway in R&D exercises in the medical care area. In any case, the outside pacemaker portion is supposed to observe extensive development during the conjecture time frame, attributable to increment in pervasiveness of coronary illness, ascend in the geriatric populace, and advancement of innovation in the medical services industry.

The arrhythmias portion overwhelmed the pacemakers’ market and held the biggest income portion of 38% in 2021. The fragment is additionally partitioned into atrial fibrillation, heart block, and long QT condition. Factors, for example, way of life issues, unnecessary liquor utilization, smoking, and weight are adding to the predominance of cardiovascular arrhythmia. According to the European Medical Group LTD, 2019, the absolute commonness of individuals with atrial fibrillation and atrial vacillate is 12,32,145 in the U.K. The congestive cardiovascular breakdown portion is the second-quickest developing fragment during the estimate time frame. According to the CDC, in December 2019, almost 6.5 million grown-ups in the U.S. experience the ill effects of cardiovascular breakdown. Accordingly, expanding the frequency of cardiovascular breakdown has filled the interest for innovatively progressed pacemakers during the estimate time frame.

North America ruled the market for pacemakers and represented the biggest income portion of around 43% in 2021. This development is inferable from the rising old populace with heart issues, the presence of central participants, fast mechanical headways, for example, MRI viable pacemakers, Bluetooth empowered pacemakers, and working on administrative endorsements. The rate of cardiovascular problems, like heart failures, congestive cardiovascular breakdown, and arrhythmias is expanding quickly in the U.S., which is further driving the interest for pacemakers in the district. Additionally, mechanical progressions in the medical services area and the rising number of heart-related medical procedures are driving the market in the locale. 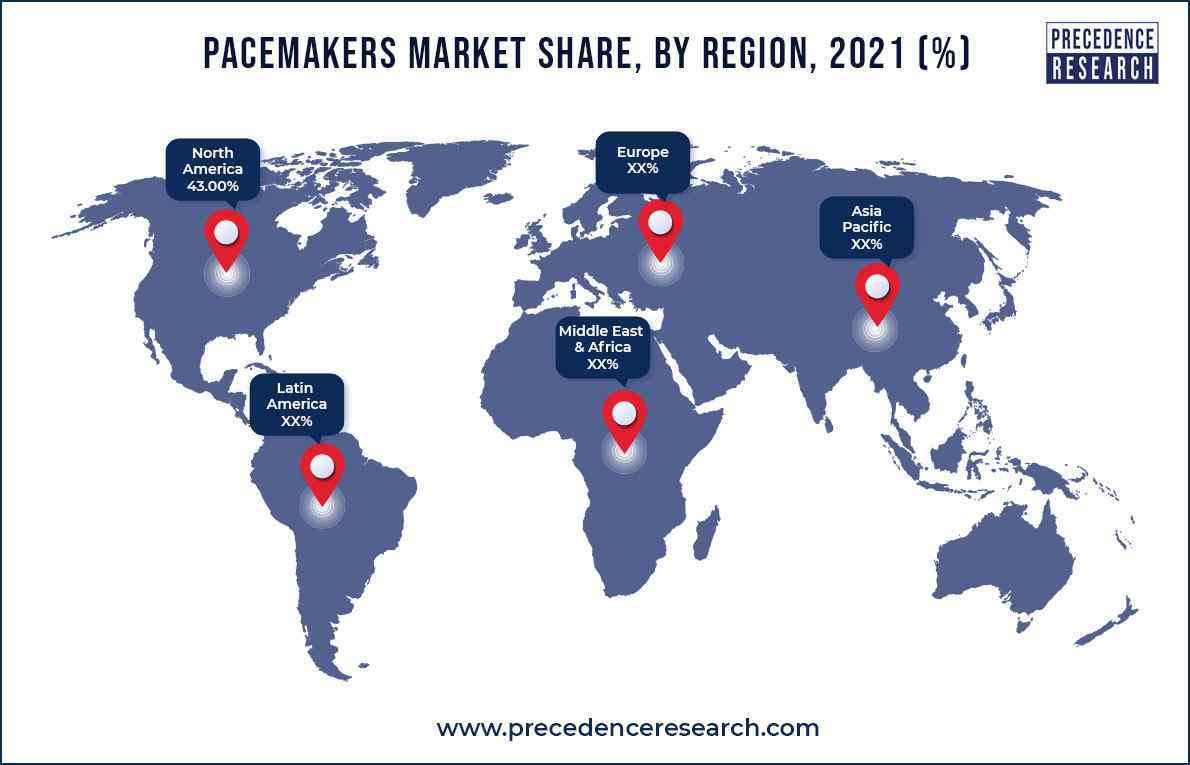 In Asia Pacific, the market is probably going to show a rewarding CAGR of around 4.9% over the assessed period. This development of the market in the locale is attributable to advertise entrance by the vital participants, and monstrous undiscovered open doors are driving the development. Besides, interests in the medical care area, particularly in Japan, China, and India have gotten momentum. These nations are continuously centered on creating lively medical services offices for cardiovascular determination and therapy. Such factors are expected to drive market development before very long. Developing economies and populaces in agricultural nations including China and India are supposed to set out significant open doors for the market in the district.