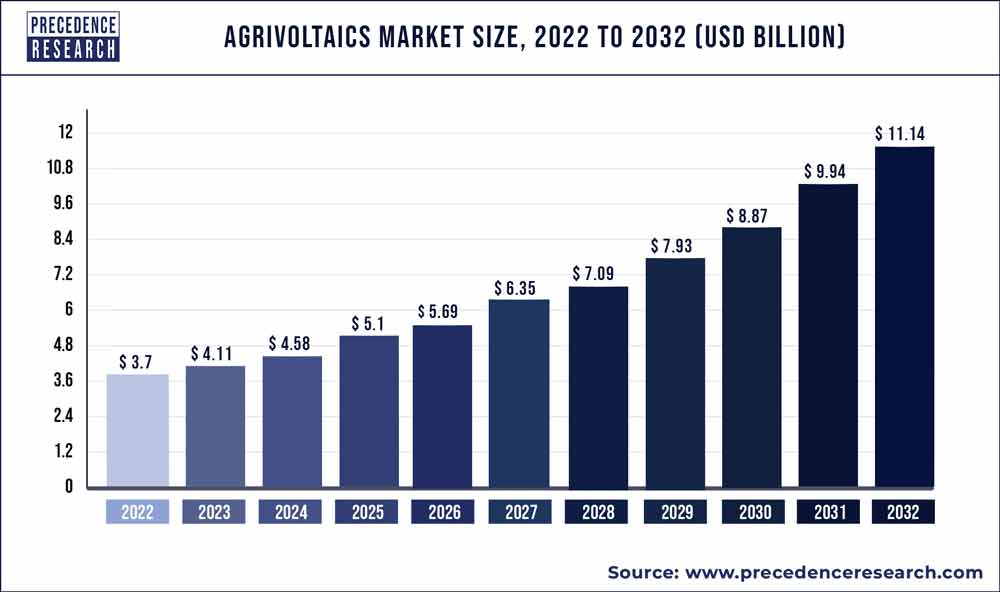 Agrivoltaics is a system that involves the simultaneous use of land for agricultural production as well as for photovoltaic production. A growing global population, limited arable land, and growing energy demand are booming the size of the agri-electricity market. In addition, a significant increase in food production is expected due to the increasing food demand of the people during the forecast period. Increased food production advancement and reduced water usage for farming combined with justifiable energy generation and additional income from photovoltaic panels are the key factors supporting the growth of the market.

Furthermore, the increased need to focus on recent climate change as well as humanity crises with agrivoltaics solutions is anticipated to endure the rising food production demand, reduced water consumption in agriculture and augmented efficiency of electricity production. Thus, the above-mentioned factors are expected to fuel the demand for agrivoltaics market during the forecasted period owing to the increased advantages of agrivoltaics. Approximately 100,000 households require over 48 hectares of the farmland area in terms of power requirement. The cost of the solar panel is expected to decrease in the upcoming period all across the globe, that also includes the overall expenses of installation cost of agrivoltaics systems. Thus, the above-mentioned factors are anticipated to boost the overall growth of the agrivoltaics market during the forecast period owing to the increased need of addressing the strategic planning for tackling the climate change.

Additionally, farmlands have shown the fastest growth owing to the huge adoption of sustainable farming techniques which require reduced water usage and decreased wastage of natural resources. The favorable reimbursements by government and increased dependence on farmlands for efficient crop production are anticipated to witness a significant growth in forecast period. Furthermore, Solar power is currently being used for agricultural technologies majorly by the energy sector. The rapid increase in solar power generation is expected to observe the increased global investment. Solar energy observed the increase of 50% increase in its market share of the overall global electricity generation capacity. This is expected to surpass the growth due to the gas, wind, and other renewable technologies. Since 2008, the cost of solar photovoltaic panels makes up the mainstream league of the capital expense in solar systems that utilize technology, which has decreased by 80% over the span of years. Manufacturing competition and innovation have been accelerated, especially the Chinese manufacturers have witnessed a dramatic increase in their market share.

Report Scope of the Agrivoltaics Market

Agrivoltaics is the combination of crops and solar or photovoltaic panels on the farmland. Agrivoltaics includes plantation of crops with the photovoltaic panels which are installed on specific height to allow passage of agriculture machinery such as tractor trailer, harvester, leveler and others. The dynamic agrivoltaic segment is a production system which is controlled according to the physiological requirements of crops. The system includes designing the dedicated structure as well as specific software development to manage the complete system of photovoltaic panels placed above the crop plantation. The increased environmental benefits, growing financial convenience to farmers in terms of passive income has also emerged as major growth factors for agrivoltaics market.

On the basis of crop type, the agrivoltaic market is segmented into root crops, leafy greens, and fruits. The leafy green segment is expected to contribute the increased market share during projected period. The agrivoltaic system is suitable for those crops which require limited sunlight such as kale, lettuces, peppers, tomatoes, chard, broccoli and Brussels sprouts grow efficiently with the assistance of agrivoltaic technology.

On the basis of geography, the region of North America has acquired the largest market share resulting from the huge number of technological interventions in agricultural techniques. Additionally, the presence of advanced agricultural machinery and equipment in this region has helped the agrivoltaics market to a great extent. 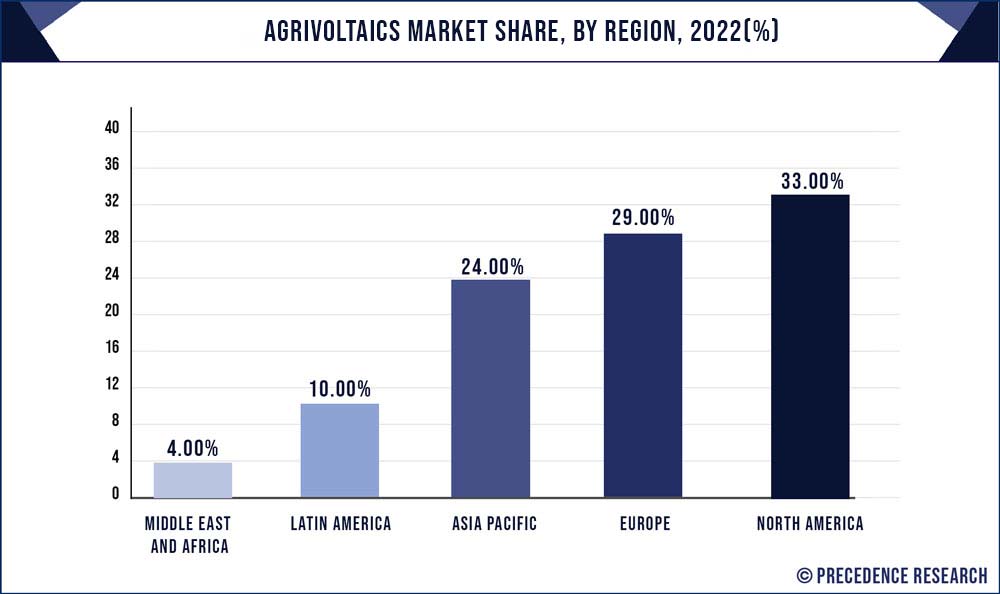 Furthermore, Europe has accounted for the largest market share to the agrivoltaics market due to the major shortage of the farmlands expansion as well as growing adoption of agrivoltaics system in the European region are anticipated to fuel the crop efficiency as well as production of food. Moreover, North America has arisen as one of the largest markets for agrivoltaics in terms of revenue values after Europe. However, Asia-Pacific is also expected to be one of the fastest growing sectors during the forecast period in terms of fastest CAGR growth.

By Type of Agrivoltaic Plant

By Type of Solar Panel