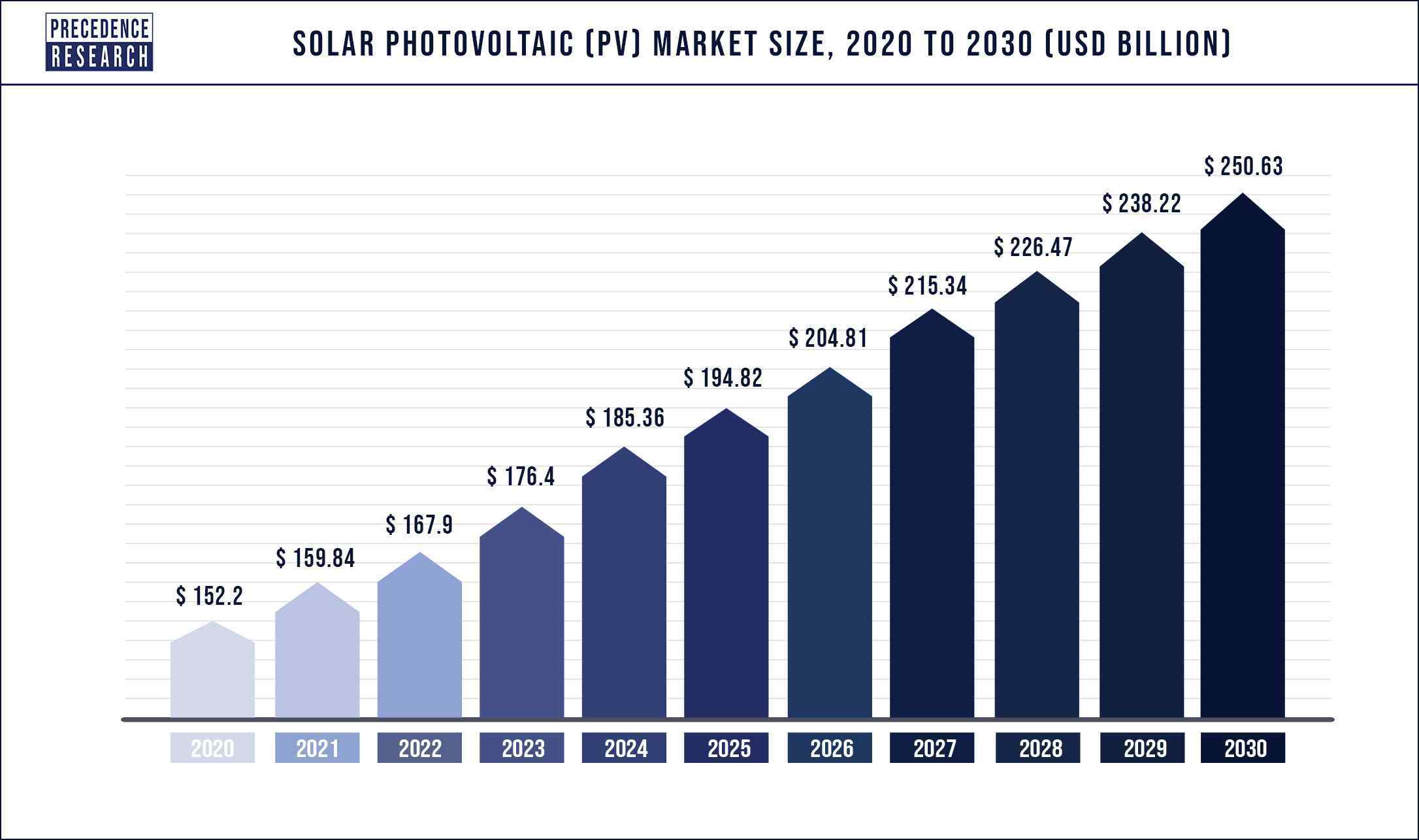 The solar photovoltaic (PV) is a simple technique that uses sunshine to generate electricity with no moving parts. The sunlight separates electrons from their host silicon atoms in a photovoltaic cell. The photons are tiny packets of light energy that are collected by electrons and provide enough energy to propel the electron away from its high atom.

The favorable government schemes and incentives, including as tax exemptions and tariffs, will strengthen the commercial outlook as well continued technology advancements and growing consumer and regulatory predisposition toward clean energy sources. The reduced solar energy prices, along with more financial support, will help the solar photovoltaic (PV) market to flourish. The product acceptance will be aided by broad resource availability and cost-effectiveness as well as increased industry potential. Various regulatory measures including asset and financial leveraging, subsidies, and other financial tools will be implemented to increase product acceptability. Furthermore, the implementation of many solar photovoltaic (PV) installation targets as well as shift in focus to reduce carbon emissions would propel the solar photovoltaic (PV) market growth during the forecast period.

The demand for solar photovoltaic (PV) will rise as a result of recent technology developments and research & development operations for efficient power generation across large scale solar applications. The market for crystalline solar photovoltaic (PV) will be boosted by a significant increase in solar deployment rates as well as favorable government renewable energy goals. The corporate landscape will be further impacted by a radical shift toward profitable new product developments, manufacturing precision, optimization, and standardized product methods for power production, lower emissions, and cheap installation costs.

Scope of the Solar Photovoltaic Market

In recent years, the solar sector has seen a number of rapid technological advancements. The photovoltaic is a relatively new solar material with a favorable crystal structure for sunlight absorption. The solar photovoltaic (PV) cells also perform better than silicon cells at lower light intensities such as on rainy days, allowing for higher conversion rate. The fundamental advantage of using photovoltaic (PV) to make solar cells is that it is a cheap and readily available material that might create low-cost solar power. The solar photovoltaic (PV) cells may also be made in very thin layer structures with high degrees of transparency, allowing them to be used in a number of unique applications such as building integrated photovoltaic projects and flexible panel designs.

However, over the projection period, the solar photovoltaic (PV) market is likely to be hampered by an increase in grid connection challenges and interconnection delays as well as insufficient grid capacity creating barrier to the construction of new solar plants.

In 2020, the monocrystalline silicon segment dominated the solar photovoltaic (PV) market. This form of solar panel is more prevalent in solar rooftop systems and is frequently utilized for large scale installations, whether they are residential, commercial, or residential.

The thin film segment, on the other hand, is predicted to develop at the quickest rate in the future years. The thin-film technology has always been less expensive than traditional technology, but it has also always been less efficient. Nevertheless, over the period of time, it has vastly improved.

The ground-mounted segment dominated the solar photovoltaic (PV) market in 2020. Due to increased efficiency, the quantity of installations, ground mounted solar for utility or commercial projects, maintenance and operation efficiencies are quite cost-effective.

The rooftop is fastest growing segment of the solar photovoltaic (PV) market in 2020. When compared to traditional energy sources, the solar rooftop model poses extremely little pollution threats to the environment.

The off-grid segment, on the other hand, is predicted to develop at the quickest rate in the future years. In emerging and remote regions, the use of off-grid solar photovoltaic (PV) systems is steadily expanding during the forecast period.

In 2020, the utility segment dominated the solar photovoltaic (PV) market. Several large-scale solar projects are now under construction around the world.

The residential segment, on the other hand, is predicted to develop at the quickest rate in the future years. This is driven by an increase in residential construction projects and a growing public awareness of the benefits of using efficient and renewable energy sources.

Asia-Pacific, on the other hand, is expected to develop at the fastest rate during the forecast period. The increased demand for more power generation capacity as well as continued international engagement, favorable foreign direct investments, and the establishment of capacity quota targets, will have a beneficial impact on technological acceptability.

The mergers and acquisitions, partnerships, new product development, business expansions, collaborations, supply contracts, agreements, and contracts are some of the important marketing strategies used by the major market players to maintain their market position. The major market players are diversifying their product line by creating industry specific products and solutions.

Some of the prominent players in the global solar photovoltaic (PV) market include: