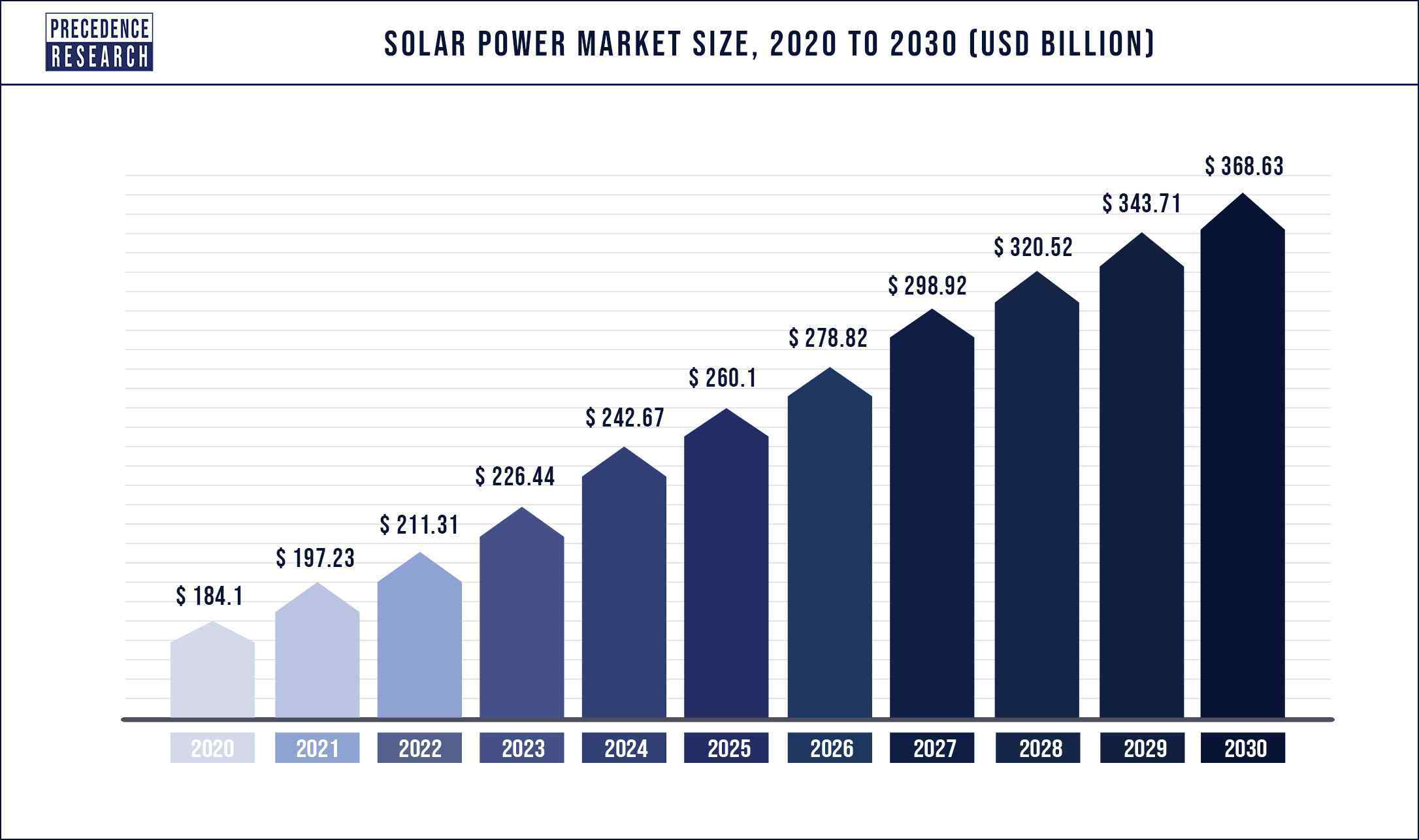 Solar energy is the radiant energy emitted from the sun, which is exercised by using numerous technologies similar as photovoltaic cells, solar heating, and others. It's an effective form of unconventional energy and an accessible renewable solution toward growing greenhouse emigrations and global warming. The growth of the solar energy market is majorly driven by rise governmental provision of impulses & duty rebates to install solar panels and environmental pollution. In addition, drop in footprint of water is associated with solar energy systems has propelled their demand in power generation sectors. The solar cells demand has gained huge traction due to rise in rooftop installations, which is further followed by rise in operations in the sector of architecture. Likewise, the demand for solar power halls and parabolic troughs in the generation of electricity is anticipated to propel the concentrated solar power systems demand in the market. One of the prominent factors contributing towards the growth of the global solar power market is the growing prices of fossil fuels. The growing environmental concerns regarding greenhouse gases and carbon emissions. In addition, the growing government initiatives and favorable policies in order to curb the adverse effects of the toxic gases emissions is driving the growth of the global solar power market during the forecast period.

The solar energy market growth is driven by rise provision of government incentives and tax rebates in order to install solar panels and growing environmental pollution. Furthermore, decrease in footprint of water associated with systems of solar energy has driven their demand in the sectors of power generation. The solar cells demand has gained huge traction due to rise in rooftop installations, which is further followed by rise in architectural sector applications. In addition, the demand for solar power towers and parabolic troughs in the generation of electricity is expected to propel the demand for concentrated solar power systems.

Solar energy has endured spectacular growth over the once two decades. But the crises caused by the COVID-19 could vastly disrupt this momentum. Further, governments will be central more than other while determining the pace of deployment of solar energy and diving these challenges in the upcoming time period.

Based on the technology, the Photovoltaic (PV) systems segment dominated the global solar power market, garnering a market share of around 70% in 2020. Photovoltaic systems can differ greatly in terms of size from portable systems or small rooftop to utility-scale generation plants massive in nature which is attributing to high market demand of photovoltaic system.

On the other hand, the concentrated solar power systems segment is estimated to be the most opportunistic segment during the forecast period. The growing requirement of solar energy is huge amount is making this segment the fastest growing in the solar power market.

Asia Pacific was the leading solar power market that garnered a market share of more than 30% in 2020. Asia Pacific is the home to more than half of the global population which provides a huge consumer base. Furthermore, China, Japan, South Korea, and India are the top countries among the highly utilizing solar power countries. The rapid urbanization, rising disposable income, busy and hectic lifestyle, the rising penetration of the internet, and the increasing adoption of the smartphones are some of the significant macroeconomic factors that drives the growth of the solar power market in Asia Pacific. Moreover, the presence of huge youth population and the rising demand for renewable energy and sustainable development again fostering the market growth. The countries like China and India are showing promising growth opportunities for the market players owing to the strong economic growth in the region. 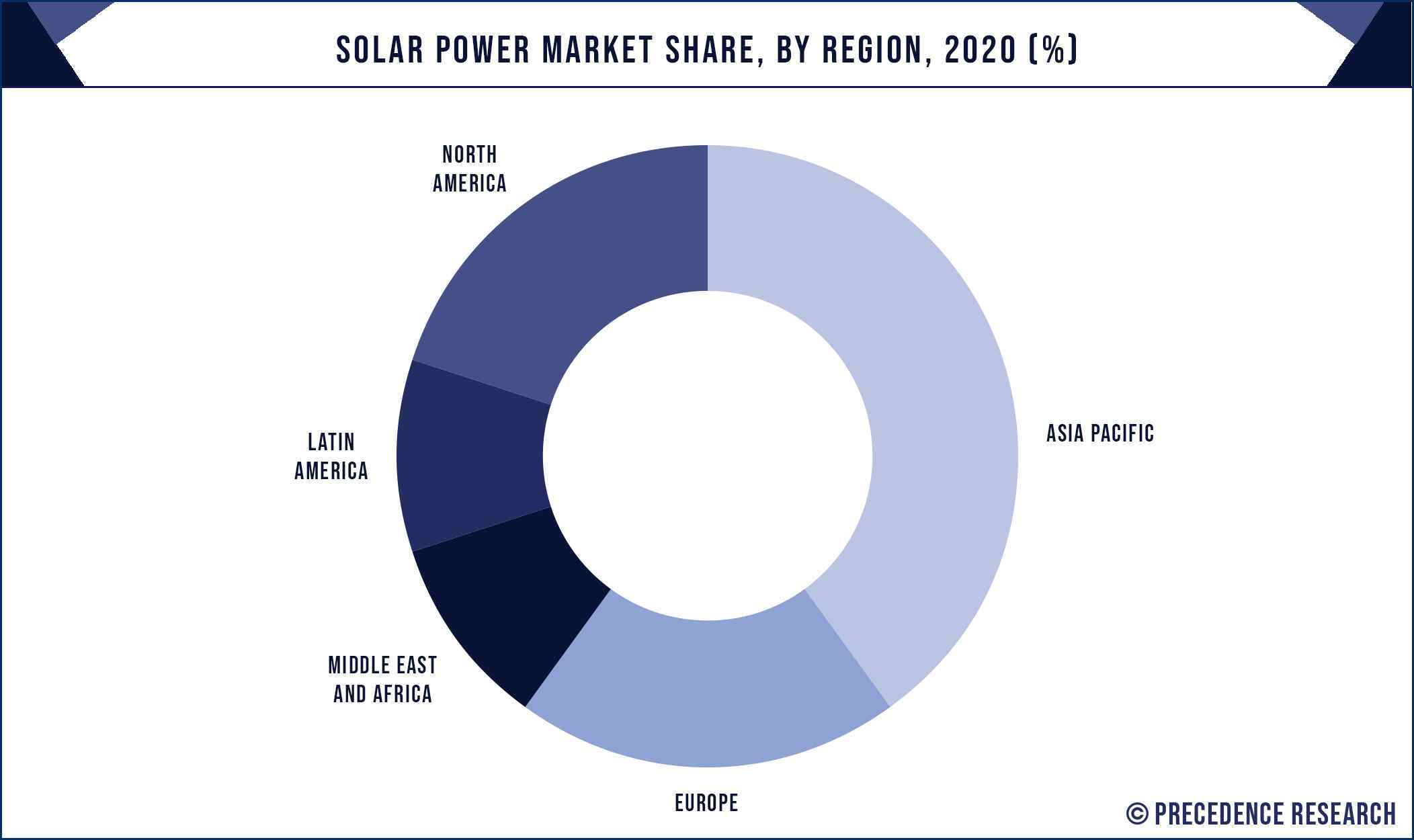 North America is estimated to grow at a considerable pace during the forecast period. U.S. is the prominent country with major share of solar power consumption in the region. In addition, increasing buying power, improved access to the digital technologies, higher penetration of internet, and increased adoption of the smart devices are some of the major factors that has propelled the growth of the North America solar power market.

Some of the prominent players in the global solar power market include: