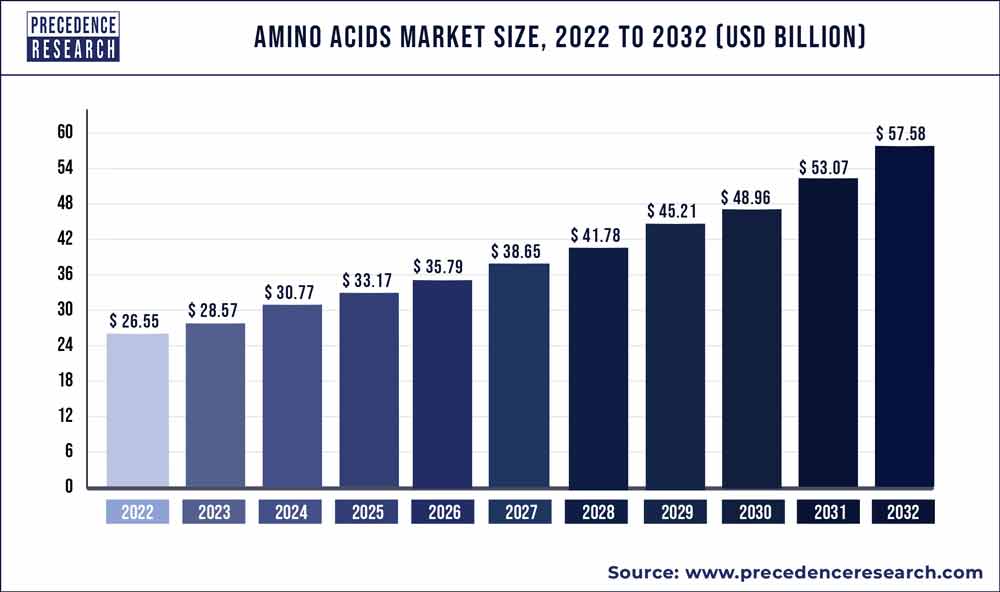 During the projected period, demand for amino acids is expected to be driven by rising consumer awareness of leading a healthy lifestyle and rising meat and animal products consumption. The creation of proteins requires amino acids, which are also responsible for ensuring that the human body functions properly. They advocate for enhancing metabolism, avoiding muscular deterioration, and reducing the danger of cardiovascular diseases. These characteristics make them popular in the healthcare industry for use in nutritional and therapeutic applications.

Commercially, amino acids are produced via fermentation, extraction, and chemical synthesis from a variety of plants and animals, including soybean, corn, wheat, blood, skin, and hair. Globally, research and development efforts are being made to increase the quality and yield of extracted amino acids.

Demand for nutritious foods has increased as customers' awareness of their health has grown. This has encouraged food and beverage producers to release goods enriched with important nutrients, like amino acids, which has increased consumer demand for them. In addition, in order to improve their performance and muscle growth, bodybuilders as well as athletes are increasingly favoring protein-rich goods. Sports supplements, nutrition bars, energy drinks, low-carbohydrate foods, and nutritional supplements are a few of these items. Aside from that, amino acids are employed in animal feed to satisfy the animals' needs for protein. Additionally, the creation of proteinogenic amino acids, which are integrated into proteins during translation, has greatly benefited from ongoing biotechnology advancements.

Growing in popularity in the pharmaceutical sector

Due to the growing consumer desire for goods made from organically derived ingredients, the sector of plant-based raw materials, which had the biggest revenue share of 86.5% in 2021, is predicted to rise at the quickest rate throughout the forecast period. Wheat, corn, soybean, potato, and peas are a few examples of plant sources. Currently, because to its high consumption and extensive production, soybean is employed in the commercial development of the product. However, it is well recognised that processing soybeans change the mix of amino acids, which proves to be a significant issue when procuring raw materials. 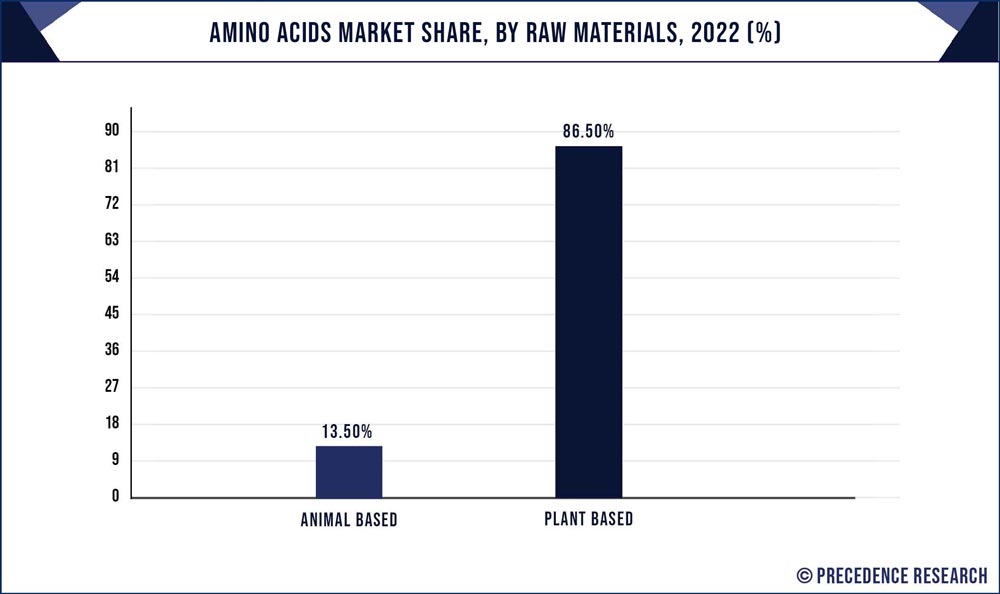 Lysine has lately experienced tremendous growth in popularity due to its significance as an amino acid. Since the human body is unable to generate this acid, demand is gradually rising due to the market for nutritional supplements. In addition to being ingested by humans, the substance has increased in popularity as a component in animal feed. Since lysine is predominantly used for body protein synthesis, an animals capacity for growth is directly impacted by its daily lysine consumption. By changing the dietary lysine concentration in line with feed intake capacity, animal growth, feed quality, and efficiency are maximised. Lysine demand is expected to rise throughout the forecasted period as a result of increased dietary supplement usage as well as expanding consumer demand from companies that make animal feed.

L-glutamate had the highest volume share of 49% in 2021, and it is expected that it will continue to lead over the projected period. It is widely utilised as a feed addition, taste enhancer, nutritional supplement, and as an intermediary in the production of organic compounds. The sodium salt of l-glutamate, monosodium glutamate (MSG), often known as seasoning salt, is extensively used in the food and beverage industry to enhance the flavour of food.

Rising customer requirements for processed food items and expanding product adoption in animal feed are likely to drive product sales in the amino acids market during the forecast period. As it is a vital amino acid, the demand for lysine has increased significantly in recent years. Since the human body is unable to produce this acid, the market for nutritional supplements is gradually driving greater demand for it. The product has grown in popularity as an animal feed ingredient in addition to being consumed by humans. Lysine is majorly used for daily lysine intake and body protein synthesis and has a straight effect on an animal's ability to develop. Animal development, feed quality, and efficiency are optimised by adjusting the dietary lysine content in accordance with feed intake capacity.

With a 43% revenue share in 2021, the poultry industry has the highest revenue share and is predicted to increase at the quickest rate. Broilers, turkeys, ducks, and chickens make up the poultry market. The poultry feed market is anticipated to be driven by growing demands for chicken and broiler meat in nations like the United States, Russia, and Mexico. This will lead to increased use of feed additives, such as amino acids like lysine and arginine.

The demand for chicken products in Asia Pacific and North America is being driven by the expansion of fast-food restaurants in these regions as well as the rising popularity of processed foods in these markets. Due to this, there has been an increase in poultry farming, which is fueling the need for chicken feed.

The application for food and dietary supplements had the greatest sector volume share of 57% in 2021, and it is projected that it would keep the lead throughout the projection period. In the food processing sector, amino acids are utilised as taste enhancers, preservative, and nutrition boosters. As flavour and taste enhancers, glycine & alanine are frequently utilised the market segment for animal feed is expected to hit the largest growth over the anticipated period. 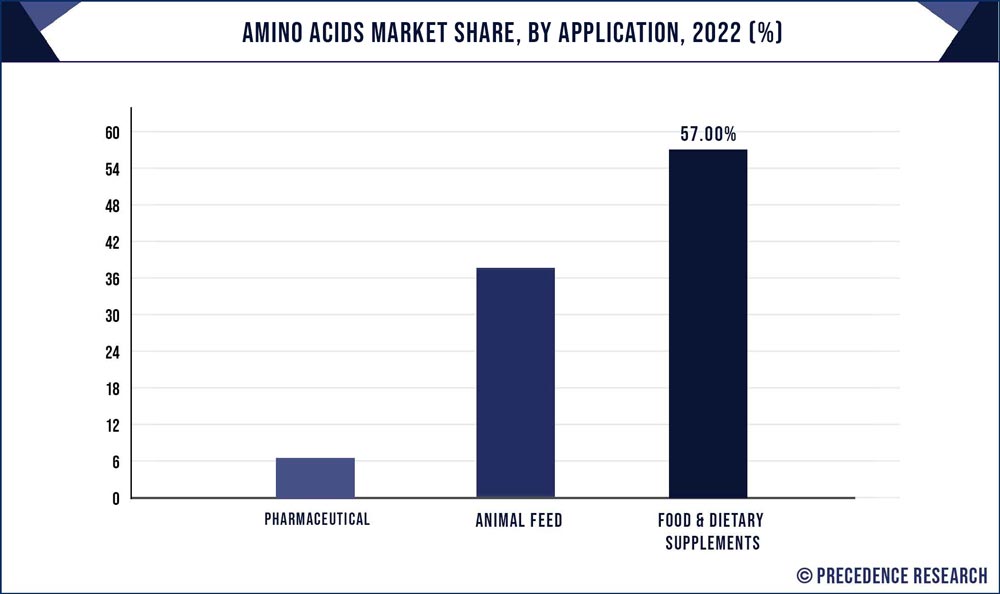 Animals feed formulations include amino acids as supplements to help with growth, reproduction, and their requirement for protein and other nutrients. Supplementing with amino acids improves feed conversion efficiency, which lowers feed costs per kilogramme of gain generated. Varying amounts of amino acids are furthermore needed based on the species or stage of animal development.

In 2021, Asia Pacific held the top spot in the market with a 48.7% revenue share. This may be attributed to an increase in consumer spending in the region, the spreading of a healthier life, and the rapid expansion of end-use industries including nutraceuticals, personal care, pharmaceuticals, and cosmetics.

Amino acids are primarily used to cure liver and cardiac diseases, as well as to slow down the degeneration and weariness of muscles. Amino acids are in great demand in the aforementioned nations due to the growing populations in rising economies like China and India and the existence of a young population.

Over the past several years, the consumption of meat has surged in European nations including France, the U.K., Germany, and Italy.