The global antiseptic and disinfectant market size was estimated at USD 48 billion in 2021 and is expected to surpass around USD 69 billion by 2030, poised to grow at a compound annual growth rate (CAGR) of 4.11% during the forecast period 2022 to 2030. 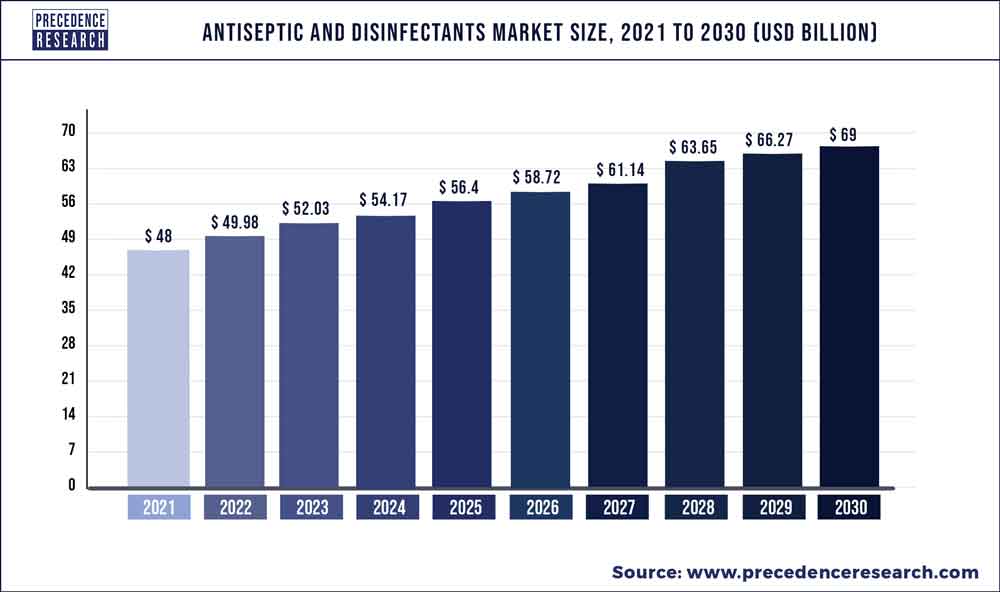 Disinfectants and antiseptics are also utilized on a large scale in the hotel industry where the importance of sanitation is of a very different level as it plays a primary role in attracting potential consumers. The huge demand of disinfectants all over the world has emerged as a major growth factor for the market. The outbreak of the pandemic had considerable impact on the growth of the antiseptic and disinfectants market as people took greater care for sanitation. This was done with a view to control the spread of infection through contact.

The increasing prevalence of infectious diseases which are life threatening has emerged as a major growth factor for the market. The geographic population residing all over the world are prone to infectious diseases and hence special care needs to be taken with a view to protect them from diseases. Extensive research and development programs which are carried out by the key market players with a view to introduce new and effective products in the market has helped to boost the size of this sector to a great extent. The huge investments which are made by the key market players for boosting the level of products has also proved to be a major reason for the growth of the market.

The outbreak of the pandemic proved to be a major growth factor for the disinfectants and antiseptic market is it created havoc among the people due to the huge mortality rate. The increasing need for disinfection to prevent spread of diseases through contact add help to boost the size of the market to a great extent. higher disposable income which is available with the people encourage the use of modern products.

Report Scope of the Antiseptic and Disinfectants Market

Strict government guidelines - Numerous rules and regulations have been introduced by the government regarding the introduction of antiseptic and disinfectant products into the market. The new products that are produced with a view to introduce in the current market have a direct impact on the health of the individuals and hence need to be reviewed thoroughly to ensure their efficacy. It becomes very important on the part of the government to ensure that the products that are introduced into the market perform suitably and prevent the spread of diseases. Products that might be harmful for the environment or the people cannot be sanctioned and hence the market faces a major challenge during its growth phase.

On the basis of type, in this segment of alcohol and aldehydes has emerged as the largest market due to the huge demand experienced from the market. The outbreak of the pandemic had a considerable impact on the growth of the alcohol and aldehyde segment due to the increasing need for disinfectants and antiseptics that could provide maximum sanitization. The requirement for sanitation was at its peak during the course of the pandemic with a view to avoid the spread of infection and control the rate of mortality caused due to it.

The huge number of people who are infected during the course of the pandemic had boosted the size of the antiseptics and disinfectant market and specially the segment of alcohol and aldehydes. A significant growth was presented by the segment of phenols and derivatives after this segment. The rapid use of sanitizers and antiseptics in the households and offices led to the increase utilization of phenols which mainly provided and aromatic fragrance to the sanitizers and disinfectants to maintain the ambience of the commercial spaces.

On the basis of end user, a segment of institutional user has emerged as the largest market due to its dominant position in the global economy as a result of its increasing demand in the market. Rapid research and development programs have been carried out by the key market players to introduce new products in the society that have a higher level of disinfecting capacity. The heavy usage of antiseptic in the healthcare sector which included clinics and hospitals led to the rapid demand of antiseptic and disinfectants. 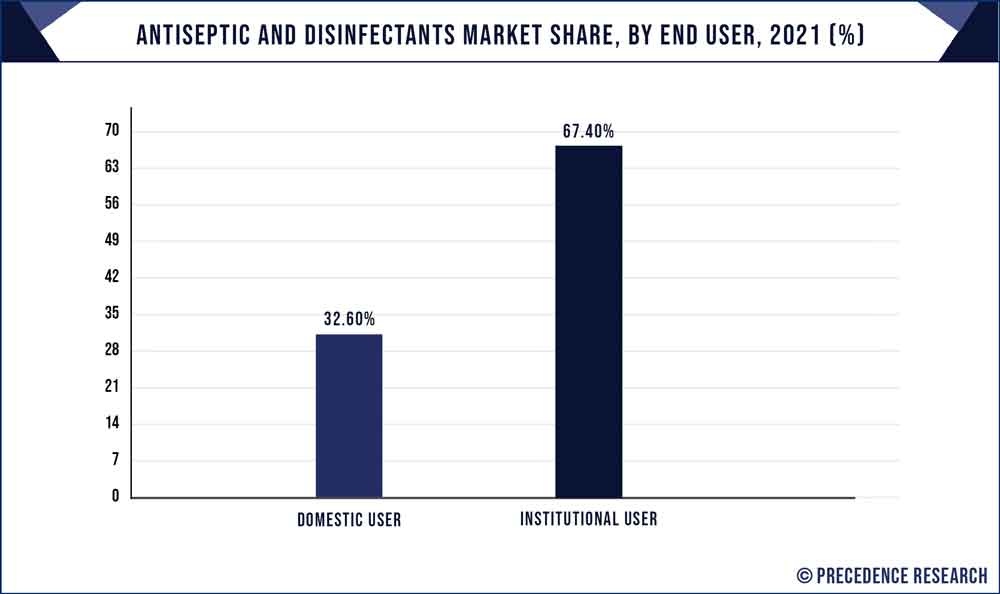 The domestic sector also experienced rapid growth as a result of the increasing need of antiseptics and disinfectants with a view to keep their vicinities safe.

On the basis of geography, the region of North America has emerged as the fastest growing market due to the huge demand of disinfectants and antiseptic owing to the presence of a highly developed healthcare sector which is supported by the government actively. The huge number of people who suffer with diseases in this region has also demanded the increasing use of disinfectants and antiseptics with a view to prevent you know spread of diseases and infection. The demand for disinfectants has increased during the recent years due to the outbreak of the pandemic which had shown a global impact on the society. Existence of the leading market failures in this region also emerges as a major factor for the tremendous growth of the market. The huge investments made by the key market players with a view to introduce new products into the market has emerged as a major growth factor for this market.