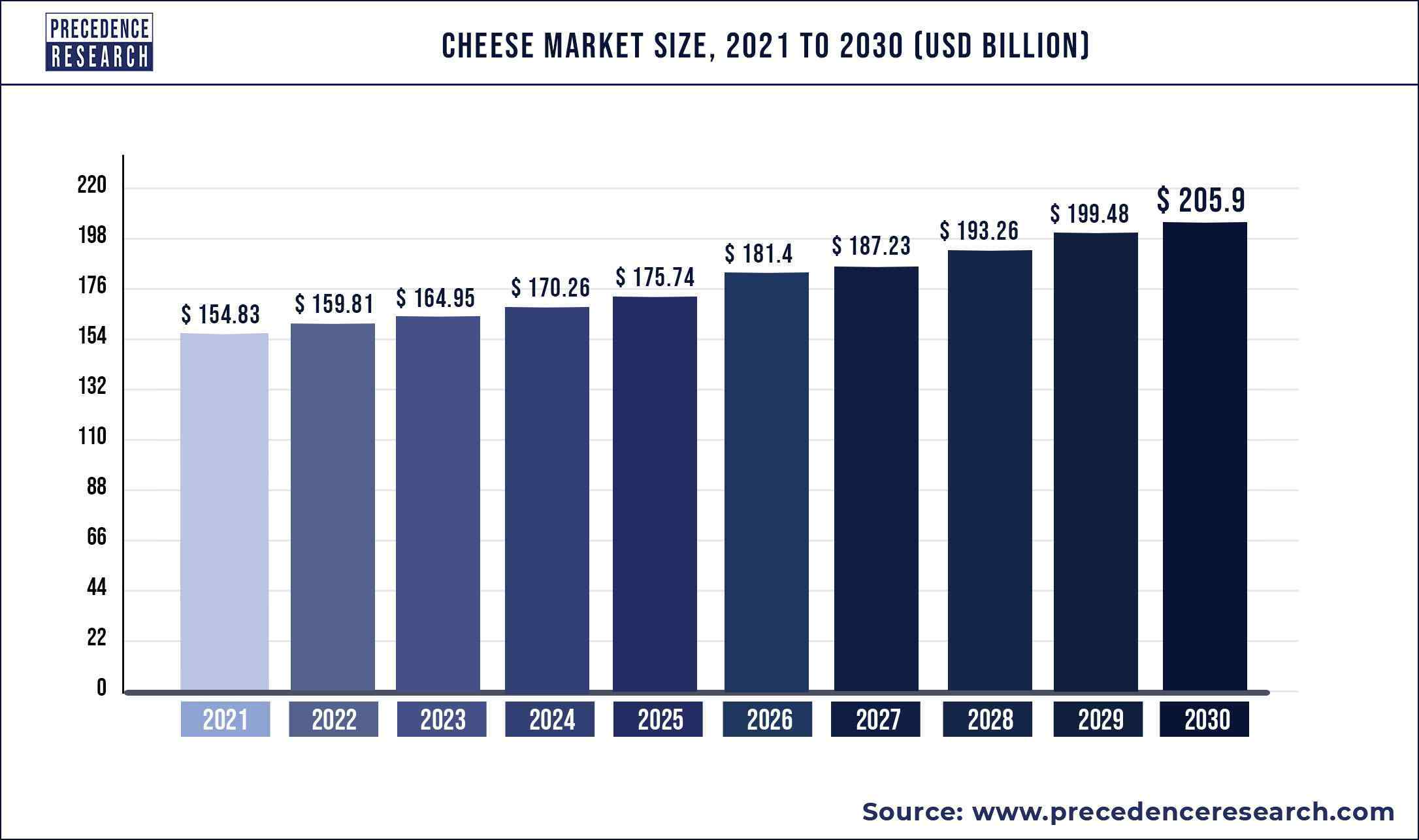 Cheese is inferred by handling of curd, which is matured further to deliver it with an unconventional surface, fragrance and flavor. Cheese creation involves corrosive, and enzymatic exercises, and maturing of cheese gives the ideal end result. Gotten from an assortment of milk sources like goat, sheep, bison, and cow, different cheese created incorporate blue cheese, feta, cheese, and mozzarella. The assortments of cheese are isolated based on their maturing period, and handling procedures.

The essential component supporting the development of the cheese market is the relentless requirement for accommodation food around the world. Deficiency of time for making elaborate suppers through customary strategies has been driving the reception of bundled food things, alongside simple and fast feast choices. Cheese market development is additionally impacted by the way that individuals utilize such items for planning quick and basic food things, making it more straightforward for them to adapt up to their everyday speedy system. What's more, a taking off number of working ladies, moving food propensities, and the ascent in buying force of individuals, especially in created economies, have by and large been fuelling the development of the cheese market.

Most of driving cheese market players are zeroing in on the extension of their presence overall by taking on key techniques. The presentation of creative items, appealing bundling techniques, and fascinating advertising efforts are some key extension methodologies of the main cheese market players. The cheese market is driven by the expanded consciousness of good wellsprings of supplements. What's more, the rising impact of western cooking styles and blowing up expendable livelihoods, and the presentation of a few seasoned cheese items including pepper, garlic, red bean stew chips, and oregano pickle, which take special care of the various preferences and inclinations of customers internationally.

The rising impact of western foods, swelling dispensable wages, and presentation of various enhanced cheese items, including pepper, garlic, red bean stew drops, and oregano pickle, drives the cheese market. In spite of the fact that cheese is a staple in Western nations, for example, Europe and the US, its flexibility empowers it to universally take special care of the various preferences and inclinations of purchasers. The foods of Western nations are assorted, despite the fact that there are normal attributes that recognize them from those of different districts. There are many assortments of cheese and other matured milk items utilized in Western foods. The impacts of quick westernization have prompted the rising interest for cheese in nations other than Europe and the US. A sharp expansion in shopper interest for bundled dinners containing cheese and rising interest from the food handling industry are likewise driving the market. In Asian nations, imports offered over 40% of generally speaking cheese consumed in 2020. The rising interest in Asian nations, driven by fast urbanization will drive the development of Asian cheese market.

Be that as it may, the cheese market will observer the controls of key factors, for example, the enormous measure of fat substance, which thusly has restricted its utilization among the corpulent populace. In addition, extreme utilization of cheese brings about different adverse consequences on human wellbeing including heart failures, and an expansion in cholesterol levels. There has been a significant flood in mindfulness about the evil impacts of higher cheese utilization among shoppers over the new past.

Report Scope of the Cheese Market

Cheese is one of the numerous assortments of cheese, which is grayish and has a sharp taste with a generally hard surface than some other assortment. This classification of cheese is most famous in European nations. Cheese was begun in a modest community called Cheese in the Somerset district, which is in southwest England. This sort of cheese is made through a cycle commonly called chasseing, in which curd and whey are isolated utilizing rennet catalysts. Numerous worldwide dairy cooperatives and organizations presently will generally add various flavors to cheese by adding paprika, spices, oregano, among others. Cheese tracks down application across a large number of ventures, including bread kitchen, soups, sauces, and plunges, prepared suppers, snacks and grains, and other food applications.

Cheese powder is generally utilized in sweet and exquisite snacks to prompt the messy flavor in them and give a more extravagant mouthfeel. In the flavorful tidbits and desserts section, cheese powder is significantly utilized in Mozzarella sticks, Nachos, popcorn, puffed bites, and chips. Cheese powder offers better usefulness and taste over different flavors and better comfort for use in a scope of nibble items. Buyers are presently more leaned toward cheap food and in a curry item subsequently, prompted an expansion in the interest for bites and quick food varieties, which has driven the organizations to think creatively and proactively while making snacks items.

Cheese powder is utilized in prepared suppers to add a particular cheese flavor to the feast or upgrade the current flavor in it. Application adaptability, flavor the executives, encompassing capacity, simple taking care of, and broadened time span of usability are a portion of the key advantages related with the utilization of cheese powders in prepared dinners. Because of the furious timetables and occupied ways of life of buyers, particularly the millennial populace, there has been an expanded interest for in a curry prepared dinner, which can be consumed right away. Adding a particular cheese note or flavor to such prepared suppers gives it a Western taste and nature, upgrading the items' worth and appearance. Food makers across the globe are benefiting from this pattern and putting resources into R&D to concoct inventive cheese based prepared dinners that can take special care of the developing interest.

Cheese powder bestows an upgraded cheese flavor to sauces, dressings, plunges, and fixings. This should be possible with the utilization of a solitary flavor cheese or a blend of more than one cheese flavors. The utilization of cheese powder likewise offers better taste, accommodation, and usefulness in recipes where high-temperature cooking is required. Sauces made utilizing cheese powder are generally eaten with pasta, vegetables, pizza, and dishes. They are likewise utilized as dressings on plates of mixed greens, vegetables, fish, and other meat items. Plunges and fixings produced using cheese powder is typically consumed with vegetables, wings, and seared snacks.

In 2021, North America and Europe altogether busy with almost 78% of the cheese piece of the pie. As of now, the worldwide cheese market development is driven ascent in number of speedy help cafés (QSRs) in the creating areas and right now settled QSR outlets in the created locales. Furthermore, longer time span of usability of cheese items, ascend in extra cash, and expansion sought after for protein-rich food move the market development. Nonetheless, undesirable added substances and fixings in handled cheese, and transient nature of the items are supposed to hamper the market development during the cheese market gauge period. 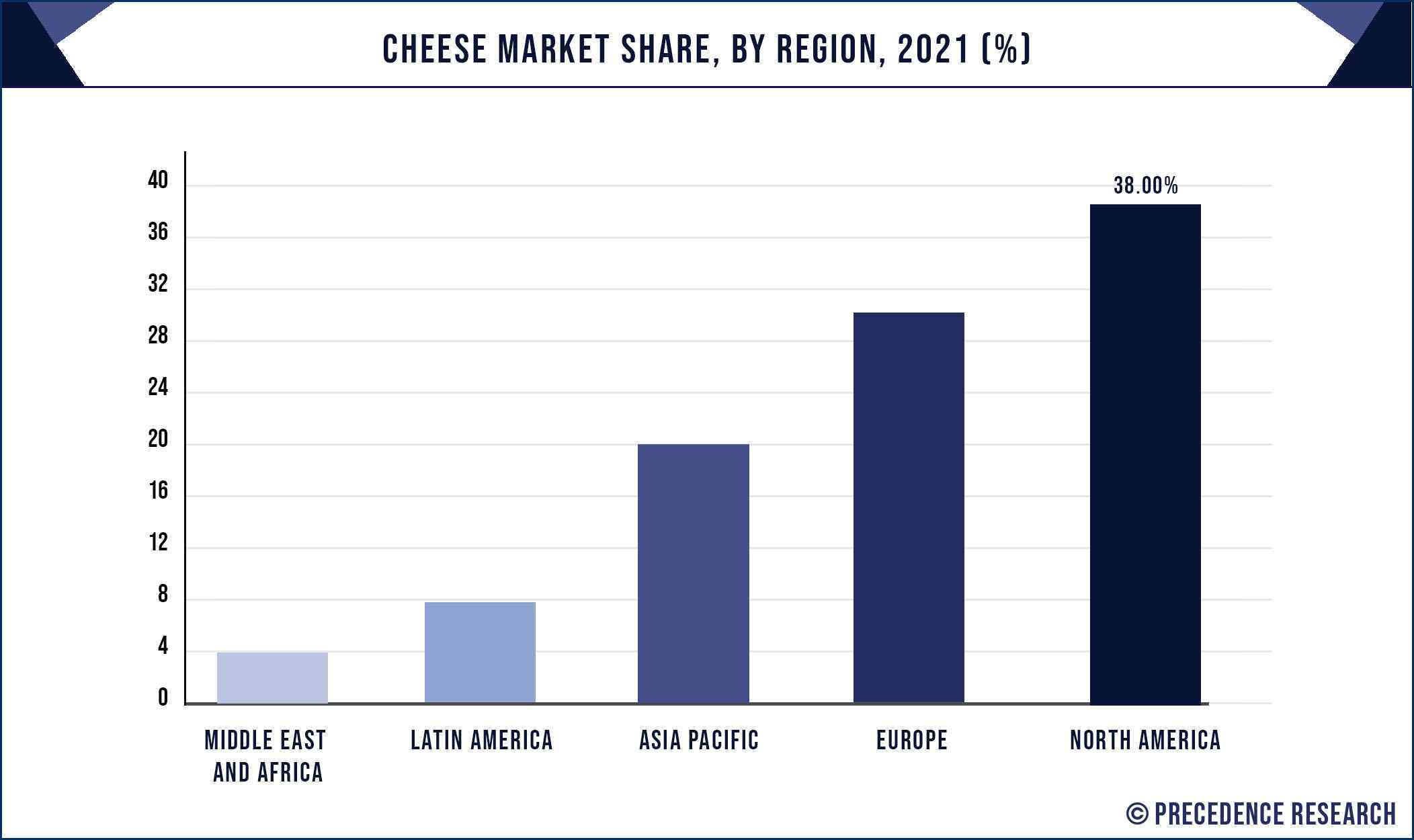 In the US, particular sorts of cheese have brought about flare-ups of food-borne gastroenteritis, food responsive qualities, lactose narrow mindedness, sensitivities, and fatty substance. According to a February 2022 MDPi diary, an everyday measure of 50 g of cheese (a standard serving of hard and semi-hard sorts) was related with a measurably huge 10% to 14% of higher gamble of Coronary Heart Disease (CHD). Purchasers have now become mindful of the relationship of these infections with cheese. This component is acting like a limit for different cheese makers to survive and satisfy the client need for quality food.

The rising utilization of pizza and other European-style quick food varieties shows up as a crucial purchaser pattern, especially among youngsters. Accordingly, the cheese market in Asia is amassed in enormous urban areas, where the normal top level salary portion of the populace essentially resides. A sharp increment has been seen in purchaser interest for bundled suppers containing cheese. Additionally, tax decreases and expanded duty rate quantities have brought down cheese costs, helping imports.