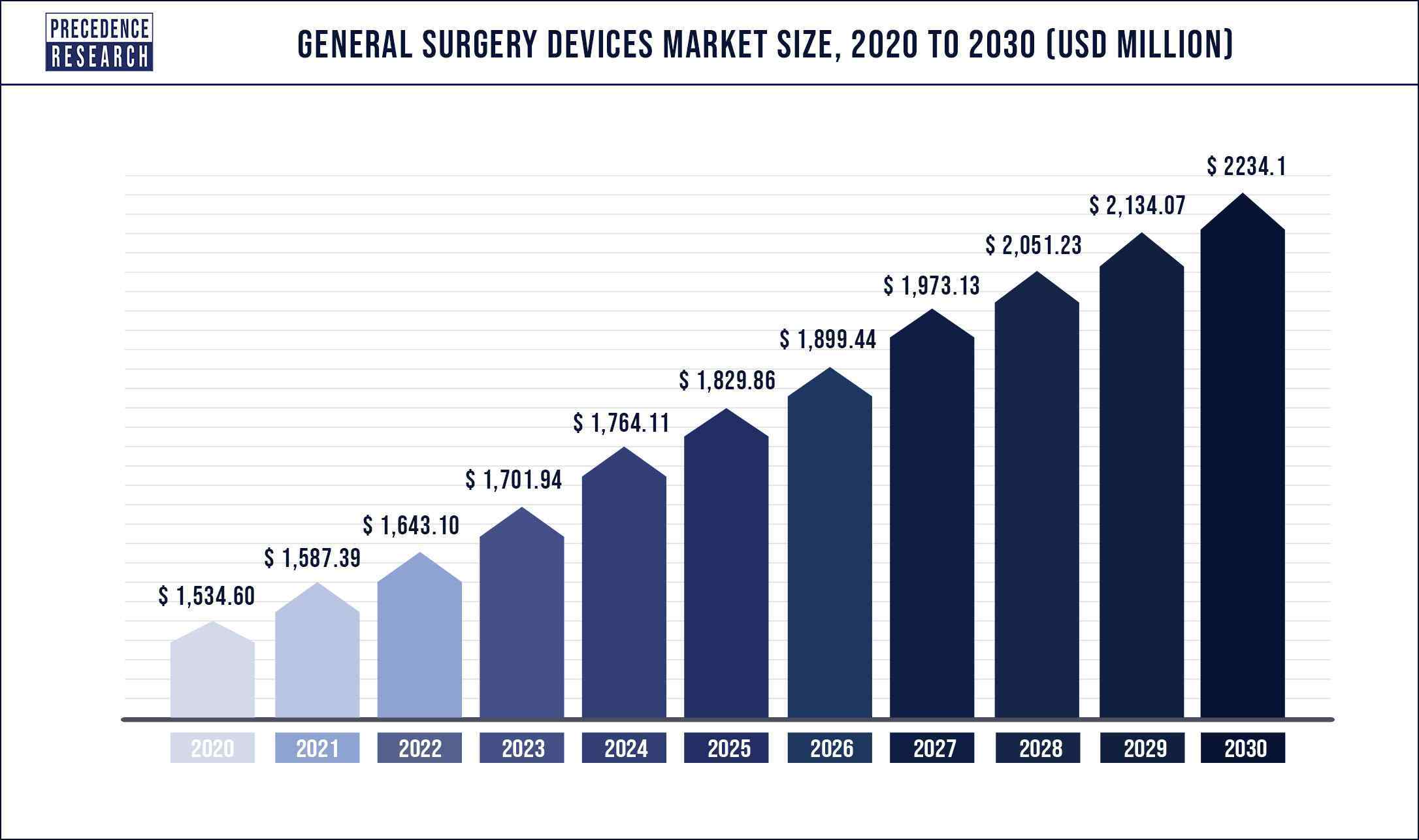 A basic surgical procedure requires a profusion of surgical devices. For instance, a childbirth require surgical lamp, surgical devices, gloves, masks, syringes, and various other devices. In a complex surgery such as neurosurgery, organ transplant, and cardio surgery requires a lot more devices. This is a major reason for the high consumption of general surgery devices. Thereby, propelling the sales revenue of the general surgery devices market across the globe.

The latest trends and technologies are expected to fuel the market in the upcoming years. Development of robotics surgery offers high-precision surgery and its continuous development will lead to achieve robotics surgery at lower cost. Moreover, the robotics surgery is estimated to witness developments in the neurosurgery and orthopedic procedures. Furthermore, nanotechnology and smart surgery devices will lead to open significant growth opportunities to the prominent market players in the general surgery devices industry. According to WHO (World Health Organization), the surgery and medical devices industry is highly fragmented and around 80% of the industry is made up of medium and small-sized enterprises. They deal in light medical devices and equipment as heavy medical devices involves a lot of costs. Furthermore, there is lack of well-defined supply chain. Hence the introduction of RFID and blockchain technology is expected to help in device tracking in real time and improve supply chain operations.

The major factors influencing the global general surgery devices market includes rising geriatric population, introduction of RFID technology, introduction of blockchain technology, rising demand from the emerging economies, growing awareness regarding surgical facilities, and growing burden of diseases to cite a few. The popularity of portable surgery devices is increasing. The rising prevalence of chronic diseases among the population. The cost of treatment in hospitals is costlier. Therefore, people are increasingly adopting the use of portable surgery devices and prefers to get the treatment at home. This factor is boosting the market growth in developed markets. However, the high cost of surgery devices is a key restraining factor. The heavy investments due to the technological advancements in the surgery devices have resulted in the high prices of the surgical devices. The acquisition cost of advanced surgery devices is very much high and further, its maintenance cost is also high. This hinders the growth of the market especially in the developing and underdeveloped markets.

By type, disposable supplies segment led the global general surgery devices market with remarkable revenue share in 2020. This is attributed to the high demand for the disposable devices such as catheters, needles, and syringes. Moreover, government regulations regarding proper disposal of such devices is propelling the segment growth. 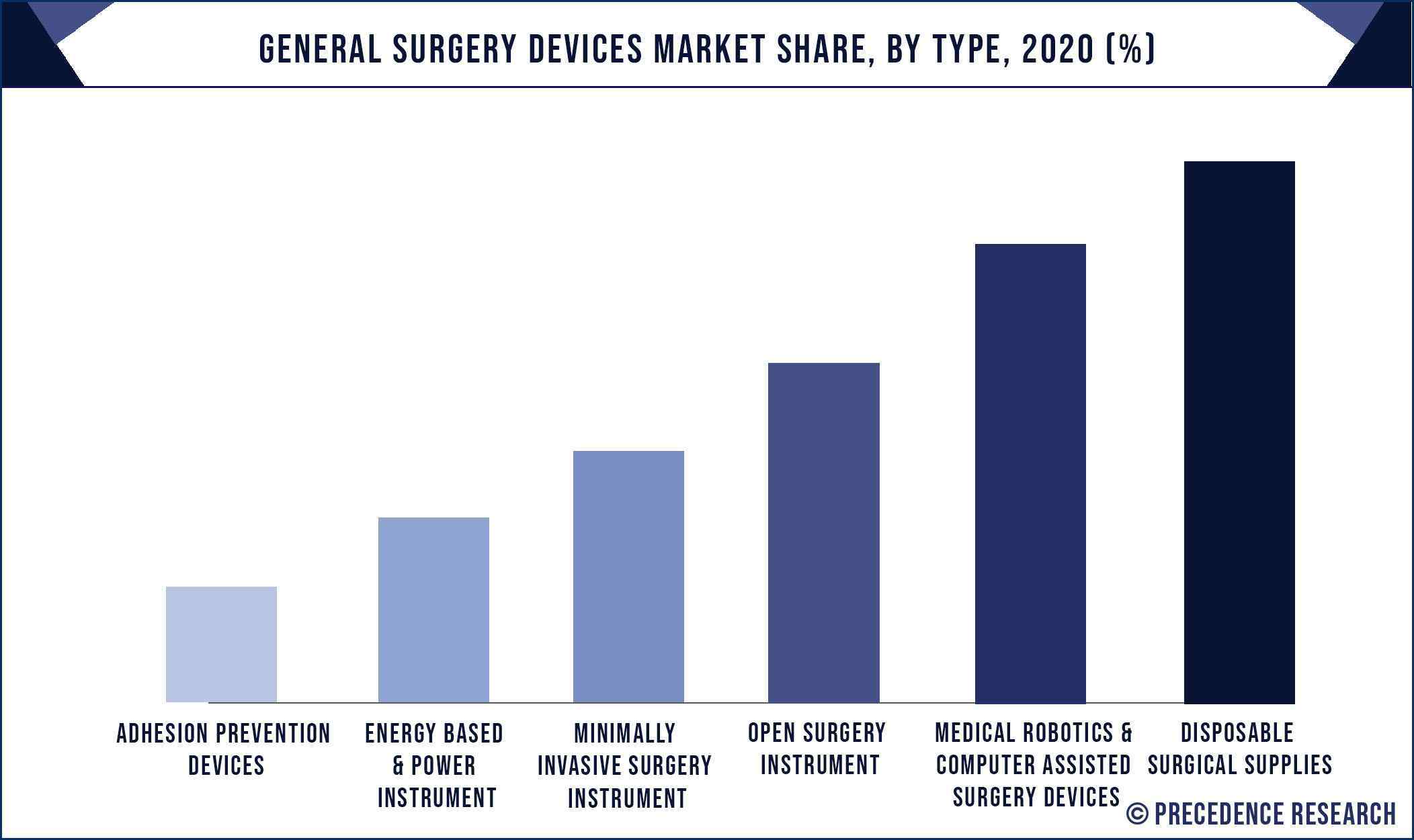 Medical robotics and computer assisted general surgery devices segment is estimated to be the most opportunistic segment during the forecast period. This is attributed to the extensive investments on research & development and adoption of robotics in surgery, especially in minimally invasive surgeries.

By application, the orthopedic surgery segment held the major revenue share in the global general surgery devices market in 2020 owing to the rising bone disease among the geriatric population. Furthermore, the growing usage of smart and AI guided devices and robotics in the orthopedic surgery is exponentially contributing towards the segment growth.

On the other hand, wound care is projected to show fastest growth due to the rising number of road accident cases. The growing penetration of healthcare units across the globe is positively contributing towards the growth of this segment.

North America dominated the global general surgery devices market in 2020, in terms of revenue and is expected to remain dominant throughout the forecast period. The population of North America is growing older. According to the World Bank, around 65% of the population in U.S. was above 30 years of age in 2020. Further, the increased income coupled with increased awareness regarding various surgical approaches is fostering the market growth in North America. U.S. is the leading market in North America due to better government regulation regarding the surgical devices and improved penetration of surgical centers. 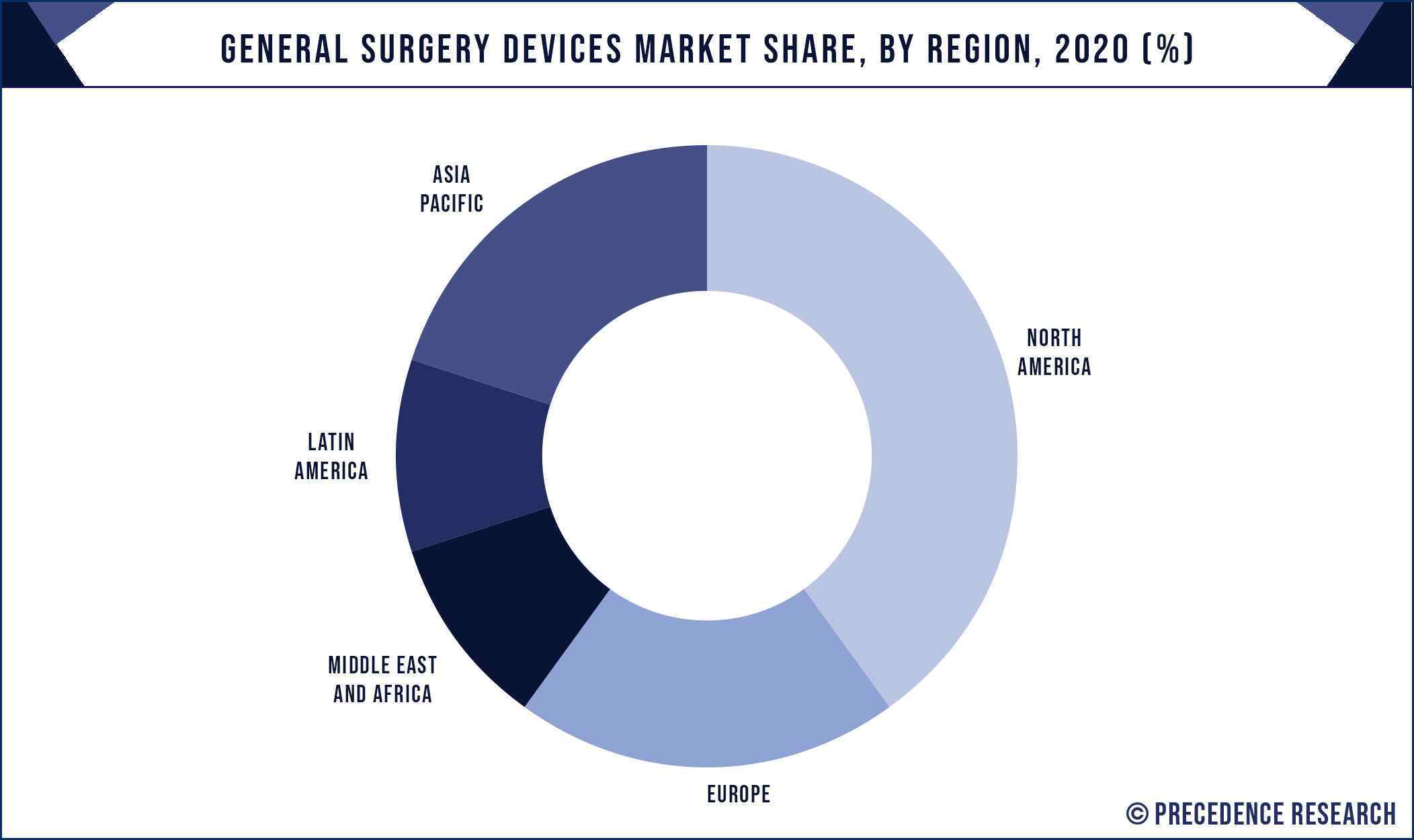 Asia Pacific is estimated to be the most opportunistic market during the forecast period. This is attributable to increased awareness, increasing penetration of healthcare and surgical facilities, heavy investments on research & development, and rising medical tourism industry in the region. The markets like China and India is expected to witness significant growth rates in the forthcoming years owing to its huge population and rapid urbanization.

The market is moderately fragmented with the presence of several local companies. These market players are striving to gain higher market share by adopting strategies, such as investments, partnerships, and acquisitions & mergers. Companies are also spending on the development of improved and efficient surgery solutions. Moreover, they are also focusing on maintaining competitive pricing.

Some of the prominent players in the general surgery devices market include: