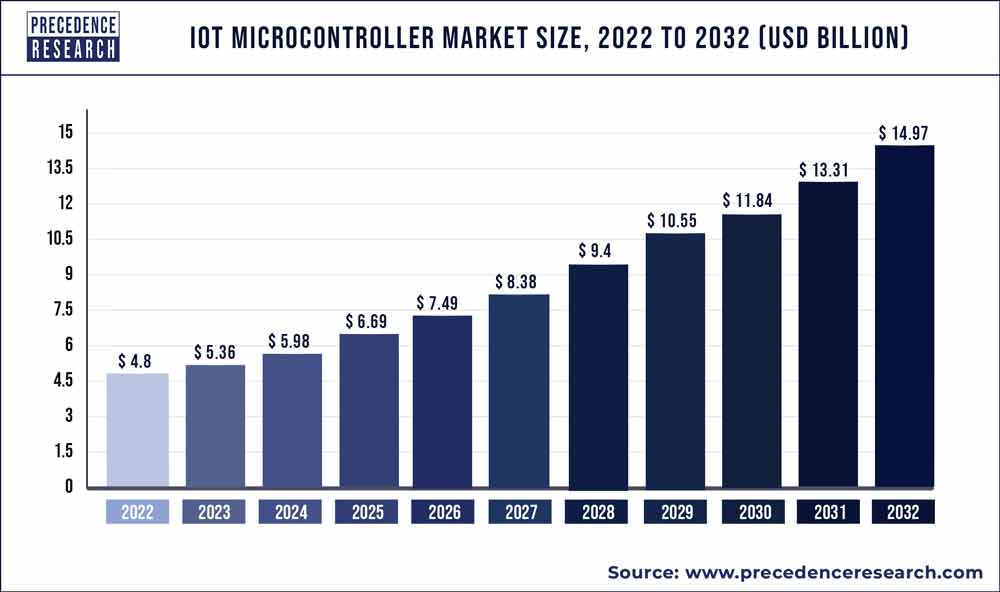 A microcontroller is a small integrated circuit that controls a single process in an embedded system. A typical microcontroller is a single chip that houses a CPU, memory, and input/output (I/O) peripherals. Due to advances in communication, microelectronics, and information technology, the idea of the Internet of Things (IoT) has been widely applied in a variety of industries, including smart cities, smart homes, consumer electronics, automation and so forth. The Internet of Things (IoT) and smart devices frequently employ microcontrollers (MCUs) to supply computational power. These are essentially mini computers that give smart devices access to memory, processing power, and peripherals for input and output.

Microcontrollers are designed to carry out certain functions and are used in a variety of applications, such as wearable technology, industrial gear, warehouse inventories, home appliances, and more. As a result of IoT's extensive uses in the digitally connected world, microcontroller integration with IoT has become increasingly popular. Some of the key reasons driving the market expansion are the rising number of IoT connections between the consumer and business sectors and the demand for connected items with high performance, low power consumption, and low energy consumption.

Growing Internet of Things (IoT) technological breakthroughs, a sharp increase in the number of connected devices, and a more interconnected infrastructure are some of the factors boosting market demand. The business is also getting a boost from the rising number of autonomous and electric vehicles that utilize linked infrastructure. The Internet of Things refers to the networking of several devices. IoT is used by self-driving cars, for instance, to update their algorithms depending on input from users. A few other key factors driving the industry's expansion are rising digitization, an increase in smartphone shipments, and the development of 5G technology.

The coronavirus epidemic has changed both how the semiconductor business operates and how society as a whole function. Business operations on the microcontrollers market have slowed down as a result of a severe chip scarcity. To create stable revenue streams despite the ongoing epidemic, manufacturers are concentrating on sectors with high growth potential like consumer electronics, healthcare, and IT.

According to product type, the 32 Bit MCU segment is in the lead and is anticipated to contribute most to the IoT microcontroller market. 32bit MCUs are the most adaptable for use in Internet of Things applications. It processes multiple peripherals efficiently, is widely used in industrial applications including factory automation and building automation, and is also competitively priced. Because they can execute arithmetic operations on 32-bit values, 32-bit microcontrollers perform operations faster than other microcontrollers. They can complete operations in less instruction cycles thanks to its wider data bus. As a result of the increased need for IoT everywhere, businesses have started releasing 32-bit microcontrollers constantly. 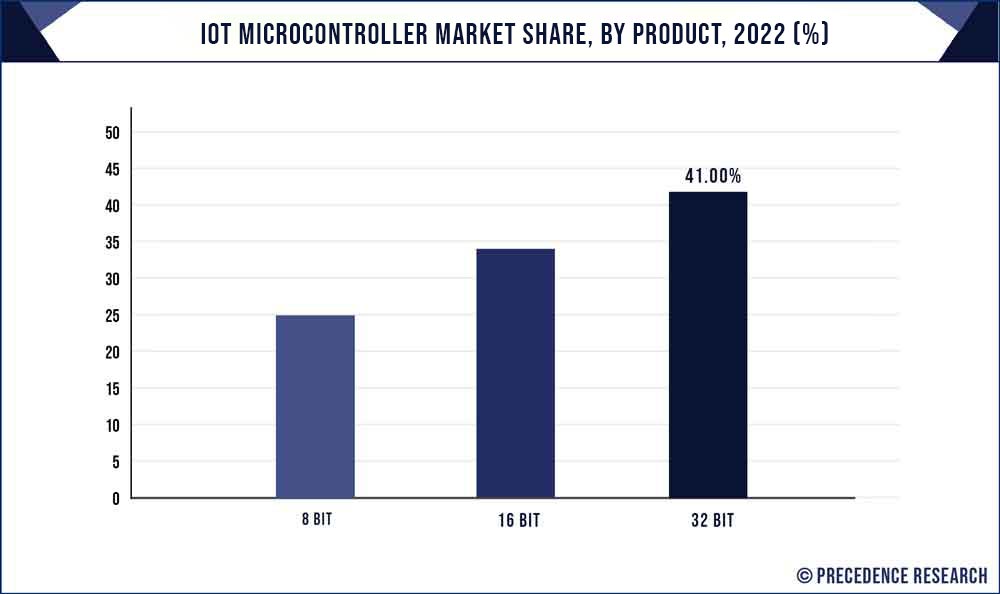 Over the projection period, it is anticipated that the 8 Bit MCUs market would grow significantly. For low-power applications like connected devices and smart wearables, the 8-bit segment is widely employed. The adoption of wearables is anticipated to be fueled by the millennial generation's increased demand for fitness wearables. Obesity and other lifestyle diseases encourage people to engage in various fitness-related activities and track their progress using wearables, which is projected to be positive for the market's growth over the coming years.

During the projected period, the smart homes segment is anticipated to be the largest in the IoT microcontroller market. Home appliances are included in the smart home category. A trend that is anticipated to support the market growth for the smart home segment over the coming years is the increase in demand for safe, secure, and energy-efficient applications like HVAC and energy management, lighting, and infotainment. This is especially true of app-controlled smart devices, particularly mobile apps.

Consumer electronics segment is expected to grow significantly. Smartphones, wearable technology, and other items fall under the consumer electronics category. The staff were forced to work remotely due to the COVID-19 outbreak. This has increased the demand for smart devices like fitness trackers and smartwatches. Wearables sales are anticipated to increase over the next few years due to millennials' rising fitness and health consciousness. IoT MCU sales are therefore anticipated to be driven by the use of low-power MCUs along with short-range wireless communication, particularly 8 bit combined with Bluetooth/KNX/Zigbee/Wi-Fi-based protocols, over the forecast period.

During the forecast period, Asia-Pacific is expected to maintain its dominant position. The key driving forces behind the expansion are China, India, and Japan, which collectively accounted for more than 50% of the market share. Rising demand for smart wearables and favorable government investment to assist initiatives for smart cities can be credited with this. The recent Regional Comprehensive Economic Partnership (RCEP) trade agreement between China and ASEAN nations, as well as the surge in disposable income in growing economies like Vietnam, Malaysia, and Indonesia, should allow consumers to buy smart home gadgets at competitive costs. Ultimately, this will fuel market expansion over the projection period.

Europe is considered as second largest region in the IoT microcontroller market. This region includes UK, Germany, and France. As part of ambitious expenditures in grid modernization, more than 50% of the electricity meters in Europe have been replaced by smart meters. The installation of smart meters in European nations like France, Spain, and the U.K. has been especially accelerated by favorable government investments, which supports the market expansion over the forecast period. All of these elements should create chances for market participants to increase profitability, which is positive for the market growth of IoT microcontrollers throughout the forecast period.