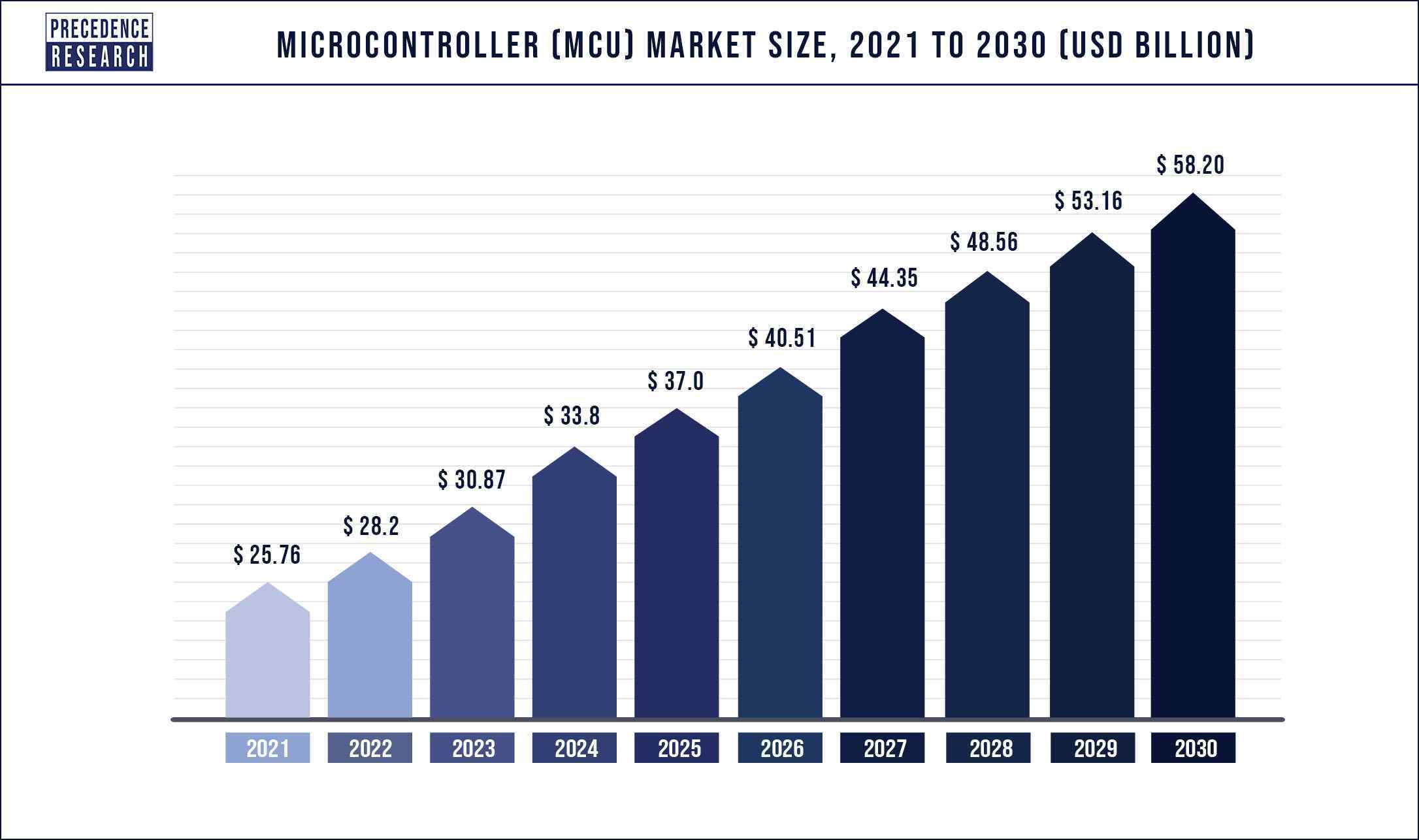 The prominent growth in consumer electronics, automotive, and healthcare industries attributed to the rising demand for Microcontrollers Units (MCUs). MCU are majorly used in devices that require high degree of control utilized by the users. The automotive industry seeks an escalating demand of luxury cars that uses advanced microcontrollers to control various advanced features incorporated in the car, thereby propelling the industry growth of automotive sector in the market. Furthermore, a spike in the sales of electric vehicles (EVs) especially in the developed regions expected to boost the growth of microcontrollers in the coming years. The growth of EV is also supported by the governments of various regions, as it remarkably helps in reducing the carbon footprint.

Recently, the MCU market witnesses an increased demand for Internet of Things (IoT) MCUs owing to spreading web of connected devices encompasses televisions, smartphones, home appliances, tablets, smart meters, gaming consoles, and security systems. By leveraging this ever-growing web of devices, the demand for IoT microcontroller units expected to propel. Increasing competition among the market players has notably reduced the price of microcontrollers that anticipated to further fuel its demand in the coming years. The reducing average selling prices coupled with high demand of MCUs from major application areas also boost the growth of the market.

The 32-bit segment accounted largest revenue share of around 41% in 2021. The 8-bit microcontroller technology lowers the material costs and simplifies the product design. The developers select the controllers on the basis of their processing capability, power consumption, and degree of interfacing required. An 8-bit MCU comprises of software simplicity, low gate count, and lesser complexity that decrease its cost compared to other types of microcontrollers. On the other side, the 8-bit MCU predicted to witness slower growth due to its processing speed that generally runs at 8 MHz and does not have considerable internal Random-Access Memory (RAM). 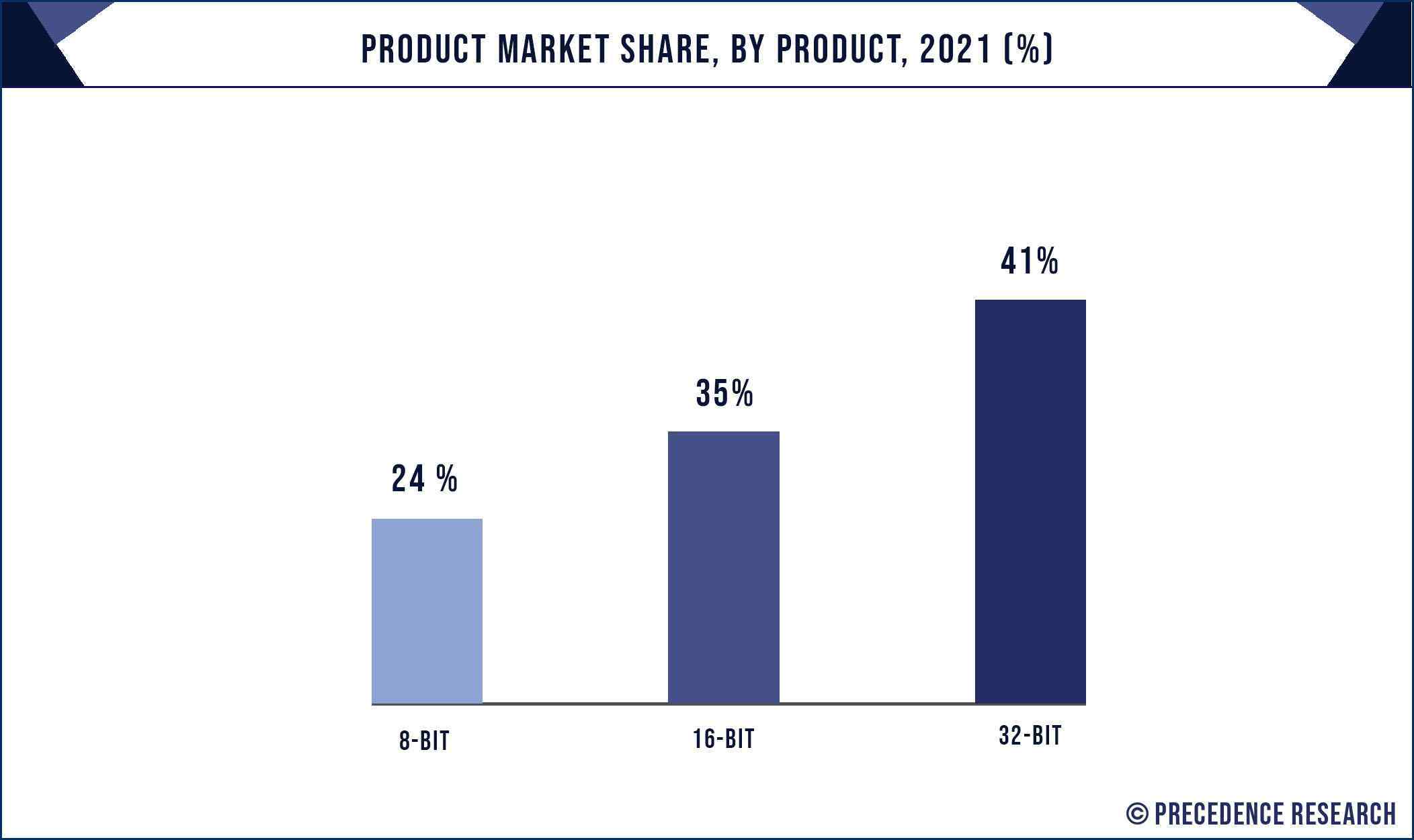 16-bit and 32-bit MCUs are used on larger scale in the automotive industry owing to their specific technological requirements.  However, the 32-bit MCU segment anticipated to register the highest growth rate during the forecast period. 32-bit MCUs have higher processing power compared to their counterparts and consume less amount of power. Furthermore, increasing popularity of 32-bit MCUs because of significant decline in the per unit price expected to further propel the growth of the segment.

On the basis of application, the global microcontroller market is bifurcated into consumer electronics, automotive, medical devices, industrial, and military & defense. The automotive sector is expected to witness growth 10.1% over the forecast period. Introduction to Advanced Driver Assistance System (ADAS) and Adaptive Cruise Control (ACC) accounted to drive the automotive segment prominently over the analysis period. ADAS technology applies image sensors to improve the driver safety by offering features that include parking assistance, lane departure warning, and collision avoidance systems. The stringent regulatory norms for improving the road safety for pedestrians and drivers predicted to further propel the growth of the segment. 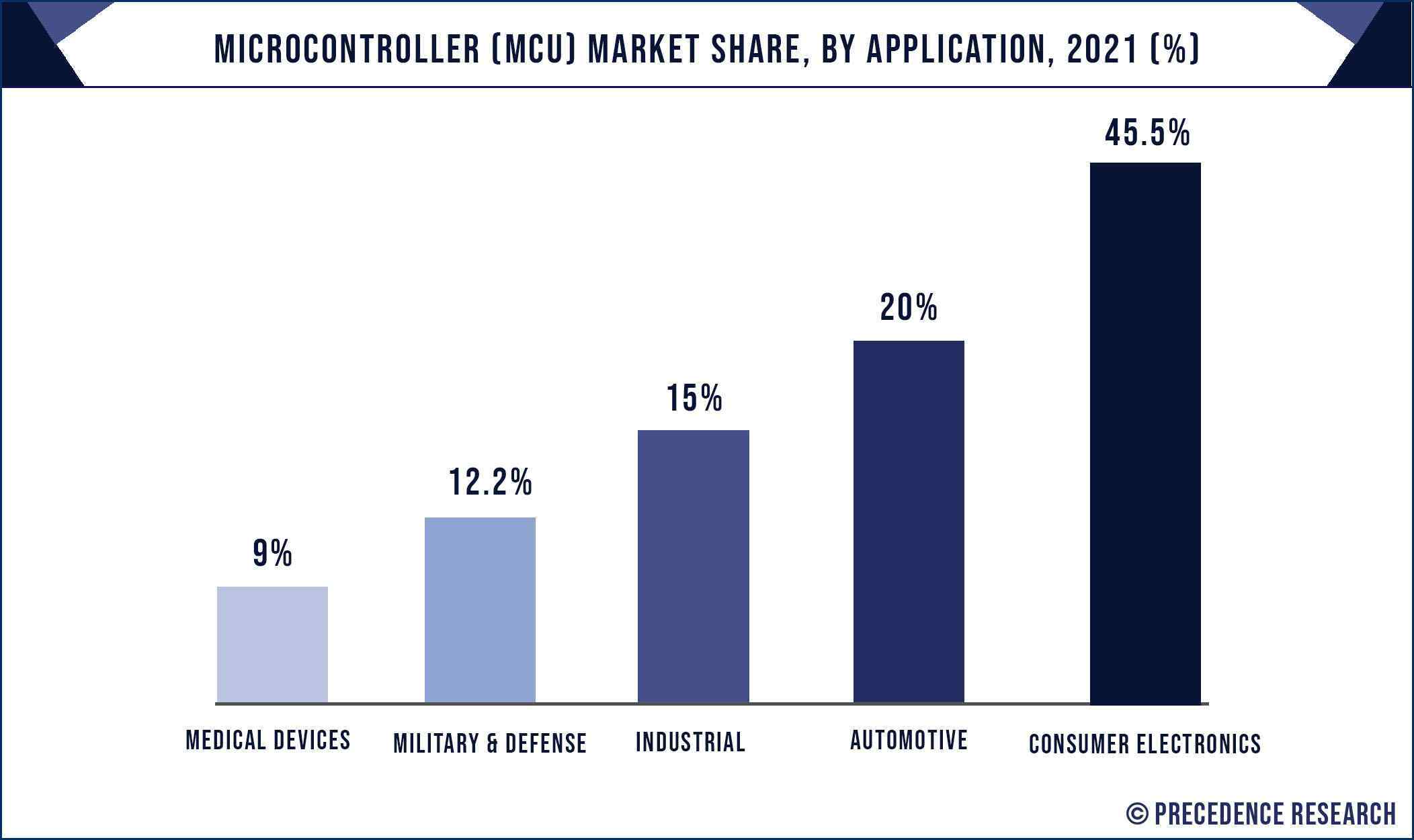 North America encountered the largest market share, accounting to more than 41% of the overall market value in the year 2021. Rising penetration of Internet of Things (IoT) ecosystems in corporate places and homes in the region that has led to significant rise in the demand for smart wearables, smart electricity gadgets, medical devices, sensors, and other IoT enabled devices that projected to propel the market growth in the region over the forecast period. 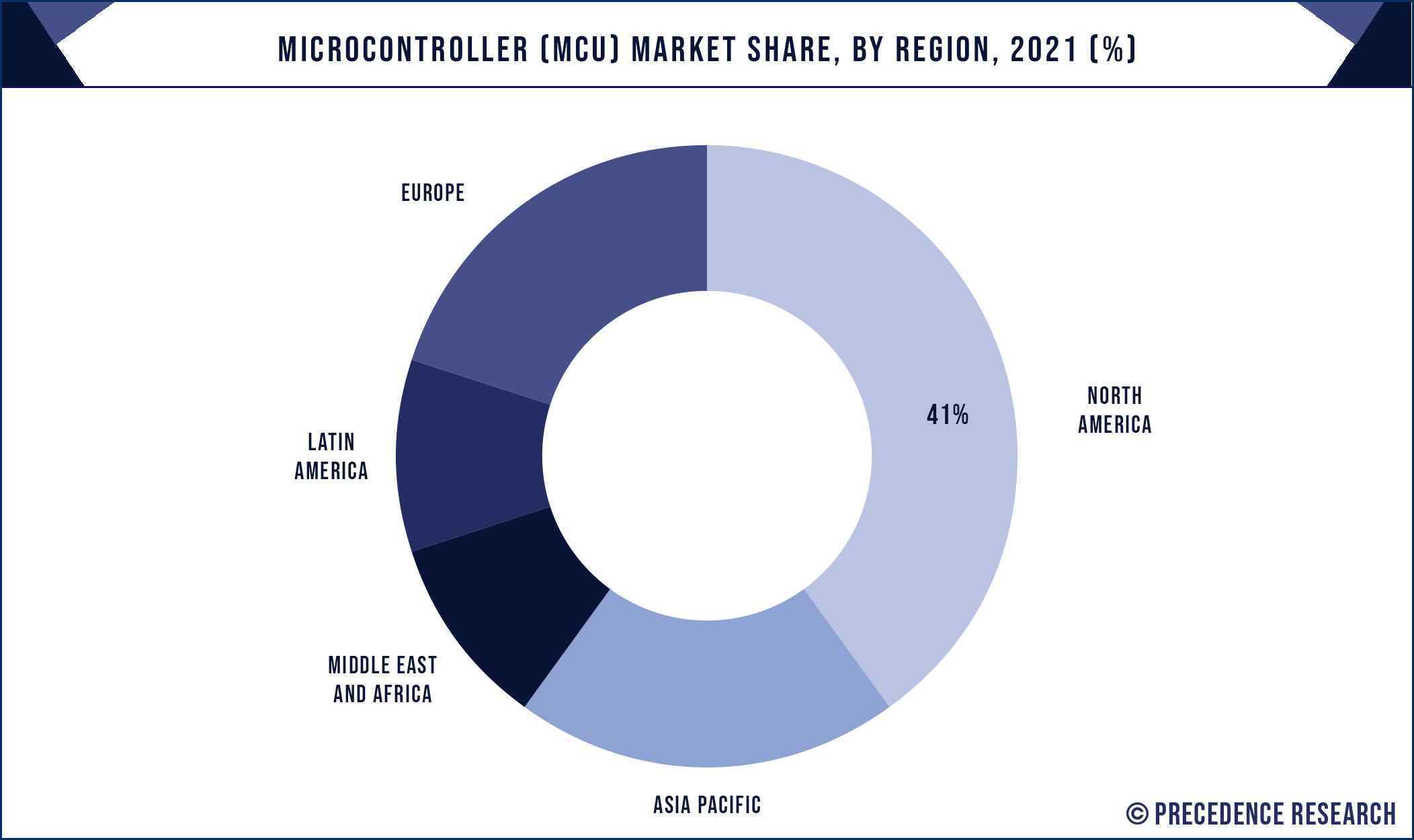 Europe is the other most prominent revenue contributor to the global microcontroller market because of significant presence of automotive and its parts manufacturers. Furthermore, significant demand of luxury cars along with the presence of manufacturing plants of leading automobile players in the region drives the demand for MCUs in the region.

The global microcontroller (MCU) market observes intense competition among market players. Leading five market players occupied nearly half of the market value that drives the market towards consolidation. Brand name and loyalty are the key factors behind the remarkable success of these players in the global market. Other than this, market participants actively focus towards partnership and collaboration to develop new and advanced products.

Some of the prominent players in the microcontroller (MCU) market include:

This research study comprises complete assessment of the market by means of far-reaching qualitative and quantitative perceptions, and predictions regarding the market. This report delivers classification of marketplace into impending and niche sectors. Further, this research study calculates market size and its development drift at global, regional, and country from 2017 to 2030. This report contains market breakdown and its revenue estimation by classifying it on the basis ofproduct, application, and region:

What is the current size of the global microcontroller market?
Precedence Research Says, the global microcontroller market size is expected to reach over USD 58.20 Billion by 2030.
What is the CAGR of microcontroller market?
The global microcontroller market is projected to grow at a compound annual growth rate (CAGR) 9.48% during the forecast period 2022 to 2030.
Which factors driving the microcontroller market?
Factors such as rapid innovations and developments in the automotive sector due to increasing adoption of internet of things (IoT) are responsible for the recent developments in the industry. In addition rise in trend of automation in equipment and machinery partsspur the scope of electronic products along with technology upgradation that prominently propels the demand for the development of new solutions and products.
Which region encountered the largest market share?
In 2019, North America encountered the largest market share, accounting to more than 35% of the overall market value due to rising penetration of IoT ecosystems in corporate places and homes
Why Asia Pacific exhibits the fastest growth in the microcontroller market?
The Asia Pacific exhibits the fastest growth over the analysis period owing to presence of significant consumer base for consumer electronic devices and automotive applications
Which segment accounted for the largest microcontroller market share?
The 32-bit MCU segment anticipated to register the highest growth rate during the forecast period owing to their higher processing power compared to their counterparts as well as it consumes less amount of power.
Which are the top companies contributing in microcontroller market?
Some of the key players operating in the market are Fujitsu Semiconductor Limited, Cypress Semiconductor Corporation, Infineon Technologies AG, NXP Semiconductors, Microchip Technology Inc., Renesas Electronics Corporation, TE Connectivity Ltd., STMicroelectronics, Texas Instruments Incorporated, Yamaichi Electronics Co., Ltd., Toshiba Electronic Devices & Storage Corporation, and Zilog, Inc. among others.
Which application segment projected to exhibit the fastest growth over the forecast period?
Consumer electronics application segment projected to exhibit the fastest growth over the forecast period attributed to the miniaturization of consumer electronic devices.