The microarray market size was estimated at USD 3.72 billion in 2020 and expected to surpass USD 8.15 billion by 2030, expanding at a CAGR of 8.2% from 2021 to 2030. Growing incidence of cancer worldwide and developments in bioinformatics are main factors driving the microarray market. 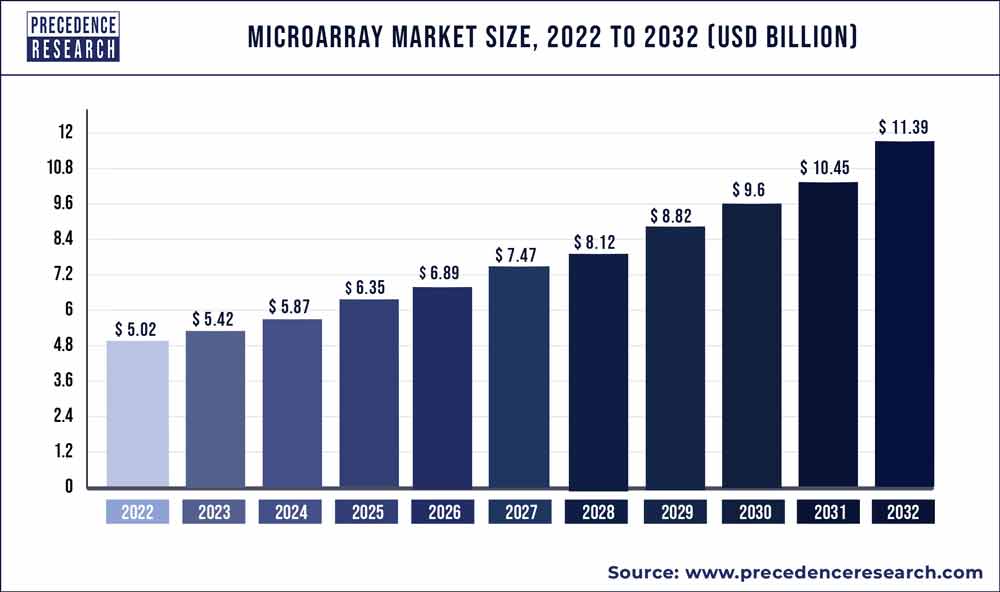 Major Trends in The Microarray Industry:

Microarrays have transformed the approach to gene expression profiling. Related to prior approaches, microarrays have vividly high throughput and are lesser cumbersome. Microarrays are established as a practice for large-scale DNA sequencing and mapping. However, altering the backing surface from a permeable membrane to a dense surface afforded substantial improvements by growing reaction kinetics and dropping background noise. The expertise for microarrays is incessantly evolving. The commonly used arrays are separated into two main categories that comprise oligonucleotide and complementary or spotted DNA (cDNA) microarrays. The commercial oligonucleotide staging has gained acceptance over spotted cDNA microarrays as prices have fallen to the stage where commercial microarrays are the more used platform. DNA microarrays deliver a quantitative and panoramic overview of a sample's appearance output. The power is vast as biological developments generally result from the synchronized interaction of numerous genes.

Microarray technology is principally used in genome sequencing and mapping applications. Nevertheless, in the past decade, this technology is extensively being used in the judgment of genetic and infectious ailments, pharmacogenomics research, forensic applications, drug discovery, cancer diagnostics, and agriculture. Furthermore, the microarray technology is also employed in immunology study such as the researchon the relation between gene expression and phenotype, variation and activation of immune cells, parameter of immune responses, immunological pharmacology, and examination of the molecular mechanisms of allergy. In the current field of genomics, conventional gene-by-gene approach is not satisfactory to meet the demand of handling information produced from mapping the compound biology of the human genome. Thus, there is a need to surge the global interpretation of examining the magnitude of info with microarrays.

In a new press statement, bluebird bio, agene therapy developer, broadcasted that COVID-19 had deferred the EU unveiling and U.S. filing of gene therapy applicant Zynteglo (LentiGlobin). The establishment now assumes to dosage the primary commercial patient in the 2nd half of 2020 with Zynteglo in Germany. Previously, the corporation had declared the 1st of the year as the unveiling date. Numerous gene therapy makers are re-shifting their attention to develop new vaccines for COVID-19. The reviewed short-term emphasis across these recognized developers is likely to contribute significantly to the effect the market.

The microarray technologies encompass a high multiplexing capability and are extensively used for sensing diverse β-lactamase genes existing in a sole strain. This ability can help clinicians in guiding antimicrobial treatment. Microarray technology is demonstrating to be one of the main developments in the recent past that have driven biological research into post-genomic era.

Consumables segment displayed the major share in the worldwide microarray market in 2019. Repeated use and bulk purchase are the key reason for highest market stake of consumables. The factors such as launch of new products are expected to retain the dominance of consumables in the near future.

The software & services are anticipated grow at the maximum CAGR through the forecast time-frame mainly due to integration of software’s into systems.

DNA microarrays have multiple applications in area of gene expression investigation, genotyping, and transcription factor binding investigation amid others.Oral medicines are generally the first line of treatment that a physician prescribes.

Factors such as rise in the use of microarrays in drug discovery and research applications. contribute to the growth of cancer segment.

North America is Estimated to be the Largest Market for Microarray

The detailed research report covers significant prospects and inclinations of microarray products throughout different regions including Europe, North America, Asia-Pacific, Africa, Middle East, and Latin America. By region, microarray market is led by North America due to heavy expenditure in microarray research and development and existence of skilled scientists. Europe reported the second maximum share predominantly due to presence of key manufacturers. On the contrary, Asia-Pacific is anticipated to witness the rapid growth rate, on account of increasing investment by major manufacturers, high prevalence of cancer, and growing per-capita healthcare expenditure. 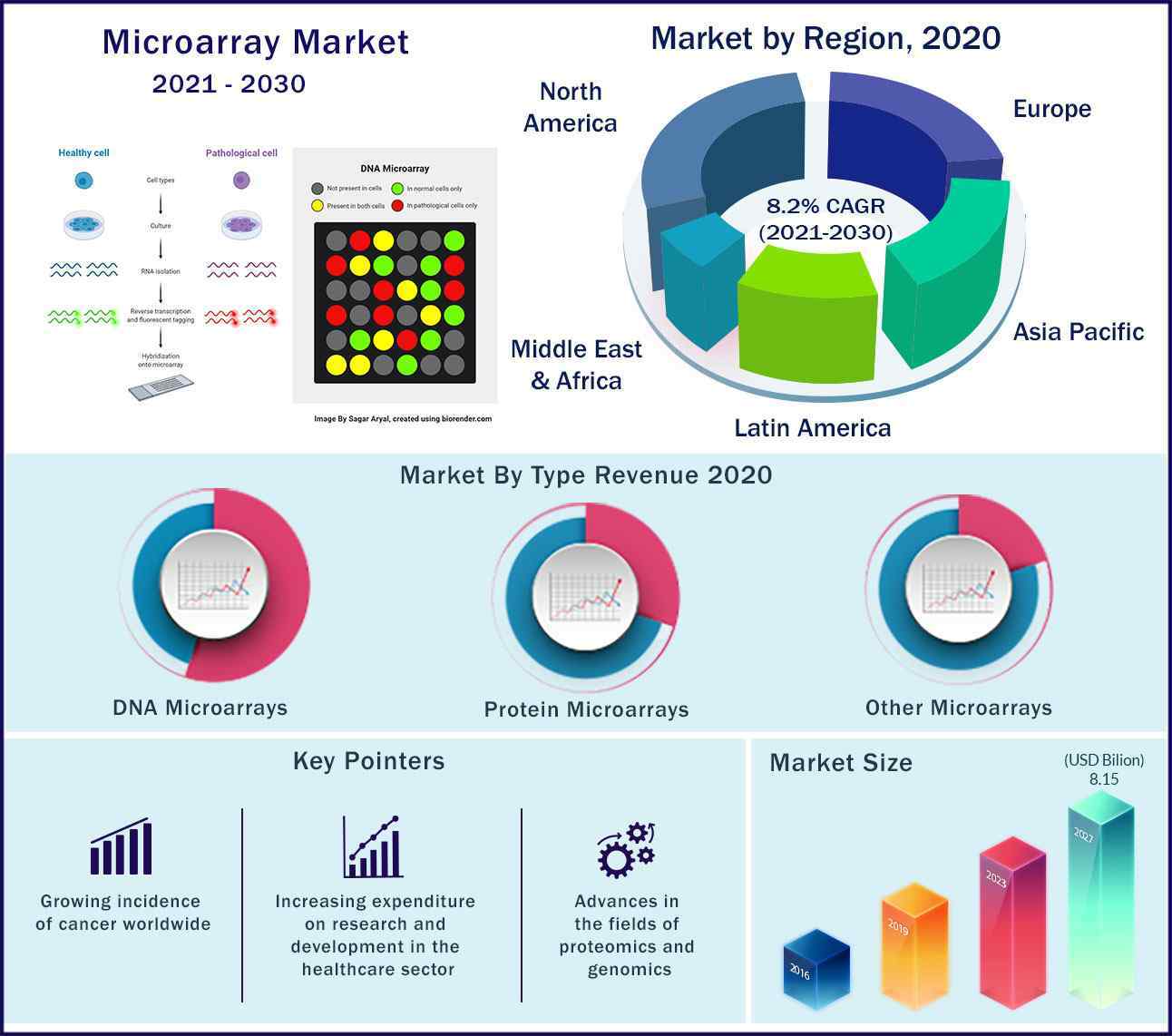 In order to well recognize the present status of enzyme-linked immunosorbent assay (ELISA), and policies implemented by the foremost nations, Precedence Research projected the future progress of the microarray market. This research report bids quantitative and qualitative insights on microarray market and valuation of market size and progress trend for probable market segments.

What is the current size of the global microarray market?
According to Precedence Research, the microarray market size was valued at USD 3.72 billion in 2020 and expected to surpass USD 8.15 billion by 2030.
What is the CAGR of microarray market from forecast period 2021 to 2030?
The microarray market is anticipated to grow at a compound annual growth rate of 8.2% from forecast period 2021 to 2030.
What are the factors driving the microarrays market growth?
Factors such as growing incidence of cancer worldwide, increasing expenditure on research and development in the healthcare sector, growing number of applications of microarrays, advances in the fields of proteomics and genomics, developments in bioinformatics, evolution of software’s, growing awareness regarding personalized medicines, and increasing preference for DNA based microarrays are driving the growth of microarray market.
How much was the market share of North American region in the microarrays market?
In 2020, the North American region dominated the worldwide market with a market share of higher than 39%.
Which companies are functioning in the worldwide microarray market?
The key companies functioning in the worldwide microarray market are Illumina, Inc., Agilent Technologies, Inc., Thermo Fisher Scientific, Inc., Merck & Co., Inc., PerkinElmer, Inc., Arrayit Corporation, Bio-Rad Laboratories, GE Healthcare, Molecular Devices, LLC, and Affymetrix among others.
Which product segment was dominated the overall microarray market in 2020?
Among the product segment, consumables dominated the overall market in 2020. Recurrence and bulk procurement of consumables for numerous research applications is the foremost factor attributing to its large market share.
Why Asia-Pacific region is anticipated to witness the rapid growth rate in the microarray market from forecast period 2021 to 2030?
The Asia-Pacific is anticipated to witness the rapid growth rate, on account of increasing investment by major manufacturers, high prevalence of cancer, and growing per-capita healthcare expenditure.