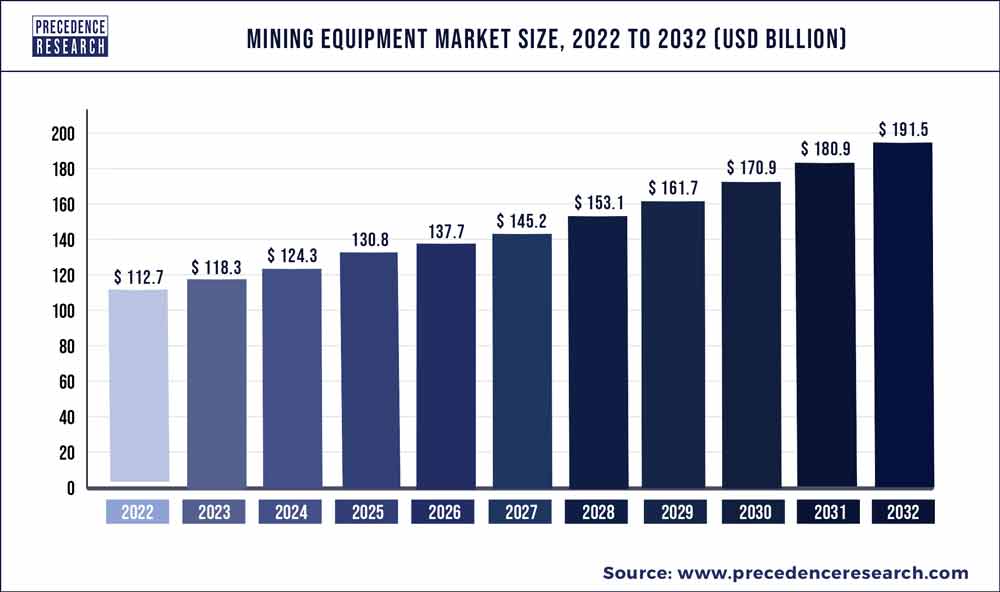 Mining is the process of extracting natural products from earth including coals, metals, and more. And the equipments used in extraction are known as mining equipment. The material is excavated underground using specialized mining equipment like trucks, loaders, diggers, etc., and is often transported to the surface for further processing using skips or lifts.

One of the top priorities in the mining sector is worker safety. To assist ensure worker protection, many industry players are tackling safety issues by automating tasks that were previously completed by people labor. In mines all throughout the world, automation, the use of machines and other control systems to complete jobs that would otherwise be carried out by people, is becoming more and more prevalent. Mines can create final goods of a higher quality because automation provides them more control over their production processes. Most notably, automation has improved worker safety in mining in a variety of ways. Hence, with the use of technology safer environment for workers can be created.

The utilization of natural resources, environmental pollution, and changes in land use like urbanization will all increase with a growing population. The changes in global demographic patterns will directly affect local habitats through resource usage and climate change.

In addition, for the next 20 years, emerging economies like Asia and Africa are expected to account for more than 50% of global urban expansion. One of the major factors driving the market's growth is the increase in industrialization and urbanization around the world. The steady economic progress is also giving customers in the Asia-Pacific region more money to spend, which has eventually increased demand for natural resources.

Moreover, the population has increased significantly during the past few years, which has increased mineral consumption. Rise in population drives the need of such products as these products are used by almost every individual and hence, it is expected that rising population can lead to drive the market. A further factor supporting the boom in mineral demand is an increase in household earnings, which is beneficial for the market's expansion.

CNG/LNG burns cleanly hence, natural gas is a fantastic option for different kinds of heavy and medium-duty vehicles. Businesses with fleets of mining can significantly cut their carbon footprint by switching to renewable natural gas.

On the basis of application, the mineral segment is expected to be the largest market to show a tremendous growth during the forecast period. The demand for minerals and metals is being driven by global industrialization, urbanization, and population expansion. In the coming decades, demand for renewable, clean energy, and even some conventional energy is predicted to rise dramatically, putting even more attention on supply, security, and environmental effect issues.

Competition for minerals will increase as sustainable energy and electric vehicle technologies receive more attention. Due to demand from developing nations, the coal mining industry is expected to have a substantial market. Improvements in roof control, conveying systems, and other technical developments in coal extraction methods and technology satisfy these objectives.

Due to demand from rising economies, the metal ore mining industries are anticipated to rise steadily. The sector is also impacted by demand in various nations around Asia Pacific due to the region's development.

Depending upon the category, the underground mining machinery segment is the dominant player and is anticipated to have the biggest impact on mining equipment market. Underground mining operations have seen a boost globally as a result of the growth in energy generation. Additionally, because explosions are made underground and no hazardous chemicals are released into the environment, underground mining is less harmful to the environment than surface mining. Moreover, energy consumption has significantly increased in recent years as a result of rapid urbanization and growing industrialization.

Due of technical advancements, contemporary automated excavators and mining trucks are more effective than earlier ones. In the event of a malfunction or operational issue, they promptly convey information to service centers, reducing information flow time and costs.

Surface mining machinery is projected to increase at a significant rate. The supply in contracts with mining enterprises has increased due to the use of automated equipment like dump trucks and the arrival of new technologies in mining.

The highest market share and dominant position in the mining equipment market belongs to Asia-Pacific. During the projection period, Asia Pacific is expected to surpass other regions in terms of market share for mining equipment. Additionally, in order to increase electricity production and to gather minerals and ore for export, governments in these areas are boosting their support for mining. Additionally, growing investments in cutting-edge excavation tools and equipment in nations like Australia and India as well as other developing nations are anticipated to fuel market expansion. Additionally, due to the investment in infrastructure development and the booming power and cement industries, India is predicted to have tremendous growth.

Due to the early adoption of these machines, North America is anticipated to increase significantly. Also, it is projected that the mining industry would expand significantly and sustain stable mining equipment demand. In terms of mining, Europe is also established and industrialized. It is expected to continue to develop as a result. During the anticipated period, the market is anticipated to see an increase in governmental and private sector spending in the field of sustainable development.

Sales of mining equipment made in Germany are expected to reach record levels in predicted years. This might be the outcome of the country's expanding mineral mining industry. Aluminum, kaolin, salt, feldspar, and other commodities are all produced in large quantities throughout the nation. Due to the need to mine raw materials, specialized underground mining equipment including loaders, diggers, and trucks is becoming more and more popular.

In reflecting the company's unified focus on growth in such sectors, Komatsu announced intentions to rebrand its underground hard rock equipment, surface wheel loaders, and new range of blasthole drills. During its renaming, a few goods were added. The Komatsu ZT44 track drill was the first product to be rebranded.