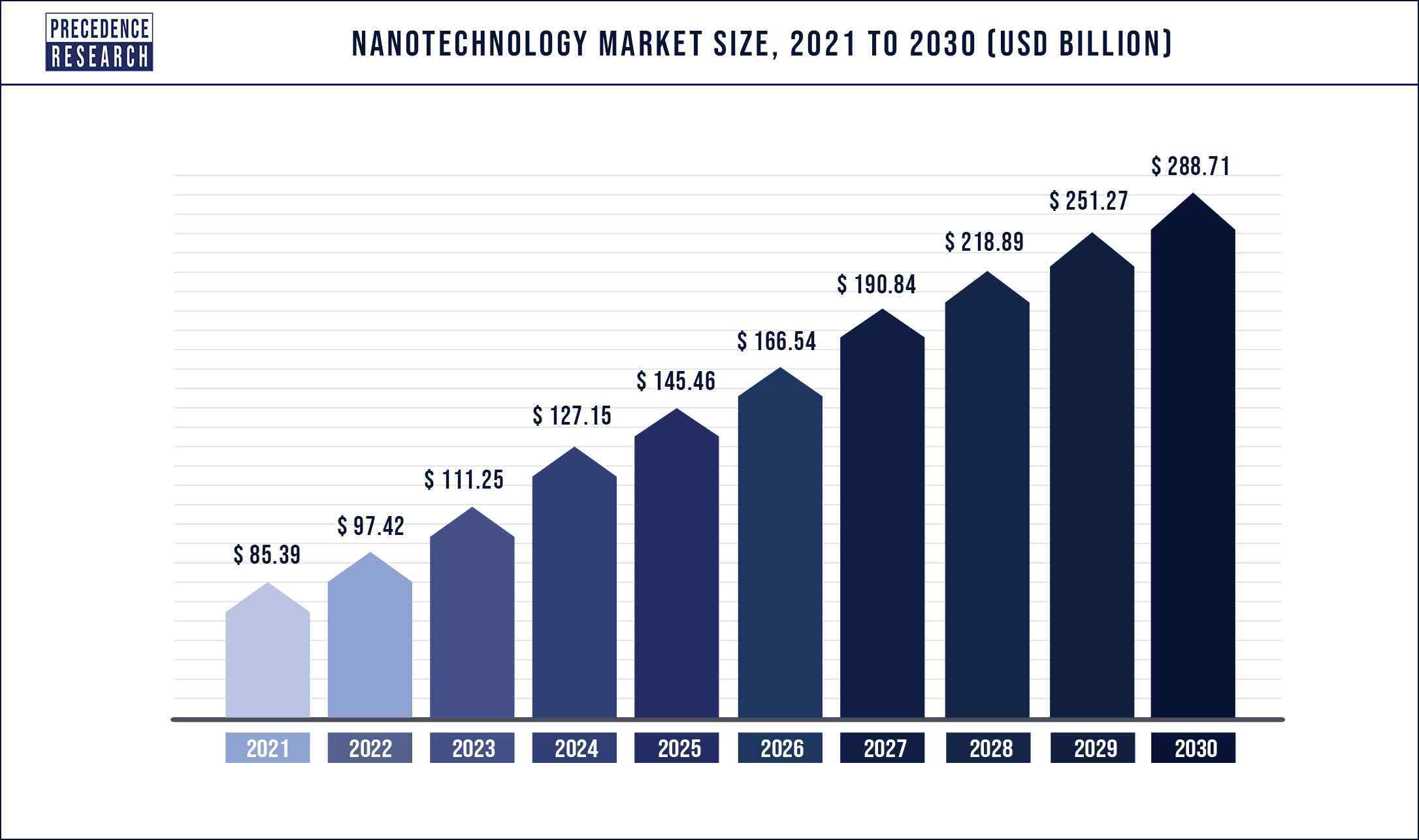 Nanotechnology has gained rapid traction since it came into existence. Nanotechnology includes designing complicated structures from molecular or atomic stage to develop a high quality and high performance products at lower costs. It is a revolutionary and a highly useful technology that is used in all industrial verticals such as pharmaceuticals, transportation, agriculture, communication, manufacturing, and other industries. The growing adoption of nanomaterials in various end use verticals such as aerospace, healthcare, electronics, and textiles industries is expected to drive the growth of the global nanotechnology market during the forecast period. The nanomaterials have gained a rapid traction in the aforementioned industries owing to its special physiochemical properties.

The recent outbreak of COVID-19 pandemic in 2020 had resulted in the increased investments towards research and development activities to develop new potential applications of nanotechnology in the prevention, diagnosis, and treatment of COVID-19 disease.

Furthermore, the nanomaterials are being increasingly adopted in the pharmaceutical and healthcare applications such as imaging applications, medical implants, photo-thermal therapy, and biomedical uses owing to its antimicrobial, anticancer, and antioxidant properties. The demand for the nanomaterials in the electronics industry is significantly rising owing to the growing demand for spintronics, quantum dots, and nanowires in the nano-electronics sector. The growing demand for the high-tech electronic products across the globe is expected to foster the growth of the global nanotechnology market.

Report Scope of the Nanotechnology Market

The nanotubes segment is anticipated to be the fastest growing segment during the forecast period. This growth is attributed to the higher adoption of carbon nanotubes in the production of lithium-ion batteries due to its high reversible capabilities. The carbon nanotubes are also used in the various medical and pharmaceutical applications owing to its big surface area which enables it to conjugate and absorb therapeutic and diagnostic agents such as genes, vaccines, antibodies, drugs, and biosensors. The rising popularity of the minimally invasive surgeries and the rising adoption of the carbon nanotubes in the production of various small equipment and tools is expected to further drive the growth of this segment.

Depending on the application, the medical segment dominated the global nanotechnology market, garnering a revenue share of around 30% in 2021. The increased adoption of nanotechnology in the development of surgical nano-robots, nano-diagnostics, nano-biosensors, cell repair, imaging, and target drug delivery applications are the primary factors behind the growth of this segment. The surging prevalence of various chronic diseases across the globe and increasing adoption of surgical procedures by the patients is expected to drive the demand for nanotechnology for the manufacturing of various surgical tools and equipment in the forthcoming future. Furthermore, the technological advancements in the field of nanotechnology is resulting in the development of various miniaturized surgical equipment, portable monitoring systems, and compact diagnostic devices. These factors are expected to retain the dominant position of the medical segment throughout the forecast period in the global nanotechnology market.

The paints & coatings is anticipated to exhibit the highest growth rate during the forecast period. The nanomaterials are gaining popularity in the coating industry owing to development of advanced techniques that helps in the production of need-specific coatings. Moreover, the nanomaterials enhances the biocide characteristics, hardening, and UV absorption of the coatings & paints. The two prominent nanomaterials used in the production of paints includes silicon dioxide and titanium dioxide. Further, the deodorizing and antimicrobial feature of nano-silver has boosted its adoption in the paints & coatings industry across the globe.

Asia-pacific accounted for a market share of over 35% in 2021 and dominated the global nanotechnology market. Asia-pacific is the home to world's largest population and there is a huge demand for various electronics, medical equipment, textiles, and automotive products that has led to the higher demand for nanomaterials in the manufacturing of these products. Furthermore, the rising government investments in the development of energy and power sector in Asia Pacific region is expected to foster the demand for the nanomaterials in the forthcoming years. The demand for nanomaterials in the countries like China, India, South Korea, and Japan is relatively high owing to the presence of huge manufacturing facilities of various industries. Moreover the rising FDIs due to the favorable industrial policies and availability of cheap labor and other factors of production is expected to boost the manufacturing sector of Asia Pacific region, driving the consumption of nanomaterials in the region. The rising employment level, growing demand for the technologically advanced electronics, and rising investments in the infrastructural projects are the significant drivers of the Asia Pacific nanotechnology market.

The nanotechnology market is highly fragmented with the presence of several top players in the market. These market players are constantly engaged in various developmental strategies such as mergers, joint ventures, business expansion, acquisitions, partnerships, collaborations, and new product launches to strengthen their position and expand their market share.

Some of the prominent players in the global nanotechnology market include: