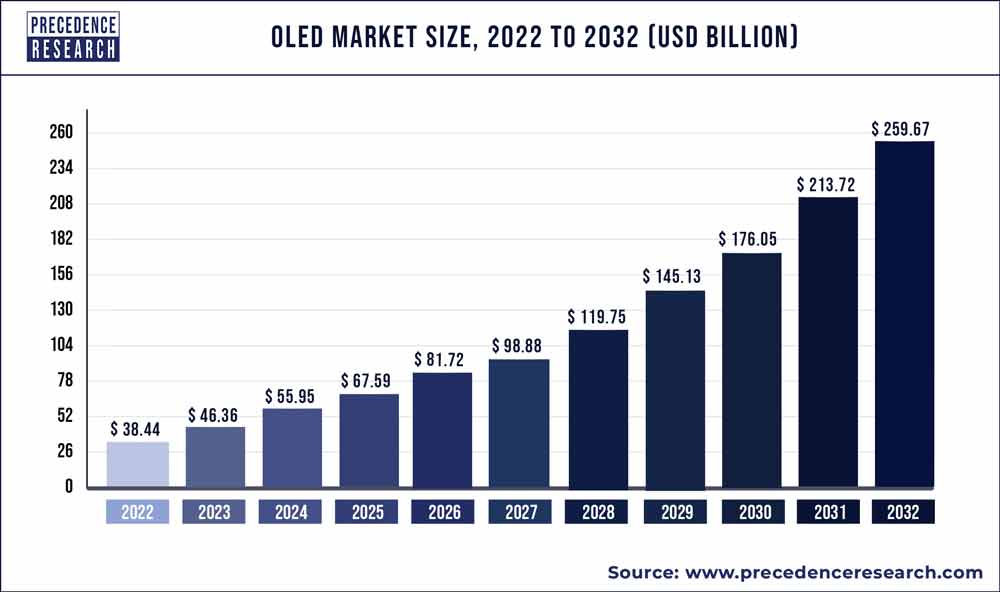 In comparison to conventional LED, VFD, or LCD displays, OLED (Organic Light Emitting Diode) displays offer higher contrast, are brighter, have broader viewing angles, have quicker reaction times, and use less power. OLED displays are self-illuminating due to their biological makeup; therefore, they don't need a backlight for the best visibility under all circumstances. These technologies and products have been developed by several businesses.

OLED technology, which offers effective and beautiful lighting panels, is being used in smart TVs. A digital television that is linked to the internet is known as a smart TV. It functions mostly as a regular television set with built-in internet and interactive Web 2.0 features. Users may browse the internet and see photographs while listening to music and watching movies. For these reasons, smart OLED TVs are changing how entertainment is seen and how the entertainment industry is affected. With increased disposable income brought on by global economic expansion, curved OLED TVs and other high-end items are expected to become more popular.

OLEDs have garnered a great deal of attention from the worldwide scientific and industrial sectors over the years. A wide range of OLEDs have been introduced to the market with uses in many different industries, with a concentration on passive and active-matrix solutions. Additionally, lightweight, unbreakable, bendable electronics with greater mobility have been made using flexible OLEDs. OLED displays, which do not require any of the filtering or backlighting mechanisms present in LCDs, are made from organic light-emitting materials. OLED displays' high brightness, low power requirement, and enhanced contrast are some other benefits.

Over the projected period, expanding OLED display applications are anticipated to fuel market expansion for OLED displays worldwide. OLED-based technology has begun to be used in a number of industries throughout the world. Media players, digital cameras, mobile phones, televisions, wearable electronics, etc. all use OLED technology. A number of well-known market companies, including Sony, Samsung, and LG, have introduced a variety of items featuring OLED displays in an effort to diversify their product lines and achieve a competitive advantage.

Report Scope of the OLED Market

Approximately 15% of the world's total energy consumption is used for lighting. Additionally, around 5% of the world's carbon emissions come from lighting. In order to lower carbon emissions, the United Nations Environment Programme (UNEP) has published some advice on energy-efficient lighting options. With Europe and the Middle East experiencing fast urbanisation and economic expansion, it is anticipated that over the next two decades, the demand for OLED-based lighting would increase significantly. Thus, the need for more LED-based lighting to achieve efficient cost and energy savings is anticipated to propel the worldwide OLED lighting market's expansion in the upcoming years.

Rising Demand for Superior Display in Wearable Devices and Smartphones

As OLED devices are used in a range of end-use scenarios. The increased use of smartphones and the soaring demand for better cellphones are driving the industry's expansion. Smartphones and tablets are using active-matrix OLED (AMOLED) screens more frequently because of their great activation speed. Additionally, they use far less power than LCD, which is why they are recommended for widespread usage in smartphones. The popularity of different wearable gadgets like smartwatches and fitness bands is also boosting the industry's expansion. Increased demand for automated and bright-screen displays is fueling the market's expansion.

Based on product, the display segment dominated the market with highest revenue share in 2021. The lighting segment is expected to grow at a remarkable CAGR during the forecast period 2022 to 2030. And lighting segment held market share of around 18% in 2021. 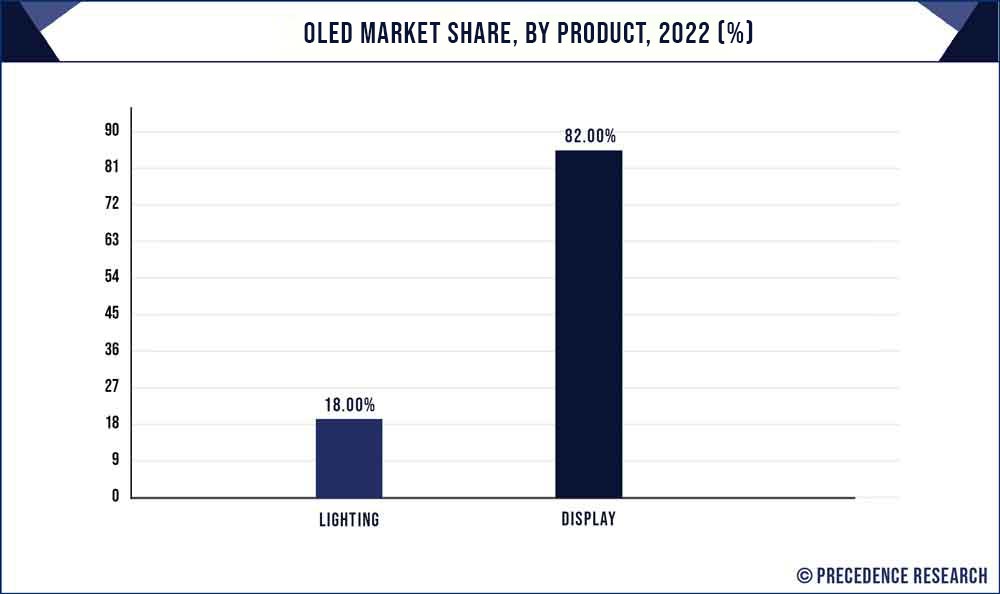 OLED displays and lighting are mostly used in the automotive industry like dashboard displays, heads up display, internal lightings, digital rear-view and internal mirrors, and other external lightings.

It is anticipated that AMOLED displays in smartphones will expand quickly. The OLED screen surpasses the flat panel displays that have generally been used in smartphones since it is emissive and doesn't require any additional illumination. Additionally, mobile manufacturers are increasingly incorporating AMOLED panels into their devices due to better attributes including thinness and brightness, which is anticipated to accelerate market development.

The introduction of foldable devices and the enthusiasm they spark will help the OLED industry grow. OLED lighting research is receiving financial backing from governments all over the globe, there is a large desire for improved viewing experiences, notably among smartphone and television users, and there is a surge in the market for AMOLED displays for usage in AR/VR headset applications.

OLED panels are extensively used in televisions and smartphones. A number of display panel manufacturers also claimed that new product introductions and an improved supply-demand situation for large panels had increased mobile display sales in spite of the pandemic. Therefore, the main product categories promoting consumer sector growth throughout the predicted period will be smartphone, televisions, and wearable technology, notably smartwatches and VR HMDs.

Due to the established infrastructure in nations like Japan, China, and South Korea, the Asia-Pacific region will account for the greatest portion of the worldwide AMOLED display market in 2021. For instance, the Samsung Group, a South Korean multinational company with Asia Pacific headquarters, manufactured in-cell touch screens. In addition, the North American AMOLED Display Market is anticipated to generate sizeable revenue shares because to the growing demand for cutting-edge technology. Additionally, given its demand for non-OLED display solutions, Europe is poised to make a large contribution.