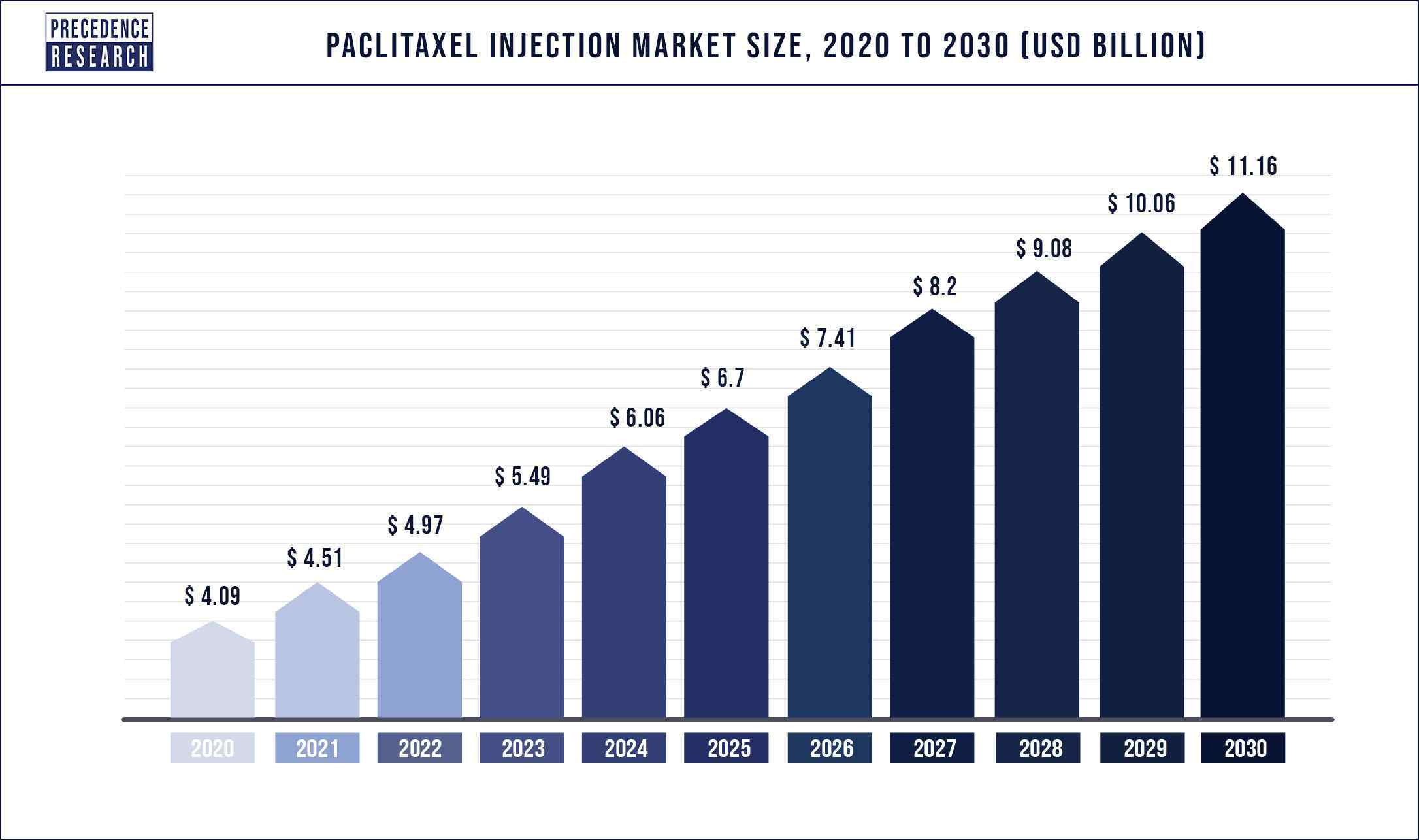 Paclitaxel injection is accessible in a generic form for the treatment of cancer. It has also been included in the essential medicines model list (EML) of WHO. The EML, issued by the World Health Organization (WHO), comprises of the medicines considered to be utmost effective and harmless to meet the maximum important requirements in a health arrangement. The list is regularly used by countries to support develop their particular local lists of crucial medicine. All these features are the major basis for a wide scope and easy accessibility of the paclitaxel injection around the world and in return have augmented the requirement for it as well. This easy accessibility of the paclitaxel injection is one of the key drivers for the paclitaxel injection industry. The upgraded supply chain of the pharmaceutical business internationally, and swift logistics has remained major point of assistance in keeping the demand-supply proportion intact.

Scope of the Paclitaxel Injection Market

The COVID-19 pandemic is having a collateral well being effect on availability of surgical care to millions of patients worldwide. The effect of COVID-19 on operating practice is extensive, ranging from staffing and workforce issues, procedural arrangement, risk of viral transmission intra-operatively, and the fluctuations to perioperative preparation. The affected individuals are being deprived of operating access, with undefined loss of function and hazard of adverse diagnosis as a collateral consequence of the pandemic. Individuals suffering from cancer are understood to be at greater risk of developing severe complications from the SARS CoV2 and simultaneously treatment adjournments can result in poorer oncological consequences. Proper planning is thus important to endure with cancer treatment facilities and concurrently avoiding the danger of contamination to the patients and healthcare staff and not permitting community spread of the viral infection.

The non-small cell lung cancer is anticipated progress at the highest CAGR over the forecast duration mainly due to string product pipeline.

Hospitals are well-equipped with the entire infrastructure that is required to carry out cancer treatments such as chemotherapy. Moreover, hospitals have sufficient funds to stock important drugs for use in multiple patients. These factors contribute to the growth of hospitals within the end user segment. 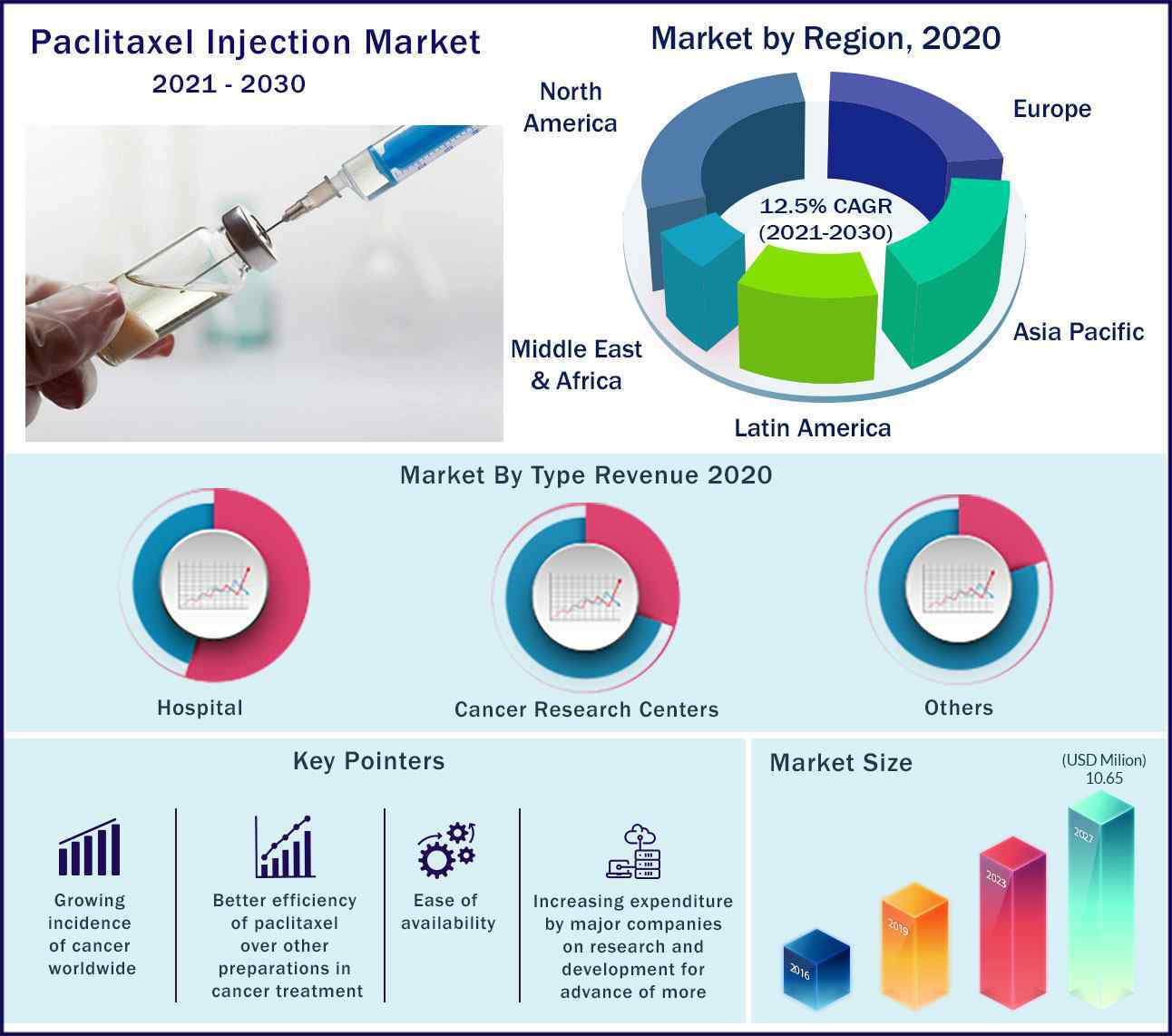 The detailed research report covers significant prospects and inclinations of paclitaxel injection products throughout different regions including Europe, North America, Asia-Pacific, Africa, Middle East, and Latin America. By region, paclitaxel injection market is led by North America due to heavy expenditure in cancer research and existence of skilled physicians. Europe reported the second maximum share predominantly due to presence of evolved reimbursement scenario. On the contrary, Asia-Pacific is anticipated to witness the rapid growth rate, on account of increasing investment by major manufacturers, high prevalence of cancer, and growing per-capita healthcare expenditure.

In order to well recognize the present status of enzyme-linked immunosorbent assay (ELISA), and policies implemented by the foremost nations, Precedence Research projected the future progress of the paclitaxel injection market. This research report bids quantitative and qualitative insights on paclitaxel injection market and valuation of market size and progress trend for probable market segments.