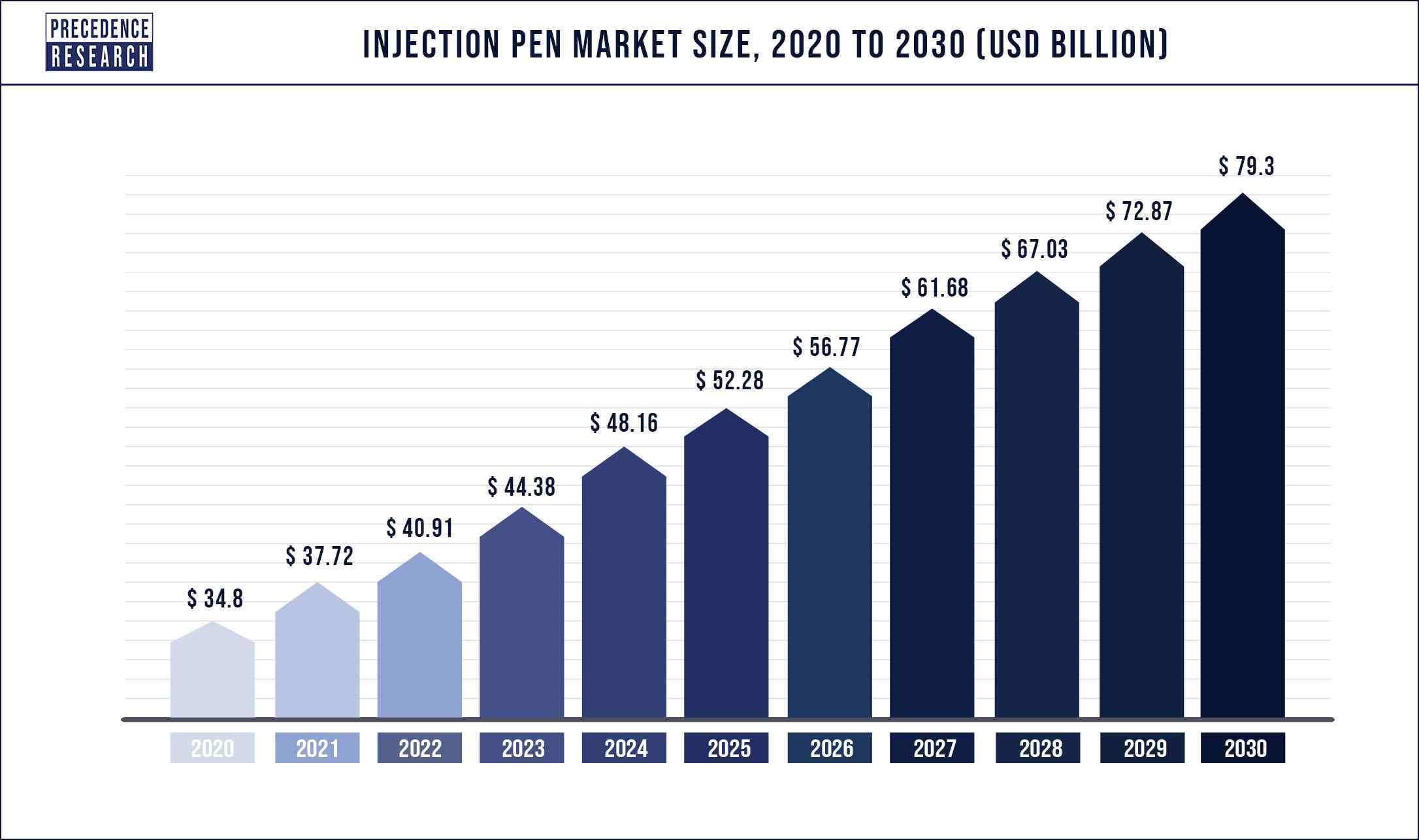 There are several factors such as growing prevalence of chronic diseases, technological advancements in the drug delivery devices, rising investments in research and clinical trials, rising number of government approvals, and favorable reimbursement policies are significantly driving the growth of the global injection pen market. The inconveniences associated with the traditional syringes is the prominent factors that are shifting the consumer preference towards the advanced injection pens. The growing investments by the pharmaceutical manufacturers in the development of new drugs is fueling its demand among the consumers, which in turn is boosting the demand for the injection pens for efficiently administering drugs. The growing healthcare expenditure and rising awareness regarding the availability of the innovative injection pens is spurring the growth of the global injection pen market. The conveniences associated with the injection pens allows the patients to self-administer drugs without the need for any professional assistance, which also reduces the cost. Hence, the injection pens are gaining rapid traction among the patients who frequently requires to administer drugs.

The rising burden of chronic diseases such as cancer, diabetes, autoimmune diseases, and cardiovascular diseases is exponentially contributing towards the growth of the injection pen market. According to the International Agency for Research on Cancer, in 2020, around 19.3 million new cancer cases and 10 million cancer deaths were reported across the globe. According to the International Diabetes Federation, currently around 537 million people are living with diabetes and this number is expected to reach at 783 million by 2045. According to the World Health Organization, diabetes is a major cause of kidney failure, blindness, and stroke. Moreover, cardiovascular diseases accounts for 32% of the global deaths and it is the leading cause of death across the globe. Therefore, the growing prevalence of various chronic and non-communicable diseases among the global population is expected to spur the demand for the injection pen market across the globe.

Scope of the Injection Pen Market

Based on the therapy, the global injection pen market was dominated by the diabetes segment. The unhealthy food habits results in the increasing blood glucose levels. It is a major cause of type 1 diabetes. When the body becomes resistant to insulin, it results in the occurrence of type 2 diabetes. The rising prevalence of type 1 and type 2 diabetes among the global population is fueling the growth of this segment. According to the International diabetes federation, the global diabetic population is estimated to reach at 643 million by 2030.

The cancer is estimated to be the fastest-growing segment. This rising cases of cancer owing to rising prevalence of smoking, growing alcohol and tobacco consumption, rising consumption of processed food, and various other factors, the number of cancer cases is expected to grow rapidly. According to the International Agency for Research on Cancer, the global cancer cases are estimated to grow by 47% from 2020 to 2040. It is expected that 28.4 million cases will be recorded in 2040, globally. The lungs cancer, breast cancer, and prostate cancer are the most prominent cancer types across the globe.

Based on the end user, the homecare segment dominated the global injection pen market in 2020. The increased awareness regarding the injection pens, rising disposable income, rising consumer expenditure on healthcare, and growing adoption of innovative drug delivery devices among the patients to manage diseases are the major factors that boosts the growth of this segment. The injection pens allow the patients to self-inject drugs by eliminating the healthcare professional assistance and hence, the homecare segment has witnessed a significant growth in the global injection pen market.

Based on region, North America dominated the global injection pen market in 2020. This is attributed to the increased prevalence of non-communicable diseases such as diabetes, cancer, cardiovascular diseases, and multiple sclerosis in the developed market like US and Canada. According to the US CDC, around 34.2 million people were living with diabetes and around 88 million people had pre-diabetes in US in 2020. The increased prevalence of diabetes among the US population has boosted the adoption of injection pen. The increased health consciousness, higher healthcare expenditure, increased awareness regarding the innovative drug delivery devices, and easy availability of injection pens and its cartridges are the major factors that has augmented the growth of the North America injection pen market.

Asia Pacific is estimated to be the most opportunistic market during the forecast period. The growing prevalence of various chronic diseases among the population owing to the unhealthy food habits, physical inactivity, and increasing consumption of alcohol and tobacco among the youth population. Most of the deaths due to the chronic diseases are recorded in the low and middle income countries, which offers the huge growth potential to the market players in Asia Pacific region.

Some of the prominent players in the global injection pen market include: