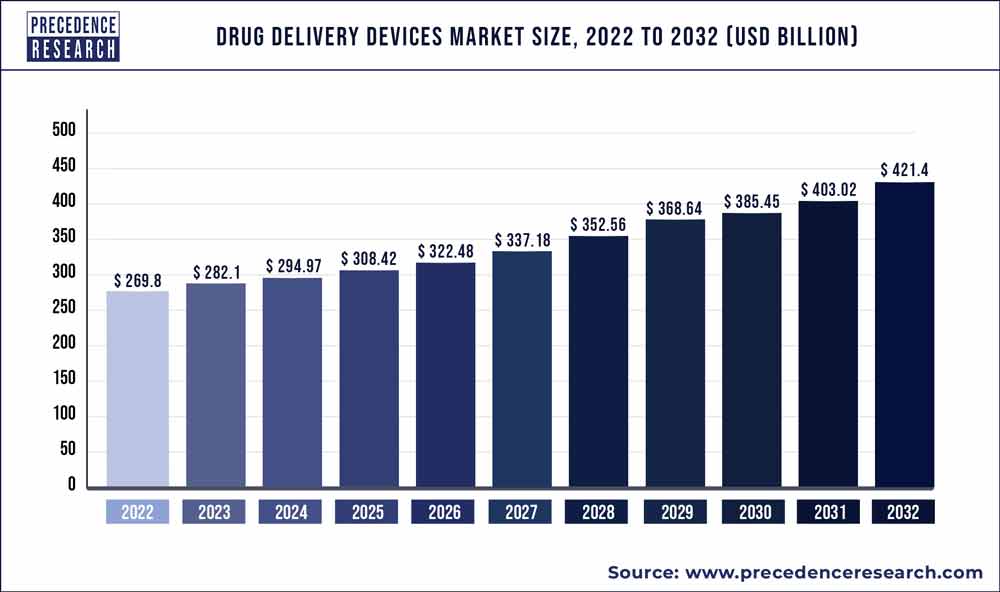 The technological advancements in the medical device manufacturing has led to the development of innovative drug delivery devices that ensures right amount of medicine is administered to the patient at the right time. Moreover, the rising burden of chronic diseases such as diabetes, CVDs, cancer, and COPD is fueling the demand for the drug delivery devices. According to the International Agency for Research on Cancer, in 2020, around 19.3 million new cancer cases and 10 million cancer deaths were reported across the globe. The global cancer cases are estimated to grow by 47% from 2020 to 2040. It is expected that 28.4 million cases will be recorded in 2040, globally. Moreover, the CVD accounted for around 32% of the global deaths in 2019. The rapid growth of the biopharmaceuticals and development of various drugs that can cure the chronic diseases efficiently fostered the demand for the drug delivery devices across the globe.

The rapid growth of the biopharmaceutical industry is resulting in the development of various new drugs that are effective in treatment of various diseases. The rising investments by the drug manufacturers in the clinical trials and the active role played by the various authorities like FDA and EMA is boosting the development of innovative new drugs. The new to the market drugs sometimes requires innovative delivery devices, which boosts the need for the various drug delivery devices. Moreover, the presence of several top players and the developmental strategies like acquisitions, mergers, collaborations, and new product launches augments the market growth. Furthermore, the increasing investments in the marketing activities by the market players positively impact the market growth.

Based on the application, the cancer segment dominated the largest market share in 2022. This is attributed to the increased prevalence of cancer among the population. The global cancer cases are estimated to grow by 47% from 2020 to 2040. It is expected that 28.4 million cases will be recorded in 2040, globally. Hence, the increased prevalence of various cancer such as breast cancer, lungs cancer, bowel cancer, and womb cancer are the major drivers of this segment.

The cardiovascular segment is estimated to be the fastest-growing segment during the forecast period. The rising prevalence of CVDs among the population owing to the unhealthy food habits and inactivity is boosting the growth of this segment. According to the World Health Organization, CVDs accounted for 32% of the global deaths in 2019.

Based on the end user, the hospitals segment has held revenue share of over 29% in 2022. This is due to the increased penetration of the hospitals across the global. The rising investments by the government and the corporate sector in the development of the hospitals had contributed to the growth of this segment. Moreover, the increased number of hospital admissions is further fueling the segment’s growth.

The diagnostics senters segment has generated revenue share of 25% in 2022. 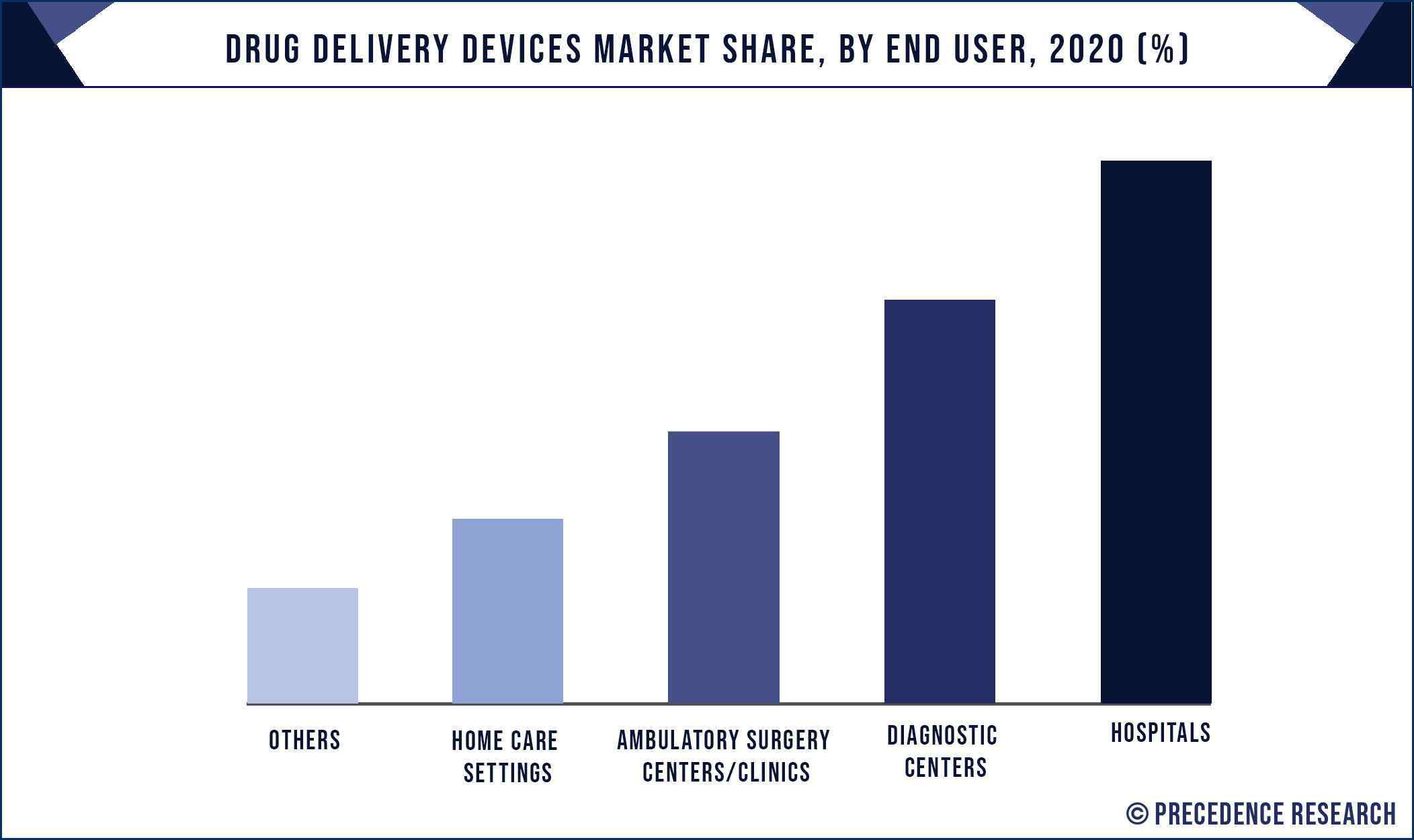 On the other hand, the home healthcare segment is estimated to be the most opportunistic market during the forecast period. The increasing geriatric population, increased disposable income, rising demand for getting the treatment at home, and increased awareness regarding the hospital acquired infections are the major drivers of this segment.

Based on region, North America accounted largest revenue share in 2022. This is attributed to the rising prevalence of various chronic diseases such as diabetes, cancer, and CVDs in US. Moreover, the increased health consciousness and increased healthcare expenditure in US has boosted the growth of the market. In 2018, the per capita healthcare expenditure was more than US$ 10,500. The increased awareness regarding the availability of various innovative drug delivery devices like wearable injectors and pen injectors has significantly contributed towards the growth of the drug delivery devices in North America. 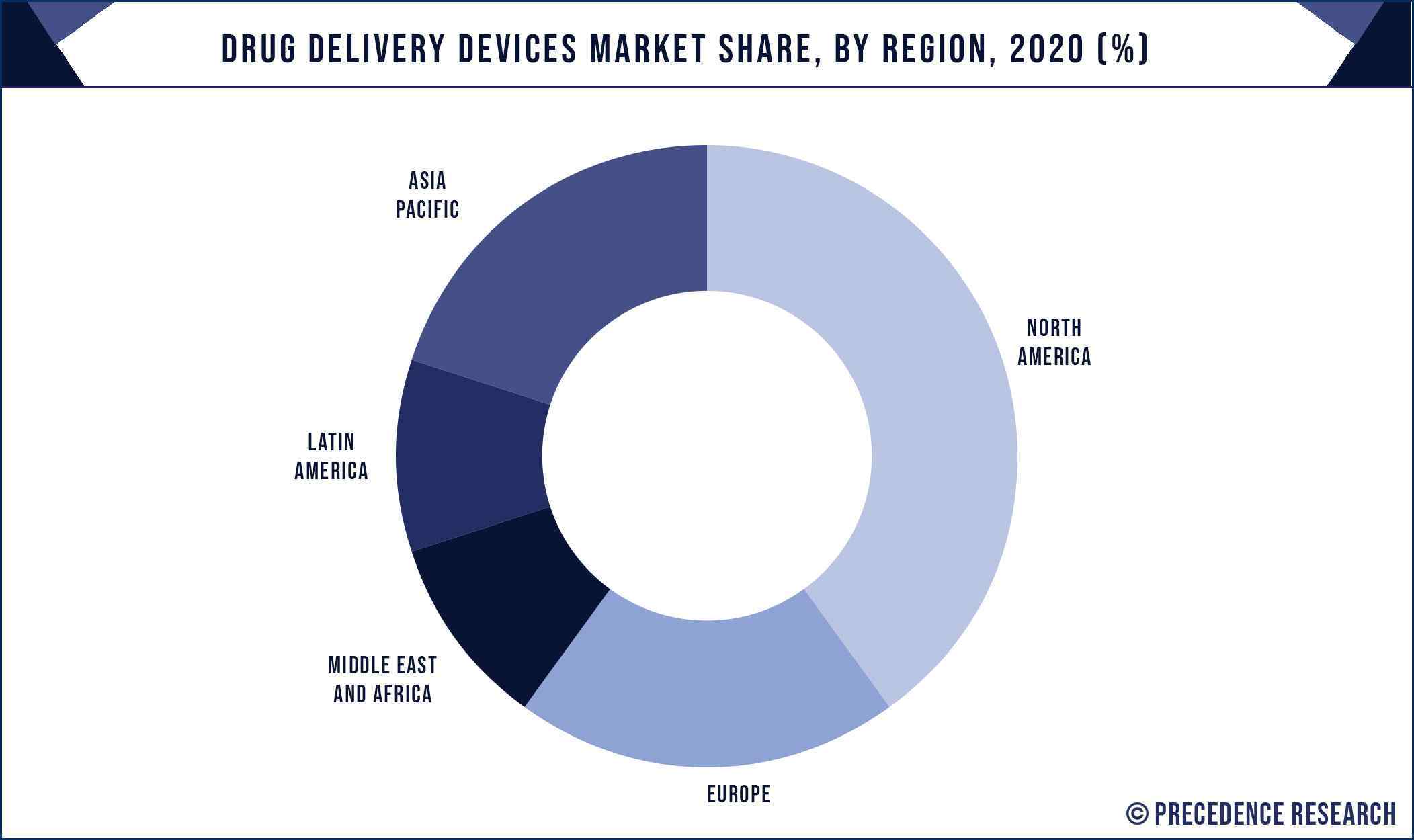 Asia Pacific is estimated to be the most opportunistic market during the forecast period. This can be attributed to the rising prevalence of various diseases due to the changing consumption pattern and unhealthy food habits of the population. Moreover, the rapidly growing geriatric population is expected to fuel the market demand as the old age people are more prone to the diseases. According to the United Nations, 80% of the global geriatric population will be living in low and middle-income countries.

Some of the prominent players in the global drug and gene delivery devices market include: