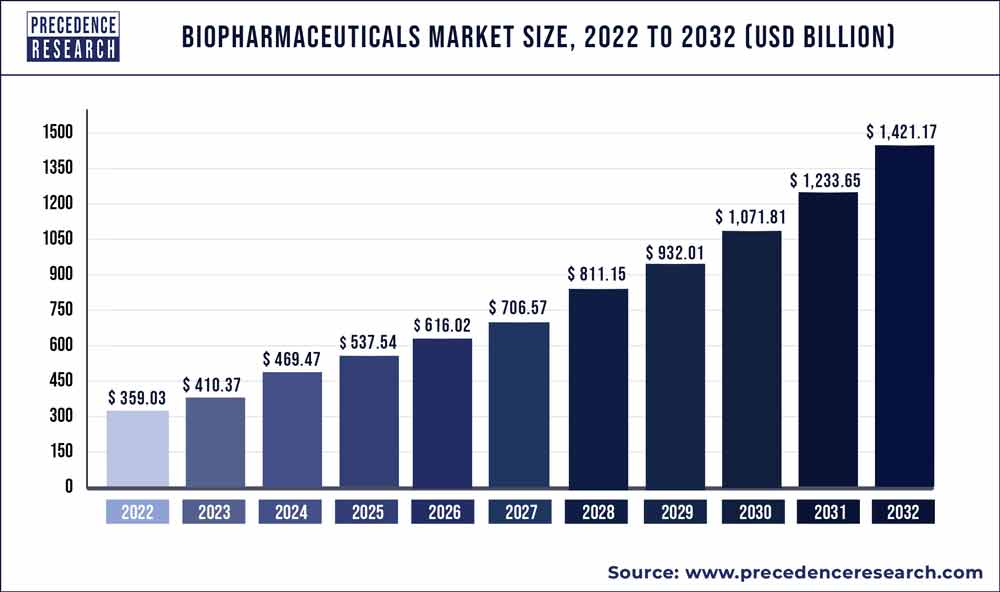 The high therapeutic value of the biopharmaceuticals owing to the use of living microorganisms and anima cells in the production of the biopharmaceutical medicines are efficient in providing the treatment for numerous chronic diseases such as cancer, CVDs, diabetes, COPD, and various others. According to the International Agency for Research on Cancer, in the year 2020, around 19.3 million new cases of cancer were diagnosed and around 10 million cancer deaths were recorded. The cancer cases are estimated to grow by 47% from 2020 to 2040. Moreover, according to the International Diabetes Federation, the diabetic population is estimated to reach at 552 million globally, by 2030. According to the WHO, diabetes is a major cause of kidney failure, blindness, and stroke. . According to the World Health Organization, around 65 million people across the globe suffers from COPD. Therefore, the rising prevalence of various chronic diseases are expected to be the major drivers of the global biopharmaceutical market during the forecast period. Moreover, growing geriatric population across the globe is anticipated to boost the demand for the biopharmaceutical drugs as the geriatric people are more prone to the chronic diseases. According to the WHO, the global geriatric population is estimated to reach at around 2 billion by 2050.

Scope of the Biopharmaceuticals Market Report

On the other hand, the vaccines is estimated to be the most opportunistic segment during the forecast period. This is attributed to the rising burden of diseases and rising investments by the developers in the development of vaccines.

Based on the application, the oncology segment dominated the global biopharmaceutical market in 2020, in terms of revenue. This simply attributable to the increased adoption of the biopharmaceuticals in the treatment of various cancers such as lungs cancer, breast cancer, colorectal cancer, and prostate cancer. The global cancer cases is rising at an alarming pace. The global cancer burden is expected to reach at 28.4 million by 2040, rising by 47% from 2020, according to the International Agency for Research on Cancer.

On the other hand, the cardiovascular disease is estimated to be the most opportunistic segment during the forecast period. According to the World Health Organization, around 17.9 million death occur due to the cardiovascular diseases each year, contributing to around 32% of the global deaths each year. Therefore, the increased prevalence of CVDs across the globe, and rising investments by the biopharmaceutical manufacturers to develop innovative drugs for the CVDs is expected to fuel the market growth during the forecast period.

Based on region, in 2020, the North America dominated the global biopharmaceutical market in terms of revenue. The increased investments by the market players and supportive government policies in the huge market like US is supplementing the market growth. In fact, US holds the intellectual property rights of the majority of the newly produced medicines. Further, increased healthcare expenditure, increased awareness regarding the availability of biopharmaceuticals, and increased prevalence of various chronic diseases had resulted in the dominance of North America in the global biopharmaceutical market. According to the American Cancer Society, in 2020, around 1.8 million new cancer cases and 606,520 cancer deaths were reported in the US. Moreover, it is estimated that around 60% of the American population are suffering from at least one chronic diseases. Hence, the demand for the biopharmaceuticals is high in North America.

On the other hand, Asia Pacific is estimated to be the most opportunistic market during the forecast period. Asia Pacific is home to around 60% of the global population. The rising prevalence of various chronic disease in the region, rising healthcare expenditure, and growing government investments in the development of sophisticated healthcare infrastructure in the region is expected to boost the growth of the biopharmaceutical market. Moreover, the region is characterized by the presence of few of the top CMOs, which significantly contributes towards the growth of the market.

In July 2021, Takeda Pharmaceutical entered into a partnership with Frazier Healthcare to form a new biopharmaceutical company named HilleVax.

Some of the prominent players in the global biopharmaceuticals market include: