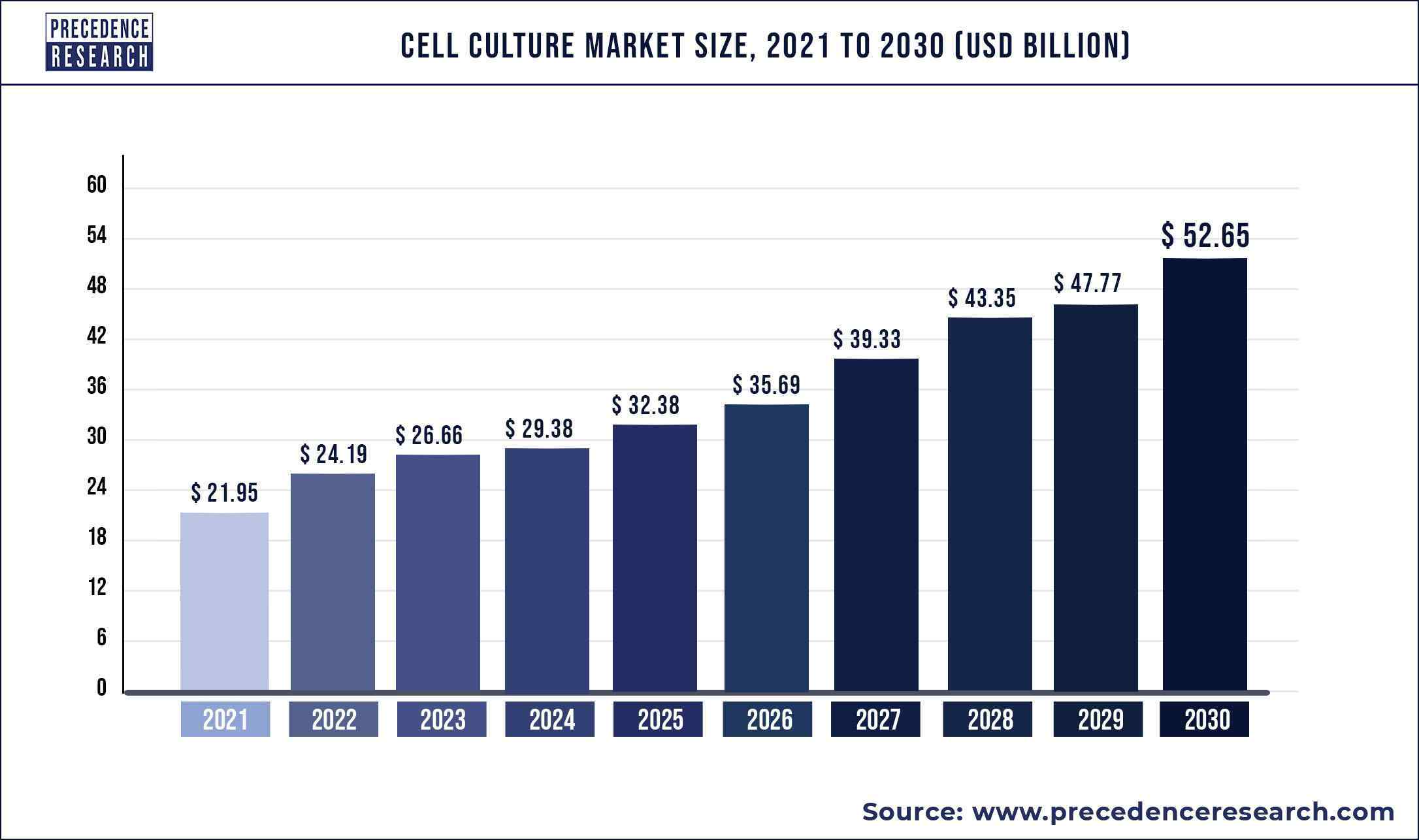 The process of cell culture includes growth of cells beneath controlled conditions, usually out of their regular environment. Interested cells are then separated from livelihood tissue. They are being able to sustain beneath the controlled condition consequently. The global cell culture market is expected to grow at a significant rate during the forecast period owing to the rising awareness regarding the benefits of cell based vaccines, rising prevalence of chronic diseases, surging demand for monoclonal antibodies, rising funds for cell based research, rising adoption of single-use technologies, shifting focus towards personalized medicine, and the introduction of advanced cell culture products. The development of novel 3D cell culture techniques and surging demand for these techniques in biopharmaceutical industry for the development of vaccines and biopharmaceutical drugs is expected to drive the growth of the global cell culture market.

Rising technological advancements in the proteomic gene expression and the development of novel biopharmaceuticals and vaccines is fostering the demand for the 3D cell culture technologies across the globe. The rising prevalence of cancer and growing number of cancer research projects and improved applications of gene therapies is driving the growth of the global cell culture market. The presence of various contract manufacturing and research firms are positively contributing towards the growth of the cell culture market. The rising incidences of chronic diseases among the global population have attracted the investments towards the cytology and biology research studies.

The methods of 3D cell culture are earning traction upon 2D methods of cell culture owing to numerous factors. The growth of cells is done on the flat surfaces as single layers of 2D. Nevertheless, these cells stick to vessels as well as connect to cells in the direction of the boundary. This restricts complex cell cultures. To solve this problem, scientists have pop up with a solution of 3D cell cultures. This solution has been effective in various studies of fundamental biologic mechanisms like viability, morphology, number monitoring, and proliferation.

Further, these cell cultures have a longer lifespans and higher stability in comparison with 2D cultures. Various market players have invested in these cell cultures owing to its advantages. For instance, Lonza announced the collaboration with CELLINK to provide solution for 3D bio printing prepared to develop whole 3D cell culture methods in the year 2020. Corning Incorporated expanded its cell culture portfolio by adding two 3D products which contains matrix and microplate in the year 2019.

In addition, market players have increased their concentration over the products like microfluidic organ-on-a-chip illustrations. These chips are designed to imitate organ physiology. The growth of 3D cells happens inside the cubicle of microchip in the scaffolds. Key market players are investing in different startups to speed up the sales and marketing of these 3D cell culture products. For instance, the U.S. based startup Kiyatec Inc. announced that it has received funding of $3 million to advance 3D cell culture for the detection of cancer in individuals in the month of May, 2019. InSphero is an inventive supplier of platforms which are based on 3D cell for efficiency testing as well as for the discovery of drugs. These kind of efforts from the investors and the prominent market players are anticipated to provide lucrative opportunities for the global cell culture market over the next decade.

Based on the product, the global cell culture market was dominated by the consumables segment. The rise in the funding for the cell based studies has significantly fostered the consumption of consumables. The rapidly growing number of biopharmaceutical companies, contract manufacturers, contract research organizations, and academic research institutes is a major factor behind the increased demand for the consumables across the globe. The growing prevalence of diseases, rising focus on personalized medicine, and growing number of research studies are expected to boost the growth of consumables segment during the forecast period. 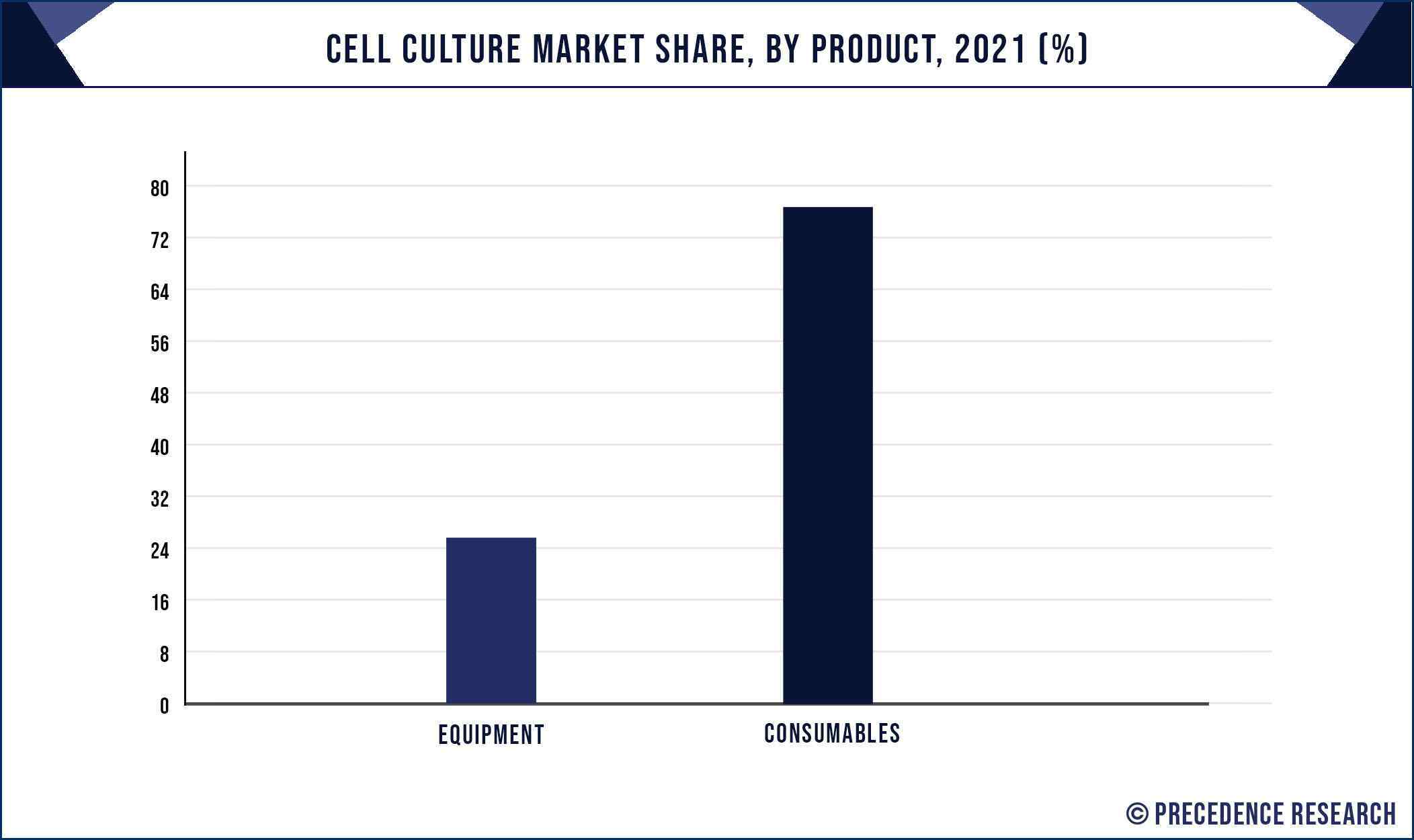 On the other hand, the equipment is expected to be the fastest-growing segment during the forecast period. The rising technological advancements and high profit margins associated with the various cell culture equipment are boosting the growth of this segment. The rising demand for the equipment among the cell culture application development companies and the research laboratories is fueling the market growth significantly. The introduction of automation and robotics is expected to enhance the performances and boost the market growth in the forthcoming future.

Drug discovery is anticipated to be the most opportunistic segment during the forecast period. The demand for the latest and innovative drugs owing to the rising prevalence of various chronic and gene related diseases among the population is boosting the demand for the cell based research studies for the development of novel therapies and vaccines. Cell culture is known to be an integral part of the research and drug discovery process. Previously, 2D culture was adopted but with the introduction of 3D culture techniques, the global cell culture industry has witnessed an evolution. The 3D cell culture has made the cell based high throughput screening more accurate and easier. The rising investments by the biopharmaceutical companies in the drug discovery process to develop innovative and effective therapies and vaccines is expected to boost the growth of the drug discovery segment in the cell culture market in the upcoming future. 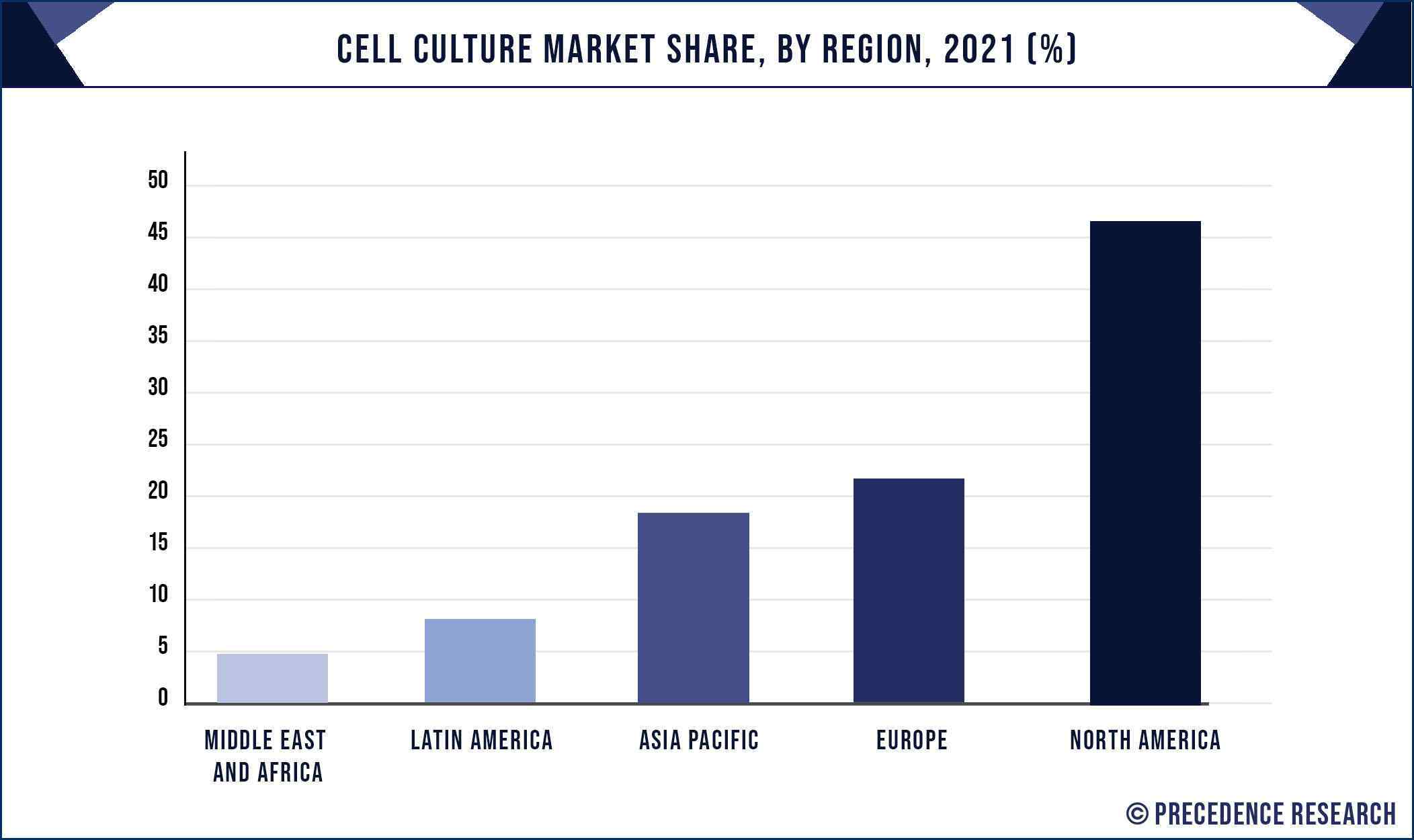 The unprecedented rise in the cases of the COVID-19 pandemic has induced various companies operating in the biotechnology and pharmaceuticals to manufacture antiviral drugs or vaccines to fight against it. Some of them got the approval and some are under advancement and getting manufactured. Cell culture is plays a vital role in the advancement of drug, as a result boosted the demand for cell culture products.

Viral vaccines developed on the basis of cell culture are considered the most effective to boost the immunity of humans against the caused infections. SARS-COV-2 virus employs mammalian cell lines for several research and developments. Following the maintained level of pharmaceutical efficiency, nutrients and components needed to develop cells beneath the conditions of controlled environment, cell mediums come in the usage. Products of cell culture which include equipment, culture media, as well as reagents support scientists to examine cellular behavior, which is going to aid the advancement of vaccines.

Research and development of vaccines require cell culture technologies, which are anticipated to boost its usage in the coming time. The Indian Council of Scientific and Industrial Research (CSIR) based Center for Cellular and Molecular Biology (CCMB) has found the constant cultures of the virus SARS-CoV-2 out of the samples of patients. The effective usages of this have been determined for manufacturing vaccines, checking of antibodies, screening of drugs, and other activities.

The process of cell culture is the constant one of advancing layers for safe manufacturing of the products like viral vaccines. Despite all this, safety rules are being stricter for the manufacturing of vaccines to stop the spread of this deadly virus, thus enforcing producers and scientists to manufacture viral vaccines with the help of cell culture products. This factor considerably augmented the demand for cell culture products, in return helped grow the revenue growth trajectory especially during the years 2020 and 2021.

Some of the prominent players in the global cell culture market include: