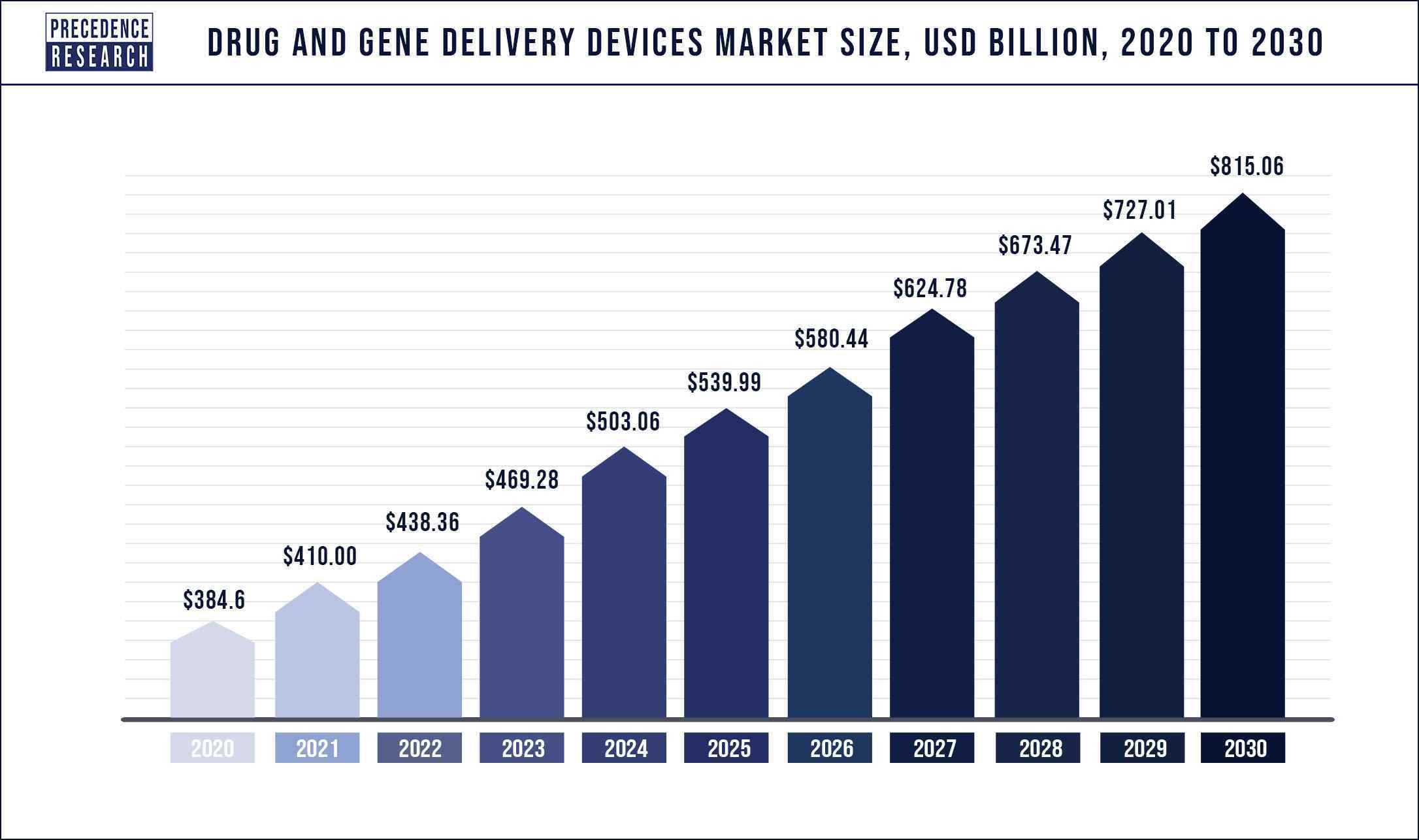 The rising prevalence of various chronic diseases such as cancer, diabetes, cardiovascular diseases, and other chronic diseases coupled with the technological advancements in the drug delivery has propelled the growth of the global drug and gene delivery devices market. According to the International Agency for Research on Cancer, in 2020, around 19.3 million new cancer cases and 10 million cancer deaths were reported across the globe. The global cancer cases are estimated to grow by 47% from 2020 to 2040. It is expected that 28.4 million cases will be recorded in 2040, globally. Moreover, the increasing investments in the research and development by the top players in the field of genomics is driving the market growth. The shifting preferences of the patients and the doctors has propelled the demand for the drug and gene delivery devices. The introduction of auto injectors, biopharmaceutical classification systems, implants in customizable shapes and sizes, and smartcards and adaptive aerosol delivery systems have contributed significantly towards the development of the global drug and gene delivery devices market.

The rising adoption of the gene therapeutics and innovative drugs owing to the rising awareness regarding the availability of new drugs that can effectively cure the chronic diseases has fueled the demand for the drug and gene delivery devices. The rising investments in the research and development of the new drugs and therapies for treating the incurable diseases is among the significant drivers of the market. Moreover, the rapid growth of the biopharmaceutical industry across the globe is expected to play a crucial role during the forecast period. The presence of the numerous market players and the various strategies such as new product launches, acquisitions, mergers, and partnerships adopted by them highly influences the market growth. Therefore the rising penetration of the drug and gene delivery devices companies across the globe is boosting the market growth significantly.

Report Scope of the Drug and Gene Delivery Devices Market

Based on delivery type, the oral segment dominated the global drug and gene delivery devices market in 2020, in terms of revenue and is estimated to sustain its dominance during the forecast period. The oral drug delivery is the most convenient and most popular route of administration all over the globe. It is economical, pain-free, and self-administered type of delivery where no sterile precautions are involved. Moreover, the development of various therapeutics that can identify the affected cell and can treat that cell without harming the normal cells is exponentially boosting the growth of this segment. Therefore, the rapid growth of the biosimilar, targeted therapeutics, and gene therapies had positively impacted the market growth in the past few years.

On the other hand, the injectable is estimated to be the most opportunistic segment during the forecast period. The technological advancements in the injectable devices has propelled the adoption of the self-injectable devices among the patients. The rising number of diabetic population is fostering the growth of this segment as the diabetic patient need to regularly inject insulin. The increasing popularity of the self-injectors, needle-free injectors, pen-injectors, and auto-injectors has allowed the patients to conveniently administer drugs from the convenience of their home, eliminating the medical assistance. All these factors are estimated to have a significant impact on the drug and gene delivery devices market and will foster the demand for the injectable segment in the forthcoming years.

Based on method, the in situ segment accounted largest revenue share in 2020 and is projected to remain its dominance during the forecast period. This can be attributed to the certain advantages associated with the in situ method such as low complication in fabrication and ease of drug administration. Moreover, the majority of the drugs that are currently used follows the in situ method.

Based on vector, the viral vector segment accounted largest revenue share in 2020. Most of the clinical trials that are based on the gene therapies are dependent on the viral vectors for transfection. The rising prevalence of the genetic diseases is the major factors that boosts the growth of this segment. The extensive usage of viral vectors in the treatment of various chronic diseases has fueled the segment’s growth in the past few years. 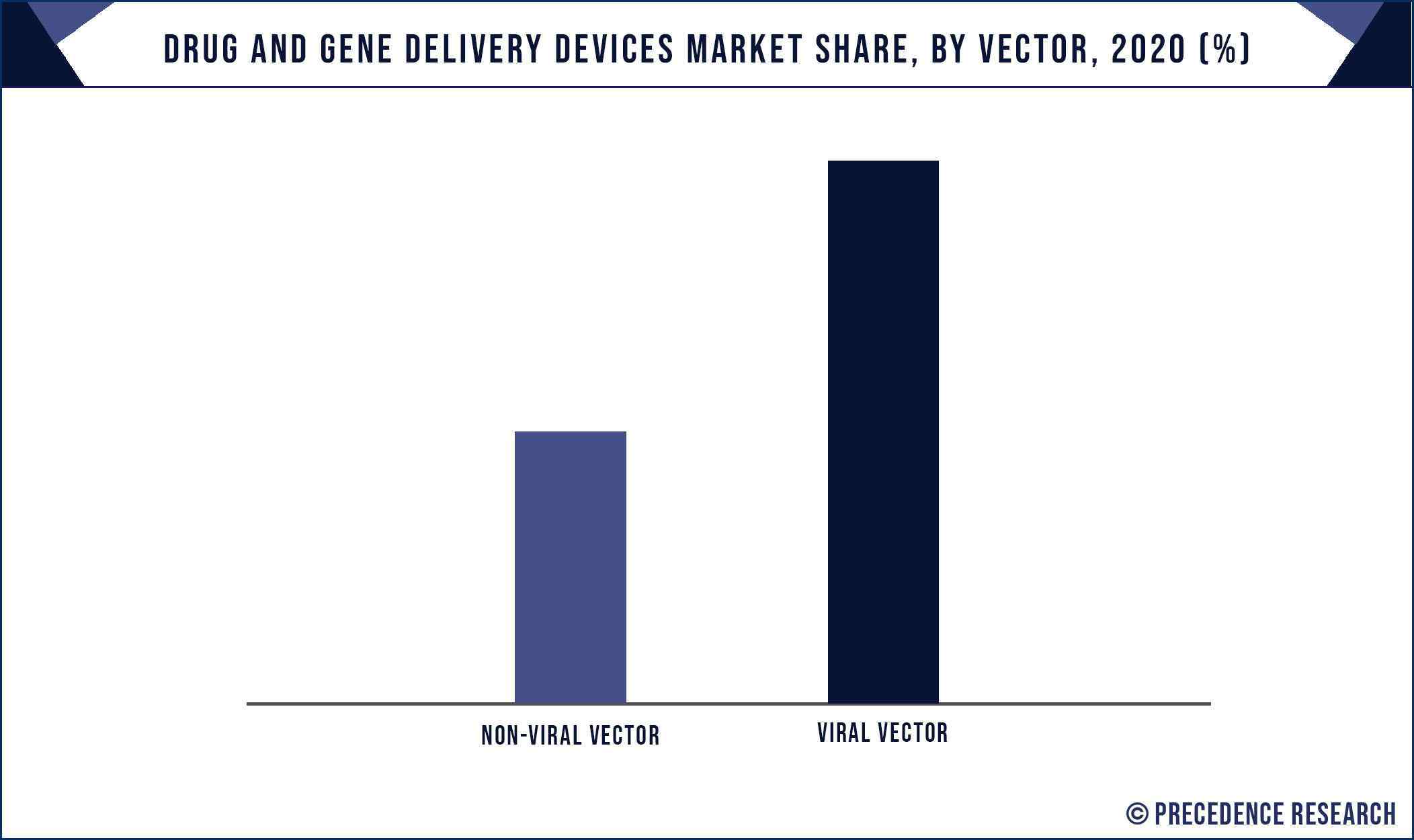 Based on region, North America dominated the global drug and gene delivery devices market in 2020, in terms of revenue and is estimated to sustain its dominance during the forecast period. This is attributed to the increased number of people suffering from various chronic diseases. According to a study, around 60% of the US population is suffering from at least one chronic diseases. Moreover, the development of various therapeutics and innovative drugs that can effectively treat chronic diseases and genetic diseases is fueling the demand for the drug and gene delivery devices market. Moreover, the rising popularity of personalized medicines may impact the market positively in the forthcoming years. 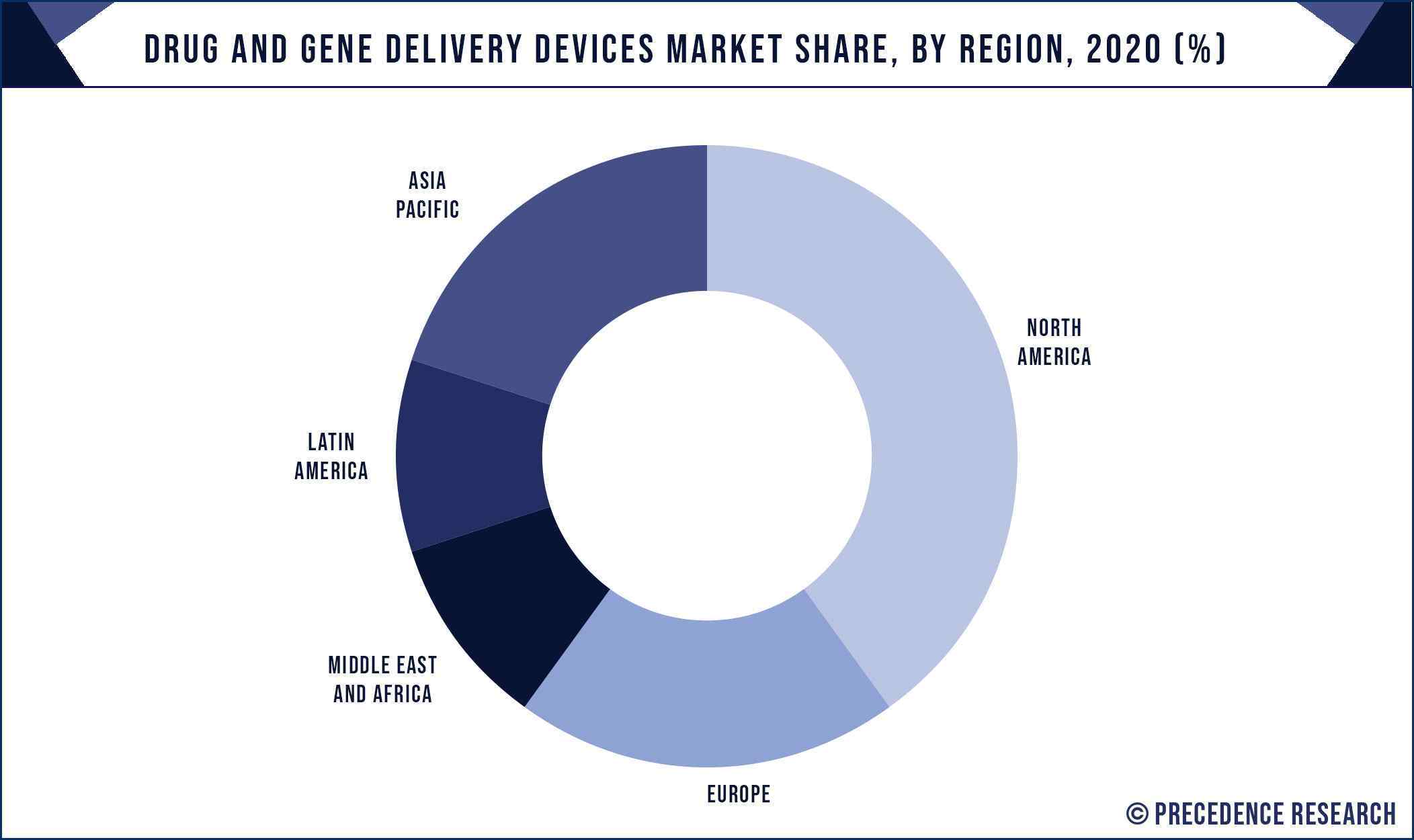 Asia Pacific is estimated to be the most opportunistic market during the forecast period. This is attributed to the rising prevalence of various chronic and infectious diseases, rapidly growing biopharmaceutical industry, presence of huge population, and rising prevalence of diseases caused by pollution owing to the rapid industrialization and urbanization.

Some of the prominent players in the global drug and gene delivery devices market include: