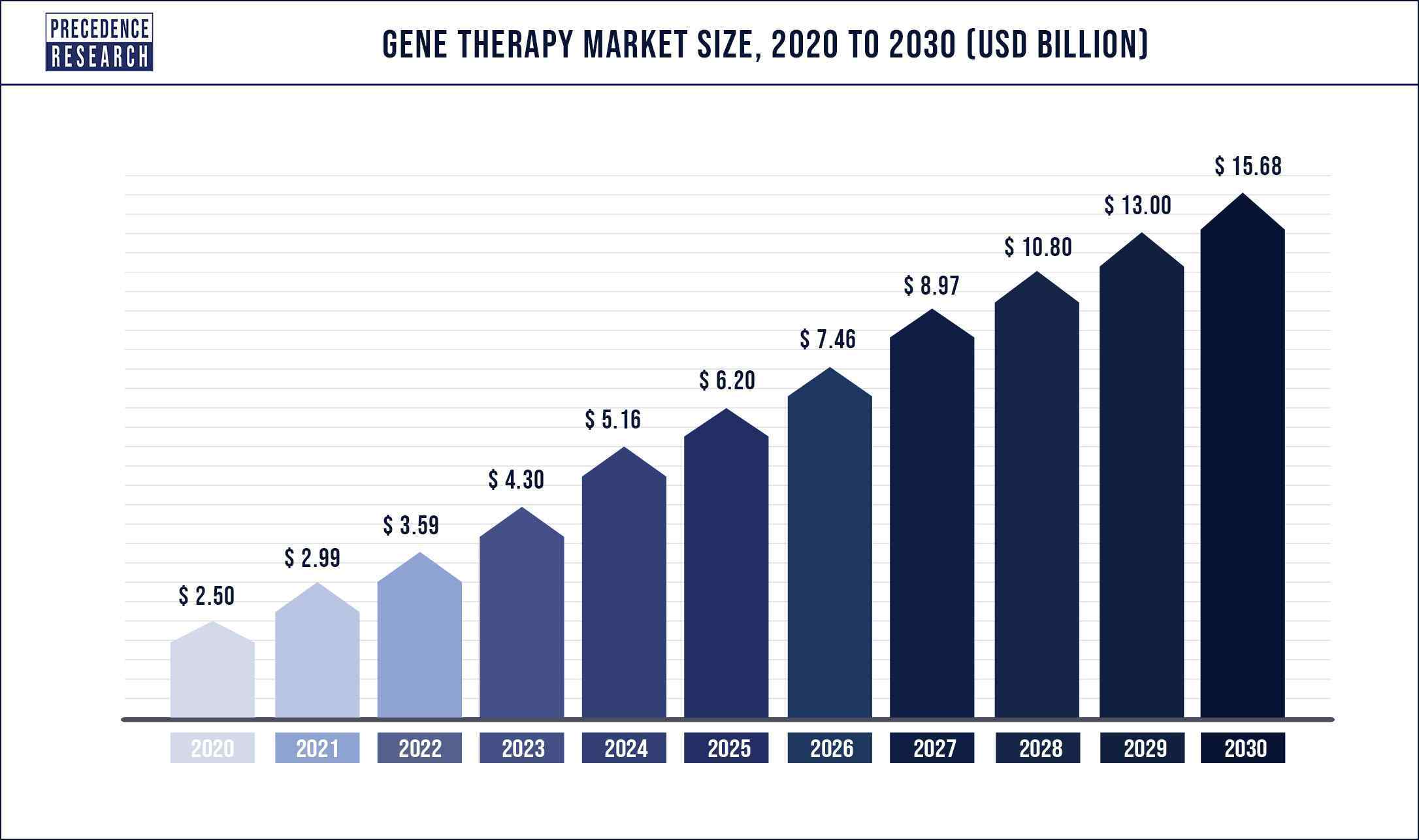 The gene therapy is described as the treatment of an illness by changing, replacing, or supplementing a missing or defective genetic combination that is responsible for the disease. The gene therapy has become one of the most desirable research goals in the fight against degenerative illnesses. The need for gene therapy is being driven by an increase in the number of cases of cancer and other chronic diseases all across the world. The advancements in gene therapies are projected to be approved in the upcoming years, contributing to the gene therapy market’s growth during the forecast period.

The gene therapies are designed to treat diseases by altering genetic information, such as inactivating malfunctioning genes or replacing a disease-causing gene with a healthy copy of gene. The gene therapy is being utilized to treat a variety of disorders and has demonstrated to be effective. This form of treatment can cure diseases such as diabetes, cancer, heart disease, and AIDS.

The growth of the gene therapy market is influenced by factors such as a strong product portfolio, the expanding investments by key market players, and a high prevalence of target diseases and interest in innovative and new therapy. Nonetheless, the high cost of product development and strict management tactics are expected to hinder the growth of gene therapy market.

Furthermore, the increased investment in research and development by government and private organizations will create further prospects for the growth of gene therapy market during the forecast period. However, the severe side effects such as poor immune responses could stymie the gene therapy market’s expansion in the near future.

The advanced therapeutic solutions for chronic diseases are being used in developed countries. As a result, traditional treatment methods like as chemotherapy, which have adverse side effects and long-term repercussions, are being replaced with this treatment. For the development of such medicines, there is also a shift in trend towards the use of viral vectors, which have a low toxicity and high immunology.

The rapid technological advancements in cellular and molecular biology in genomics research, have contributed greatly to the growing gene therapy market in recent years. The academicians, researchers, and in-house researchers of major market companies with significant funding have all played critical roles.

In many industrialized countries, the frequency of cardiovascular diseases is increasing, and there is a growing need to cure these diseases in less time, resulting in players investing extensively in research and development of highly effective and innovative therapeutics such as gene therapy. The prevalence of rare diseases such as cardiovascular and cancer diseases will have positive impact on the demand for gene therapy applications.

Scope of the Gene Therapy Market

On the other hand, the non-viral vector segment is estimated to be the most opportunistic segment during the forecast period. This is due to the widespread availability of non-viral vector gene treatments based on oligonucleotides.

Based on the application, the oncological disorders segment dominated the global gene therapy market in 2020, in terms of revenue and is estimated to sustain its dominance during the forecast period. Due to the approval of an increasing number of gene therapies for cancer therapy and the rising incidence of hematologic tumors, the oncological disorders segment is expected to grow at the fastest CAGR during the forecast period.

On the other hand, the neurological disorders segment is estimated to be the most opportunistic segment during the forecast period. The targeted gene therapy has advanced significantly, allowing for the treatment of important neurological illnesses using a variety of techniques ranging from exogenous gene expression to endogenous gene suppression.

Based on the region, the North America segment dominated the global gene therapy market in 2020, in terms of revenue and is estimated to sustain its dominance during the forecast period. The several government organizations are supporting research campaigns around the country, owing to the robust regulatory framework for cellular treatment development and the substantial presence of biopharmaceutical businesses.

On the other hand, the Europe is estimated to be the most opportunistic segment during the forecast period. The presence of modern healthcare infrastructure, availability of reimbursements, and the presence of significant industry players in the region are all major factors driving the growth of the gene therapy market in the Europe.

Some of the prominent players in the global gene therapy market include: