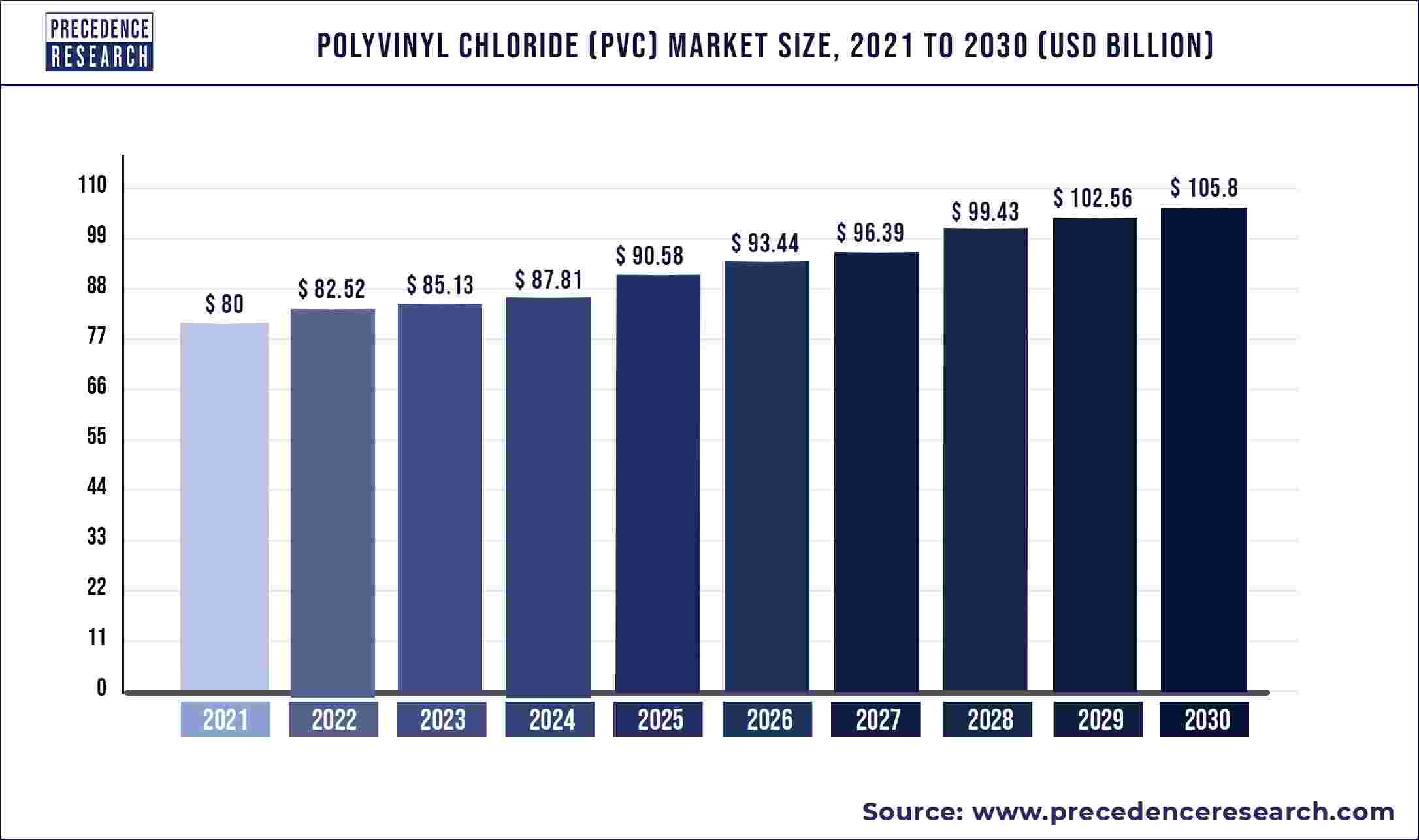 Polyvinyl chloride is the generally used thermoplastic resin polymer. It is white in color and fragile in nature. The bulk manufacture contains disruption polymerization. It is an artificial resin formed from vinyl chloride polymerization. Initially, the raw material vinyl chloride monomer is formed and dissolved, and then carried to the polymerization device, which has suspending essentials and water. The water controls and expels the temperature generated due to the polymerization method. PVC produces minute elements that progress and afterward, they get the essential size and the reaction is completed. Polyvinyl chloride is mainly organized into two groups Rigid and Flexible PVC. The PVC is detached and desiccated to form white snowy dust which is termed PVC resin. It is used in numerous importance like automobile, health care, electronics, building and construction, and other segments. They are widely used for the production of cables, wires, fittings, films, profiles, tubes, pipes, sheets, and bottles.

The global market of polyvinyl chloride observed more growth mainly during the period fostered by the fast growth rate of the electrical, and electronics, construction business, packaging industry, and automotive. Growing non-refundable revenues with increasing development and lashing population have given resistance to building expenditure which curses a stable request for service biochemical products. In the construction of pipes, window frames, and doors, stiff polyvinyl chloride is used. A rise in the usage of un-plasticized Polyvinyl chloride instead of the use of wood in sills and frames of windows will increase the requirement for PVC in the sector of the building during the period of the forecast. Additionally, polyvinyl chloride is used for specific wrappings like apparatus packaging, medical devices, bottle sleeving, and wrapping of electronic and other useful products. An increasing packaging business, mostly utilizing plastics is expected to increase the global market for Polyvinyl chloride.

The features like the banned usage of polyvinyl chloride in the structure of green buildings and rigid rivalry between concrete pipes & steel constrain the development of the market. However, the developments in types of machinery, usage of highly effective pumps, & renewable energy, rising electronic vehicle demand, renewable PVC expansions, development of wood-plastics complexes, and unexploited latent in emergent markets proposal increases the growth chances. There are some limitations and restrictions come across will restrict the growth of the market. Additionally, the financial stoppage has exaggerated construction and automotive markets in the Canada and U.S. This is also a possible limitation hindering the global market growth of polyvinyl chloride. Polyvinyl chloride is the most broadly used plastic. It is formed by vinyl chloride monomers polymerization. It is further converters to adjust its belongings conferring to the demand of end users in the market of polyvinyl chloride. It is extensively working for industrial pipes, tubes, fittings, sheets, bottles, profiles, films, cables, wires, and others. Several belongings like lightweight, better mechanical strength, abrasion resistance, and durability permit its extensive usage in automotive, construction, electrical industries, and packaging.

The flexible section grasps the most important share of the market and is projected to view the uppermost CAGR throughout the forecast. The features that can be credited to extensive tradition in structure importance like cables, pipes, wall & floor lids, fencing, and landfill liners need elasticity owing to composite assemblies. So, this boosts the market demand for this part. Stiff Polyvinyl chloride is a robust, rigid, low-priced polyvinyl chloride that is relaxed to produce and promises to use epoxy resin or diluents.

The rigid PVC part is expected to increase at a fast step throughout d Polyvinyl chloride is a type of PVC used in the production of machining shapes, pipes, sheets, fittings, ducts, and valves. Rigid polyvinyl chloride suggests the importance of shrill owing to its low price and more strength-to-weight relation. It is projected to preserve its dominance throughout the forecast.

The segment of construction grasps the major share of the market during the period of forecast. The features credited to the growing demand for improved organization amenities owing to growing development and fast industrial development improve the segmental demand. Construction is the foremost important end-use industry for the market for polyvinyl chloride (PVC). The segment of the construction business is expected to enlarge at a stable leap. It is an extremely common substantial working in the building segment, due to its small manufacture rate, the comfort of lightweight, and processing.

PVC is useful in diverse end-use industries, due to its appropriate chemical, physical, and automatic belongings. Its huge ductile strength is extremely valued for alternative building events. However, the stiff type of PVC is further trying to connect as associated to its elastic complement, conclusions of the description have composed a dissimilar yield of end users. This tendency is expected to increase throughout the forecast.

On the justification of the high strength, robustness, and cost-effective characteristics of PVC piping, the petition remains to rush in the segment of pipes & fittings. It is expected to increase at a noteworthy step throughout s generally formed flexible and is widely working in outlines, as it is inexpensive, strong, and relaxed to accumulate. Recent organization events need the usage of polyvinyl chloride in an extensive selection of high importance like the transference of waste water drainage, drinking water, and water drainage on the ground or roof.

Asia-Pacific grasps the major share of the market. Asia Pacific inhabits an important revenue portion in the market of polyvinyl chloride (PVC). India and China are the main local marketplaces for the justification of rushing structure actions. Also, the growing population, quick development, and disposable value income is credited for the considerable local market part. China has a major microchip technology manufacturing base. Electrical products like OLED TVs, smartphones, and tablets observed the maximum development in the customer microelectronics section of the market. It suggests hard rivalry with the current ambitious manufacturers, like Taiwan, South Korea, and Singapore. The Market for Polyvinyl chloride is controlled by China with the intake of the extreme capacity of PVC.

In China, the market for medical devices is the wildest-rising segment. Remote clinics in the nation are rarer, and the finding of health care products is mainly obsessed by huge municipal clinics, important to the growing tradition of medicinal strategies in community clinics. These issues troop the petition for polyvinyl chloride in the segment. The growing construction business, formation of industrial amenities, development of customer and electric & microelectronics businesses, and current developments will increase the market in the Asia Pacific region. The market for therapeutic devices in China has observed durable development owing to an increasing number of clinics and the growing demand for therapeutic support. Such features are likely to increase the market for polyvinyl chloride (PVC) in the region of Asia-Pacific.