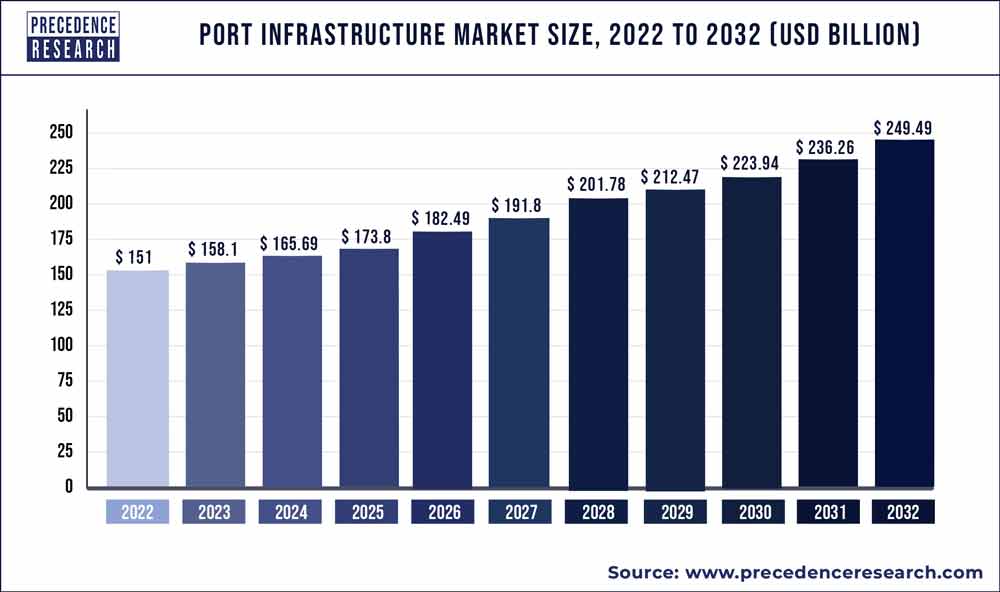 Increased government spending on port infrastructure is anticipated to assist the market for port infrastructure globally by ensuring safe and fruitful commercial activity. Additionally, it is anticipated that demand for the sector will rise as a result of the expansion and demand for liquefied natural gas exports via sea transport. Additionally, a lot of businesses depend on maritime shipping to import and sell goods internationally.

Governments are anticipated to increase their port infrastructure investments in order to assure secure and productive economic activity, which will help the port infrastructure market internationally. Demand for the industry is also predicted to increase due to the expansion and requirement for liquefied natural gas exports via marine transport. A lot of companies also depend on maritime shipping to import and export commodities worldwide. These elements are fueling global demand for port infrastructure. Since infrastructure and connection are the foundations of any nation, they support the trade of each nation with the rest of the globe. Consequently, this infrastructure is crucial to the entire growth of economies. In any commerce, distance and the method of transportation are the most crucial elements. By saving time, reducing traffic and congestion, and transporting heavier cargo, low-cost transportation enhances business operations. Marine commerce operations are growing in acceptance on a global basis due to this advantage over other modes of transportation. The construction of additional ports to handle marine traffic is also being promoted as a possibility in rising nations due to the strengthening of economic links and the growth of trade volumes. New ports are being built quickly in nations like China and India; for instance, India increased the number of its ports from 199 in 2008 to 217 in 2018. Additionally, there have been private entities involved in the construction of ship ports in several nations.

Moreover, the government has implemented a number of policy initiatives intended to promote growth in the port industry, certain policy reforms are required to quicken countries port sector's development. These reforms ought to focus on enhancing the port infrastructure at ports, implementing new land policy for significant ports, establishing a port regulator at each port to oversee services and technical and performance standards, streamlining the environmental clearance process for port projects, creating a special purpose vehicle for investing in ports, developing significant new ports, and so forth. The marine industry of the nation is closely tied to trade activity. As commerce diversifies and expands, demand for its ports and trade infrastructure will only increase, providing strong justification for the quick and effective growth of port sector.

Depending upon the port type, the sea port segment is the dominant player and is anticipated to have the biggest impact on port infrastructure market.  As a result of expanding global trade, there is a growing desire for better global connection via waterways, both for passenger transit and freight shipping. Through the use of sea ports, massive amounts of cargo may be transported across continents. Hence, this segment is expected to grow. Sea ports are essential to economic activity, particularly in coastal regions. The demand for appropriate and enhanced port infrastructure has grown dramatically as a result of an annual increase in the throughput of passengers travelling by sea and goods transport. This situation is anticipated to increase the market opportunity for port infrastructure worldwide. 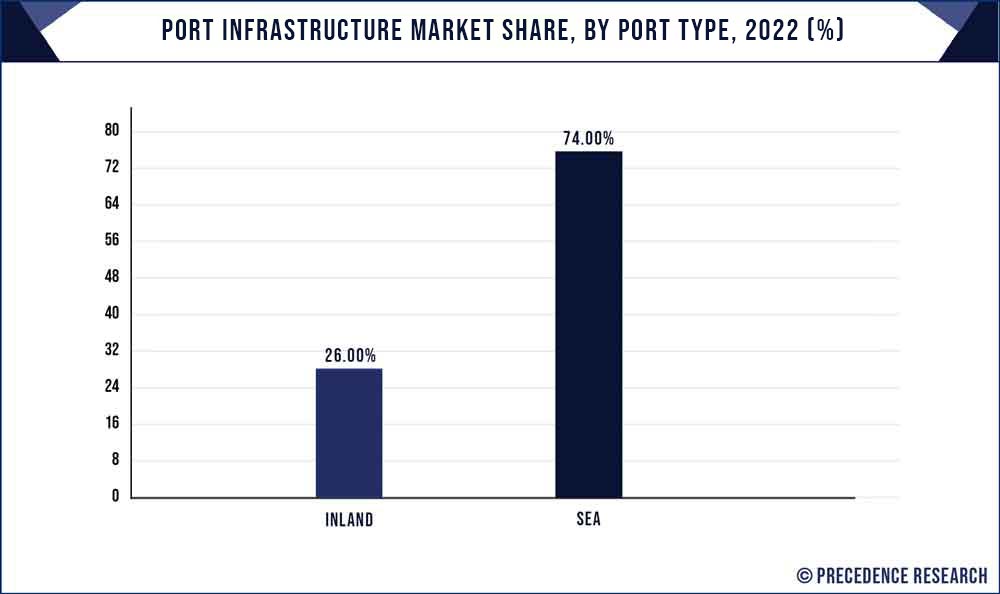 Superior logistics, the availability of huge buildings, near proximity to rail and highways, plenty of truck parking, less congested traffic, and financial incentives are all provided by inland ports. Speed to market with finished goods and the most affordable shipping are more important than ever in today's new global economy.

During the projected period, the cargo segment is anticipated to be the largest in the port infrastructure market. The cargo market is predicted to grow dramatically as a result of growing global trade and extended supply chains. More cargo shipping is used when the volume of exports and imports between continents rises. There is a huge need for cargo transportation, particularly for heavy load items, as equipment parts and final goods delivery are moved over rivers on a significant scale. Due to the increased shipping of various items around the world, the demand for cargo has increased in recent years due to the growth of e-commerce. Most of the trades and transportation are of cargo type due to its necessity. Hence, this segment is expected to be the largest. 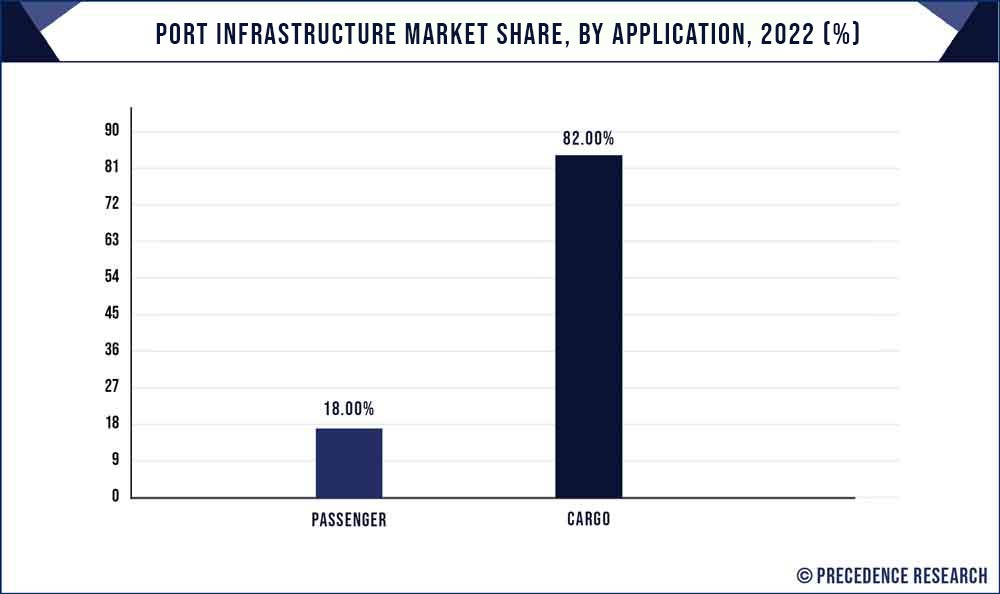 The most crucial elements in any trade are the form of transportation and the distance. Low-cost transportation enhances business operations by minimizing traffic and congestion, saving time, and transporting heavier cargo. Marine commerce operations are becoming more and more well-liked on a global scale as a result of this advantage over other modes of transportation. Passengers have been effected by the pandemic and almost half of the passengers have decreased post pandemic in almost every part of the globe.

The dominant position in the port infrastructure industry belongs to North America. The existence of ports that make a substantial contribution to regional trading operations is the primary driver fueling the market's expansion in the North American region. U.S. and Canada are the countries with most important ports that connect North America to the rest of the world. All the major transactions and transportation activities makes this region in a dominant position.

Asia-Pacific is considered as fastest growing region. The ship port infrastructure market is anticipated to grow at the quickest rate during the projected period in the Asia Pacific region. India and China, two rapidly developing economic giants, as well as many Southeast Asian economies and their expanding maritime trade operations, will all make a substantial contribution to the market's regional expansion. Similar to India, this maritime transport is used for more than 95% of India's trade in terms of volume and 70% of trade in terms of value. The development of the market in this region will be aided by several government-supported initiatives and policies in the neighboring nations. Moreover, China, Japan, and India, three of the largest economies in South Asia, are boosting their investments in infrastructure to expand their influence in the Indian Ocean and get access to resources and prospective high-growth markets in the Middle East and Central Asia. For the region's port infrastructure industry, the development plans for the Sagarmala project in India and the deep-sea Angola port in China, respectively, would serve as prospective growth platforms. However, the presence of antiquated and frequently crowded docks in nations like India, Pakistan, Myanmar, and Bangladesh has in turn led to a growth in economic activity in China and Japan, which have more modern maritime facilities.

The worldwide port infrastructure industry is predicted to have highly lucrative growth due to increased regional competition among nations with extensive coasts, particularly in Asia Pacific.

Over the course of the projected period, there will be tremendous development potential due to the expanding investments being made in Latin America to enhance transportation, support commodity exports, and meet local consumer demand. The region is distinguished by the presence of 15 terminals and 92 anchorages, many of which require upgrading. As a result, the port infrastructure market in the area has great growth potential.