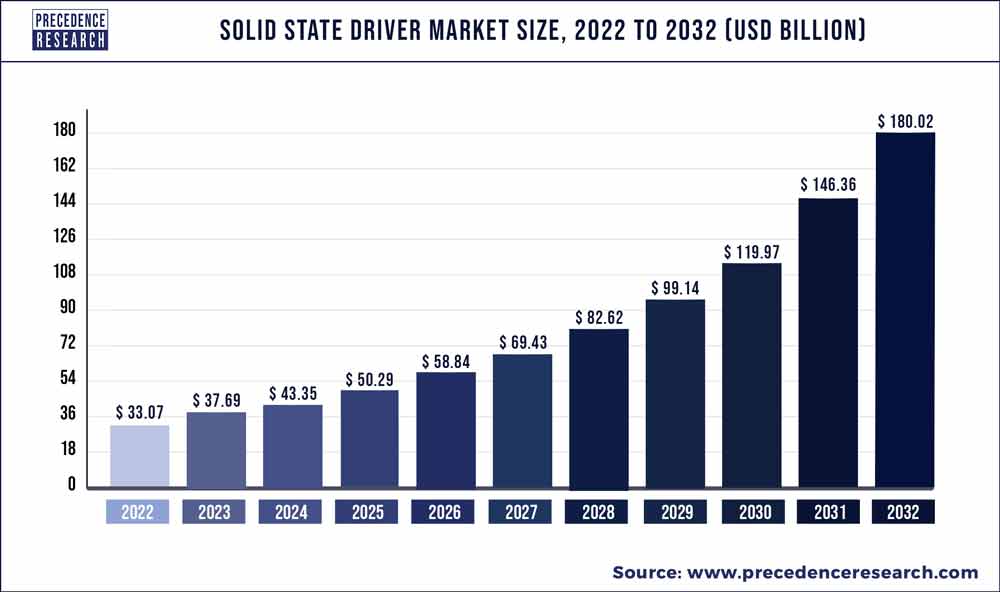 Cloud computing is gaining rapid traction among the consumers for preserving data. Various individuals and business uses cloud computing. The availability of various variety of cloud platforms like classic private cloud, new public cloud, and personal cloud at homes there has been an upsurge in the demand for the solid state drives across the globe. Therefore, the rising adoption of cloud storage is expected to boost the growth of the global solid state drive market. Various technological upgrades like PCI Express SSDs in cloud computing is gaining traction rapidly owing to its high speed access to data. Therefore, the technological advancements in the solid state drives is fostering the market growth across the globe.

The rapid growth of various data-sensitive businesses such as medical sciences, financial services, and energy management is paving the way for the growth in the demand for the SSDs. These businesses are highly data-sensitive and latency may result in financial losses. Therefore, the high speed and quick access to data is the major feature that is expected to drive the global solid state drive market in the forthcoming years. The rising number of digital platforms are driving the demand for the SSDs. Big firms like Google uses SSDs owing to its advanced features.

Based on interface, the SATA segment dominated the global solid state drive market in 2020 accounting for more than 80% of the market share, in terms of revenue and is estimated to sustain its dominance during the forecast period. This is attributed to the low cost designing of the SATA interface which increases its adoption in various devices like laptops, data centers, and personal computers. Data Center companies are enhancing the reliability and performance of their existing systems with help of SATA interface, which is expected to provide opportunities in the upcoming future. 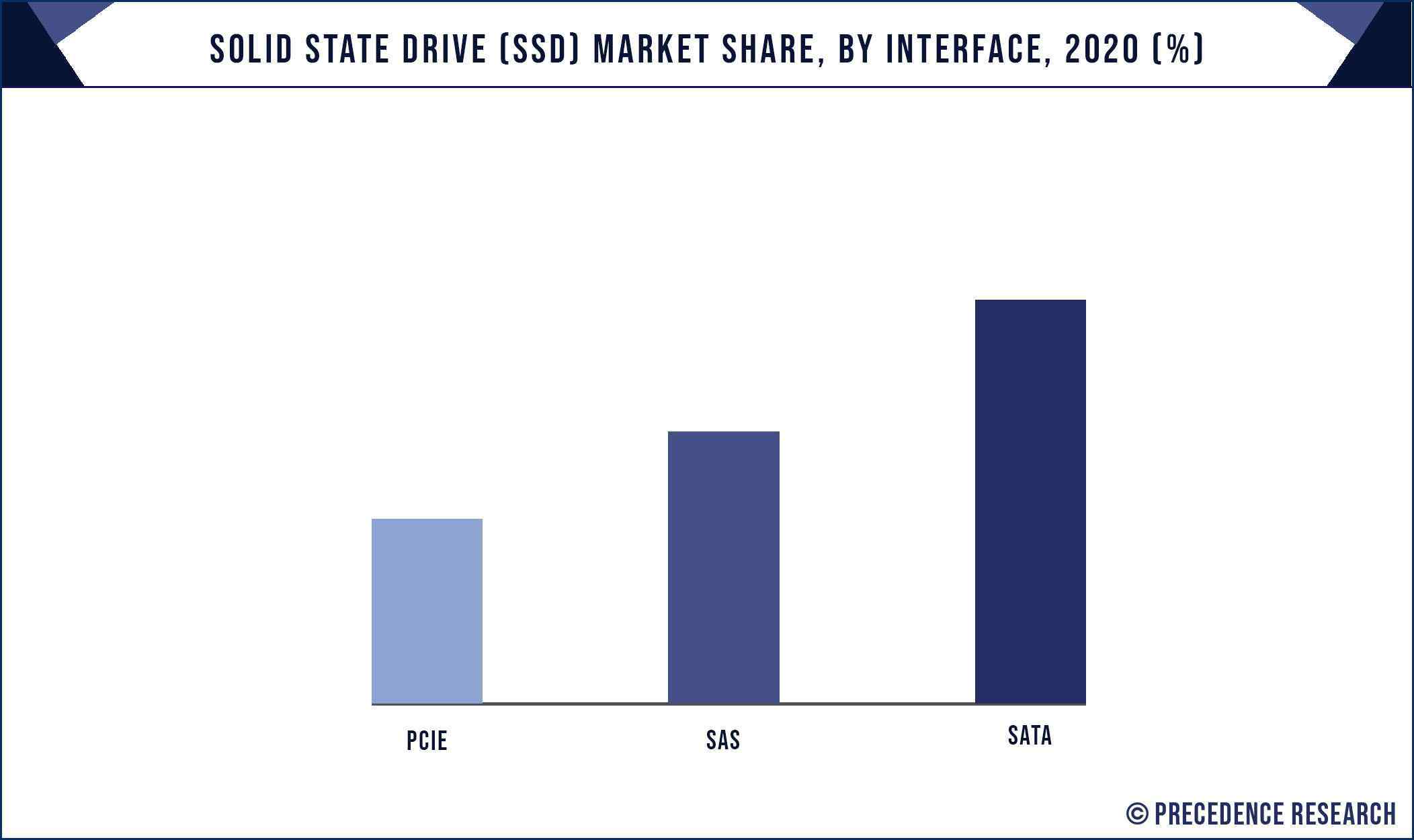 On the other hand, PCIe segment is estimated to be the fastest-growing segment during the forecast period. This is due to the rapidly growing cloud computing industry. The higher adoption of PCIe in the cloud computing owing to the high speed, good performance, and low latency of the PCIe. Therefore, this segment is expected to gain rapid traction in the forthcoming years.

Based on technology, the TLC segment dominated the global solid state drive market in 2020, in terms of revenue and is estimated to sustain its dominance during the forecast period. The constant research & developmental activities resulted in the development of cheaper technologies. The TLC technology is the cheapest technology as compared to any other technology. This cheap cost along with the enhanced performance has boosted the growth of this segment. Furthermore, the TLC is also estimated to be the fastest growing segment during the forecast period. This is due to the increasing adoption of TLC in various consumer electronics such as tablets, smartphones, and notebooks.

Based on application, the client segment dominated the global solid state drive market in 2020, in terms of revenue and is estimated to sustain its dominance during the forecast period. The requirement of high speed along with the large data storage capacity has boosted the growth of this segment. The rising adoption of advanced devices such as smartphones, laptops, and tablets have increased among the consumers. The rising adoption of smartphones for various purposes such as money transfer, gaming, social media, and various other online activities have boosted the penetration of smartphones across the globe, which in turn drives the growth of this segment. This trend is expected to sustain in future and hence this segment will remain dominant throughout the forecast period. 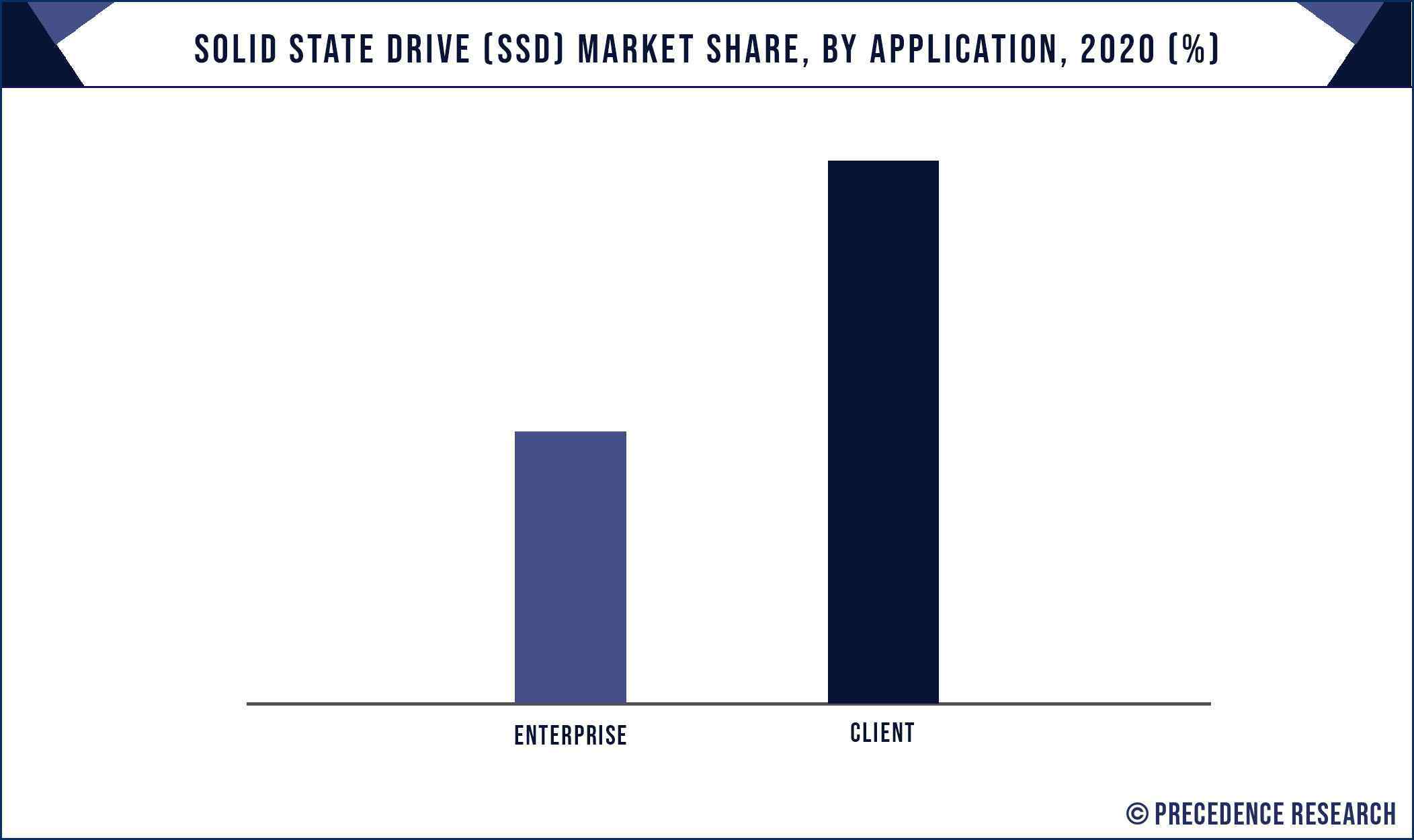 On the other hand, the enterprise segment is estimated to be the most opportunistic segment during the forecast period. This is attribute to the increased usage of SATA interface in large business laptops and desktops. Moreover, the development of 3D NAND, TLC, and MLC offers lower endurance offers lower cost and higher storage capacity that propels the growth of the enterprises segment. Further, various medium and small enterprises increasingly uses MLC because it offers longer life span as compare to the TLC and MLC is cheaper than SLC. Hence, the rising adoption of MLC in enterprises segment is boosting the segment growth.

Based on region, North America dominated the global solid state drive market in 2020, in terms of revenue and is estimated to sustain its dominance during the forecast period. This is attributed to the presence of leading players in the region that provides advanced SSDs to various industries across the region. The rising investments on the development of IT infrastructure in North America is the major factor accountable for the growth of the solid state drive market. Further, the region is characterized by increased penetration of higher quality cloud computing services. The proliferation of 5G technology in North America will result is a handsome growth rate of the SSD market during the forecast period. 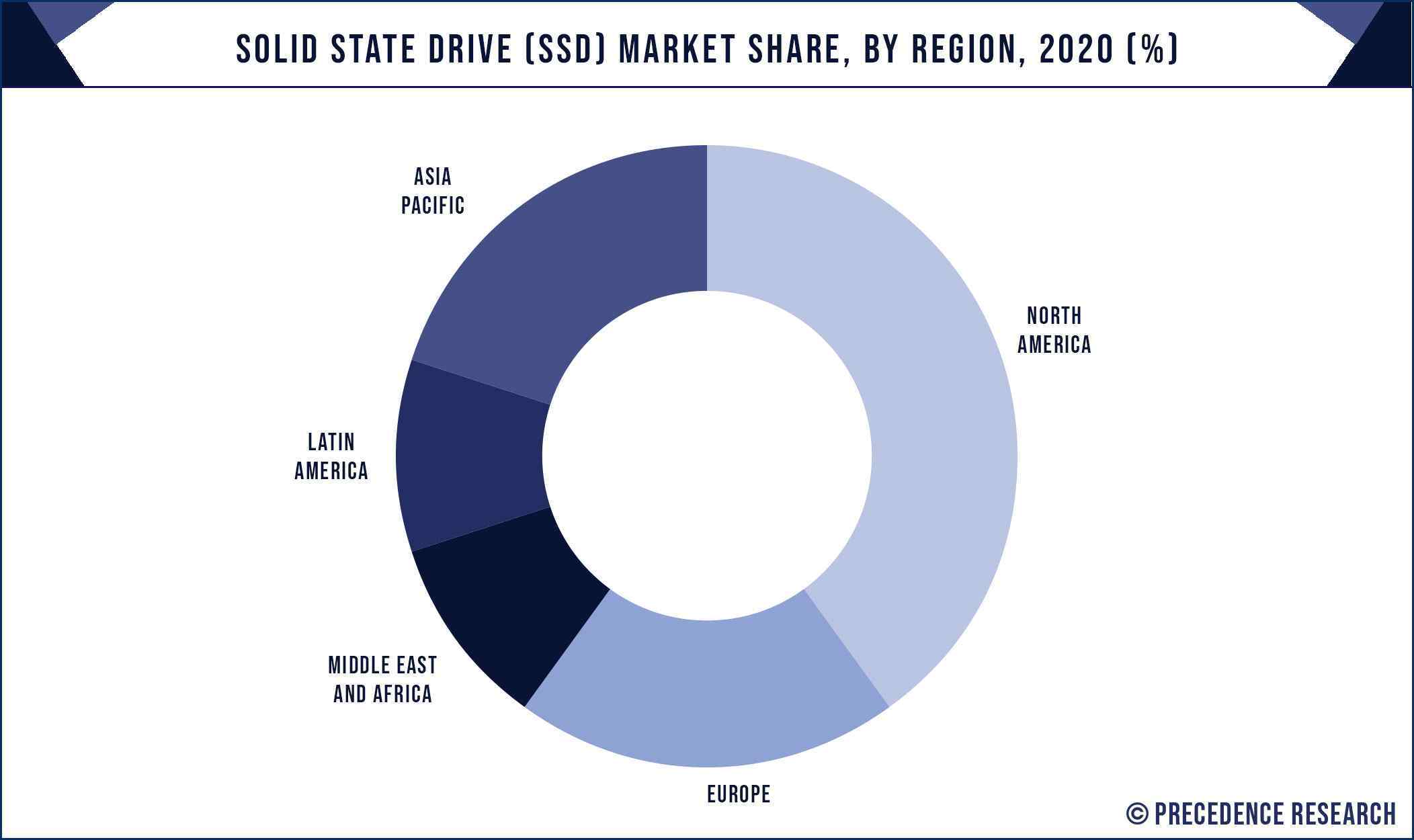 On the other hand, Europe is estimated to be the fastest-growing market during the forecast period. The rapid penetration of smart devices in the region, rising investment in the development of IT infrastructure, and rapid surge in the adoption of cloud computing is augmenting the demand for the solid state drives in European markets.

The market is moderately fragmented with the presence of several local companies. These market players are striving to gain higher market share by adopting strategies, such as investments, partnerships, and acquisitions & mergers. Companies are also spending on the development of improvedservices. Moreover, they are also focusing on maintaining competitive pricing.

In April 2021, Samsung launched PM1653, which is claimed to be the first 24G SAS Solid State Drive made with V-NAND memory chips.

Some of the prominent players in the global solid state drive market include: