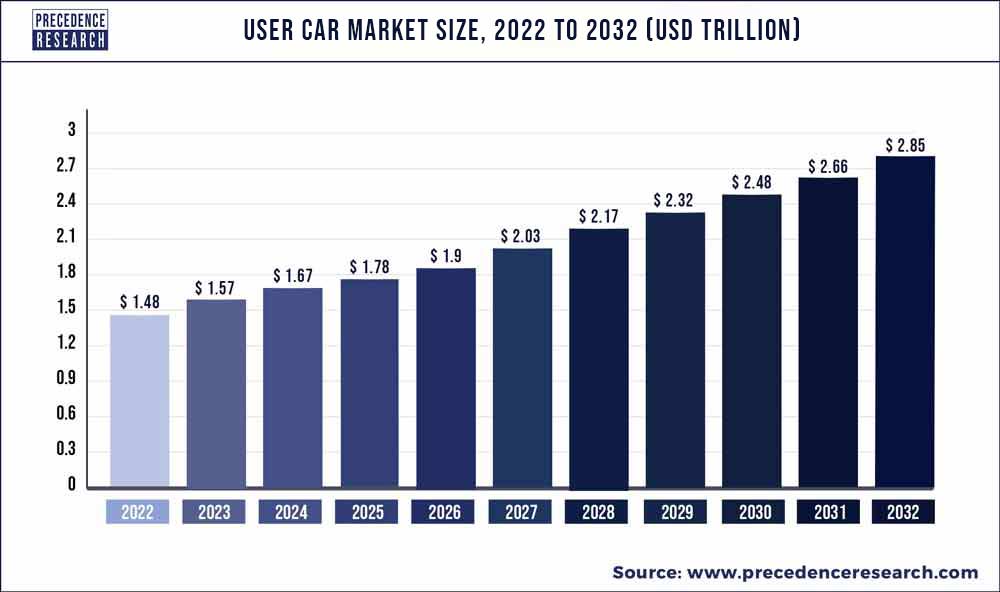 The shipment of used cars was recorded nearly 102.8 million units in the year 2019. The market growth for used cars witnessed significant growth during the past few years because of price competitiveness among new market players along with inability of significant share of customers to buy a new car. In addition, the market players in the used car market are strengthening their dealership network through he investment in different regions to grab major share of customers in that region and to establish their hold in the market. These dealership network help industry participants to establish their brand recognition as well as to make used car options viable mostly for the lower middle-class population.

Earlier, automotive manufacturers were mainly focused towards the new car production and sales, whereas now view used cars as a byproduct for their sales growth. However, increasing competition in the used car market has significantly surged the dealership networks. Moreover, an added advantage for high reliability and quality of the used vehicles has upended the customer perspective towards used passenger cars and thus propels the market growth for used cars during the forthcoming years.

The COVID-19 pandemic has disrupted the sales and operation of the automotive industry to a larger extent. With the disruption in the industry, the sale of used cars was also affected. However, in the post-effect of coronavirus disease, customers are likely to prefer private vehicles in respect to shared ones. This in turn anticipated to proliferate the market growth for used car during the forecast period.

The conventional vehicle type segment dominated the global used car market accounting for a revenue share of more than 45.5% in the year 2020 and estimated to exhibit significant growth over the forthcoming years. The prominent share of the segment is mainly attributed to its large inventory that offers large number of choices for the customer at an affordable price. In addition, the conventional vehicles cover maximum share in all sizes of vehicles that include mid-size, compact, and SUVs. 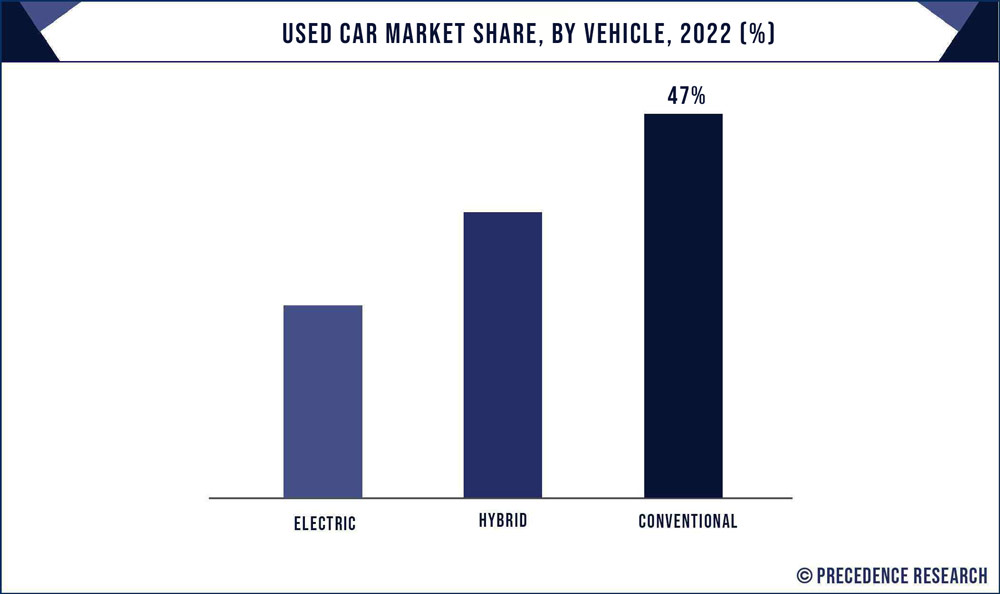 The electric vehicle witnessed the fastest growth rate due to shifting customer preference from conventional vehicles to electric-powered vehicles.

The organized vendor type segment registered the fastest growth and accounted to hold more than two-thirdsof the total market revenue over the analysis period owing to new retail model as well as significant amount of entry of new players favor the market growth of organized vendor segment.

The petrol fuel type accounted to register the largest revenue share of nearly 45% in the year 2020 and expected to witness a stagnant growth over the forecast period. This is primarily because of declining usage of diesel-based vehicles. In addition, the government of various regions has issued stringent regulations for the diesel-powered vehicles, this triggers the market growth for alternate fuel sources.

Based on size, the global used car market is classified into mid-size, compact, and SUVs. The compact size held the majority of revenue share accounting for approximately 43% in the year 2020 because of increasing preference of customers towards compact and economical vehicles. 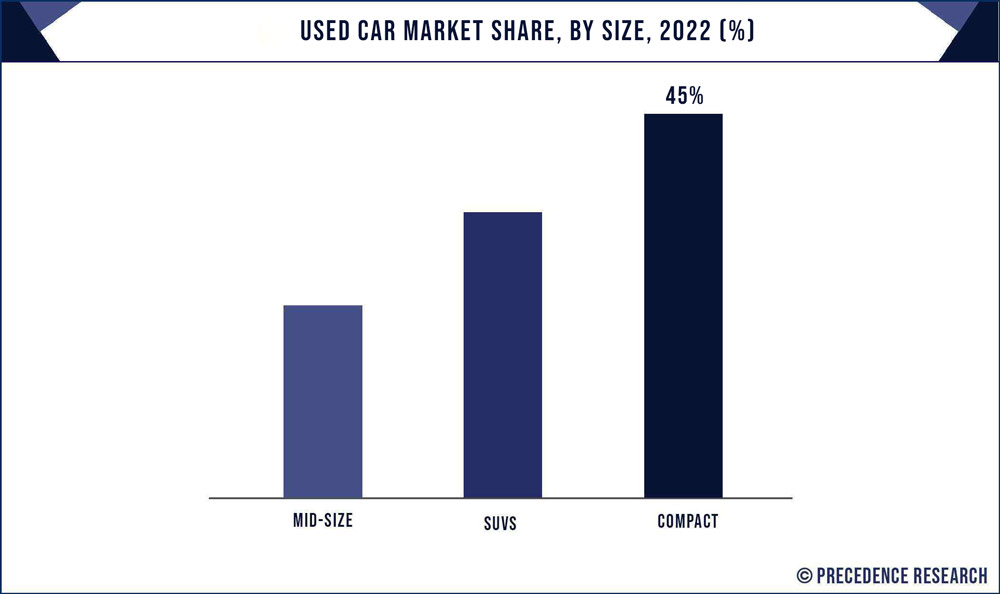 On the other hand, SUVs have shown downfall in their sale owing to changing landscape in the automobile industry. Nonetheless, with the advancements in SUVs, the segment likely to witness an upsurge during the forthcoming years.

Offline sales channel accounted to hold majority of revenue share of nearly 78% in the year 2020 and anticipated to continue its dominance during the forecast time frame. This is mainly attributed to the high consumer preference for conventional mode of purchasing. In addition, the offline sales also offer higher consumer satisfaction. However, shifting trend for online purchasing has also triggered the online sales of used cars. Further, the rising penetration of internet in developing and under-developed nations anticipated to favor the growth of online sales channel.

The Asia Pacific is the global leader in the used car market and accounted to held more than 36.3% revenue share in the year 2020. This is primarily attributed to the increasing demand for used cars in developing countries such as China, India, South Korea, and many others. 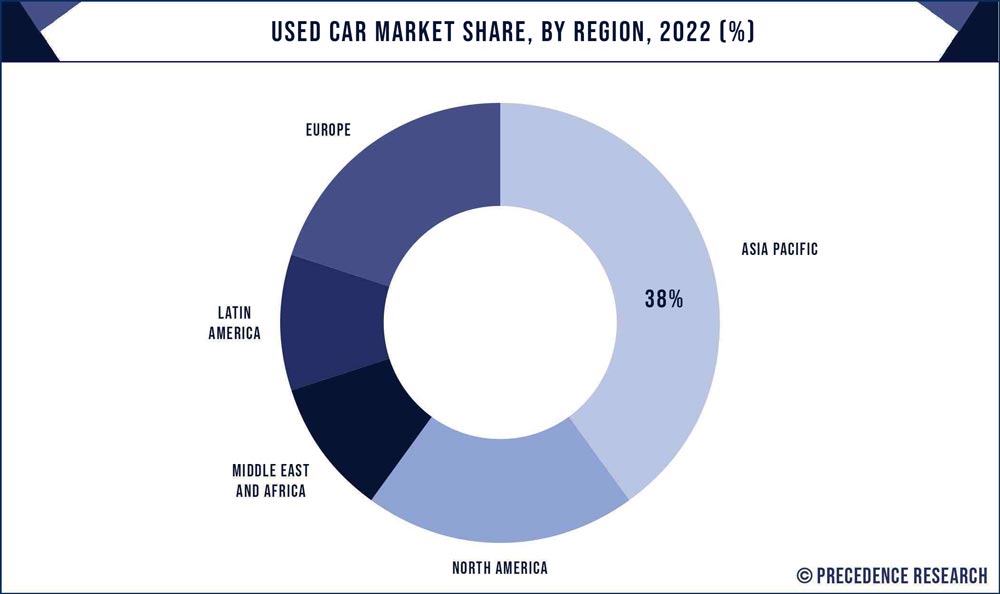 Meanwhile, North America also accounted to hold prominent revenue share in the global used car market because of plummeted growth during the past few years. However, the Asia Pacific anticipated to witness the highest growth over the forecast period.

The global market for used car is highly competitive as the leading industry platers are highly focused towards expanding their consumer base to gain significant competitive edge in the market. Hence, vendors adopt various inorganic growth strategies such as merger & acquisitions, collaborations, strategic alliances, and many others. For instance, in the year 2020, Volkswagen announced to invest in the market through collaborating with its own used car chain i.e. Das WeltAuto to expand its reach in the market and gain higher degree of competitive advantage on the global scale.