The involvement of modern technology into the various systems all over the world has helped the market for anti-drone to record a considerable revenue over the period of time which is expected to grow further. The outbreak of the pandemic had a considerable impact on the market owing to the decline in the demand from the industries that utilize such services. The restrictions imposed by the government hampered the demand and supply to a great extent which had experienced minor purchases from the regions of Africa and Middle East.

The factor of security conservation has emerged as a substantial reason for the growth of the market owing to the identification and discovery of anti-drones. The incidence of violation of public safety have rapidly increased over the period of time which has resulted from the usage of such advanced devices.

Professional photographers are making use of drones which are accompanied by integrated cameras that help to capture sufficiently clear photograph from the top. The high-quality pictures which are produced with the help of these integrated cameras encourages various professionals to make use of these drones on a large scale. The government has been challenged a number of times as the usage of unmanned aerial vehicles hampers the security of various sectors which are not easily accessible to the common people. The increasing acceptance which has been observed among the people for the usage of unmanned aerial vehicles has emerged as a major concern for the government in almost every country.

Report Scope of the Anti-Drone Market

On the basis of mitigation type, a segment of destructive system has emerged as the largest segment owing to the huge budget that is assigned to this particular sector. A huge share of the total budget is dedicated for the development of this particular sector which makes it a leading competitor among the other segments in the market. a subsegment under this category is the segment of laser system which accounts for the largest share in the current market which helps the market to record a considerable revenue over the period of time. This segment mainly deals with the machines that help to destroy the important parts of a drone which makes it unstable and damages the frame with the help of force. The electro-optical sensors that are attached to the drones are destroyed with the help of low power lasers. In this way the unmanned aerial vehicle is disrupted by destroying the essential parts with the help of lasers. 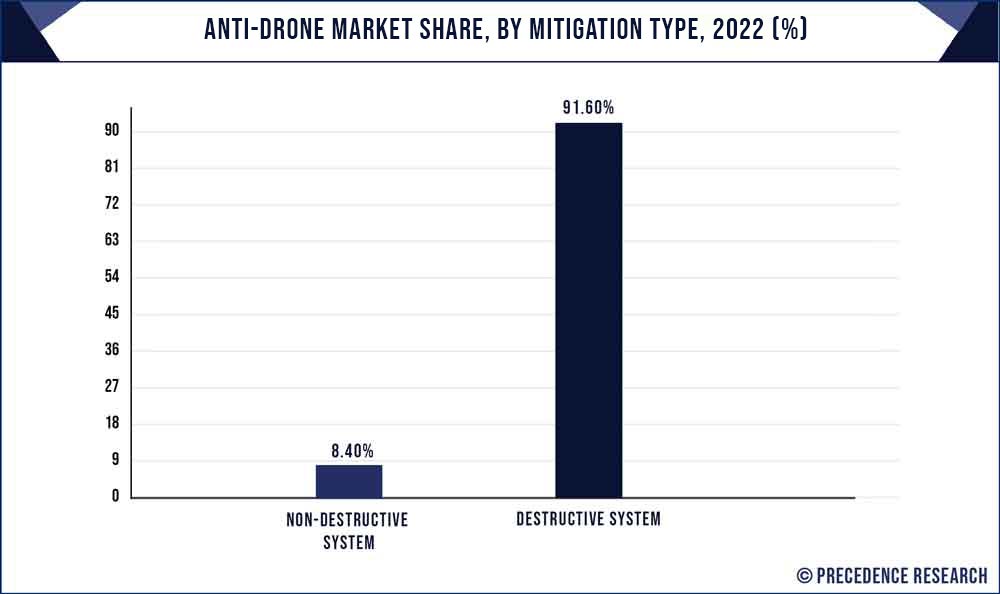 The segment of electronic countermeasures is also growing rapidly owing to the recent advancements that have taken place in the field of drone technology which has introduced many machines that are smaller in size and lighter in weight. The market will be benefited tremendously with the usage of compact counter drone technology which is expected to boost the size of the market during the forecast period. Strong magnetic signals are transmitted with the help of electromagnetic weapons and powerful microwave that help to provide maximum resistance against the unmanned aerial vehicles. Signal blocks have been introduced by many companies which hampers the data transfer that takes place between the device and the operator which emerges as a major growth factor for the anti-drone market during the forecast period.

On the basis of defense type, the segment of detection and disruption has emerged as the largest segment owing to its larger share in the global market. The forecast period is expected to be dominated by this particular segment. The unmanned aerial vehicles are detected, classified, identified with the help of detection and disruption devices and systems which helped to provide maximum protection against unauthorized entries. The unauthorized drones can be neutralized with the help of this machine after the detection, classification and identification of the particular device. The defense forces mainly make use of these machines and technologies which help them to provide maximum security against unauthorized entry of drones in the restricted areas and bases. The potential attacks can be avoided with the help of these systems as it monitors the entry and exit of each and every drone spotted in the premises. The facility of identification becomes very important as it is necessary to distinguish between other aerial objects such as birds and airplanes which needs to be protected from the blocking system. 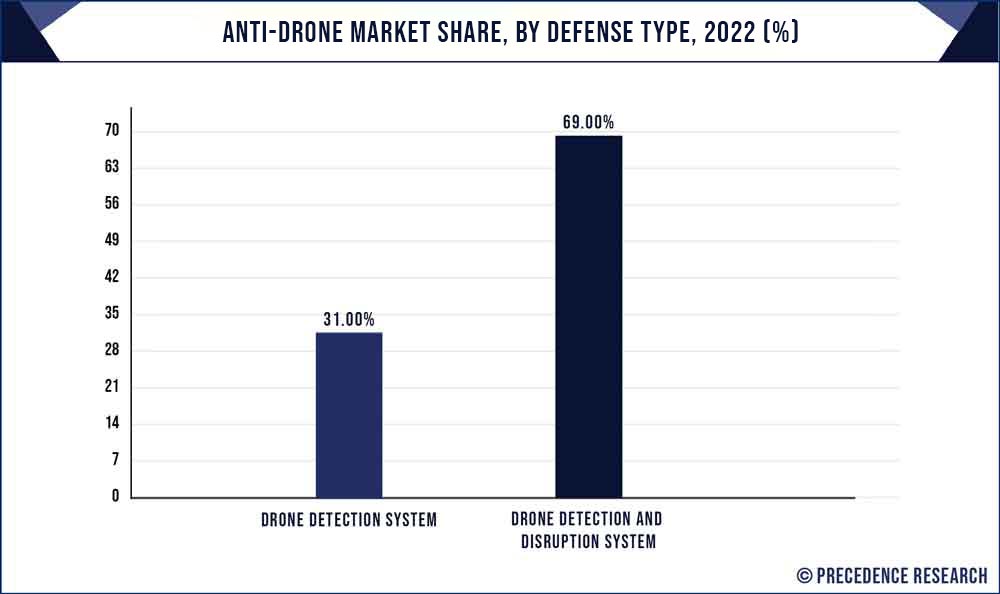 The deployment of the countermeasures needs to be monitored for protecting and distinguishing the birds and airplanes from the other unidentified drones. The segment of detection system is expected to record a considerable revenue over the period of time owing to the rapid improvements in the technology which has taken place. The technology of radar reflectance is utilized for identifying and detecting the unmanned aerial vehicles. The magnetic field of a particular drone is taken into consideration for identifying the unknown devices. Electromagnetic emissions are also taken into consideration for distinguishing the drones from the other aerial objects.

On the basis of end user, the segment of military and defense has emerged as the leading segment owing to the huge consumption and utilization of such technologies in this particular field. The usage of anti-drone systems has been rapidly absorbed in this particular sector which deals with the national security of a country. The various terrorist activities and illegal operations have increased during the recent times which can be curtailed with the usage of advanced technologies such as anti-drone systems. Unlawful smuggling and crossing of border can also be detected with the use of these technologies that help to identify and distinguish between the various objects that are crossing the border.

The key market players are making consistent efforts through the research and development programs to introduce modern equipment and technologies into the market for boosting the demand of these machines among the potential consumers. The military forces make use of these anti drone technologies for protecting the country from invaders which emerges as an important growth factor for the market. In the segment of commercial sector has also emerged as one of the major contributors to the growth of the market owing to the increasing demand for advanced devices among the potential consumers such as airports has helped the market to record a considerable revenue.

On the basis of geography, the region of North America has emerged as the largest contributor for the anti-drone market owing to the huge demand of such advanced technologies in this particular sector from the defense and aviation department which are highly developed. The rapid increase of acceptance and adoption of advanced technologies such as drones by the defense sector in the United States has emerged as one of the major growth factors for the market which is expected to see a tremendous boost in the times to come. Various technologies are being tested on the airports in this particular region which is helping the market to experience a tremendous demand. The army of the United States along with the North Atlantic treaty organization makes use of these technologies on a large scale which helps to boost the market for this particular sector.

The Asia Pacific region has also contributed considerably for the development with a view to develop in the aviation and defense industry. The region of China and India have majorly contributed to the growth of the market in the recent years owing to the recent developments made in the defense sector.