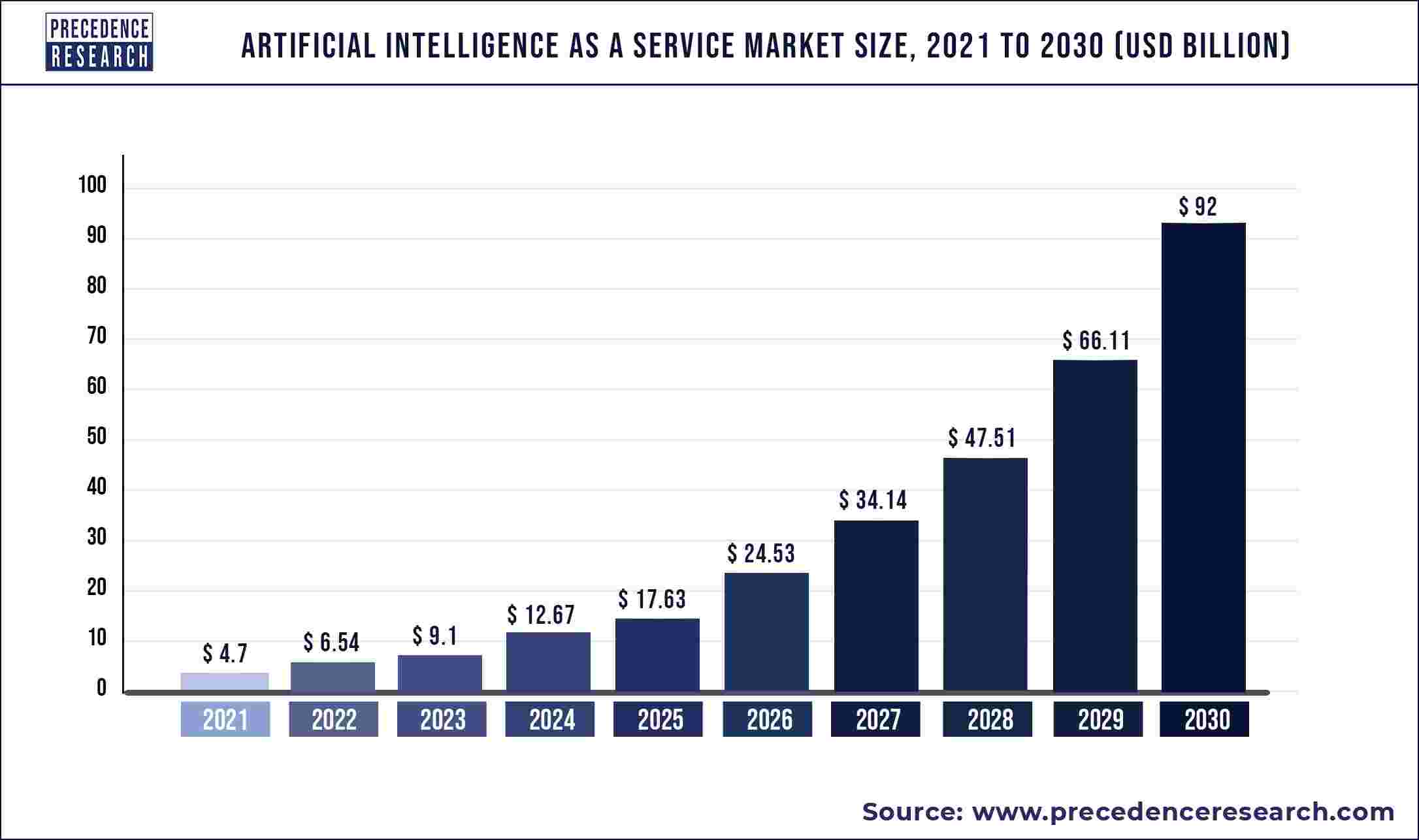 It is a third-party service that is outsourced by the companies in order to avoid the additional cost which imposes a pressure on the economy of the company. It mainly deals with the numerous services provided by the artificial intelligence which helps to reduce the human intervention and makes the work faster and more accurate without wasting much time. This helps to increase the productivity of the company and thus helps to increase the revenue return of the organization. Artificial intelligence as a service has been successful to capture the market by taking up the additional responsibilities of the company. The chances of human errors have been totally ruled out in the various fields in order to make the work faster and easier.

The companies are depending upon artificial intelligence for cloud learning in order to save time and energy and expect maximum output with minimum investment. The companies are able to experiment better with the offerings made by them. Cloud-based intelligence has experienced a high demand in the market along with multi-cloud functioning in order to save space and energy which in turn boosts the total revenue of the company.

The occurrence of the pandemic had a great impact on the growth of the market. Due to restricted movement the process of physical learning had suffered the greatest loss which was managed with the help of artificial intelligence in the form of machine learning. This technique was adopted by most of the institutions to continue the process and produce the expected output without loss of time. The businesses and companies implemented the use of artificial intelligence in order to achieve the targets and fulfill the duties which kept the revenue meter rotating. Artificial intelligence was also seeing to be used by the health care industry in booking appointments and ordering medicines for the elderly people by using applications which help them to receive the expected services easily. Artificial intelligence as a service is extensively used in the travel industry to deal with the bookings and cancellation processes which were rapidly done during the pandemic.

Neural networks are being used in order to maintain a huge amount of data and produce deep learning methods by including sound, text and photos which helps easy grasping with a view to produce maximum output. Artificial intelligence as a service has been used extensively in the aviation industry which deals with the climatic conditions in the interior as well as the exterior of the plane. This helps to automatically manage the climate conditions for the passengers. A similar experience is noticed in the automobile industry where the system of automatic climate control has been invented which provides a customized climatic condition inside the cabin of the vehicle. Artificial intelligence is complicated and hence require skilled labor force in order to manage the settings as per the user.

Absence of skilled labor force has proved to be a restraining factor for the market which can be obtained only after proper training and education of the employees. A huge amount of data is handled by the artificial intelligence so this is which helps to maintain accurate records and produce them when necessary. Due to the use of cloud based solution in different industries the market for global artificial intelligence as services expected to grow during the forecast period. The use of cloud computing has provided benefits in terms of reduced amount of cost invested and also better reliability. The use of cloud computing in the artificial intelligence as a service also benefits the organization as it eliminates the recruitment of the support teams for IT. There is also a growing demand for the services offered by various vendors in the form of subscription. These subscriptions help in providing cost benefit as the payment is made depending upon the use of the organization. All of these factors are expected to accelerate the demand for artificial intelligence as a service based on the cloud platform during the forecast period.

Report Scope of the Artificial intelligence as a Service Market

On the basis of technology, the market has been dominated by the machine learning systems which has automated the entire process of learning and teaching. This has mainly been put into use after the occurrence of the pandemic when institutions were closed as a result of strict lockdowns and restricted movement. In order to continue the process of learning, machine learning was considered as an option which helped to keep the system running without halt. This has now been adopted as a permanent system of learning in certain sectors globally. The segment is further discussed under computer vision and natural language processing techniques which have also shown considerable growth in the market. The use of technology in the day-to-day processes have automated the system to a great extent.

On the basis of the size of the organization the small and medium businesses have shown a tremendous growth and dominated the segment presently. These businesses have made use of artificial intelligence as a service in order to reduce the total expense which has to be invested behind production and hence have supported the market growth tremendously. This is followed by the large enterprises which have also made use of artificial intelligence as a service but due to the presence of a large number of employees the system is still slightly dependent on human labor.

On the basis of vertical, the BSFI industry dominates the market which has adopted artificial intelligence in order to boost the operational efficiency of the system and thus attract the potential consumers by offering them a rich experience. It is seen to be on a rapid developmental and innovative process which is expected to continue further during the forecast period. It is mainly used in the algorithm trading and banking sector which detects frauds for the financial services. A flawless assessment is provided by the artificial intelligence which helps to keep the business crystal clear.

The segment further consists of the IT and telecom sector which have shown amazing results by presenting a constant growth in the market. The energy sector along with the utility services have also contributed considerably to the market with the increasing demand. Public sector has made use of artificial intelligence as a service to a great extent in order to provide better facilities and services to a large population. Health care and manufacturing sectors are the next in the segment which have made use of artificial intelligence to maintain huge data and information in order to avoid confusion and provide a proper service to the masses.

On the basis of geography, the North American market has dominated the segment as a result of the rapid development in this region. Artificial intelligence has experienced a great response in this region which has made its place in almost every sector and thus automated the processes. The Asia-Pacific region has also shown a tremendous growth owing to the rapid development of the IT sector. The Latin America and Middle East region have shown a significant impact on the growth of the market during the forecast period.

Segment covered in the report