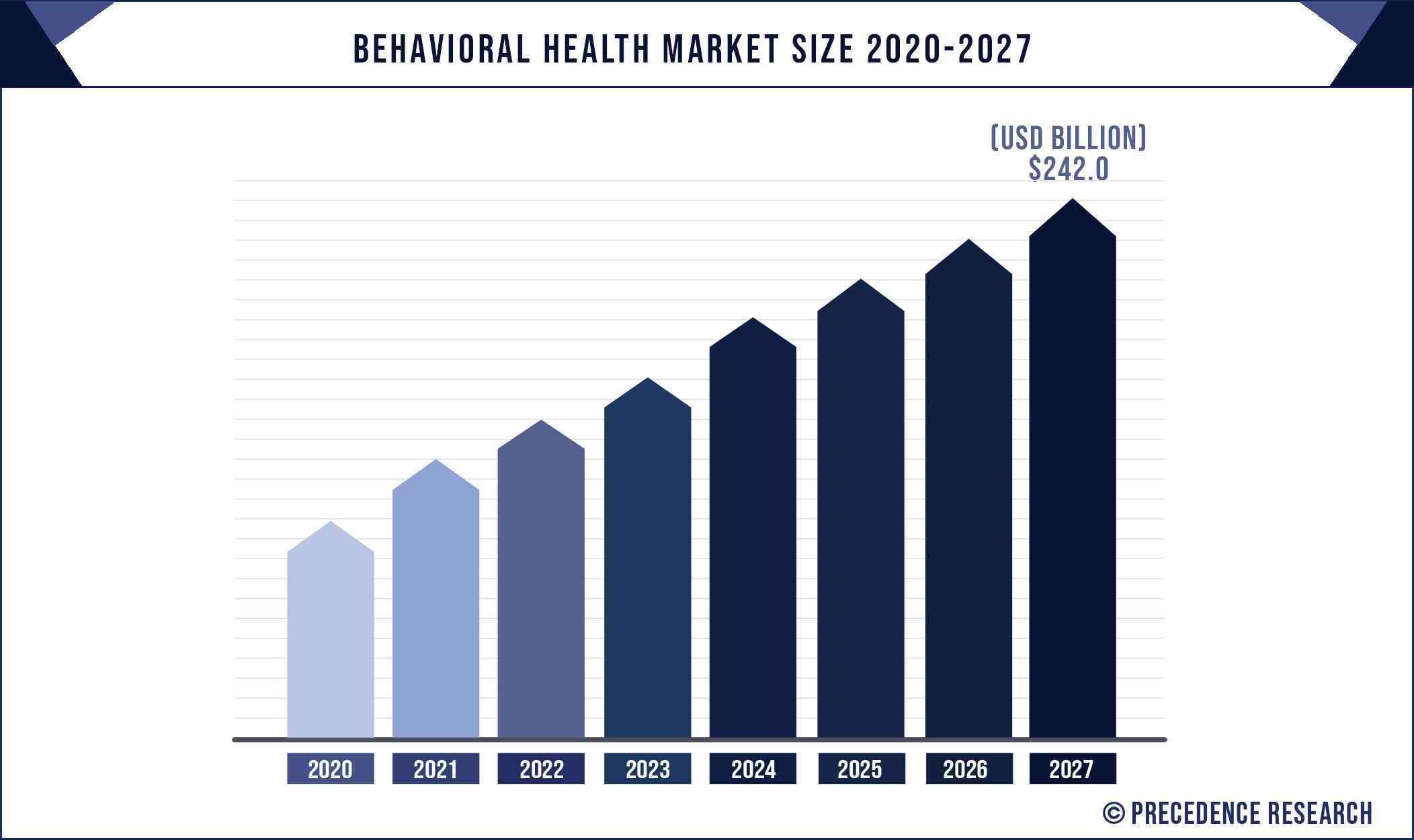 Human behavior is always being considered as one of the important indicators to judge the wellbeing of human society. Across the world, there is a continuous rising problems related to behavioral health disorders and it surge rapidly which leads to increasing the demand for behavioural health products. The major factor promoting the growth of the market is due to increasing self-awareness followed by increasing per-capita healthcare expenditures. Easy availability of expert in urban region is also the cause of growth in the segment. Furthermore, social acceptance in the society also promotes the individuals to come up and openly discuss the behavioural issue. Technological innovation like Cognitive Data collection and Artificial intelligence helps the physician to provide targeted therapy to the patients suffering from behavioural disorders.

Rising investment in technological advancement is the major clue for the treatment of behavioral health in the future. The rapid penetration of the various activity related application which helps in the collection of the behavioral issues of the patients. Mobile devices like smart phones, tablets, and others are constantly providing information to the doctors and researchers to increase the understanding of the mental well beings.

Despite a heavy surge in behavioral health, some of the major factor which restricts the growth the market includes the discontinuation of the treatment followed by a lack of trained professionals across the world. Lack of the penetration of the technologies in the various populated countries like India, China, and Indonesia is also considered one of the major factors which limits the growth of the market.

Mental health problems affects 1 in 5 individual across the globe. According to the World Health Organization, in 2020, over 264 million people suffered from depression which included people from all age groups. Depression is one of the major contributors to the global burden of diseases. The rising prevalence of depression and other mental illnesses, growing geriatric population, and increasing awareness regarding mental health among the population is prominently driving the growth of the global mental health market. According to the United Nations, the geriatric population across the globe is estimated to reach at 2 billion by 2050. Furthermore, rising depression cases is resulting in the growth in the number of suicides. Depression is a major cause of suicide. It is estimated that around 60% of individuals who commits suicide had a mood disorder. According to the World Health Organization, more than 700,000 people dies by committing suicide every year. Therefore, the growing incidences of depression and suicide are fueling the growth of the global behavioral health market.

The rising government initiatives and investments in deploying digital technologies in the healthcare sector to increase the quality of patient care services, improve operational efficiency, and reduce healthcare costs is expected to drive the growth of the behavioral health market. Furthermore, considerable growth in the number of mental health awareness programs conducted by various profit and non-profit organizations is contributing positively towards the market growth. The rising consumption of alcohol and rising prevalence of substance abuse is increasing the cases of mental health disorders across the globe. The increasing penetration of mental hospitals, rising investments on the development of healthcare infrastructure, and deployment of smart and digital technologies in the healthcare sector is estimated to drive the market growth during the forecast period. The availability of home-based services is expected to spur the demand for the mental health services at home, which is expected to be an important market driver in the forthcoming years.

Depending on the service, the inpatient services segment dominated the global mental health market in 2020. The longer stays in the hospitals generates higher amount of revenues for the hospitals. Inpatient services are the primary source of revenue for the hospitals. The average length of stays are for 10 to 13 days. Patients with serious mental illness stays longer and their chances of re-admission is also higher. Thus, the high potential of revenue generation is associated with the inpatient segment, which has resulted in the dominance of this segment.

Based on the disorder, the depression & anxiety segment dominated the global mental health market in 2020. The increased prevalence of depression among the population is supporting the growth of this segment. According to the World Health Organization, around 5% of the global adult population and around 5.7% of the geriatric population is suffering from depression. Therefore, the rising geriatric population is also expected to contribute towards the market growth as depression is higher in the elderly people. Furthermore, there is an interrelationship between the physical health and the mental health. The physical health problems can lead to mental health problems. Therefore, the rising prevalence of various chronic diseases is also estimated to have a positive impact on the growth of the depression segment. Anxiety is a kind of behavioural disorder characterized by excessive down emotions with nervousness, fear, and worry. A recent study has shown there is a huge spike in Anxiety patients in the last decades. These patients also shown the symptoms of panic attacks, OCD(obsessed thoughts), and post-traumatic disorders.

On the other hand, the substance abuse disorders is estimated to be the most opportunistic segment during the forecast period. This is attributed to the rising prevalence of drug abuse or substance abuse amongst the young population in the developed and the developing nations. According to the World Health Organization, over 180,000 deaths were directly linked to the drug use disorders in 2019, across the globe.

Depending on end-users the global behavioural health market is categorized into outpatient clinics, rehabilitation centers, hospitals (emergency), and homecare settings. The outpatient clinics is predicted to occupy the largest market share in the year 2020 and will uphold this trend within the forecast year. Rapid technological advancement and the penetration of the internet are considered the mark key for both self as well as for creating awareness across the world.

Behavioral health becomes an important aspect of global studies. North America does the most quality studies related to behavioral health and its impact on society. United States also proved to be quicker acceptance and implication of the technological advanced products. As per the WHO, it is found that costs for the treatment for the behavioral disorders prove to be much higher compared to the other major chronic condition. As per the study, it is also concluded that around 36% of the U.S. population suffering from some kind of mental disorder in their lifetime. A rising percentage of the geriatric population in Europe is also considered as a major concern that promotes the growth of mental disorders. North America was the dominating behavioral health market in 2020. The increased prevalence of various mental health problems in US has resulted in the dominance of North America in the global mental health market. According to the National Center for Health Statistics, suicide rate has increased by around 35% from 1999 to 2018. Suicide is a result of depression & anxiety and suicide is the tenth-leading cause of death in the US. Moreover, the rising cases of substance abuse in US is also contributing exponentially towards the market growth. According to the Substance Abuse and Mental Health Services Administration (SAMHSA), every 1 in 4 individual in US has substance use disorder. According to the National Center for Drug Abuse Statistics, around 31.9 million people in US use illegal drugs and around 8.1 million of them have a drug use disorder. The presence of developed healthcare infrastructure in the region, increased awareness regarding mental health, improved access to mental health services, higher healthcare expenditure, and increasing geriatric population are some of the prominent factors that drives the growth of the North America behavioral health market.

Asia Pacific is estimated to be the fastest-growing market during the forecast period. Asia Pacific is witnessing rising cases of mental health disorders owing to the rising cases of physical health illnesses and disability and rising consumption of illicit drugs. The presence of huge youth population coupled with rising consumption of alcohol and substance abuse. The rising prevalence of depression is resulting in the rising number of suicide cases. According to the World Health Organization, around 77% of the global suicide incidences occur in low and middle income countries. Furthermore, the rising awareness regarding mental health and growing investments in the development of healthcare infrastructure in the region is expected to boost the behavioral health market growth in Asia Pacific. A large pool of population exists in Asia pacific, with rapid economical development followed by increasing per-capita healthcare expenditure considered as one of the major driving factors for the growth of the behavioral health market.

Some of the significant players in the behavioral health market include:

This research report estimates revenue growth at global, regional, and country levels and offers an analysis of present industry trends in every sub-segment from 2016 to 2027.This research study analyzes market thoroughly by classifying global Behavioural Health market report on the basis of different parameters including type of service, disorder, end-user and region: 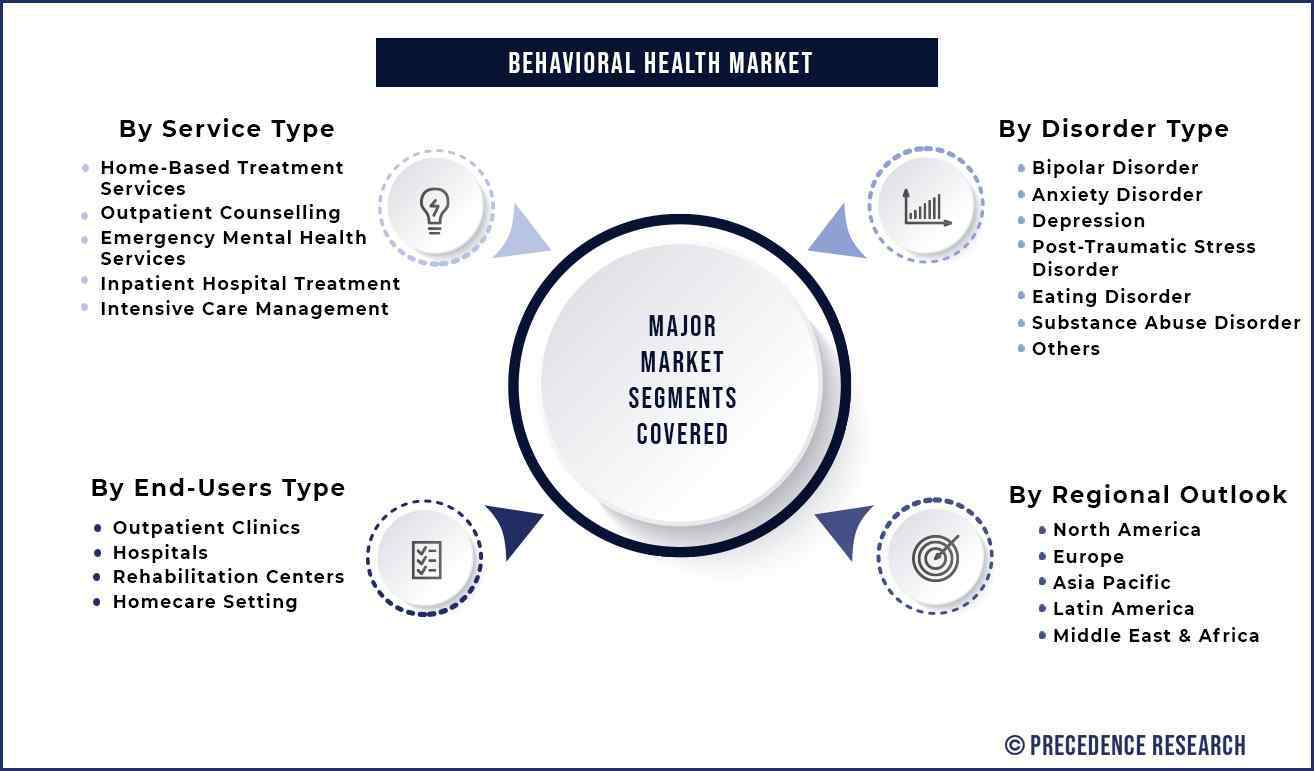