According to Precedence Research, the global biofuels market was valued at US$ 109.96 billion in 2021 and is predicted to reach US$ 201.21 billion by 2030, with a CAGR of 8.3% during the forecast period 2021 to 2030. Growing demand as environment-friendly fuel in road transportation, Rising awareness about use of renewables and rising focus on lowering greenhouse gas emission are major growth driver of biofuels market. 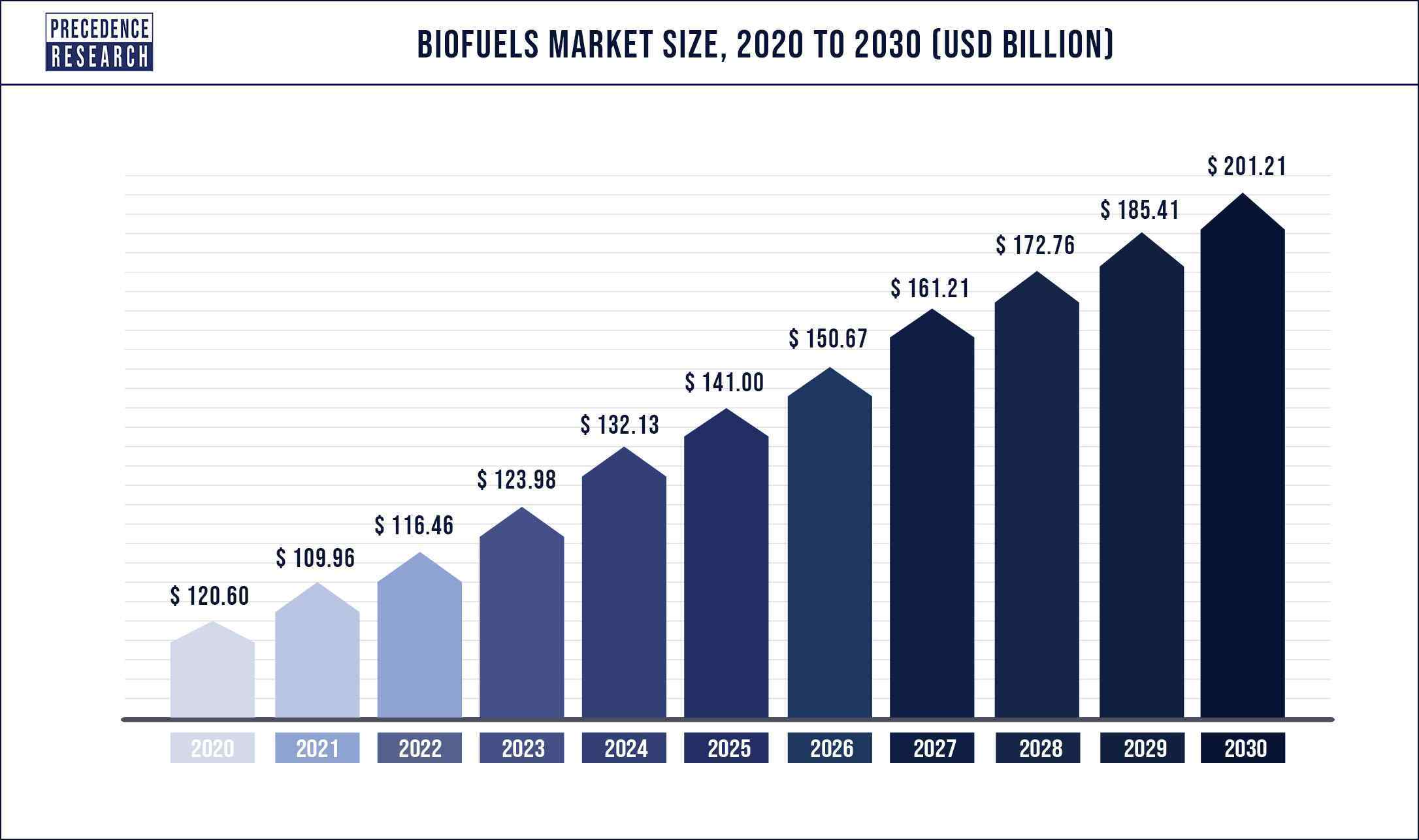 Emerging applications of the biofuels are projected to generate lucrative growth opportunities for the major players operating in the global biofuel market. Biofuels are going to use as affordable and reliable jet fuels. The biofuels researchers and scientists have discovered production method which helps to produce jet fuel easily from the biomass. Further, technological advancements in the biofuel industry have reduced the cost of the biofuels which is among major factors used to replace the use of fossil fuels. In addition to this the introduction of newer feedstock for the production of the biofuels is another factor expected to support growth of the target industry in the near future. Also, emerging countries across the globe are focusing on increasing biofuel production in order to reduce GHG emission is creating opportunities in the target sector.

Decreased investments in the biofuels sector

In 2019, investments in liquid biofuels production capacity fell by roughly 30%, owing mostly to changes in China, where ethanol production facility investments were half compared to the previous year. To limit rivalry for maize production and ensure food security, China has put a stop to the extension of its 10% ethanol blending mandate across the country. Because 10% blending is still being implemented in some new provinces, investment in China could pick up in 2020, bolstered by new facilities already under construction.

One of the world's most essential energy sources is petroleum oil. More than 70% of all petroleum fuel is used in the transportation industry. Because of the rapid increase in petroleum use, it is predicted that the world would run out of petroleum oil by 2070–2080. Due to greenhouse gas emissions (GHG), which include CO2 and other harmful gases including methane, carbon monoxide, and chlorofluorocarbons, its overuse has raised worries about health and global warming. By 2040, greenhouse gas emissions are expected to reach over 43 billion metric tonnes. As a result, complementary power options that are easy to get, renewable, and availability are required.

Report Scope of the Biofuels Market

Ethanol segment recorded the prime market share in the global biofuels market by type in 2020. Rising use of ethanol as environment-friendly fuel in the automotive applications in order to lessen the global greenhouse gas emission is primary factor driving growth of the ethanol segment. Other factors such as increasing investment in research and development are projected to increase the usage of ethanol over the estimate period. Bioethanol's greater octane rating than ethanol-free gasoline raises the compression ratio of an engine, increasing thermal efficiency. Bioethanol fireplaces are also fueled with it. Because it is flueless and does not require a chimney, it is ideal for home use.

The biodiesel fuel type segment is predictable to rise at a noteworthy CAGR during the forecast time-frame due to new product launches in the near future. Biodiesel is a biodegradable, renewable fuel made in the United States from vegetable oils, animal fats, or restaurant grease. Biodiesel satisfies the Renewable Fuel Standard's biomass-based diesel and total advanced biofuel requirements. Renewable diesel, commonly known as "green diesel," is not the same as biodiesel.

Although ethanol output is substantially larger, biodiesel production has increased at a faster rate since 2010, more than tripling between 2010 and 2015. Biodiesel now accounts for around 3% of all diesel fuel sold. In today's gasoline, 10% ethanol is incorporated into the majority of the blends.

Sugar crop segment will expand at a significant CAGR during the forecast time-frame. Sugarcane produces 800 gallons of gasoline per acre, which is twice as much as maize. It would need 681,000 square kilometers to meet the United States' annual fuel requirement. Sugarcane's effectiveness over corn is aided by the fact that it produces sugar, which can be fermented directly. Corn primarily yields starch, which must be turned to sugar before being fermented to produce ethanol.

Some have suggested that sugarcane could provide the answer to the world's biofuel demands. Unfortunately, comments like "sugarcane is the most efficient biofuel feedstock in commercial use today" ignore land-use changes that have a significant negative impact on sugarcane's environmental profile. Rainforest is being cleared to plant sugarcane fields since the crop thrives in tropical climates. This means that large carbon debts are created long before any crop is grown and consumed.

North America is Estimated to be the Largest Market for Biofuels

The research report covers key trends and prospects of biofuels products across different geographical regions including North America, Europe, Asia-Pacific, Latin America, and Middle East and Africa. Geographically, biofuels market is conquered by North America owing to favorable government mandates for the biofuel production, coupled with the availability of abundant feedstock for the production of biofuels in the countries of this region, especially in the United States. 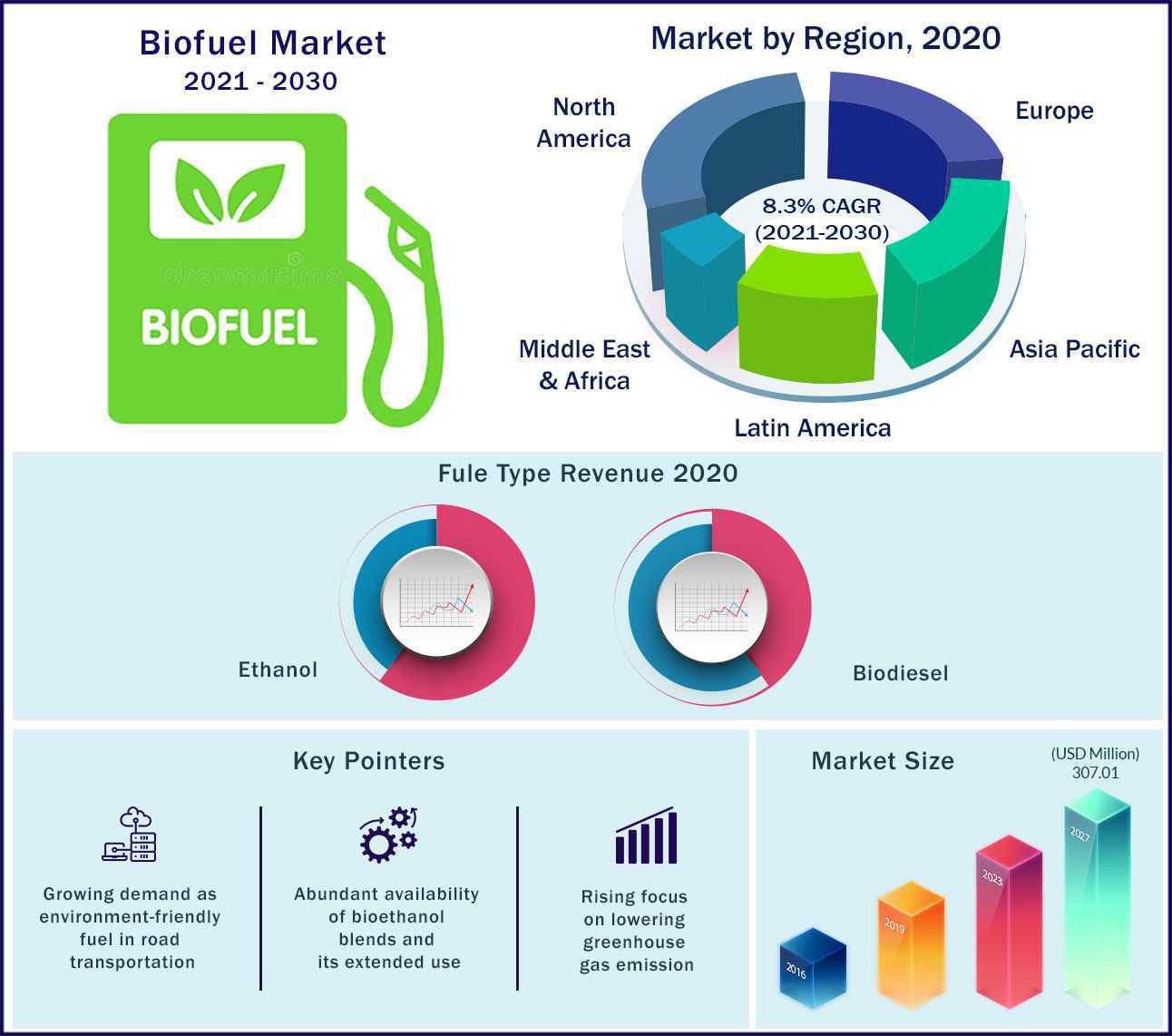 Asia-Pacific is anticipated to witness the rapid growth rate on account of increasing research and development investment by major market players and increasing awareness regarding use of renewables in the region. Also, growing focus on the application of the government regulations in order to reduce the green-house gases is another factor anticipated to propel growth of the target industry in the countries of the Asia Pacific.

In order to better recognize the current status of biofuels, and policies adopted by the foremost countries, Precedence Research predicted the future evolution of the biofuels market. This research study bids qualitative and quantitative insights on biofuels market and assessment of market size and growth trend for potential global market segments.

What is the current size of the global biofuels market?
According to Precedence Research, the biofuels market size valued at US$ 109.96 billion in 2021 and is expected to reach around US$ 201.21 billion by 2030.
What is the CAGR of biofuels market?
The biofuels market is expected to growing at a CAGR of 8.3% from 2021 to 2030.
What is biofuel?
Biofuel refers to the specific type of fuel derived from the natural sources such as plants, organic materials, animal wastes. Biofuel industry is gaining substantial attraction as alternative fuel for the petroleum derived fuels in order to mitigate major concerns of global warming, raised due to the fossil fuels.
What is the major factor driving growth of the global biofuel market?
Growing demand for biofuel as environment-friendly fuel in the road transportation is major factor driving growth of the global biofuel market.
How much was the North America region market share in 2020?
North America dominated the global market with a market share of more than 36%.
What is the CAGR of Asia Pacific region in the global biofuel market?
Asia Pacific is anticipated to grow at the maximum CAGR of around 8.5% in the forecast period due increasing implementation and focus on the government regulations in account to mitigate the green house gas emissions in the countries of the region especially in India, China and Japan of the region.
Which major companies are functioning in the worldwide biofuels market?
The major companies functioning in the worldwide biofuels market are Abengoa Bioenergy S.A., VERBIO VereinigteBioEnergie, DowDuPont, Inc. Archer Daniels Midland Company, BTG International Ltd, Renewable Energy Group, Inc., Wilmar International Ltd, POET LLC, Cargill, My Eco Energy, China Clean Energy Inc. among others.
Why ethanol segment dominated the overall market in 2020 in biofuels market?
Ethanol segment dominated the overall market in 2020. The growth is attributed to growing use of ethanol as environment-friendly fuel in the automotive applications in order to lessen the global greenhouse gas emission.