The global ethanol market size was valued at USD 93.7 billion in 2020 and is predicted to surpass around USD 155.6 billion by 2030, growing at a CAGR of 5.2% during the forecast period 2021 to 2030. Growing consumption of alcoholic beverages an increasing adoption of alcohol based hand sanitizers are major growth driver of ethanol market. 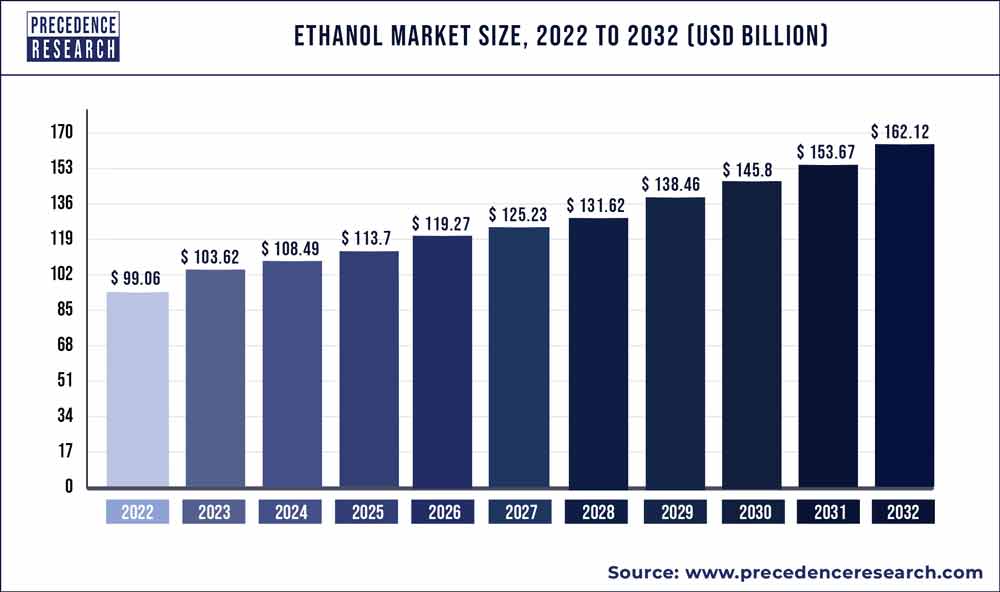 Emerging applications of ethanol are anticipated to create potential opportunities for the key players operating in global market. Aviation industry is focusing on the research and development of ethanol blended fuels for the overall cost reduction and to reduce carbon emission. Recent applications of ethanol in ignition systems and emission control in transportation sector is expected to generate better opportunities over coming years. Further, outbreak of coronavirus disease has increased usage of ethanol-based hand sanitizers which is supporting global market growth. Centers for Disease Control and Prevention (CDC), recommended usage of ethanol as it is effective in killing microorganisms including bacteria, viruses, and fungi. Further, abundant availability of raw materials for the production of ethanol is developing countries is encouraging major companies to expand their production facility. Moreover, stringent environmental regulations for the use of biofuels are supporting ethanol production. Increasing end use applications in cosmetic industry as solvent and in many household applications are expected to boost target market growth in future.

Outbreak of COVID-19 has affected most of industries operating across the globe. Most of the leading countries across the world announced their lockdowns that has resulted into the disruption of supply chain of companies. Lack of raw materials, manpower, and leap in their off-premise sales has affected the production of ethanol. Further, reduced finished product demand from end-use industries hampered growth of the global ethanol market in 2020.

Due to ongoing COVID-19 pandemic, usage of alcohol-based hand sanitizers has been increased. As per the Food and Drugs Administration’s policy; ethanol can be used as an active ingredient in the hand sanitizers. So, the leading players operating in the target industry are focusing on increasing production of ethanol in order to get competitive edge in the global market. Further, according to the data published by National Institutes of Health (NIH) in September 2020, COVID-19 can be treated using ethanol vapor inhalation. Combination drug, ethanol with aspirin is intoits 3rd phase of clinical trials and have potential to treat viral diseases. That can have positive impact on the growth of the ethanol industry.

Denatured ethanol is anticipated to dominate the target market by purity during the forecast period 2021-2030. This is due to its growing demand from automotive and household applications worldwide.  Denatured ethanol is manufactured mainly from feedstocks like grains, starch. However, undenatured segment is expected to raise at a significant CAGR during the forecast time-frame.

On the basis of end-user segment the global market is segregated into industrial solvents, beverages, personal care, fuel & fuel additives, disinfectant, others. The fuel & fuel additives application segment is expected to dominate in terms of revenue over the forecast time frame. Increasing demand form automotive sectors coupled with regulations related to environmental safety in developed as well as emerging economies is expected boost growth of the segment in the near future. Additionally, beverages application segment will expand at a significant CAGR during the forecast time-frame. The growth is attributed to increasing demand for ethanol-based beverages in developed countries across the globe which is in tern fulling growth of the segment.

North America Is Estimated to Be the Largest Market for Ethanol

The research report covers key trends and prospects of ethanol products across different geographical regions including North America, Europe, Asia-Pacific, Latin America, and Middle East and Africa. Geographically, ethanol market is conquered by North America owing to favorable government policies for the production and use of ethanol as biofuel, along with growing awareness regarding environmental pollution control caused due to use of conventional fuels in the countries of the region. Asia Pacific is expected to register the fast growth rate, on account of expanding ethanol manufacturing capacity, coupled with presence of leading companies in the countries of Asia Pacific. Further, availability of the abundant feedstock for ethanol production is major factor responsible for the growth of Latin America ethanol market. Brazil is expected to hold major share in terms of revenue in Latin America ethanol market in the near future owing to growing production and export of ethanol from Brazil. 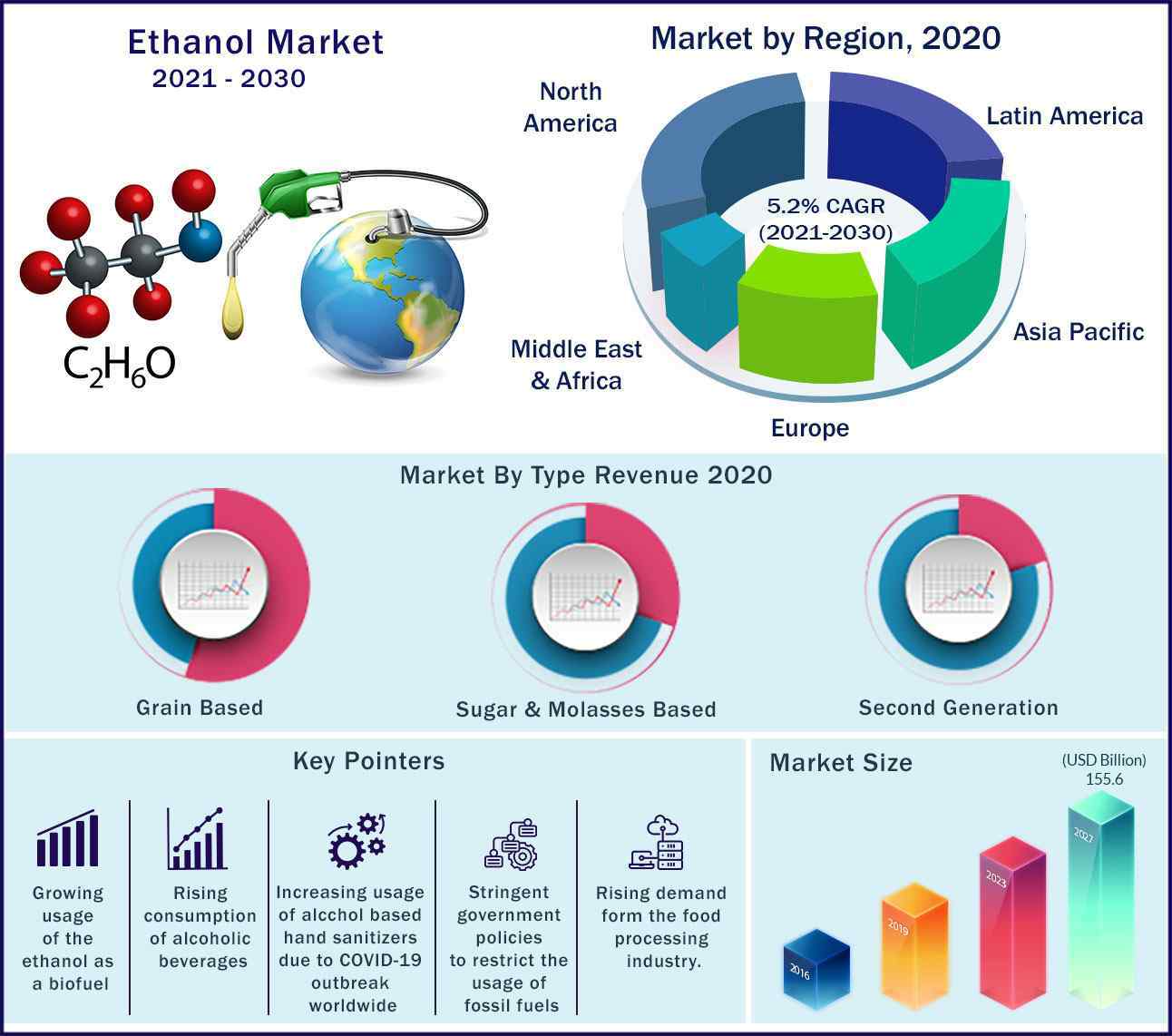 Top Players Contending in The Market:

In order to better recognize the current status of ethanol, and policies adopted by the foremost countries, Precedence Research predicted the future evolution of the ethanol market. This research study bids qualitative and quantitative insights on ethanol market and assessment of market size and growth trend for potential global market segments.

About
Precedence Research is a Canada/India based company and one of the leading providers of strategic market insights. We offer executive-level blueprints of markets and solutions beyond flagship surveys.
LEGAL
Connect with Us
Address: Apt 1408 1785 Riverside Drive Ottawa, ON, K1G 3T7, Canada
Call: +1 774 402 6168
Email: sales@precedenceresearch.com
© Copyright 2021, All rights reserved. Precedence Research
Home About Contact Industries