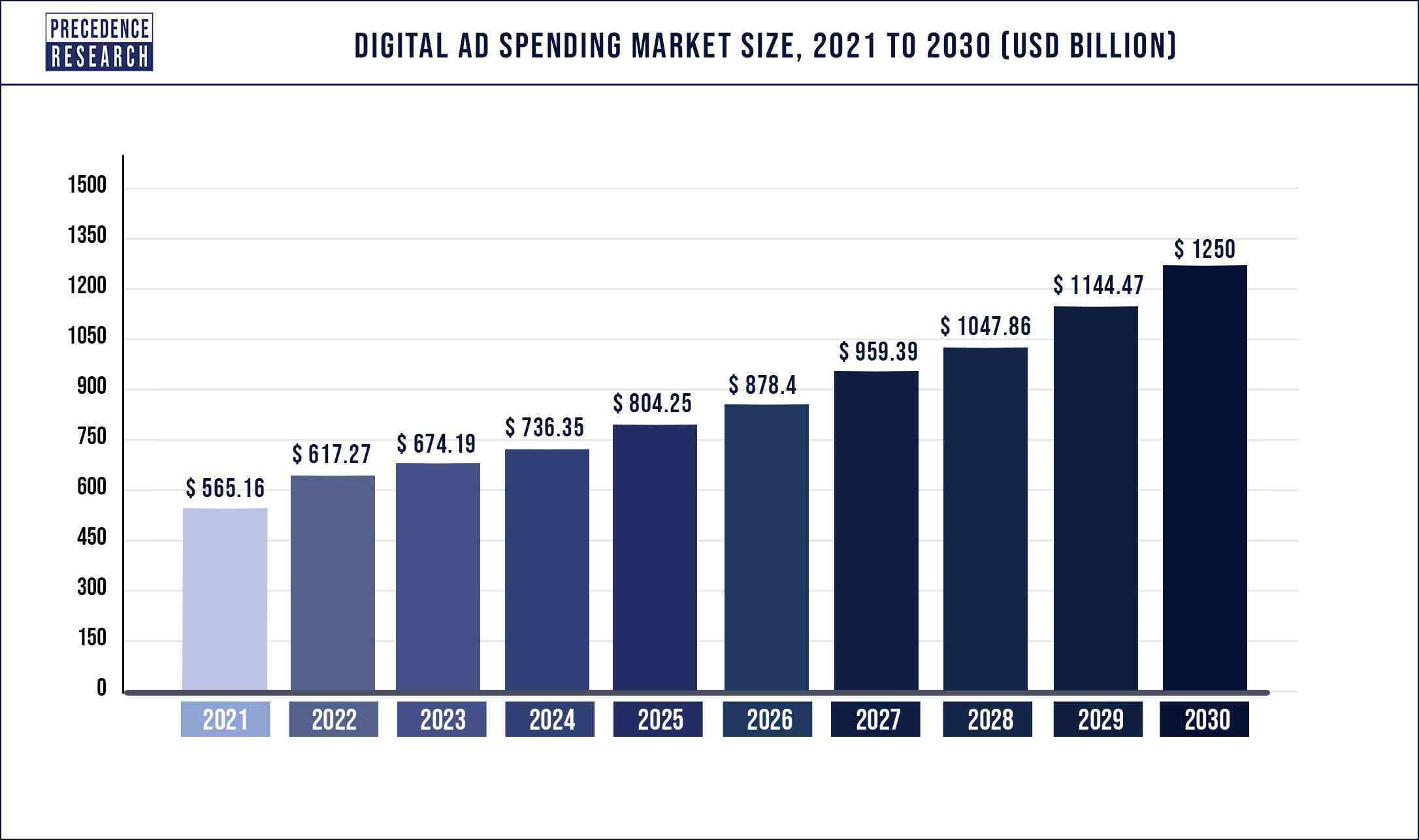 It refers to the expenditure on advertising related to Internet on devices like computer, mobile devices and smart devices. The digital ad spending market has improved during and posts COVID. The pandemic has actually accelerated the shift to visual advertising. People are spending a lot more time at home consuming a lot of internet and therefore the market has grown.

The digital ad spending market has seen a good growth during the pandemic. As there were numerous lockdowns and work from home scenarios, people did not get out of their houses. Which increased the demand for Internet and therefore the online advertising market has grown. The social networking sites and the online portals were attractive and it has resulted in an increase of online population and streaming as there was an uncertainty of the pandemic ending. As there's an increase in digital spending by the enterprises and advancements in the technology the market is expected to grow during the forecast. According to new research by the Advertising Research Foundation, the shorter ads which are six second ads are able to capture 10% to 11% more attention per second than the ads that are longer in duration.

The increasing number of Internet users worldwide have brought about an evolution on the online advertising and given rise to different forms of digital advertising. As the digital world is growing there are entries of new market players and new market levels. Various devices have various types of advertisements but consumers prefer smartphone devices over laptops or desktops as they are convenient and easy to carry. The digital ad spend on mobile platforms is expected to grow well during the forecast period.

On the basis of the format of the ad, the video format is expected to grow during the forecast.In the recent years, the spending on traditional television advertisement has declined and the digital video marketing spending has increased and it is expected to rise during the forecast. Maximum investments are done for the mobile and desktop advertising amounting to almost 2/3 of the total advertising budget. Photo video ads are used bymost of the companies as this is the main trend in the recent years as shown by many studies. Visual ads provide a better understanding and involvement in the product.

On the basis of the end user, the retail segment is forecasted to show a good growth amongst all the nations across the world. The pharmacy and the Health Care segment is expected to grow, but at a slow rate. Retail segment is the largest category in the digital ad spends market followed by the automotive sector, financial services, telecom, consumer products, media, entertainment, healthcare and others.

North America occupies the largest market share, as this area is well aware about the use of smartphones and the various online activities. As some of the key market players are located in US. It has got a strong foothold in online advertising. The three prominent global ad agencies, Zenith, Group M and Magna issued their forecast for the marketplace stating that the digital marketplace was driven by digital media, specifically social media apps, Video and search. The countries like UK, US and France top the digital growth chart and they're spending more rapidly on this platform. 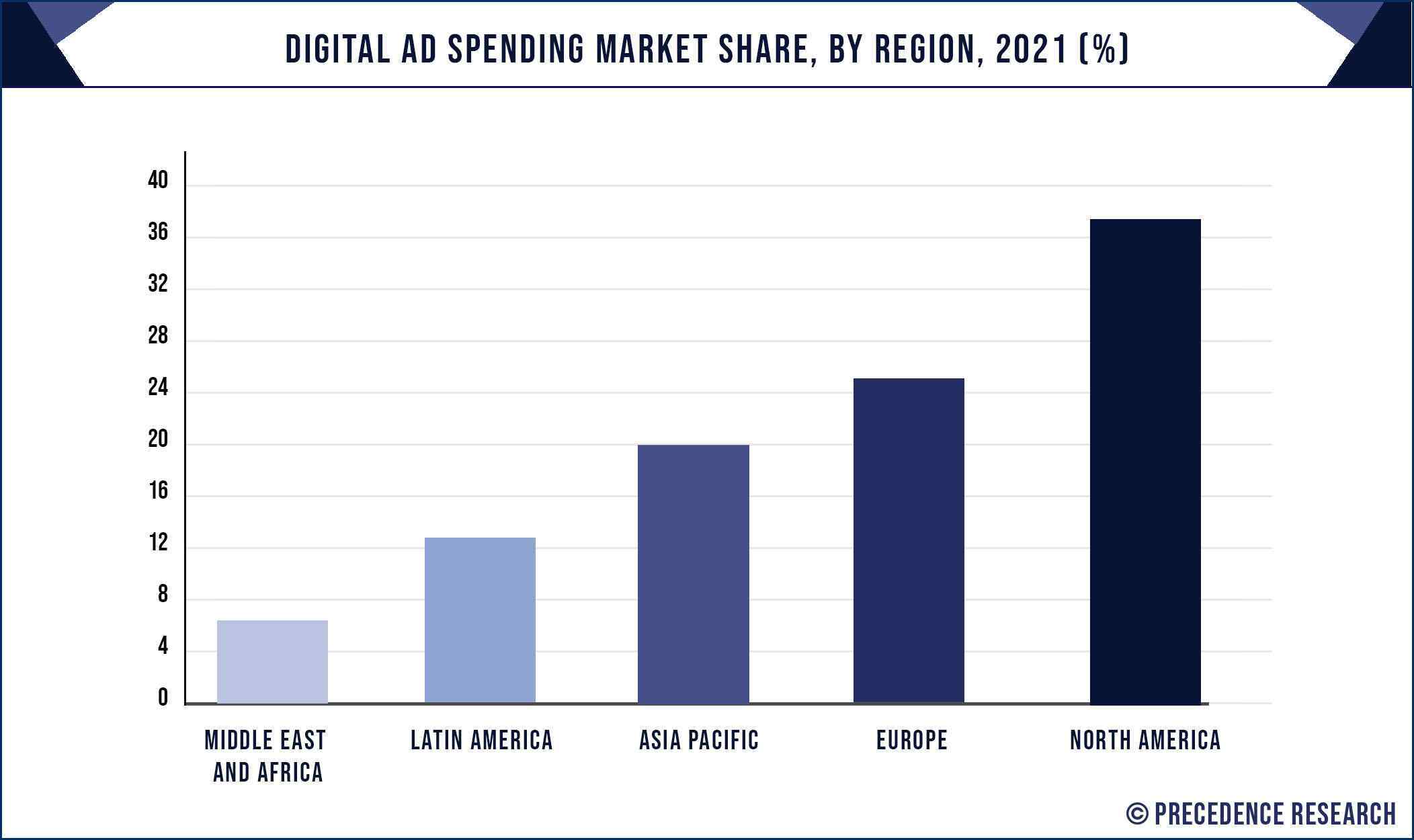 The digital spend of Europe is expected to grow by 27.4% and that of North America will grow at 37.5%. The top company, Google, is expected to capture 38.1% global growth. The ad spend on social media is expected to overtake the TV next year. Due to a trend of shopping online during pandemic there were a lot options of ecommerce websites. Businesses are investing in their technology, infrastructure and advertisement. Investment in the ecommerce channels has grown because people are shopping online from their comfort zone. The fastest growth is expected to come from Central and Eastern Europe.

Google launched new features which are aiming at helping the advertisers in using the company services. In order to make their products stand out in the search results on all the platforms which was launched in July 2020? Another feature developed by Google, is to configure the ads in a manner that Google can get related images from the advertiser's online material and include those images in the search results. As there is an increased application of diverse crypto currencies in many industries and many associated regulations that are in place for smooth functioning, Google, who had banned the advertisements of crypto currency, had to reverse the ban in United States. D.A Consortium Inc  announced that it shall be newly certified as the Spotify advertising partner by Spotify AB, in order to sell reservation-based ads with the help of its DSP MarketOne.

Infectious advertisement, which was appointed by the Advertising Standards Council of India on May 2020, will provide BTL, ATL and digital creative services to ASCI and support for Strategic campaign development and reaching programs for the audience. Facebook has collaborated with L'Oreal, Motorola, Stanley Black and Decker for helping the companies in retail, in wholesale, in manufacturing, in the groceries, in the Consumer Packaged Goods and other verticals to sell more and operate in an efficient manner to seamlessly scale and deliver good customer experience. Microsoft Advertisement has integrated new features which helped in indicating the dedication to their customers, it helps in aligning the brand values with the values of the customers and how the brand is inclusive of the values of the customers. This feature helps to communicate quickly and it helps in creating a liking for that brand. It increases the authenticity of the brand and builds trust among the customers. This initiative by Microsoft advertisement is exclusive.