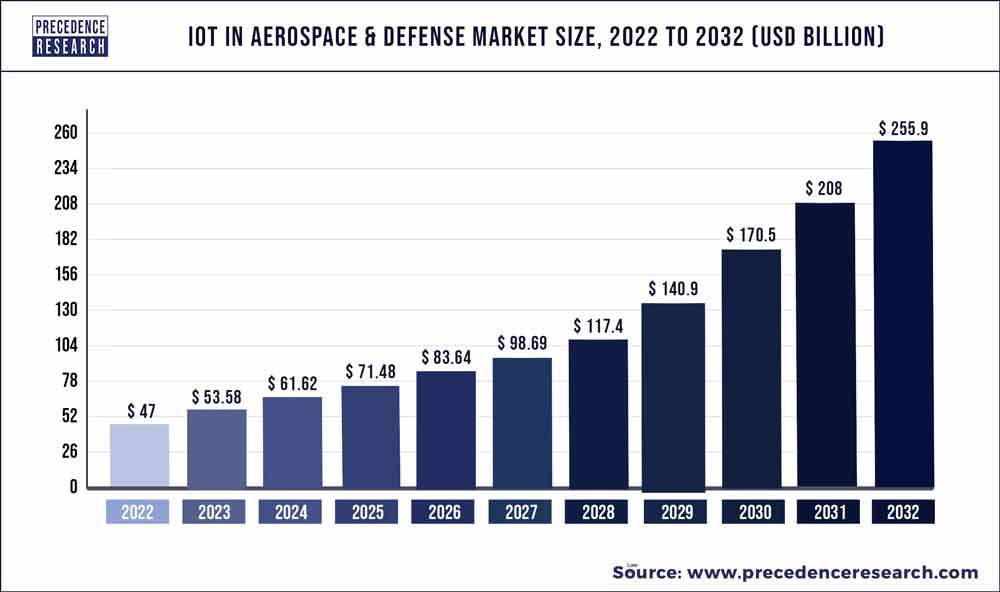 The use of networked smart devices with real-time data collaboration is referred to as the internet of things (IoT) in aerospace and military. IoT has limitless potential for the aerospace sector. The airline sector may concentrate on improving passenger safety, lowering costs, system maintenance, efficiency, security, and customer experience by using IoT effectively. The Internet of Things is already making its way into aero plane cabins, assisting Original Equipment Manufacturers (OEM) in lowering the cost of the aircraft with clever aerospace sector solutions. Electronics in the aircraft cabin are used to monitor and manage a sizable number of electrically powered, interconnected cabin components.

Owing to its connectivity and real-time data exchange, IoT in Aerospace & Defense helps the aerospace and military sector to achieve optimum operational efficiency of the supplements with various features like predictive maintenance, data analytics, and smart surveillance. The global IoT in aerospace and military market is expanding as a result of increased internet usage and falling prices for potent sensors and controllers. The development of the industry is also fueled by the advancement of information, communication, and technology (ICT) as well as government spending in both established and emerging nations.

Report Scope of the IoT in Aerospace & Defense Market

The demand for greater national security has heightened the need for global IoT in the defense market. Given that the defense industry in a region is regarded as a key asset for the national territory, it is imperative that this sector has access to cutting-edge technology. Since sovereign territories urgently require improved physical protection on a large scale, defense IoT is essential to attaining this goal. The existence of a unified global electronic manufacturing base has had a significant impact on the growth of the IoT in defense industry globally.

The advantages of IoT in terms of high connectivity, improved security, and quick decision-making capabilities are what are driving the IoT in defense industry. Another reason driving the IoT in the military industry is the growing demand for creative and dependable services. The IoT's massive power consumption during wars or clashes may hinder its advancement in the defense industry. Ground and air operations are altering as a result of IoT utilization in the aircraft industry. For instance, IoT is being used by aerospace manufacturers to develop and use powerful analytical techniques that will boost operational effectiveness. IoT devices may cooperate with one another thanks to its wide connectivity, which also encourages effective coordination, cooperation, communication, and interoperability between humans and machines. These are unquestionably the essential elements of successful and profitable operations in the aerospace sector.

Building interconnected devices that can carry out a range of military tasks or missions is the goal of Internet of Things (IoT) integration into defense, also known as Military IoT. Defense The Internet of Things (IoT) is anticipated to alter information gathering, analysis, and flow, enabling more intelligent interactions between people, interfaces, and networks, ultimately boosting military decision-making. For communication purposes as well as a number of other tasks, modern military forces heavily rely on electronic networks. A few examples of how technology has improved include predictive maintenance, real-time equipment tracking, inter-equipment tracking, and remote upgrades. There are several key factors that are anticipated to propel the IoT adoption in the aerospace and defense sector, including battlefield awareness, warfighter health monitoring, proactive equipment maintenance, remote training, and effective inventory management.

Globally, the Internet of Things is being developed, with an emphasis on personnel applications outside of the military. IoT is a perspective that takes into account the inescapable closeness of numerous sensitive things and objects on Earth. Through wired and remote connections, they can collaborate to develop new applications with the aim of attaining common goals.

In order to provide precise and up-to-date information on energy usage throughout the whole production phase, aerospace companies are implementing IoT-enabled smart meters in the manufacturing of aero planes. Utilizing sophisticated analytics algorithms, these smart meters examine energy consumption and suggest energy-saving strategies. Success depends on minimizing the amount of time an aircraft is grounded. IoT sensors were used by aerospace to do this. Aerospace businesses can keep planes in the air and save money by fixing problems as soon as they land thanks to robust IoT sensors that offer performance data from thousands of angles. IoT sensor data can help cut down on the cost, labor, and time required to perform routine maintenance.

Depending upon the component, the hardware segment has garnered highest market share in 2021. Due to rising IoT device demand, the need for low-cost hardware, and the necessity for many sensors and chips for smart devices, the IoT hardware market in aerospace & defense is growing. Because of the enhanced security features for IoT devices, such as content protection, authentication, virus detection, and theft deterrent, it is anticipated that the market for IoT in aerospace and defense would expand. 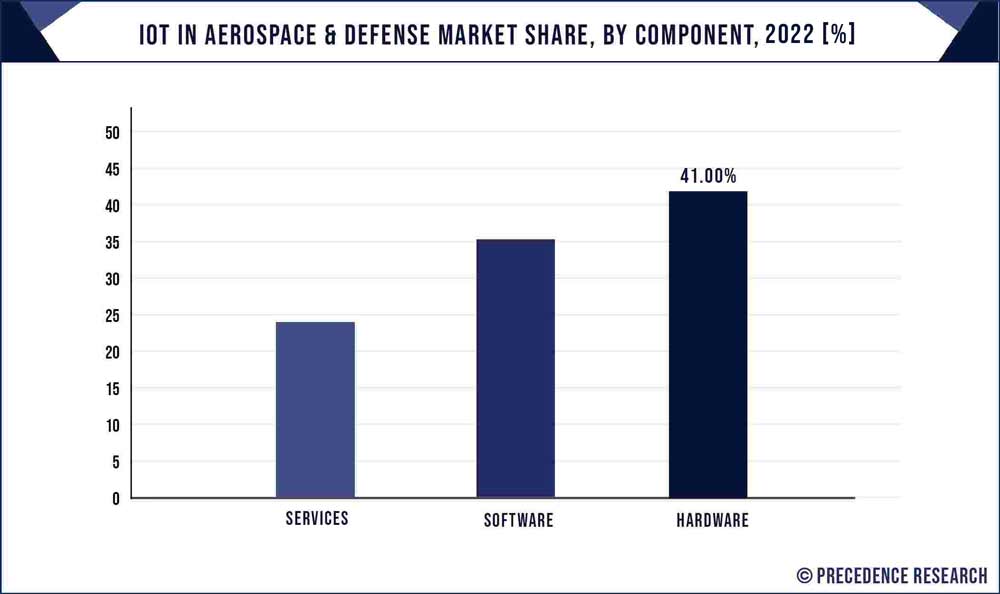 During the projected period, the services sector is anticipated to have a significant share in the market. These services, which include development, consulting, data analytics, and app management, are aimed at streamlining and automating the organization's activities. This benefit is anticipated to support the segment's expansion.

During the projected period, the real time fleet management segment is anticipated to be the largest in the IoT in defense and aerospace industry. Fleet industry operations have seen a significant transformation as a result of the adoption of IoT, which has made fleets smarter and more effective. Real-time tracking of fleet whereabouts and condition is made possible by IoT-based sensors. Additionally, they make a substantial contribution to the analysis of other fleet characteristics including the armed truck's speed and braking system. Implementing an Internet of Things-based fleet management system aids in minimizing a number of issues, including a lack of real-time supervisory information concerning increased fuel use, sluggish deliveries, and driver management.

North America region dominated the market with highest revenue share in 2021. The technology advancements and high adoption of internet of things are rising the regional growth of the market. Rising advancements in defense sectors includes the rising need of IoT in this region. The market is being driven by the huge number of LTE subscribers in the U.S. and Canada.

Asia-Pacific is considered as second largest region in the IoT in aerospace & defense market. This region includes China, India, Japan, South Korea, and rest of the world. Due to increased technical advancements, such as the transformation of industrial infrastructure into a smart environment and the integration of blockchain and cryptographic techniques throughout loT security services, the market in Asia-Pacific is also anticipated to expand quickly. During the projection period, Asia-Pacific is anticipated to experience a considerable growth rate, due to the growth of urbanization, growing economies like China and India, and other factors. The Indian government intends to create centers of excellence for research, digital manufacturing, education, and talent development in robotics, big data analytics, quantum communication, and the internet of things.

Europe is having a decent growth in the IoT in aerospace & defense industry during the forecast period. The demand for Internet of Things (IoT) products is growing across Europe. European IoT adoption is now being led by Germany, the UK, and the Netherlands, while Eastern European nations and the Nordics are closely trailing. The industries leading the way in IoT adoption are those in manufacturing, housing, healthcare, and finance, but the retail and agricultural sectors are also experiencing significant development. Demand for outsourcing is still being driven by a lack of qualified specialists and a growing willingness to outsource.