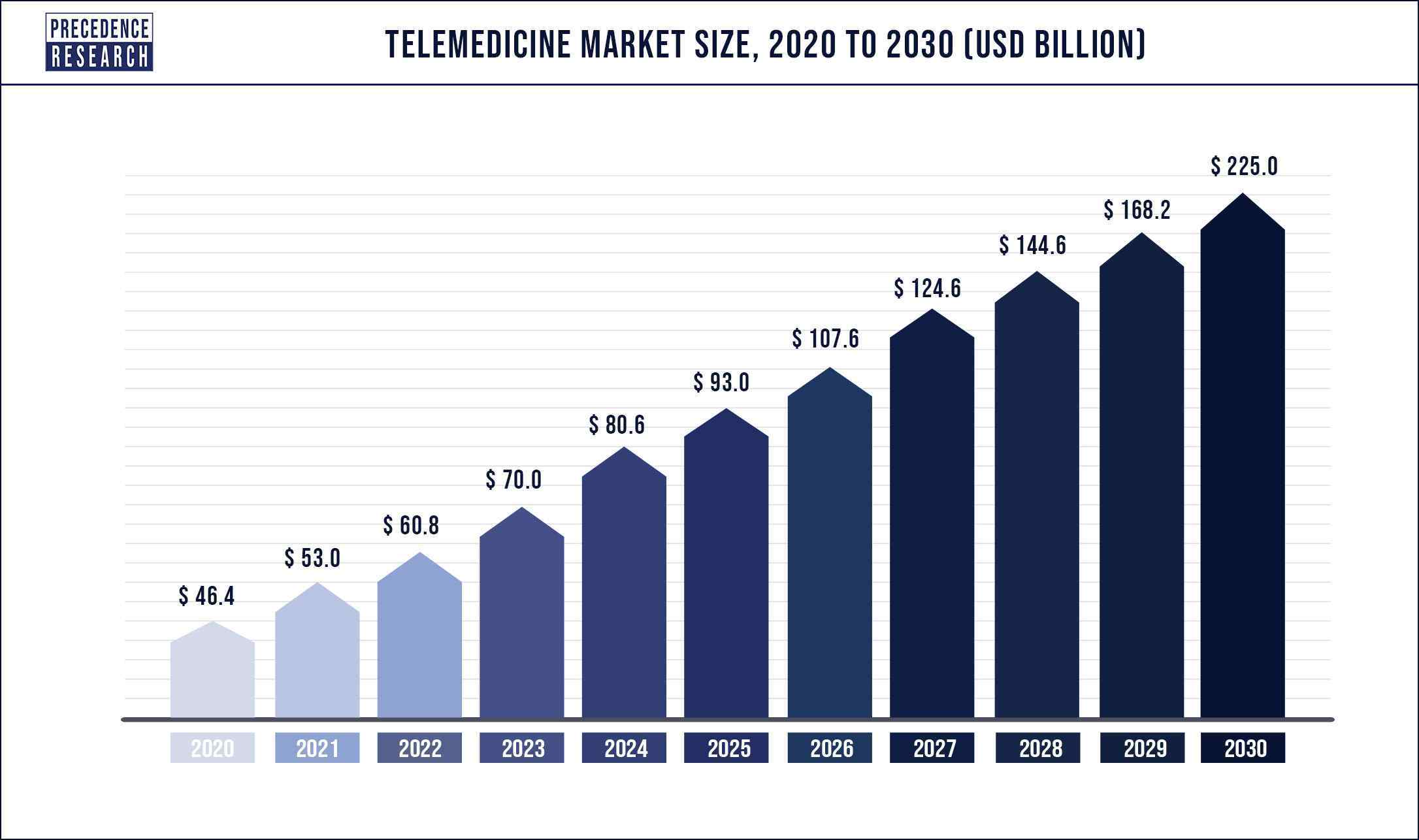 Telemedicine is not a new practice and debuted during the late 1940s. The U.S. space agency, NASA, also significantly contributed to the evolution of telemedicine. The agency significantly investigated the application of telemedicine in monitoring the physiological parameters of the astronauts. In 1989, telemedicine first received global attention when NASA introduced its first International Telemedicine Project by launching a spacebridge to Armenia, to offer the U.S. medical support after an earthquake struck the Soviet Republic of Armenia.

However, the year 2015 was a significant year for the growth of the telemedicine market. As per Pew Research Center, two-third of the U.S. population owned a smartphone and many were using smartphones to research medical information. Also, more than 750,000 telemedicine consultations were provided in the U.S. in 2015.

The rising government investments to develop IT and telecommunications infrastructure, the growing dependence of the consumers on the digital services, increasing number of internet users, and increasing adoption of the smartphones are the major drivers of the telemedicine market. According to ITU, around 4 billion people were using internet by the end of 2019. Most of the internet users operates through their smartphones.

A Surge in Telehealth Adoption: Patient and Provider Perspective

The number of patients using telemedicine services significantly increased particularly in the last decade. According to a study published in the JAMA network (2018) examining the trends of telemedicine in a large commercially insured population between 2005 to 2017, the number of patients using telemedicine services had only increased steadily from 206 in 2005 to 202,374 in 2017 with an average growth rate of 52% annually. According to Becker’s Hospital Review, the number of telehealth users increased from 350,000 in 2013 to 7 million in 2018.

In addition, as per Amwell, a leading telemedicine service provider, the physician telehealth adoption rates increased by 340% from 2015 to 2018 (only 5% adoption in 2015, which surged to 22% adoption in 2018). The data shows how telemedicine adoption has significantly outpaced the early years of adoption of electronic health records.

The tele-home segment is predicted to reach notable growth during the forecast period. The rising preferences of the people to get treatment at their homes, especially the geriatric people and the increased awareness regarding the hospital acquired infections among the population are the major factors that are expected to drive the growth of this segment.

Based on component, the product segment accounted 45% revenue share in 2022. The product includes hardware and software. The hardware consists of wide variety of devices and are extensively used in the hospitals, clinics, and homecare telehealth devices. Various hardware used consists of mobile frame, communication lines, computer systems, therapeutic devices, video feed, and various others. The extensive usage along with the high prices of the hardware has resulted in a huge revenue generated by this segment. Moreover, the rapid development and updates in the software system to enhance the efficiency and effectiveness of the telehealth devices is exponentially boosting the segment growth. 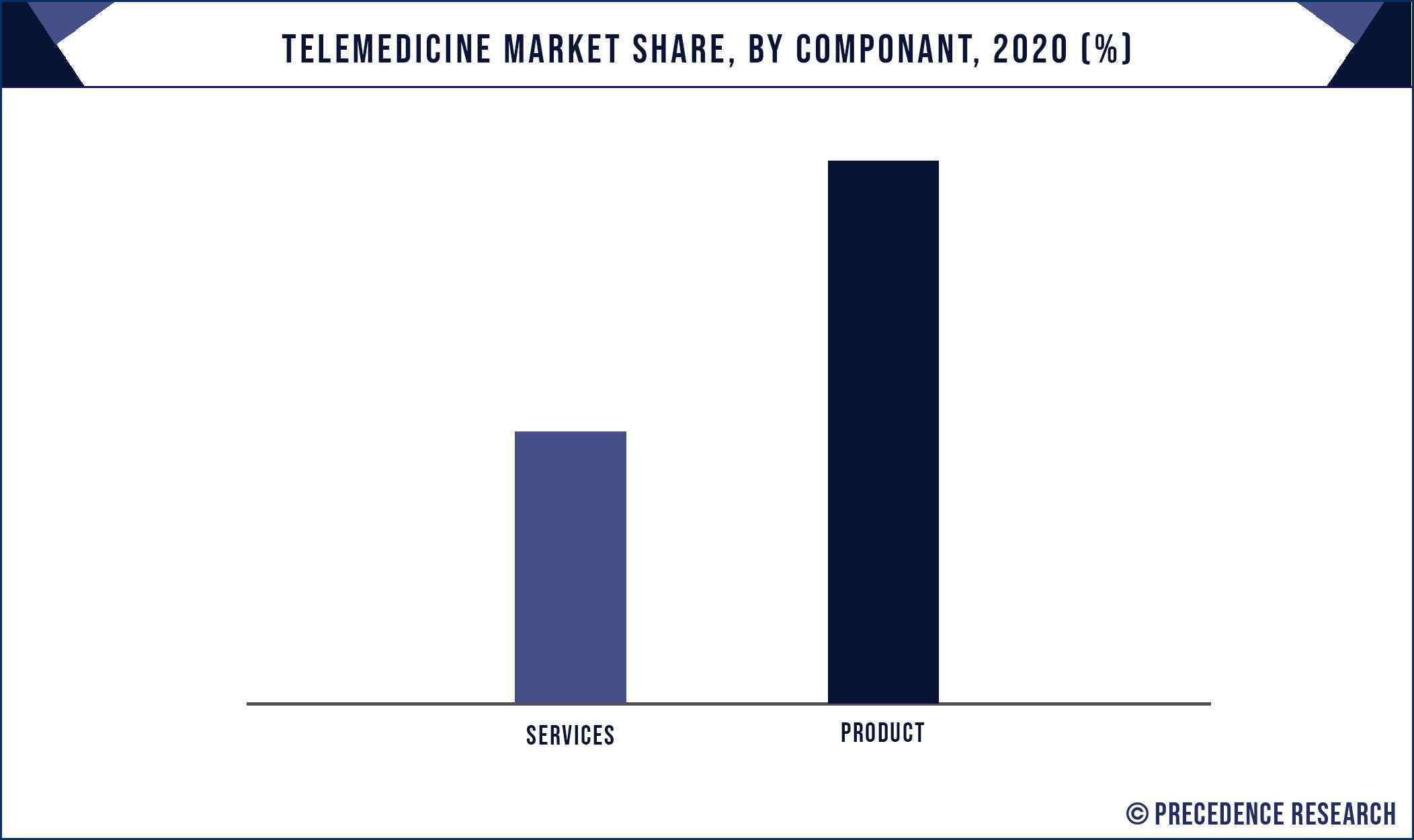 The services segment is projected to reach highest CAGR over the forecast period. The rising adoption of the telemedicine among the consumers and the doctors or physicians is propelling the sales of various services such as e-monitoring, e-consulting, and e-education, which is expected to drive the market growth.

Based on application, the teleradiology segment accounted 27% revenue share in 2022 and is expected to witness remarkable CAGR over the forecast period. The demand for the teleradiology increased rapidly in the past few years owing to various benefits it offers such as faster diagnostics, clear imaging, lower costs, and elimination of the excess work of the radiologists. This segment accounted for over 25% of the market share in 2020.

The telecardiology segment is expected to be fastest-growing segment during the forecast period. This is attributed to the rising prevalence of cardiovascular diseases among the global population coupled with rising adoption of the telemedicine platforms. Telemedicine provides patient monitoring feature who has a cardiac device implanted. It improves the patient care and hence the demand for this segment is expected to grow.

Based on technology, the store & forward segment accounted 41% revenue share in 2022 and is projected to witness remarkable CAGR during the forecast period. The telemedicine app can store the past health records of the users and this information can be communicated to the doctors or the physicians at the time of treatment, which can enhance the patient care and benefit the patients.

The real-time segment is expected to hit largest CAGR over the forecast period. The real-time is very much useful especially at the tele intensive care because it transfers the patient’s data quickly to the intensivist at a distant location and helps the ICU members at the hospital in the treatment of the patient.

Based on region, North America accounted 35% revenue share in 2022. The rising burden of chronic diseases and growing geriatric population in US are the major factors behind the growth. Moreover, the region is characterized by increased disposable income, increased demand for the advanced technologies, and developed healthcare and IT infrastructure. According to NCBI, over 40,000 health apps were available for download on Apple iTunes store in 2013 in US. Thus, rapid growth of the telemedicine is boosting the market growth in this region. 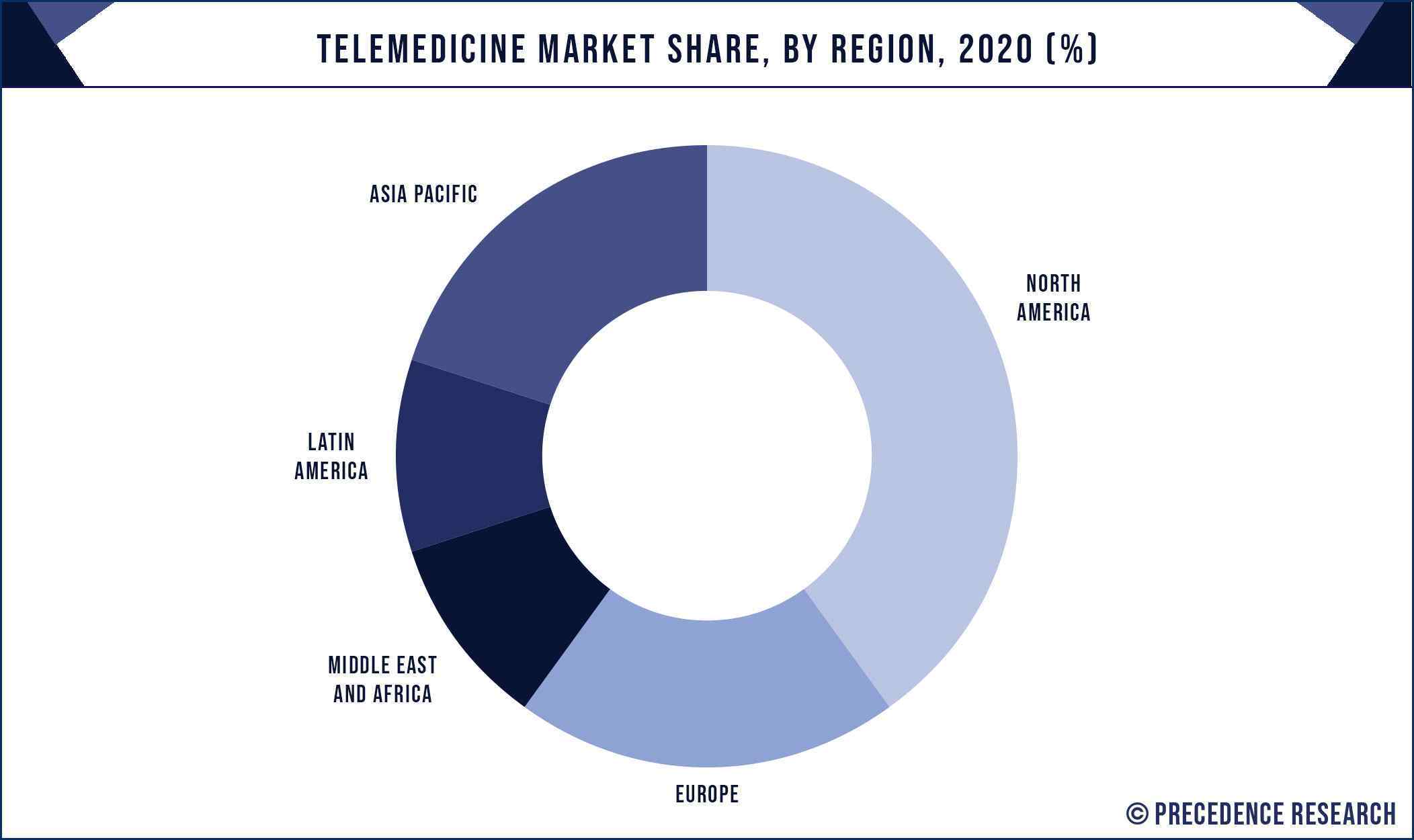 In May 2021, MediTelecare launched a direct-to-consumer mobile technology, named MediTely. It was especially designed for the old age population.

Market Share Analysis for Software Provides in the Telemedicine Market

Report Scope of the Telemedicine Market