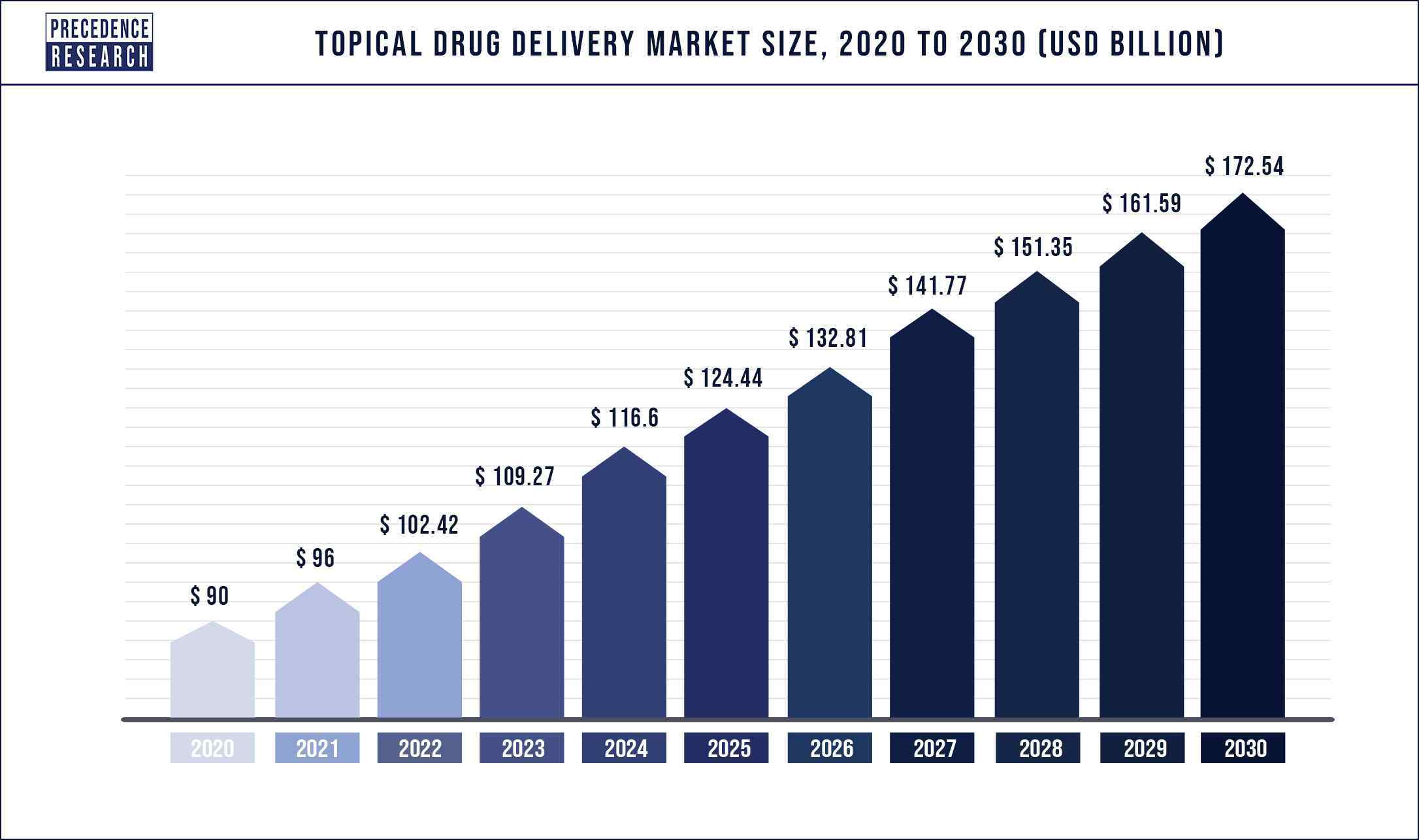 Key factors that propels the topical drug delivery market includes burn injuries and high frequency of skin conditions, deep drugs penetration in human body, surge in preference towards topical drug delivery owing to its nature of non-invasiveness, and surge in senior population. Factors similar as biologics deliveries via the transversal route and accession of small key players are anticipated to present myriad opportunities for market growth in near future.

According to the Disease Project of Global Burden, various skin diseases like eczema, psoriasis, vitiligo and skin cancer continue to be the major and leading cause of nonfatal disease burden around the globe and thus further affect a large proportion of the global population. As per the data of WHO, 0.1 million of melanoma skin cancer cases and in between of 2 to 3 million of non-melanoma skin cancer cases are diagnosed every year across the globe. In addition, the occurrence of psoriasis around the world ranges from 0.1% to 11.5%, which is making it a major problem around the world with at least 100 million individuals affected worldwide. Therefore, the demand for advanced topical products is likely to boost in the forthcoming years.

The growing frequency of diabetes is a crucial driving factor for the topical drug delivery market growth. As per the World Health Organization, the number of people suffering from diabetes rose from 108 million in 1980 to 422 million in 2014. Likewise, roughly1.6 million deaths were caused by diabetes in 2016. Diabetes is a habitual complaint which occurs if the body cannot use the insulin it produces effectively or if the pancreas doesn't produce enough insulin. Since topical drugs are used considerably for treating diabetic neuropathic pain and bottom ulcers, their demand is adding with the growing frequency of diabetes.

Raw material needed for manufacturing drugs, similar as drug component and equipment used in manufacturing, are at the threat of a supply shortage owing to the temporary lockdown of manufacturing hubs in areas affected by COVID-19 or travel restrictions impacting shipments. Still, presently, the trading and import of raw material has proceeded back owing to the uplifting of lockdowns and proceeded manufacturing and product of pharmaceutical companies.

The disruption caused by the COVID-19 has handicapped the global market considerably, performing in various problems in the supply chain of a various essentials, but the epidemic has caused a rise in the sector of healthcare majorly among the pharmaceutical industry. In addition, key players around the world are going through from cancellations of event and are preventing pharmaceutical companies from introducing new services and products. In addition, digitalization in the world of pharmaceutical incorporated literacy into unborn extremity processes and plans.

On the basis of application, the topical drug delivery market is classified as cancer, central nervous system disorders, cardiovascular diseases, infectious diseases, respiratory diseases, autoimmune diseases, diabetes, and other. In 2020, the infectious diseases segment estimated for the majority of the market share of the drug delivery of pharmaceutical. The large share of this market member can be attributed to the adding frequency of contagious conditions across the globe, adding research & development expenses for new drugs owing to the current COVID-19 epidemic script, and the growing number of FDA approvals for similar drugs.

Geographically, the largest topical drug delivery market share was held by North America, primarily because of the presence of large number of pharmaceutical companies. The Asia-Pacific (APAC) region is anticipated to grow at the fastest pace in the coming times. The reasons for this are the rising healthcare expenditure, adding focus of pharmaceutical companies in the market in developing countries, growing senior population, and surging disposable income. 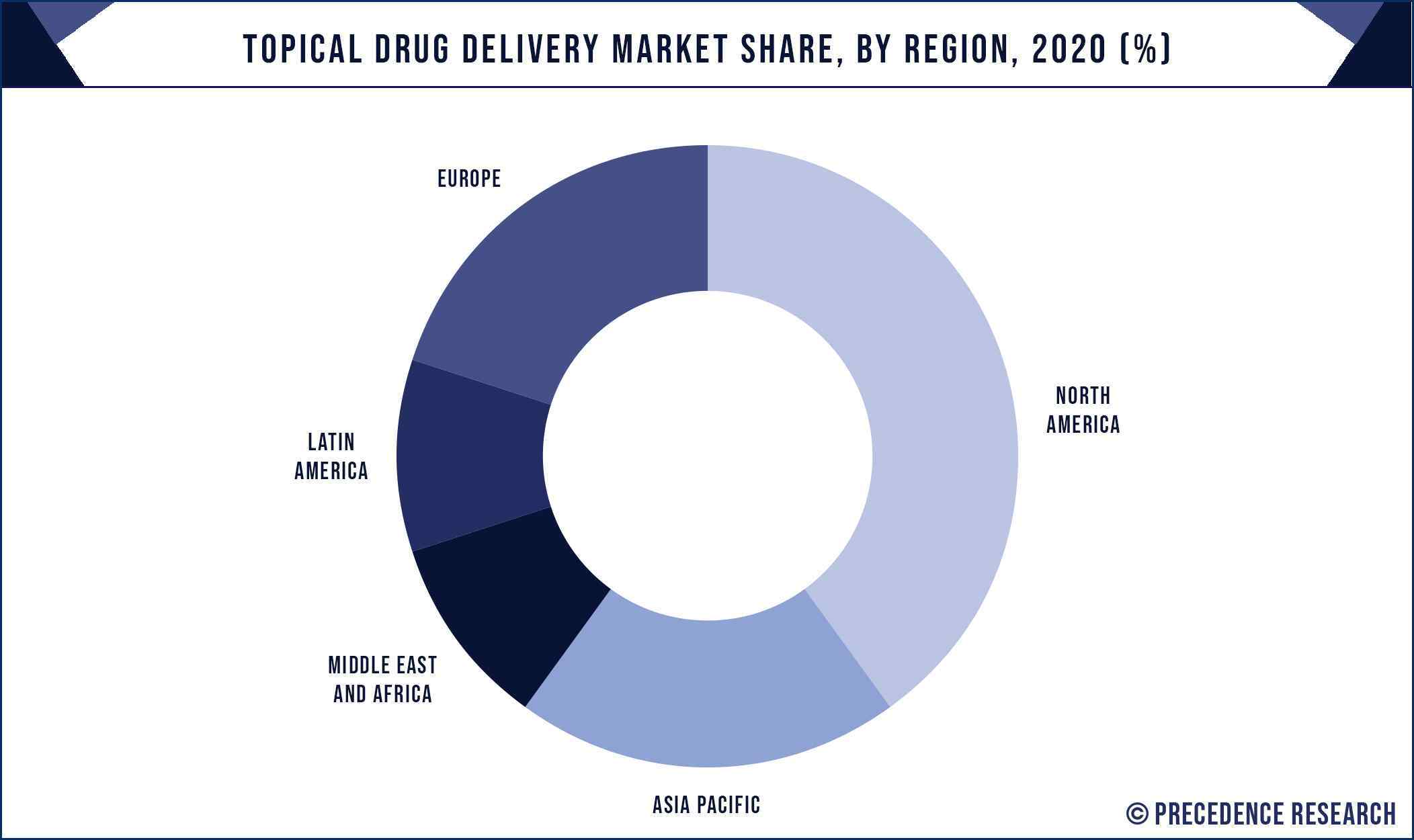 The Topical drug delivery market is highly fragmented with the presence of several local and global companies. These key players are highly determined to gain huge market share by adopting various strategies, such as partnerships, investments, mergers and acquisition. Companies are also spending on the development of improved products. Moreover, these players are further focusing on maintaining pricing which is competitive in nature.

Recognizing the potential for biologics manufacturing, companies, such as Evonik (Germany), have made several strategic developments. Furthermore, the company also raised its capacity of production by acquiring SurModics in the year 2021, which majorly focuses on parenteral applications of controlled-release. In addition, the key player named Evonik acquired a various complementary technologies, such as BoehringerIngelheim’s RESOMER platform, in order to improve its ability in this market.

Similarly, in 2019, the key player named WuXi Biologics declared the launch of its WuXi Vaccines, which is a joint venture with the company named ShanghaiHile Bio-Technology Co., Ltd. In addition, this companies entered into the partnership based strategy under which WuXi Vaccines will build a dedicated facility and thus supply a commercial global market product. In addition, the biopharmaceutical industry has further foreseen the emergence of a new level of therapeutics, presenting significant potential in diabetes, oncology new treatments, and other disease areas.

Some of the prominent players in the global Topical drug delivery market include: