The global acute repetitive seizures market garnered revenue around US$ 180.3 million in 2019 and predicted to register a compound annual growth rate (CAGR) of about 46.7% throughout forecast period 2020 to 2027.

The global acute repetitive seizures market is expected to reach around US$ 4.3 billion by 2027. 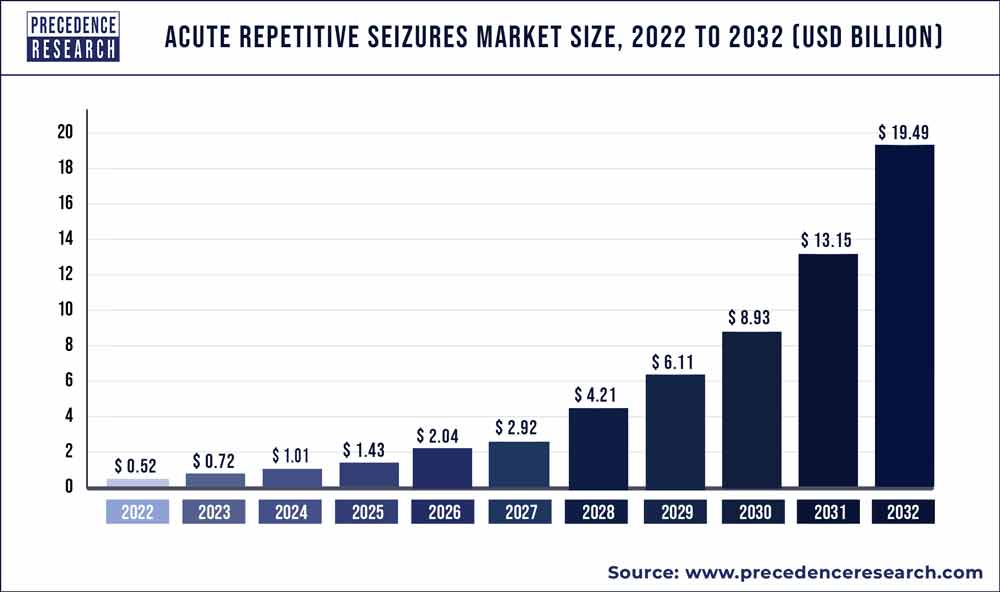 Upsurge in patient populace with status epilepticus and acute repetitive seizures are the main reason bolstering the development of the epileptic seizures treatment market. High unmet clinical requirements for patients along with caregivers, and obtainability of cutting-edge product pipeline are certain foremost influences predicted to push market growth. Drug therapy is operative for most of the patients undergoing from cluster seizures. Yet, there are a substantial amount of treatment issues and unmet medical requirements such as adversative reactions, drug-induced seizures, and deficiency of antiepileptogenic agents that can avert the growth of seizures and its comorbidities. Ratio of acute treatment successes and route of administration are crucial drivers of physicians’ recommending decisions and/or are the emphasis of drug development for novel ARS therapies.

On the basis of product, acute repetitive seizures market is classified into Diastat Rectal Gel, NRL-1, USL-261, AZ-002, and others. Among all, Diastat Rectal Gel controlled majority of the revenue stake in 2019 due to its competence and absence of FDA-approved drugs in the marketplace. It is the solitary FDA-approved drug and the generic forms of it were announced in 2010. Amongst the numerous routes of medicine administration, patients favor the intra-nasal route over other kinds including rectal, buccal, and intramuscular route. Parenteral medications have confirmed to be the optimum choice for outpatient treatment. Yet, in few nations like the Netherlands, caregivers are not competent for managing parenteral medications.

North America garnered foremost share of the global acute repetitive seizures and epileptic seizures treatment market in 2019. This growth is credible to escalation in occurrence of neurological disorders, current drug approvals, surge in brain injuries, and deep-rooted healthcare structure. North America is likely to continue this trend during the estimate period. Further, acute repetitive seizures market in Europe is expected to advance at a rapid pace from owing to upsurge in investment R&D in the area of neurology, upsurge in funds presented by the government, and escalation in requirement for medications for epilepsy.

As per data released by National Center for Biotechnology Information, in February 2016, U.S. Library of Medicine specified that each year 50,000 to 150,000 individuals in the U.S. affected with status epilepticus, with mortality projected at less than 3% in kids, nonetheless around 30% in adults. Asia Pacific is expected to develop at a higher growth rate within the estimate period, due to greater epilepsy patient population, intensification in alertness about epileptic seizures, upsurge in emphasis on refining healthcare infrastructure, upsurge in elderly population, and increasing number of market participants reinforcing their footmark in the region.

Furthermore,growing in consciousness about the treatment of neurological disorders and upsurge in requirement for novel drug formulations for treating critical situations in neurology are further boosting the market growth in this region. 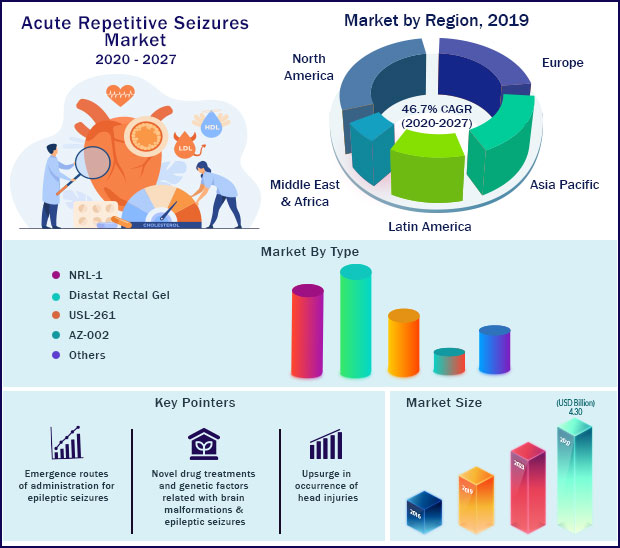 New-fangled product advancement with novel route of administration, acquisitions, mergers and tactical associations, distribution tie-ups, and augmented research & development spending are the key approaches implemented by top players in the global acute repetitive seizures treatment market.The acute repetitive seizures market is motivated by an intensification in the number of pharmaceutical players involved in new-fangled drug development and upsurge in pervasiveness of epileptic seizures.

Noteworthy players operating in the Acute Repetitive Seizures market include:

This research report includes complete valuation of the market by means of extensive qualitative and quantitative perceptions, and projections concerning the market. This report offers breakdown of market into forthcoming and niche sectors. Further, this research study calculates market revenue and its growth trend at global, regional, and country from 2016 to 2027. This report includes market breakdown and its revenue estimate by classifying it on the basis of product and region as follows: