With the escalating adoption of battery–powered vehicles to track down the emission rate of a vehicle, 48 volt technology proved to be boon for the transportation industry. The 48V technology gain prominent traction in the recent past and expected to flourish over the coming years. Its cost advantage over pure electric & plug-in hybrid vehicles, less effort in development, and potential to immediately curb the carbon emission from a vehicle are the prime factors contributing towards the market growth.

Electric vehicles are very costly these days because of advanced battery systems integrated in the vehicle, thereby leading to less rate of adoption among middle-class public. Besides this, 48V technology cut down the operating cost of the vehicle along with improved vehicle efficiency and high running speed. In the wake of same, the automotive 48V technology is also regarded as the bridging technology between a pure electric vehicle and a traditional vehicle. 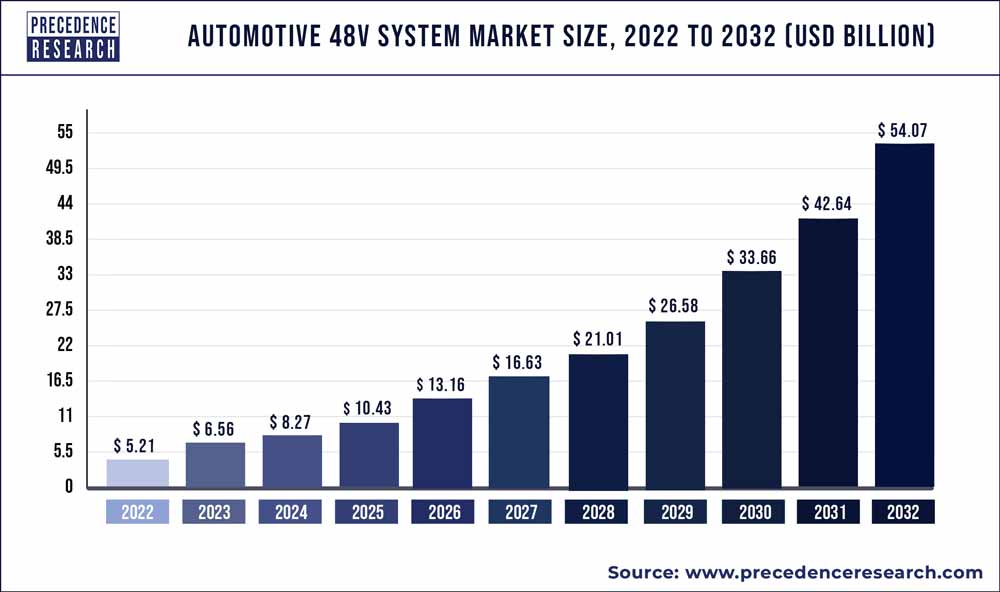 Moreover, stringent emission norms for automobiles issued by the governments of various regions to regulate the CO2 level in the environment that again trigger the adoption of automotive 48V technology in the near future. For instance, European Commission announced its plan to cut the emission rate by 37.5 percent by the end of 2030. To meet these standards Original Equipment Manufacturers (OEMs) are efficiently implementing 48V technology in their next-generation models.

In 2019, mid-sized vehicle segment captured the maximum value share in the global automotive 48V technology market. The growth of the segment is mainly attributed to the increasing preference for vehicles with improved fuel economy as well as increasing awareness among the people for battery-driven cars. In addition to this, stringent government regulation for the vehicle emission and safety expected to spur the adoption of 48V technology in the mid-sized vehicles.

Previously, 12V technology was used prominently in the vehicles to power the starter battery and electric components that include infotainment, lighting, and safety systems, whereas advancement in safety technology along with convenience features have made 12V an inadequate technology for modern vehicles. This contributes as the key reason that several automakers such as Mercedes-Benz, Fiat Chrysler Automobiles (FCA), and Volkswagen have started implementing 48V technology in their new car systems.

By architecture, belt driven segment occupied the major revenue share accounting for nearly 40% in the year 2019 and expected to witness prominent growth of around 24% during the forecast period. As, belt driven (P0) is the initial configuration of powertrain used in the mild hybrid vehicles, thus contribute notably towards its worldwide adoption. Pure hybrid vehicles are very costly due to their battery system, thus mild hybrid vehicles bridge the gap between the technologies and meet the condition of low carbon emission in an addressable cost.

In the belt driven (P0) architecture, the electric machine and the Internal Combustion Engine (ICE) cannot be separated as they are mechanically linked with the accessory belt. Consequently, one of the major disadvantages for this configuration accounts to the parasitic loss of the engine friction torque for the electric machine when it provides boost torque and when it’s improving electrical energy.

Besides this, dual-clutch transmission-mounted (P2), input shaft of transmission (P3), and transmission output shaft/rear axle (P4) mild hybrid architectures are superior in terms of energy flow efficiency, mainly due to the positioning of electric machines. In these types of configurations, electric machines are positioned after the driveline connecting device (clutch) on the P2, P3, and P4 system. 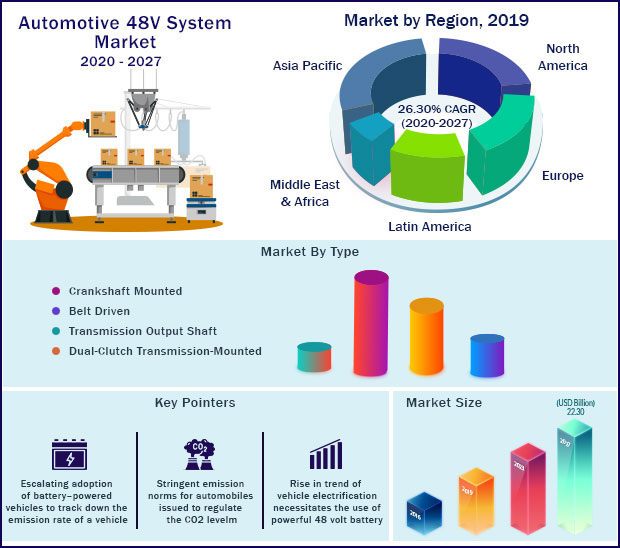 Based on region, the global automotive 48V technology market is studied in North America, Europe, the Asia Pacific, and Rest of the World. The Asia Pacific emerged as the global leader in terms of revenue for the year 2019 owing to significant consumer base along with increasing penetration of battery-powered vehicles in the region. China is considered as the world’s largest automotive market. At the same time, China seeks unprecedented growth in the sale of electric vehicle because of government subsidies. In March 2019, the government of China slashed subsidies for electric vehicle and plug-in hybrid EVs by a rate of 50 percent as well as banded provincial governments from collecting subsidies from local purchase of the vehicles that expected to boost the growth of 48V technology in the region.

The global automotive 48V system market is highly competitive and involves major automotive manufacturers. These players are prominently investing in the research & development (R&D) activity to enhance their product line and offerings. In addition, new product development helps them to cater the rapidly changing consumer demand in the automotive industry. Today, advancement in the convenience features along with safety systems are forcing the manufacturers to develop the compatible battery system without accelerating the cost of the vehicle.

Some of the prominent players in the automotive 48V system market include:

This research study comprises complete assessment of the market by means of far-reaching qualitative and quantitative perceptions, and predictions regarding the market. This report delivers classification of marketplace into impending and niche sectors. Further, this research study calculates market size and its development drift at global, regional, and country from 2016 to 2027. This report contains market breakdown and its revenue estimation by classifying it on the basis of vehicle class, architecture, and region: