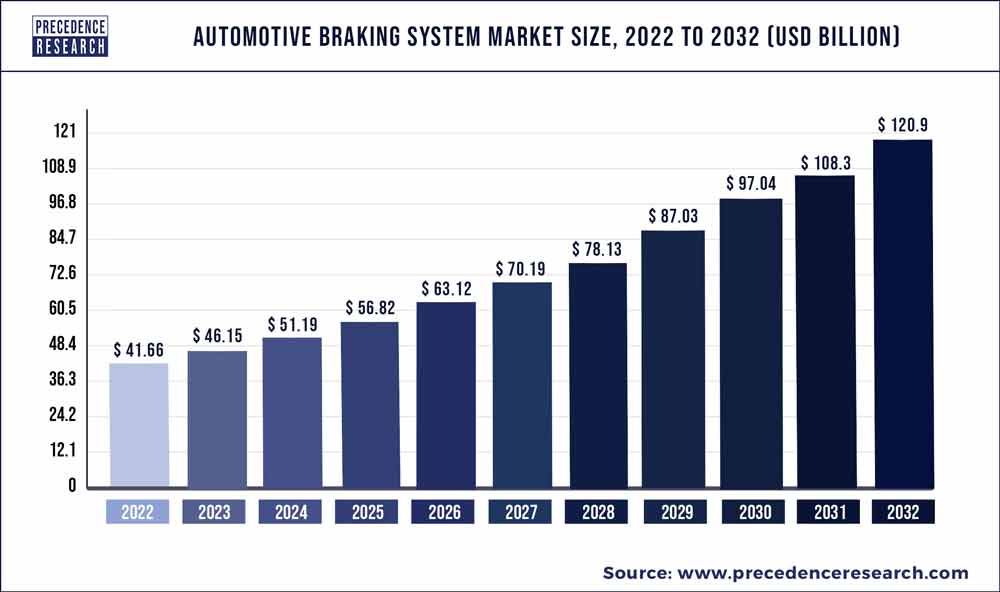 Automotive braking systems have gained significant traction in the recent times due to increasing requirement for advanced technology automotive brakes in passenger as well as commercial vehicles. Increasing number of road accidents across the globe has forced governments along with international organizations to pass stringent safety norms, thereby leading to boost the demand of advanced braking technologies that include Anti-lock Braking System (ABS). Government mandates have surged the implementation of ABS by automotive manufacturers. In addition, 40 members of the United Nations Economic Commission for Europe (UNECE) have adopted the mandatorily implementation of Automatic Emergency Braking (AEB) systems for vehicles by the end of 2020. The aforementioned factors expected to propel the growth of the market.

However, lack of considerable efforts for reducing the counterfeit of brake-related products estimated to hamper the growth of the market along with compromising the vehicle’s safety.

Disc brakes are expected to witness an escalating demand compared to other types of braking systems available in the market. The demand for disc brakes are higher as it offers shorter stopping distance as well as the brake is more efficient while emergency braking condition. 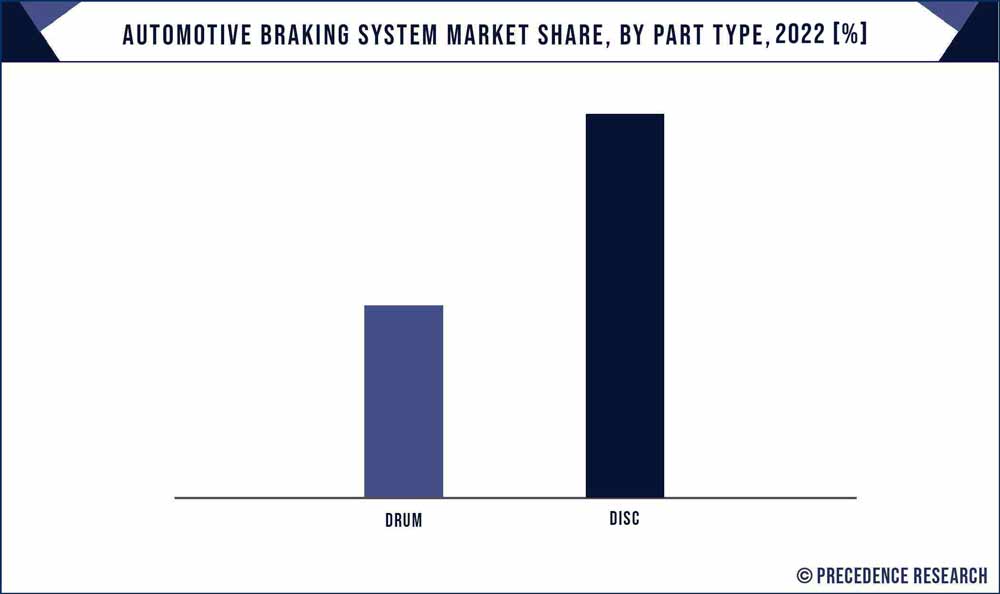 In addition, these brakes allow cooler running and need less external casing. Disc brakes are also prominently used in most of the heavy–duty trucks. Moreover, the integration of front-disc/rear-drum setup that can be mounted on medium and low-priced vehicles projected to fuel the demand for the disc brakes in the coming years.

As brakes are an integral part of every vehicle, the rising production of vehicles along with its increasing demand anticipated to positively influence the market growth. Passenger vehicles captured significant production share of nearly 75%per year that in turn boost the demand for advanced braking system in the passenger vehicle segment. However, demand for commercial vehicles expected to proliferate in the coming years because of accelerating growth of logistics and transportation industry. For instance, demand for SUVs has increased in North America primarily for its application in off-terrain activities, thereby creating numerous opportunities for the automotive braking system market in the region. 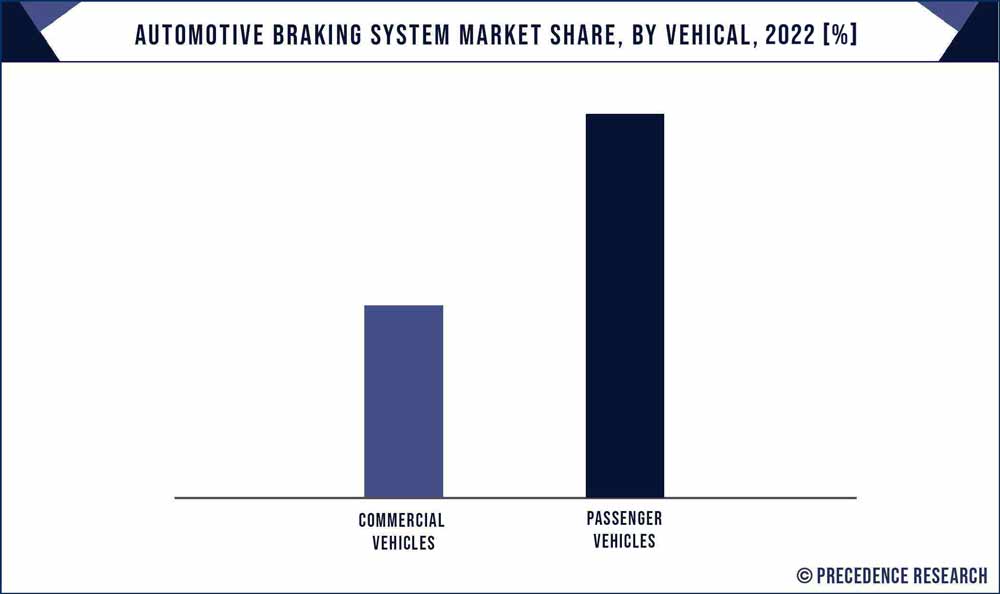 Moreover, the government of U.S. has invested prominently in the development of logistics &infrastructure that has triggered the demand for commercial vehicles in the country. Further, rising implementation of automotive braking system in coaches and buses as well as in other heavy commercial vehicles for high efficiency and better brake response predicted to surge the demand of braking technology in commercial vehicle segment during the forecast period.

On the regional front, the Asia Pacific led the global automotive braking system market. This is attributed to the low production cost along with rising demand of transportation in countries such as China and India. Furthermore, increasing penetration of auto parts manufacturers and foreign automakers in this region has created lucrative opportunities in this region.  In addition, significant participation from BRICS nations in trade affairs in China and India expected to boost the growth of automotive braking system market in the regions. 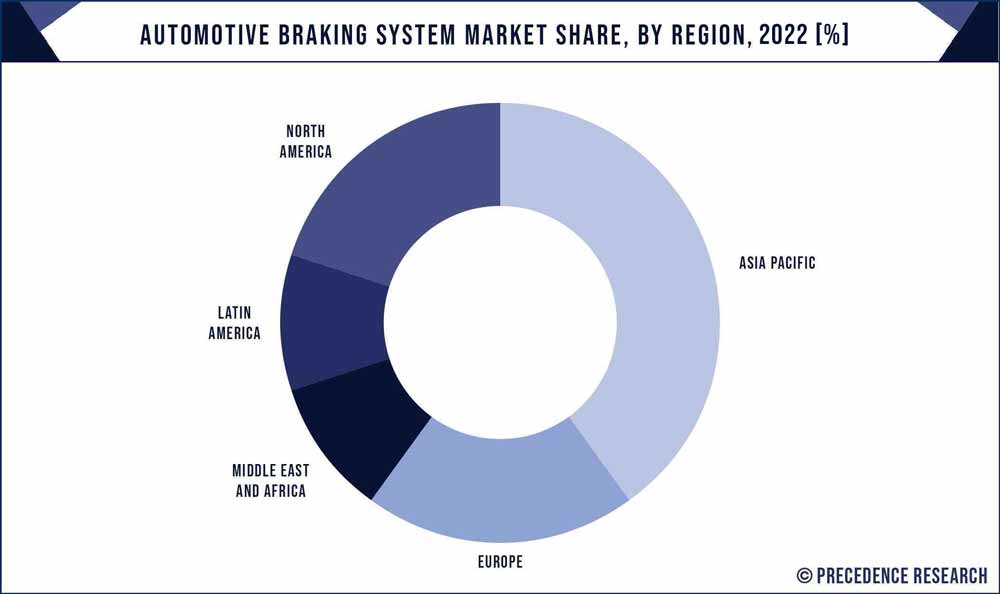 The global automotive braking system market is highly competitive and fragmented with the presence of numerous global and regional players in the market. These players adopt several inorganic strategies to support their growth in the years to come along with strengthening their market position. For instance, in May 2016, Robert Bosch GmbH and Pagani's Huayra BC, based in Italy, have been technology partners for several years and have agreed to jointly develop and test the brake control system of Pagani's Huayra BC. The motive of companies is to test the brake control system under adverse environmental condition such as on the extreme ice and snow terrain.

Certain of the noticeable players in the automotive braking system market include:

This research study comprises complete assessment of the market by means of far-reaching qualitative and quantitative perceptions, and predictions regarding the market. This report delivers classification of marketplace into impending and niche sectors. Further, this research study calculates market size and its development drift at global, regional, and country from 2016 to 2027. This report contains market breakdown and its revenue estimation by classifying it on the basis of vehicle, part type, system type, sales channel, and region: