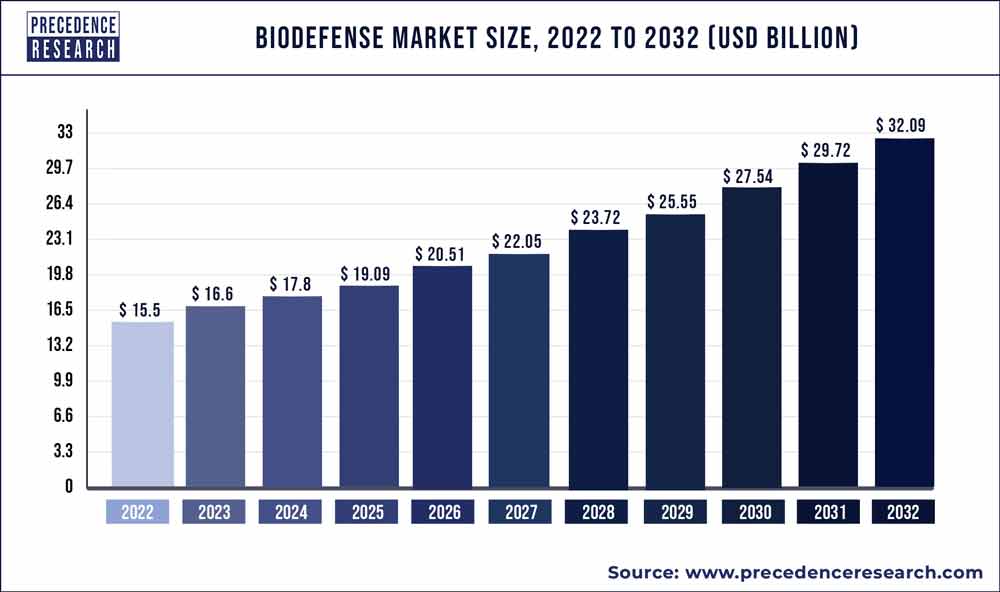 The deadly and naturally occurring viruses can now be easily modified to cause even more harm thanks to recent scientific advancements in the fields of genetic engineering and biotechnology. Furthermore, it is simple to access these organisms, making biodefense an essential component for nations all over the world. Anthrax, botulism, as well as chemical and radioactive agents, have all been employed as biological weapons in the past by bioterrorists to create major economic havoc. These occurrences compelled the creation of biodefense laws, agreements, and regulations by the government in order to defend against biological threats, lower risks, and prepare for, respond to, and recover from bio-incidents.

The National Institute of Infectious Disease has played a crucial role in developing medical products and strategies to counter bioterrorism and emerging and re-emerging infectious diseases by conducting ongoing research to diagnose, treat, and prevent them, whether they are intentional or naturally occurring since the anthrax bioterrorism act that was carried out in 2001 through the mail.

The factors that will drive the growth of the biodefense market include the rise in the number of naturally occurring outbreaks, the existence of supportive government initiatives, the increasing importance of disease surveillance missions to combat bioterrorism, the growing focus of public health services on the development of tests and procedures for the identification of biothreat agents, the growing threat of biological weapons and nuclear-armed ICBMs, and the growing threat of terrorism. Innovative technologies are being adopted widely in the sectors of nanotechnology, forensics, and biodefense-related drug development for the detection of infections, such as gene chips.

Scope of the Biodefense Market

Presence of favorable government initiatives in the U.S.

The growing significance of biodefense

The biodefense market is divided into two segments based on product: vaccinations and biothreat detection tools. The different types of vaccines include those for anthrax, smallpox, and botulism. As opposed to the further classification of biothreat detection tools into detectors/triggering devices, samplers, assays, reagents, and identifiers. Due to increased vaccine production worldwide to stop the spread of numerous diseases, the vaccine category among these held around 64.5% of the market in 2021. The development of the biodefense market will also be boosted by researchers' ongoing investigations into novel vaccination technologies, such as vector technology, that induce quick protection against pathogen attacks. A single oral dose of recently designed vaccines can trigger a long-lasting immune response and can treat a wide spectrum of bioterrorism agents. 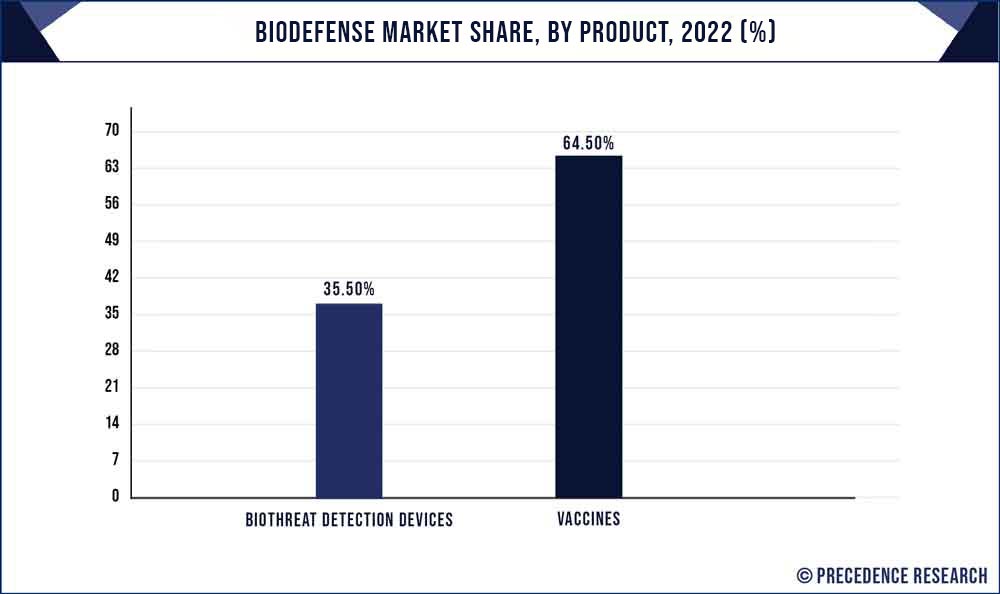 Over the course of the forecast period, the biodefense market's other product segment is anticipated to grow at the greatest CAGR. Viral hemorrhagic fever, cholera, brucellosis, plague, food poisoning, tularemia, influenza, Zika, and Ebola are just a few of the viruses that are included in the "others" category. Since 2003, the Vaccine Research Centre (VRC), a division of the National Institute of Allergy and Infectious Diseases (NIAID), has focused on developing VHF vaccines, particularly those that protect against the Ebola and Marburg viruses. The U.S. Department of Defense (DoD) has given the University of Texas at San Antonio (UTSA) a contract to create a tularemia vaccine. Due to its highly contagious and occasionally lethal characteristics, tularemia has been developed as a bioweapon.

Many businesses are competing to create vaccines as a result of the recent spike in Zika and Ebola virus infections in numerous nations. The vaccine MVA-BN Filo, produced by Bavarian Nordic, protects against the Marburg and Ebola viruses, which are the two most common causes of viral hemorrhagic fever. The firm and the American NIAID have worked together on the vaccine's phase 3 clinical studies.

Due to the growing significance of biodefense and the growing danger posed by dangerous biological elements, the North American biodefense market, which accounted for over 41% of global revenue in 2021, is expected to expand significantly over the next years. Furthermore, with established vaccine production facilities, the United States has one of the most sophisticated biodefense markets in the region. The U.S. government also carries out a number of activities that aid in enhancing security against bioterrorism threats. The government plans a number of biodefense initiatives, including a program to combat infectious diseases including the pandemic flu. The regional market predictions will be boosted by other variables including expanding consumer awareness of biodefense and growing acceptance of technologically sophisticated products.

To help response efforts and improve readiness, many governments have been working with a number of international partners. For instance, the World Health Organization and DRC MoH have approved the experimental single-dose Ebola vaccine [rVSV-ZEBOV-GP] for safe usage. As of November 17, 2019, roughly 250,000 people who are at risk for contracting Ebola have received the vaccine. Many companies, including Bavarian Nordic and Ology Bioservices, are conducting research on the Ebola and Zika viruses in nations with weak medical infrastructure and little research capacity. Developed economies are contributing aid to these nations. In order to increase funding for acquiring, creating, and utilising medical countermeasures against biological, chemical, radiological, and nuclear (CBRN) warfare weapons, the Project BioShield Act was introduced. The market for biodefense is anticipated to expand as a result of the aforementioned factors as well as the increased risk of the prevalence of infectious diseases.