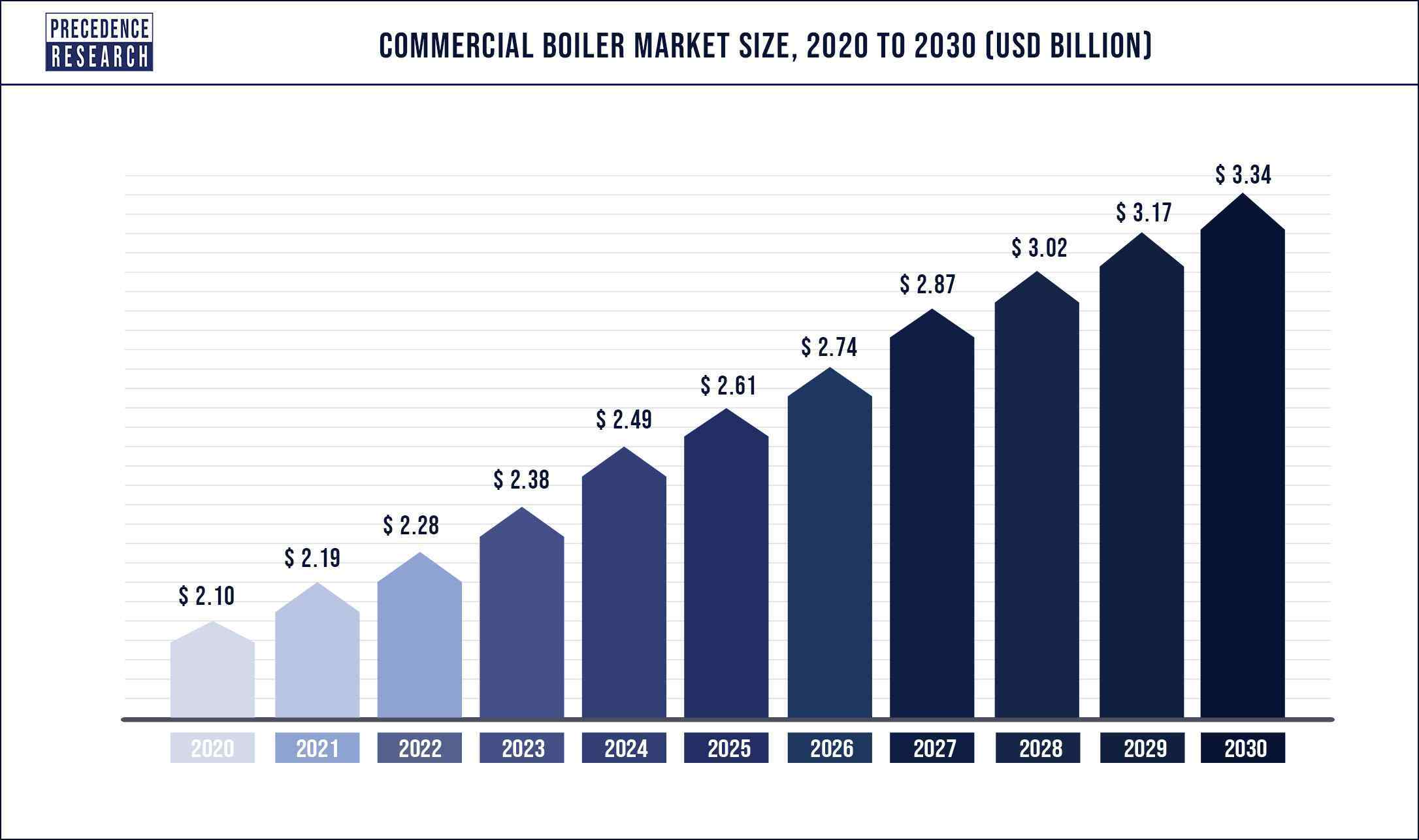 The commercial boilers are pressure systems that heat water for building heating by burning combustible fuels or using electricity. Some boilers use hot water directly, while others use steam-generated water. The heat exchanger transfers heat from the burners or electric coils inside the boiler to the water. The combustion chamber, heat exchanger, burner, and other components make up a commercial boiler. The expanding demand for commercial boilers has been fueled by the growing preference for cost-effective heating systems in commercial enterprises around the world.

The natural gas is utilized more frequently in commercial boilers than solid fuel because natural gas enhances overall efficiency and minimizes dangerous gas emissions. As a result, the government is encouraging the use of natural gas-fired combustion boilers.

Although the regulatory standards enforced at the federal, state, and municipal levels frequently overlap and differ, this impacts the market growth. And, as the government continues to tighten down an emission from commercial boilers, it’s more crucial than ever for businesses and organizations to ensure that their systems are up to standards.

The commercial boilers market is influenced positively by a demand for energy efficiency in the commercial sectors. The key market players are interested in solutions that will save them money in the long run while also addressing a wide range of requirements. The combustion, controls, and thermal efficiency are all being improved.

In addition, the commercial boilers market is continuing to expand its product offerings into new areas. A large portion of this drive is due to the healthcare business in particular. The industry experts predict that the commercial boilers industry will expand significantly in response to rising demand for hot water in these facilities, as well as linens and cleaning.

Region wise, the expansion of commercial boilers market is also taking place. The key market players are moving to address the growing demand for boilers in polar climatic regions around the world in recent years.

Scope of the Commercial Boiler Market

Based on the fuel, the natural gas dominates the commercial boiler market during the forecast period. Natural gas is utilized more frequently in commercial boilers than solid fuel because natural gas enhances overall efficiency and minimizes dangerous gas emissions. As a result, the government endorses the use of natural gas-fired combustion boilers.

On the other hand, the coal is expected to grow at rapid pace during the forecast period. The coal is substantially less reactive than gas or atomized oil since it is a solid fuel. Furthermore, the ash content of coal, which is commonly used in utility boilers, is 200 to 1000 times of oil per British Thermal Unit (BTU) of heat provided.

Based on the technology, the non-condensing segment dominated the market with highest market share during 2020. A non-condensing boiler features a single heat exchanger chamber through which hot gases from the burner flow to heat the water within the exchanger’s walls before existing through the exit flue.

On the other hand, the condensing segment is fastest growing segment in the commercial boiler market. The energy bills and a smaller carbon footprint are the two main advantages of utilizing a condensing boiler. As condensing boilers are so much more efficient than traditional boilers at converting fuel into useful heat, one can use less fuel to heat water.

Based on the region, the Europe segment dominated the global commercial boiler market in 2020, in terms of revenue and is estimated to sustain its dominance during the forecast period. The majority of building constructions in the UK, such as healthcare facilities and educational institutions, rely heavily on low-pressure heating systems.

On the other hand, the North America is estimated to be the most opportunistic segment during the forecast period. Due to strong expansion in the industrial sector and attempts to minimize emissions in the region, the North America is becoming an emerging region in terms of commercial boiler use.

The various developmental strategies such as business expansion, investments, acquisition, new product launches, partnerships, joint venture, and mergers fosters market growth and offers lucrative growth opportunities to the market players. The major market players are investing in technological developments across their boiler technologies in order to meet the needs of the end users, implying a rise in market share. The increasing R&D spending, as well as strategic partnerships and alliances are some of the primary methods used by leading industry players to achieve a competitive advantage in the market.

Some of the prominent players in the global commercial boiler market include: