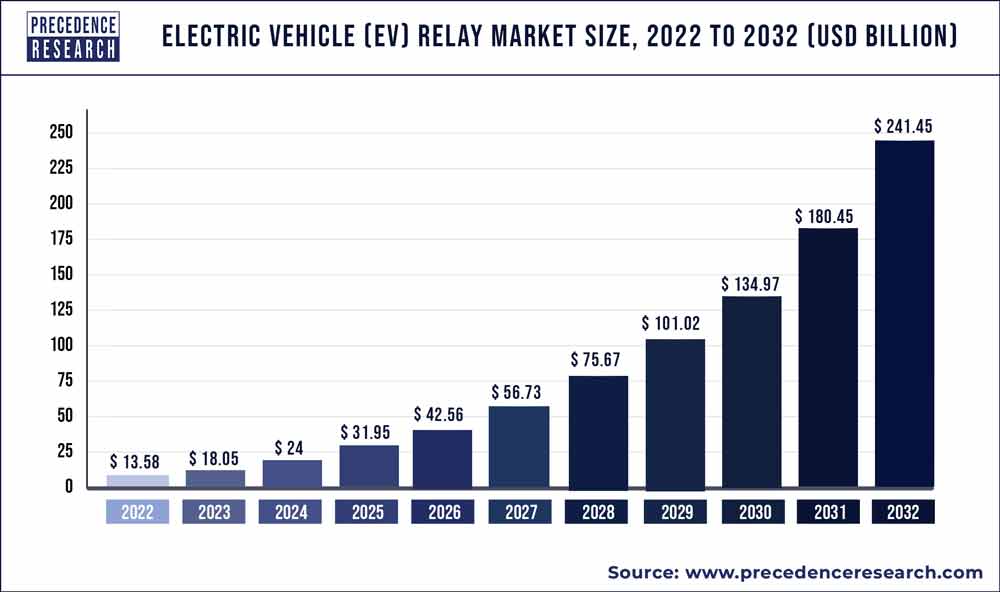 Relays are essential components in car electronic segments. EV Relays provide automobiles with a variety of electrical functions. The downsizing of relays is a significant market driver since larger current loads may fit into a tiny device that is compact and takes up little space. Even though it offers additional functions, it retains the vehicle's overall appearance. EV Relays are also thought to be safe due to the fact that they are housed in a sealed capsule. They are also dustproof and waterproof, and are encapsulated in hydrogen gas to prevent contact oxidation. Because most automobiles are now electronic rather than manual, the average number of relays per vehicle is likely to rise. This is yet another market driver.

The EV Relay Market is expanding as electric vehicles become more popular. Because of increased environmental concerns, this industry is likely to develop throughout the projection period. Governments have taken steps to encourage electric cars in order to reduce pollution and dangerous gas emissions. Individuals' spending power is increasing; hence the premium automobile market is expanding. As most luxury automobiles have advanced feature this is a driving factor in the EV relays market's growth.

The average amount of software and electronics per car is quickly increasing as the automobile industry transitions from hardware to software-oriented vehicles. Electronic devices with a wide variety of application areas such as safety management, engine, comfort, and infotainment that use automotive relays are used to integrate new features into automobiles. This is expected to boost market demand during the forecast period.

Another key aspect driving the introduction of automated technologies in autos is passenger safety. Over the previous few decades, automobile safety measures have significantly reduced road accidents and fatalities. In addition, the car sector is aiming to improve consumers' driving experiences. Smarter automobiles that can self-diagnose are gaining popularity and are expected to drive market expansion throughout the projected period.

Because of the fast development of new technology, the automobile sector is expected to undergo a few structural changes in the near future. Artificial intelligence (AI) and machine learning (ML) will dramatically improve accuracy, robotic efficiency, and consistency in the manufacturing process. Level 2 automation, which includes active safety systems and driver assistance, enables OEMs to offer appealing features and increase revenue growth in the Electric Vehicle Relay Market.

Limited supply of fossil fuels: Due to the scarcity of fossil fuels, several governments and significant corporations are looking for alternative renewable resources. This has resulted in automobiles fueled by electricity, CNG, LPG, LNG, and other alternative fuels. This aspect is also likely to increase the estimated profit margin for this market throughout the forecast period.

Infrastructure development: Infrastructure development is one of the critical aspect for the widespread use of electric cars. Several corporations are investing in this sector, with plans to deploy millions of additional charging stations around Europe by 2020. This would help minimize customer range anxiety and encourage expansion in the EV relay industry.

The heating application category held the biggest market share of more than 41% in 2021 and is expected to rise significantly during the forecast period. The increased need for energy-efficient solutions with improved performance will boost relay product adoption across a wide range of applications. EV Relays are used in electric cars to prevent against short-circuit and open-circuit events that, if exposed to high voltage, might damage the vehicle's electrical system or cause injury. 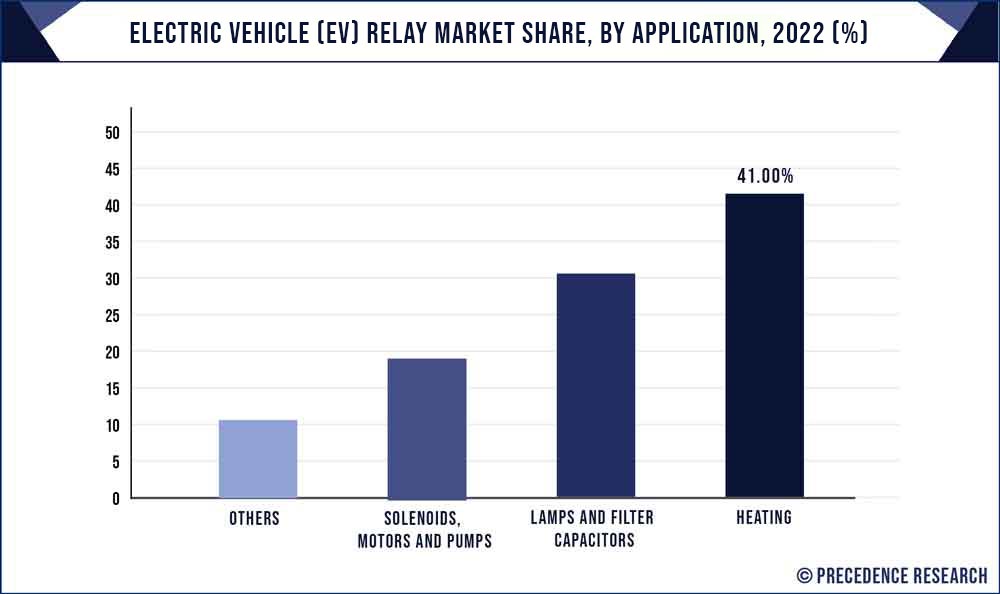 Furthermore, as compared to conventional systems, these devices help minimise power consumption by providing regulated switching between two states, which reduces engine load. These factors are expected to fuel industry growth during the forecast period, particularly in Europe and North America, where demand has been steadily rising due to increased EV production, rising consumer awareness about improved driving experiences, and environmental benefits associated with lower carbon emissions from automobiles manufacturing plants globally.

The PCB relay is expected to hold the biggest market share in this industry. It's found in a wide range of electrical applications, including ABS, cruise control, power steering, doors, power windows, and sunroofs. They are widely utilised in places such as Europe and North America. However, in places such as Asia-Oceania and the Rest of the World, Tier-1 manufacturers and OEMs continue to choose plug-in versions.

Plug-in relays are employed in situations where the switching function must be conducted in the presence of high vibrations, temperatures, and voltage changes. They are found in fuel injection systems, heating, ventilation, and air conditioning (HVAC) systems, as well as switching fuel pumps. These components are in high demand because of their small size, which saves a lot of room in the junction box. This phenomenon, in turn, aids in the reduction of the junction box's overall weight. The increasing use of electronic control modules in conjunction with electronic components has created a demand for smaller devices capable of bearing higher current loads.

In 2021, the market for global electric passenger car relay market was worth more than USD 6.5 billion. Many governments make significant offers to encourage the sale and use of electric vehicles.

Many European governments use incentive-based schemes to promote electric vehicles. Countries such as Germany and Austria provide tax breaks and reductions. France and the United Kingdom provided EV owners with incentive payments and insurance reductions. The electric vehicle sector is expected to increase the most compared to other categories throughout the projected period. Many governments make significant offers to encourage the sale and use of electric vehicles by offering Tax benefits to the customers at the time of purchase. Furthermore, the scope of the exemption is determined by the size of the batteries used in the vehicle.

Over the projection period, Asia Pacific region has accounted 41% revenue share in 2021 and is estimated to be the fastest-growing regional market. The increase might be ascribed to rising electric car sales in China and India. Furthermore, favourable government policies like as tax breaks and subsidies are projected to promote EV demand in nations such as Japan, Taiwan, South Korea, and Indonesia. Due to strong demand from main application areas such as heating and cooling systems, lights and filter capacitors, and solenoids motors and pumps, Europe accounted for a considerable proportion of the worldwide EV relay market. North America is also expected to increase significantly over the next several years as OEM adoption rises and customer awareness of environmentally friendly automobiles grows.